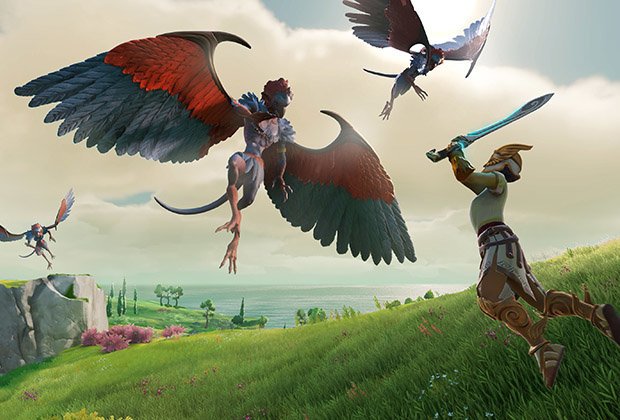 In fact this was the version we were treated to and although there were some technical difficulties we got a healthy insight into how Gods & Monsters is shaping up.

The easiest comparison to make is with The Legend of Zelda: Breath of the Wild. Gods & Monsters is an action adventure game that offers cinematic, over the top combat while rewarding those who explore its dense open world with challenging puzzles and traversal.

The major difference here is its focus on Greek mythology. With Assassin’s Creed Odyssey having been such a major hit for Ubisoft, it should come as no surprise that its developers are still passionately digging into its lore for more stories and ideas.

Gods & Monsters will see legendary storyteller Homer narrate fantastical tales to his grandchildren. The game has a somewhat cartoony look to it with a hand painted art style. It’s also much more accessible than Odyssey in terms of themes, dropping all mature content to focus purely on the player’s adventures.

The brief demo we were shown had the player character named Phoenix (who can be fully customised, by the way) wandering across grassy plains before fighting a bird-like creature using their bow.

Again, it’s hard not to compare Gods & Monsters with Breath of the Wild though this is something Ubisoft isn’t trying to shy away from.

The last time the publisher went for a wider, more accessible approach was with Starlink: Battle for Atlas.

When asked, the lead developers confirmed that Gods & Monsters won’t have any kind of “toys to life” element, focusing purely on the game itself which we can expect to see more of in the coming months leading up to its February 2020 launch.