Tim Drake (aka Robin) might be a crime fighter in Gotham Knights, but he's also a student. As such, he needs to find time to do some class projects alongside his vigilante activities. One project, in particular, is about street art.

Early in the game, he emails the rest of the bat family and explains that he requires help with the research. So, he asks them to scan any cool murals they find. Unsurprisingly, this serves as a collectible in the game. And if you find and scan all of them, you get the Claiming The Mural High Ground achievement or trophy. Here are all of their locations.

Faces Of Gotham (The Cauldron) 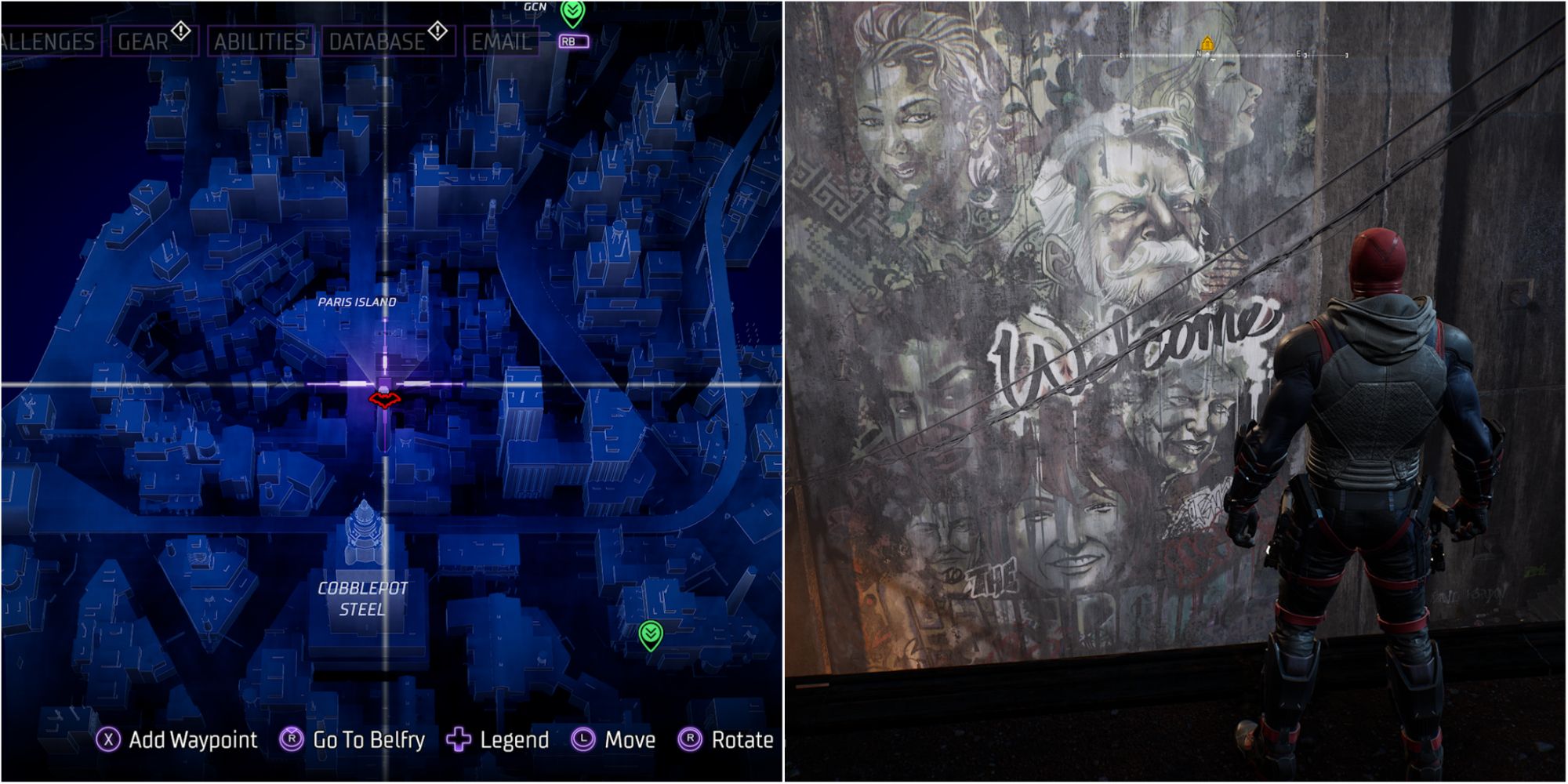 While most regions have one piece of street art to find, The Cauldron has two. One of them is called Faces of Gotham, and it is located in the center of the area. It's within Paris Island on Harrow Road. 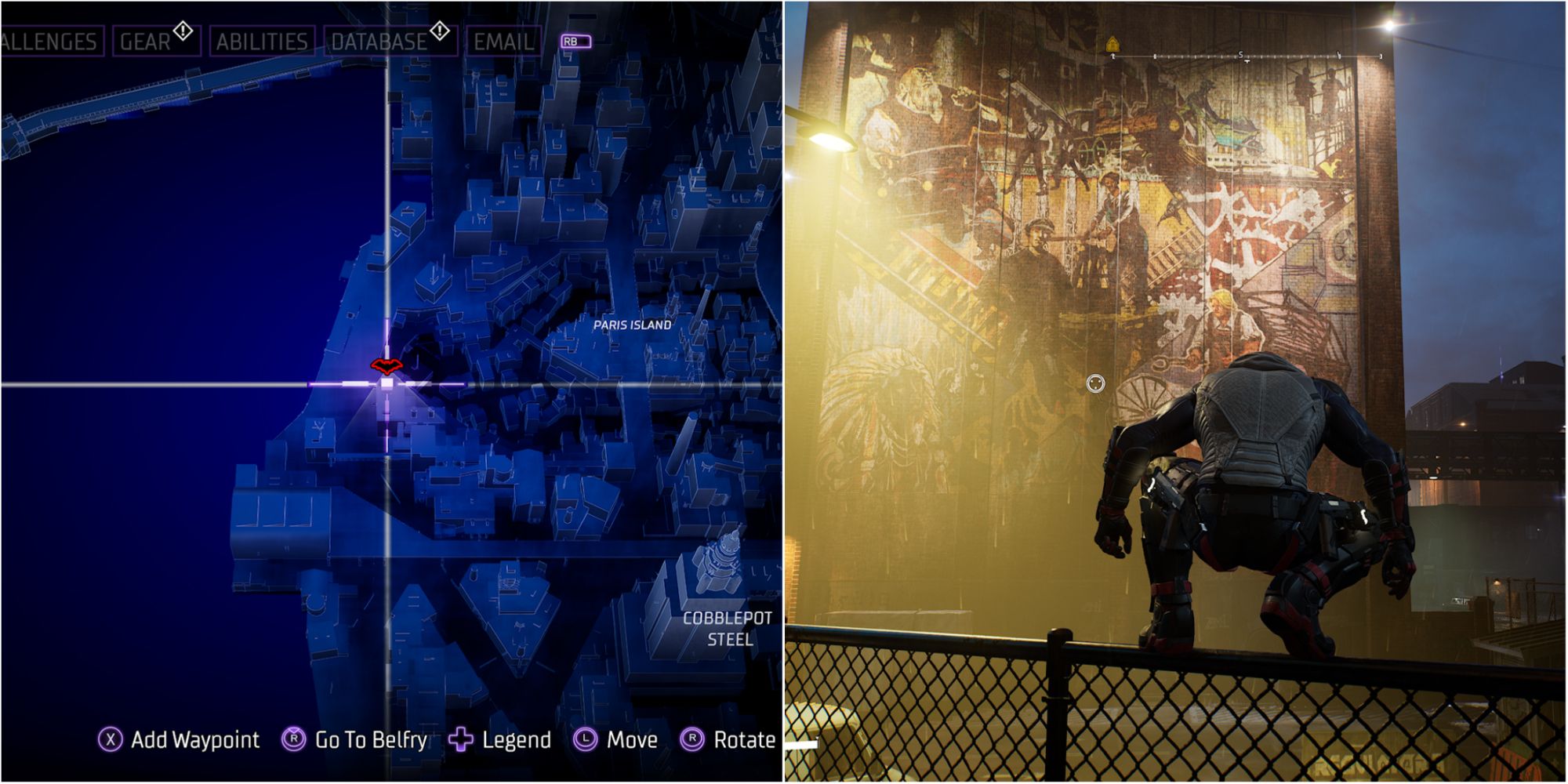 The other mural in The Cauldron is on the western side of the region, near the water. It is just above Diangelo Avenue on the outside of a building. 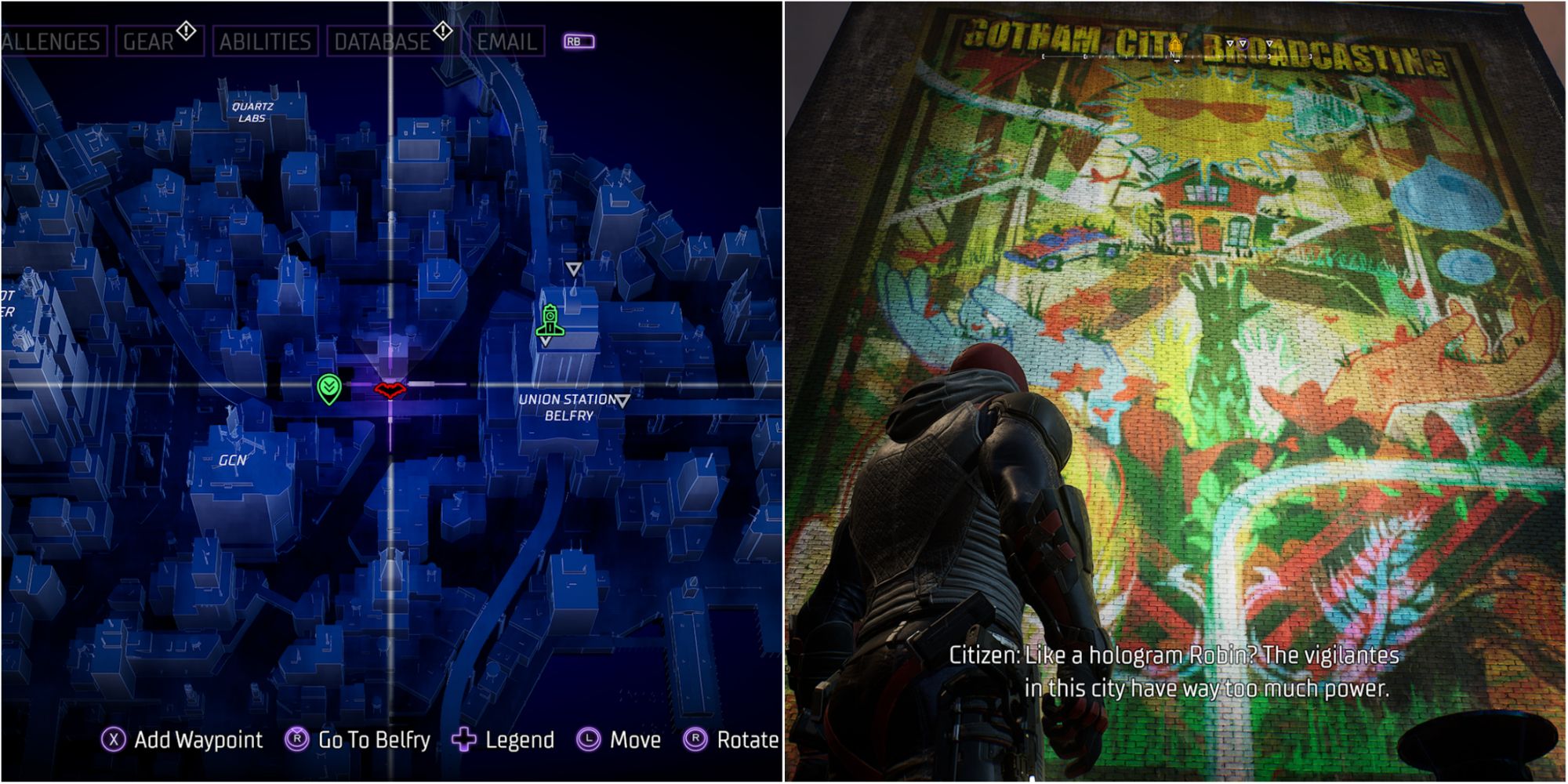 Now to the Financial District, which is where the Belfry is located. Speaking of your hideout, the mural is just across the street from it to the west. This one is not at ground level. It is above a Pizza place, so you need to grapple up to it – it's about level with the train tracks. 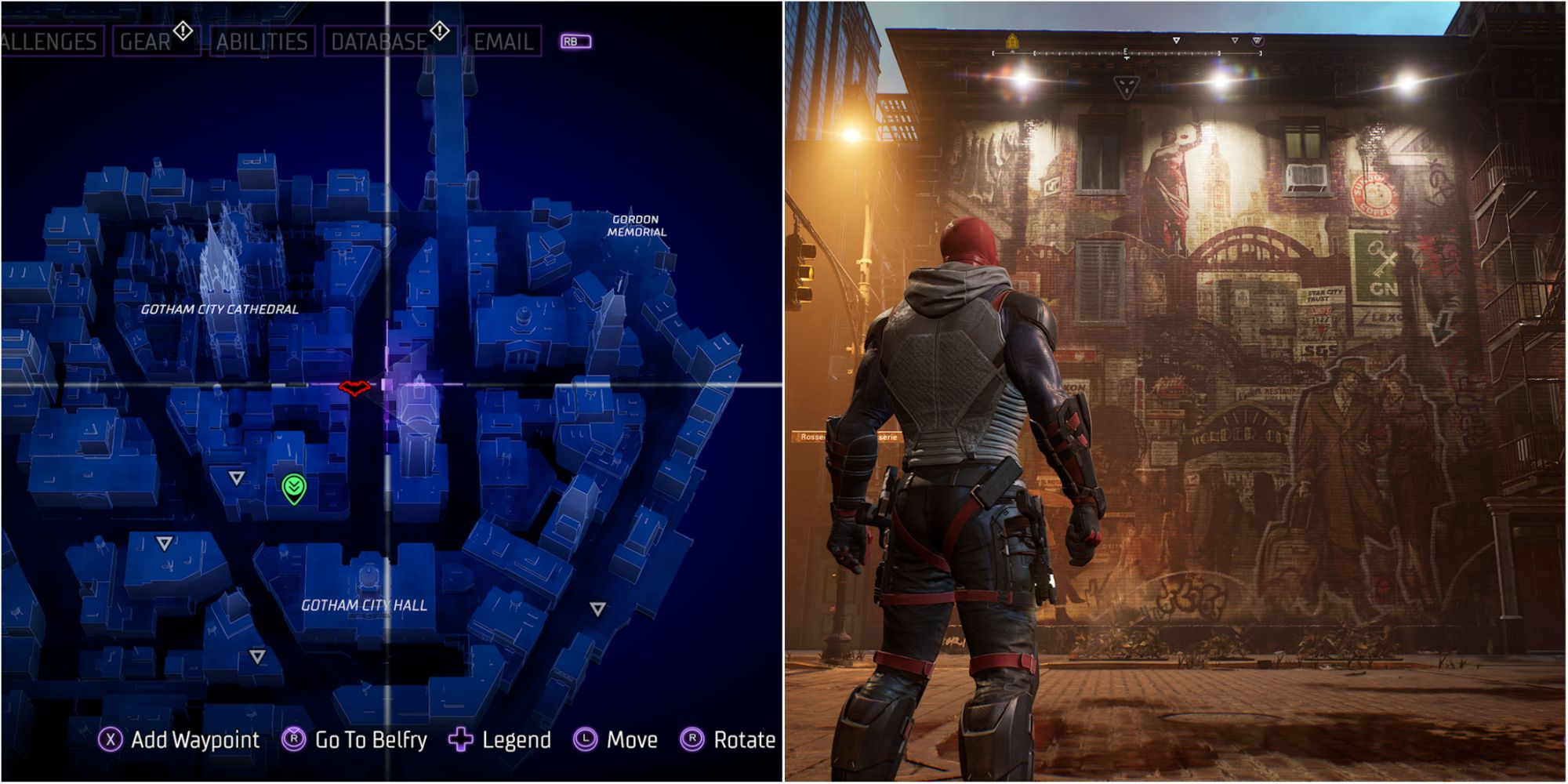 The next piece of street art is in Old Gotham. More specifically, it is slightly east of Gotham City Cathedral on Rosserie Street. This one is not very hidden, as it's just on the side of a building, next to a road. 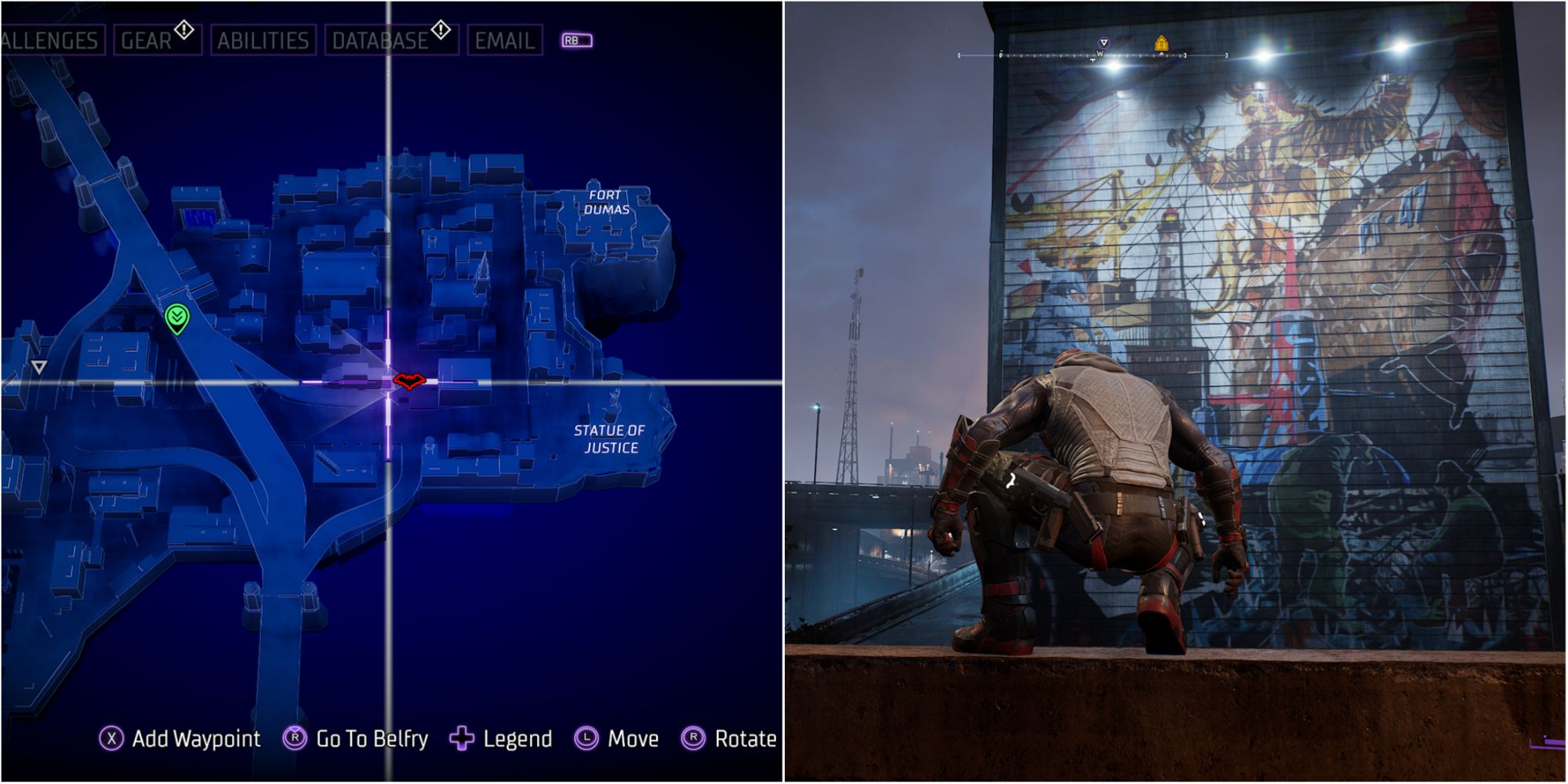 There is a mural to find on Tricorner Island. It is sat between Hawkins Avenue and St. Adrian Avenue, near the Robert Kane Memorial Bridge. It is next to a road. You just need to hop over a little fence to get to it. 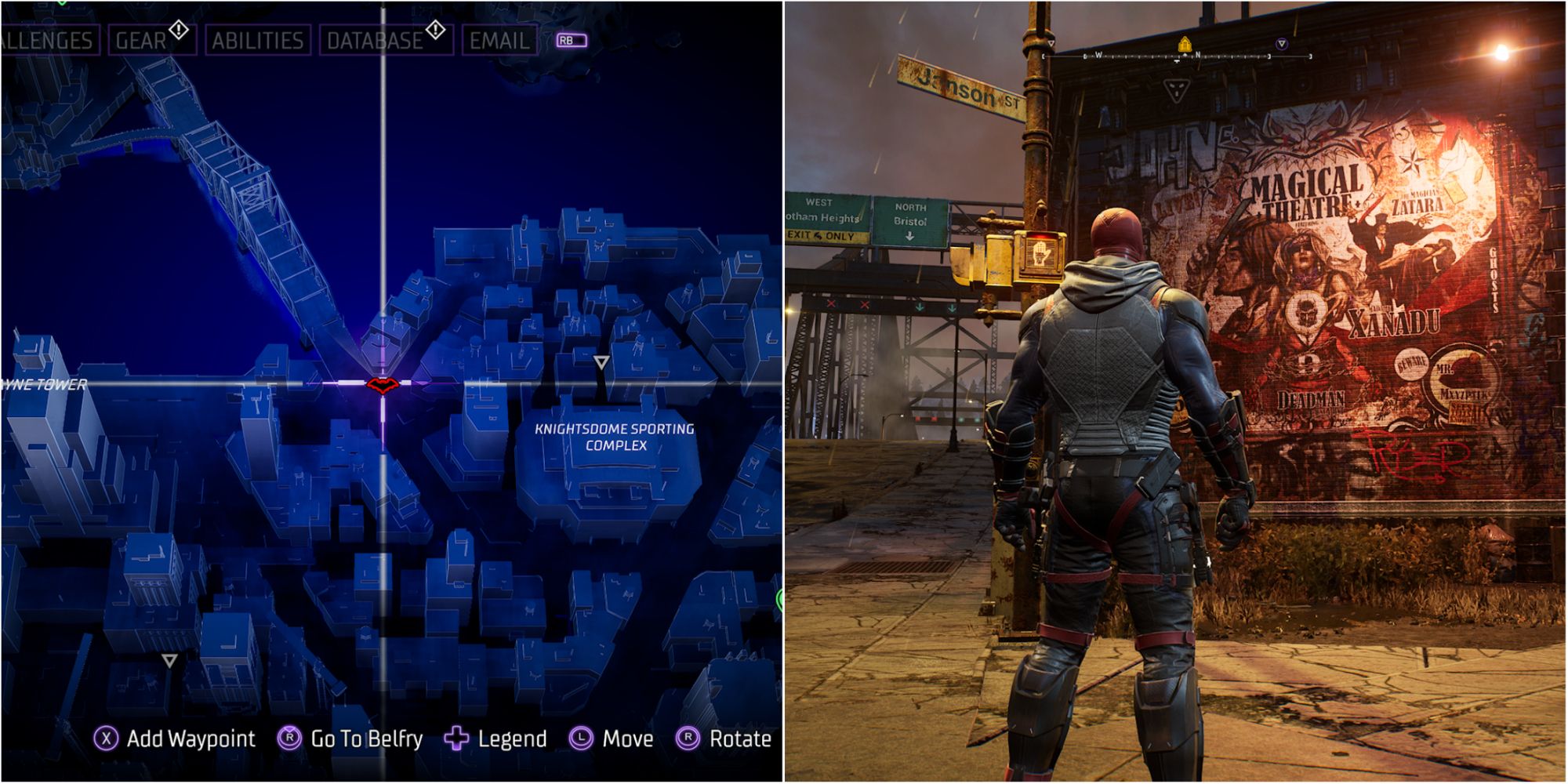 The street art in the Bowery region is in the northwestern part of it, next to the Robbins Bridge. In fact, the mural is directly next to the end of the said bridge on Janson Street. 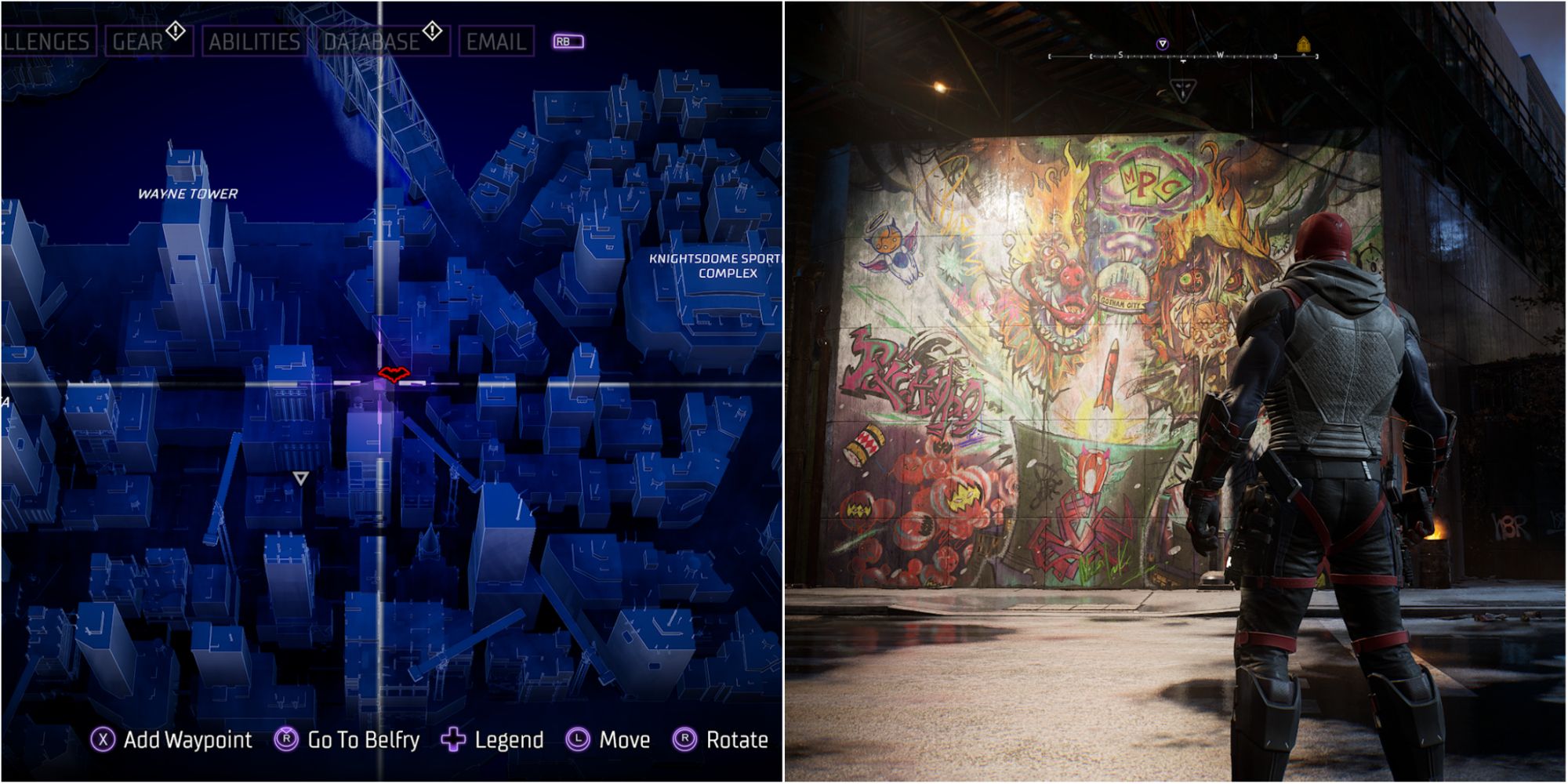 This mural is virtually on the Otisburg and Bowery border to the point where you have to zoom in to discover it isn't in Bowery. You can find it on Gardner Street. It's underneath the train tracks and fairly close to Wayne Tower. 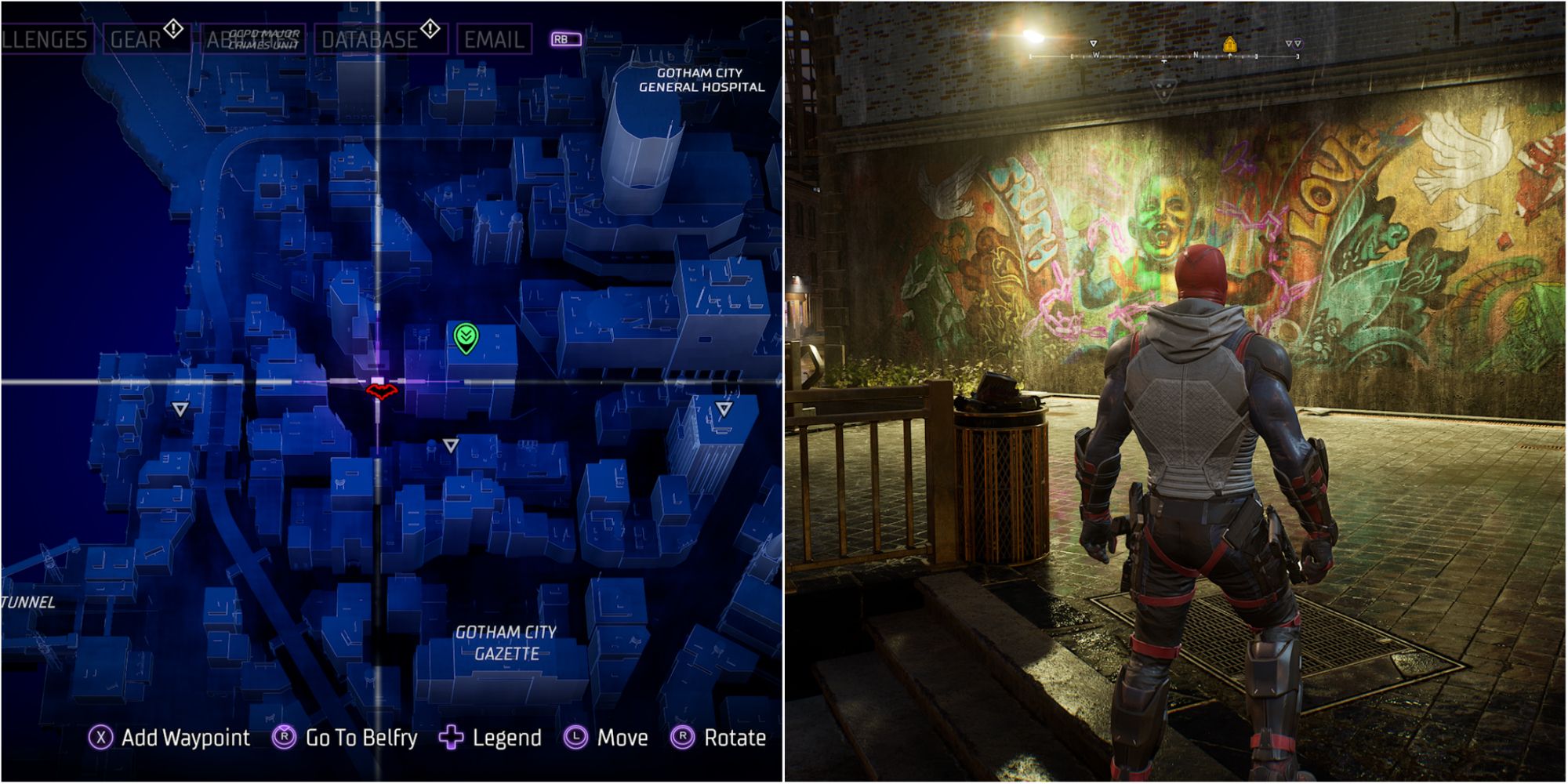 The Born This Way mural celebrates all types of love. So, it's no surprise the artwork sits in an area filled with pride flags. You can find the piece of art on the corner of Grant Lane and Croydon Avenue, next to a road. 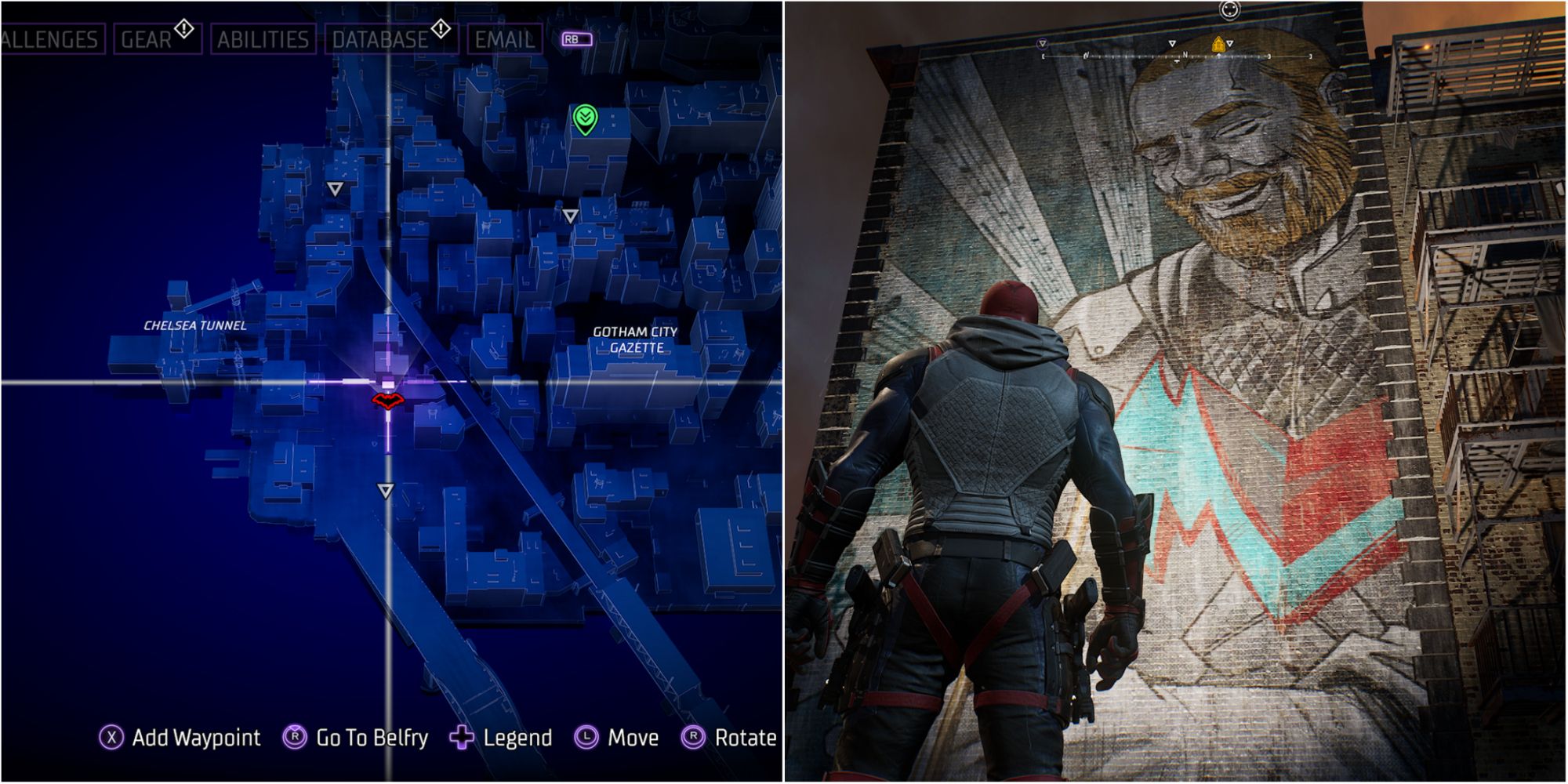 There's another piece of street art in the West End area, which is a bit further south than the Born This Way one. This piece is between the Chelsea Tunnel and the Gotham City Gazette. You won't find it at street level, you need to grapple up above the Blasdell Gas Station. The art is dedicated to Joel Bloomer, who worked on several Warner Bros. games. 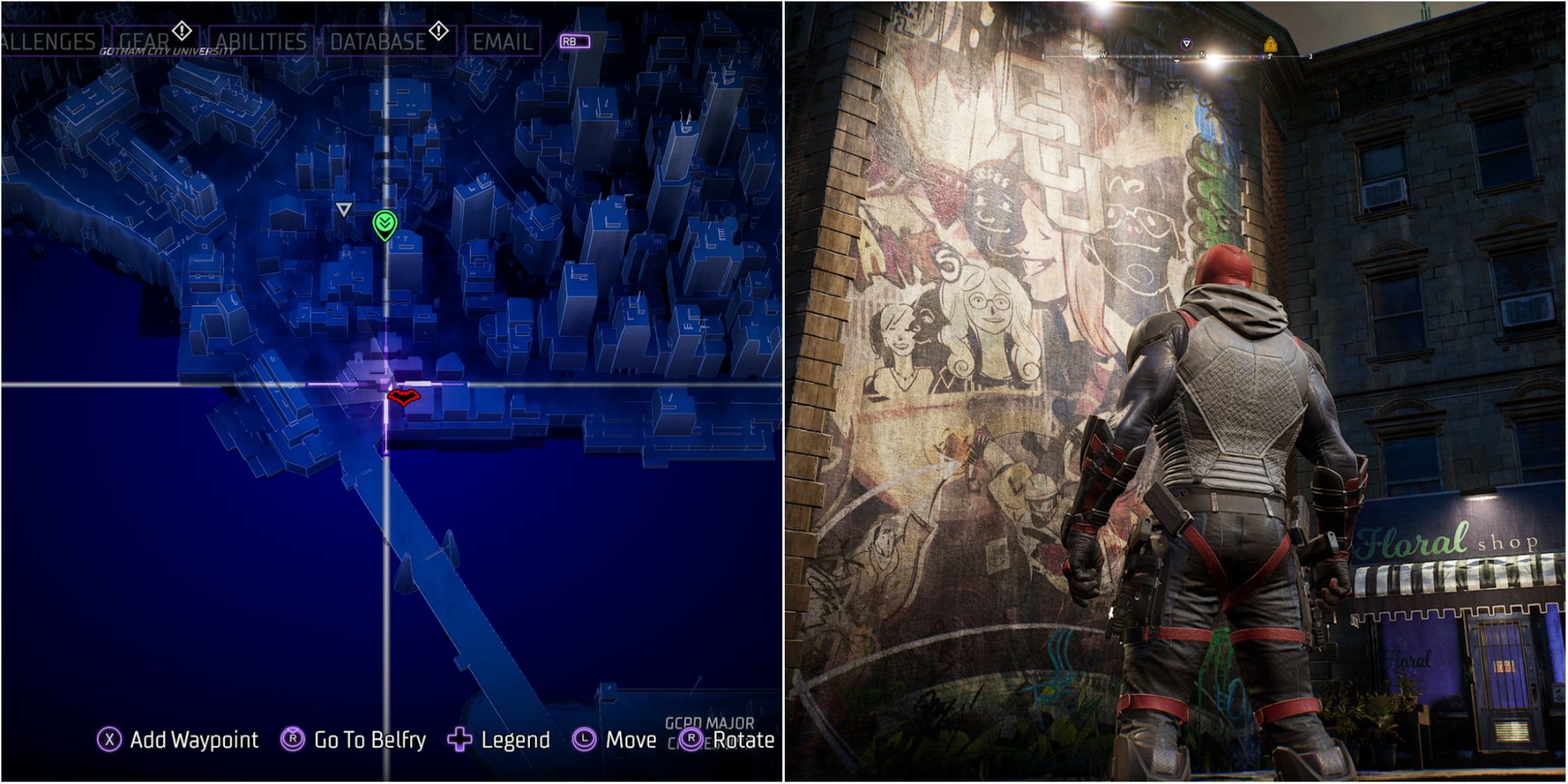 The mural celebrating Gotham City University is near the southern entrance to Gotham Heights at the end of Aparo Bridge. It is down a little street called Bridge Lane and sits beside a Floral Shop.

The March Of Crabs (Robinson Park) 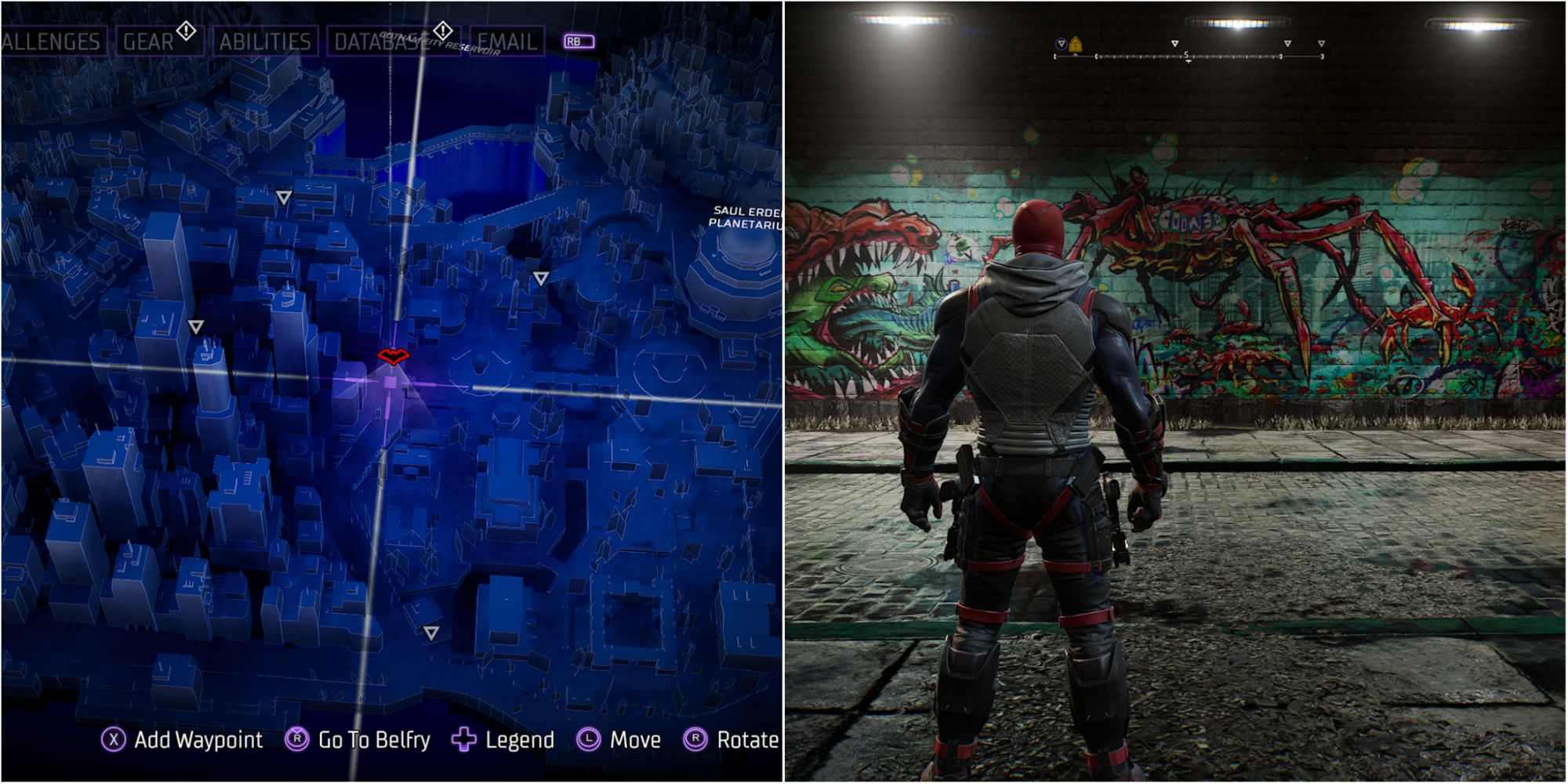 This one is directly on the border between Gotham Heights and Robinson Park. The artwork is well-hidden, as it's directly underneath Chambers Street on Shelley Avenue. 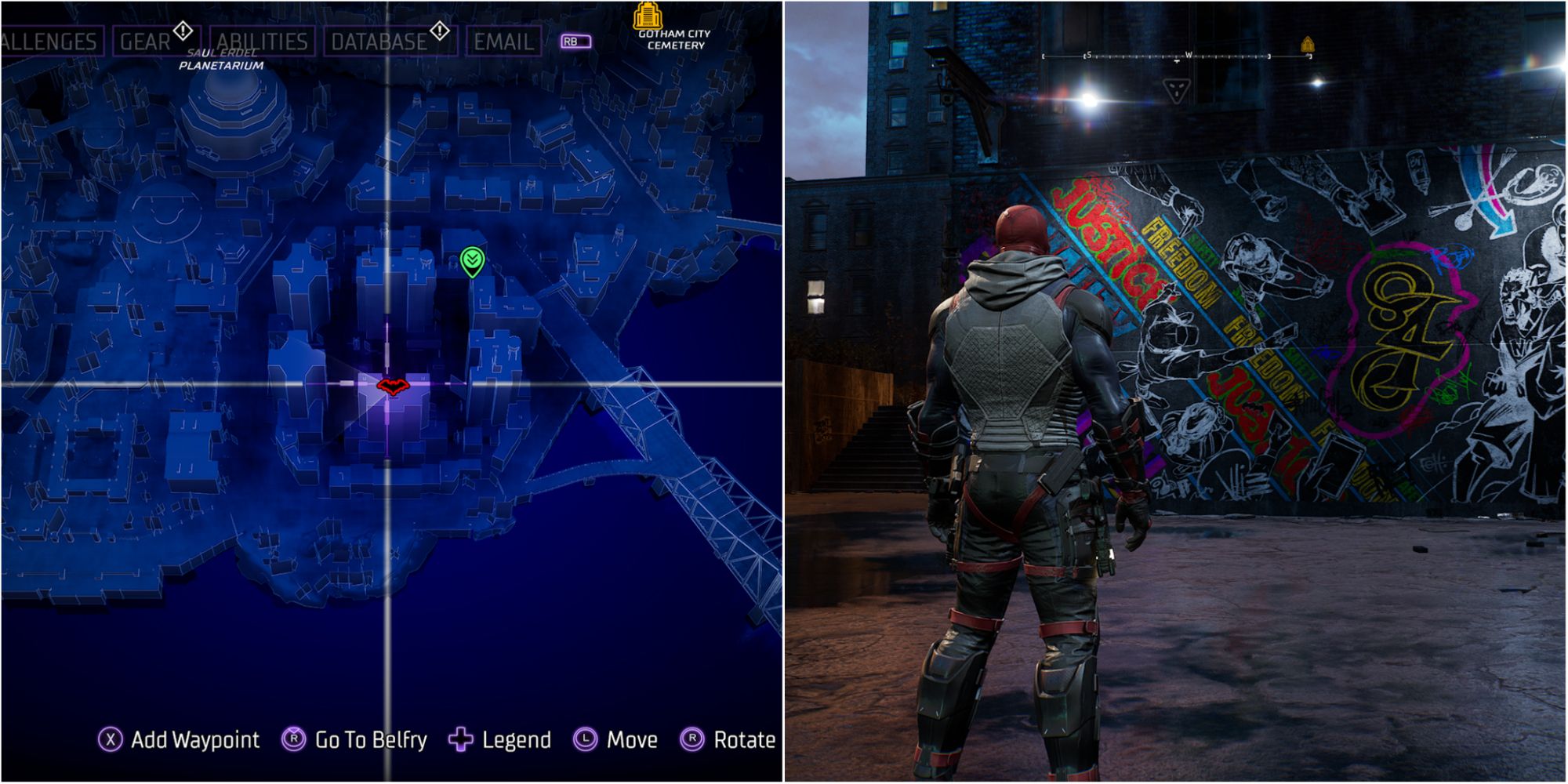 You can find the See Us mural within the large apartment complex area in Bristol. It's in an area that contains a basketball court and some benches.