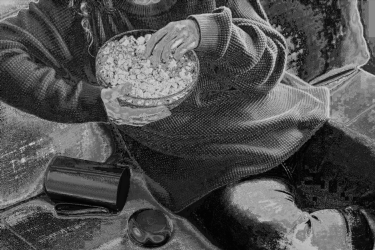 HTC has revealed more teaser images ahead of its Vive Flow announcement later this month.

This time the images come from the October 14 announcement event’s website. They all feature the same cylinder object we saw in the first image earlier this week, sometimes turned on its side, sometimes with the lid on, sometimes off.

It certainly seems like this device could be a container of some sort – closer looks seem to suggest it’s hollow inside and the only image in which we see someone’s head is the one where the container is closed, presumably with the device stored inside (ie: not on the user’s head). Like last week’s laptop image, the popcorn image might also suggest the user can see the real world too.

It’s very possible that Vive Flow is the device that fits inside that container and, if that’s the case, we’re likely looking at some sort of lightweight wearable. It seems doubtful that HTC’s concept lightweight VR headset, Project Proton, would be ready for a container of this size, but perhaps we might see HTC’s own take on smartglasses or an AR device that links up to a smartphone, similar to the Nreal Light.

We found a Vive Flow trademark following the teaser earlier this week so the stars seem to be aligning. Would any new hardware from the company be another part of its enterprise efforts? Or could there be a consumer angle to it too? What do you think Vive Flow will be? Let us know in the comments below!