Join gaming leaders online at GamesBeat Summit Next this upcoming November 9-10. Learn more about what comes next.

The new IMG CXT will bring desktop-quality visuals to mobile devices, said Kristof Beets, vice president of technology insights at Imagination in an interview with GamesBeat. That means you’ll be able to play cool games in your and on your smartphones.

Photon is the industry’s most advanced ray tracing architecture, Beets said, and it has already been licensed for multiple markets.

“We’re aiming to deliver solid gaming experiences, high-quality visuals, and enough throughput for a variety of different markets,” Beets said. “So it’s not just mobile but also it’s focus on the growing laptop and server space based on the high power efficiency of our solutions. We’re focusing on the good performance within the power budget.”

The company hopes to compare favorably to Nvidia and AMD with its high efficiency. The company has been working on early prototypes of chips that it showed as early as 2014. It has full Vulcan support. One of Imagination’s key partners is Apple.

“We hope to gain a foothold in the mobile premium space,” Beets said.

Pioneered by companies like Nvidia, ray tracing introduces a step-change in graphics realism. But that’s on the PC platform, while Imagination is targeting much smaller devices where power consumption is a big deal.

By imitating how light behaves in the real world, ray-tracing GPUs make it possible to create 3D scenes that are near indistinguishable from real life. Due to its computational complexity, ray tracing has only recently come to desktop PCs and gaming consoles, but thanks to IMG CXT’s revolutionary Photon architecture, mobile developers and gamers are also now able to take advantage of this rendering technology with full hardware acceleration, Beets said. 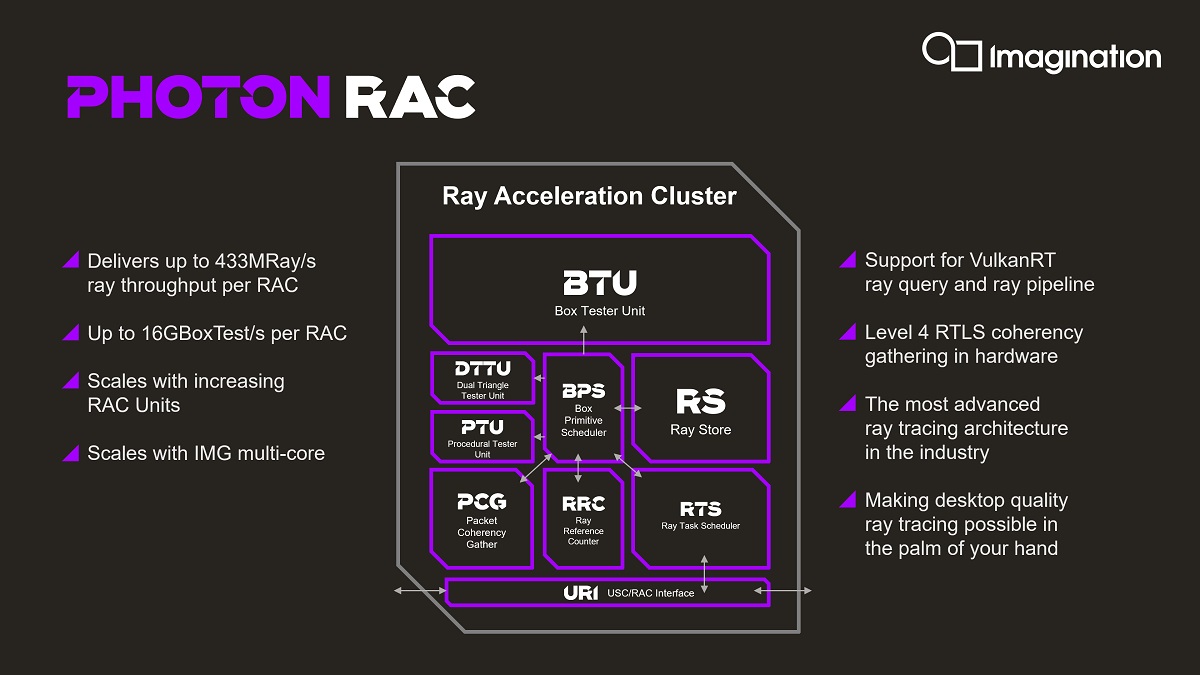 Above: Imagination Technologies’ design for the Photon RAC part of its GPU.

The Photon architecture represents a decade of development in making ray tracing viable in low-power-enabled devices and delivers a major leap in the visual possibilities for smartphones, tablets, laptops, and automotive solutions, Beets said.

Ray tracing can be performed with varying levels of performance and efficiency and to highlight this Imagination established the Ray Tracing Levels System (RTLS), identifying six levels of ray tracing, from Level 0 to Level 5. The Photon architecture inside IMG CXT sits at Level 4 of the RTLS, making it the most advanced currently available, enhancing ray tracing performance and efficiency to deliver a desktop-quality experience for mobile gamers and developers.

Photon for PC and datacenter

The Photon architecture can be scaled to the cloud, datacenter, and PC markets thanks to Imagination’s multi-core technology. This can generate up to 9TFLOPS of FP32 rasterized performance and over 7.8GRay/s of ray tracing performance, while offering up to 2.5 timesx greater power efficiency than today’s Level 2 or 3 RTLS ray tracing solutions.

IMG CXT is ideally suited for ultra-premium automotive human-machine interface (HMI) platforms. It enables the photorealistic representation of vehicles for surround view and dense urban areas for sat-navs, as well as mixed-reality heads-up displays (HUDs), digital speedometers and other information displays. It can also deliver premium in-car gaming and entertainment experiences while occupants wait for the vehicle to change.

Jon Peddie, founder of Jon Peddie Research, said in a statement, “Imagination Technologies pioneered hardware-accelerated ray tracing 10 years ago and has scaled it for the mobile market with its new PowerVR Photon architecture. As Imagination’s first Level 4 RTLS IP, CXT offers developers a hardware block dedicated to accelerating ray tracing that promises more power and area efficiency than other solutions. Consumers have come to appreciate the realism ray tracing provides and now will demand it in all their devices in the near future.”

The chip designs have already been licensed for multiple markets.

Travis Boatman, CEO of game studio Carbonated, said in a statement, “At Carbonated, veterans from Zynga, Electronic Arts, and Blizzard, we’re excited about Imagination Technologies leading the future of mobile GPU and ray-tracing technologies. It is important for us to optimize Mad World, our squad-based mobile PVP game, on O3DE for Imagination’s PowerVR architecture to enable the best playing experience for all
of our players.”