Developed and Published by NEXT Studios, Iris Fall is a game filled with puzzles and has an amazing storyline. This horror world is filled with dolls and the contrast of light and dark is at its heart. After the first cutscene, you'll be going through different chapters that will present unique and uncanny puzzles.

The best part about this game is that it's not hard to understand the puzzle itself. First glance at any room, and you'll know exactly what you're supposed to do, but it can take quite a lot of patience to figure out how to solve it. The first chapter deals with a few starting puzzles involving a couple of dolls.

How To Get Past The First Room 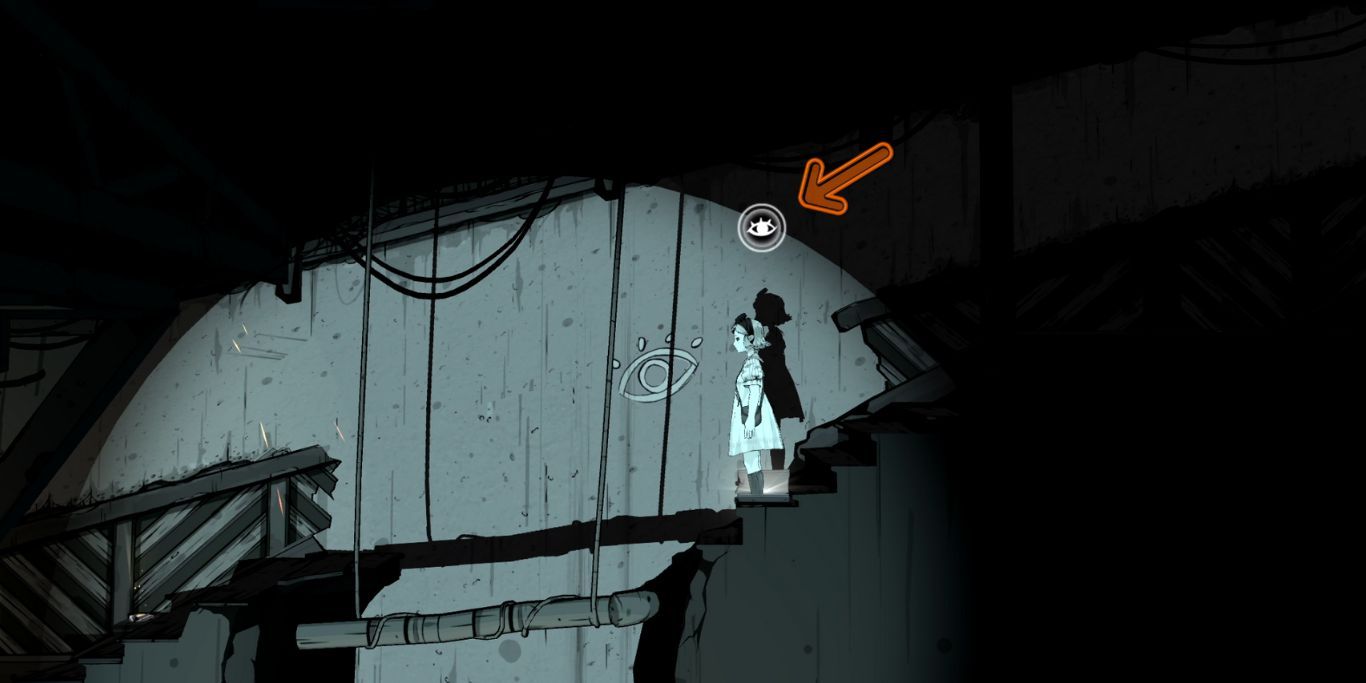 In this game, you have to pay attention to a lot of things. It's not enough to observe the solid things around you since shadows play a big part as well. After the initial cutscene filled with confusing images and stressful Iris, you'll land in a world where your cat will be your guide. Once the cutscene ends, you'll be in a set of dark stairs.

As soon as you can start controlling your character, head to the left side until you reach a book on the ground. Standing on top of this book will reveal an eye symbol above your head, and this symbol essentially makes your body disappear, and only your shadow remains. You can use this form to traverse through the shadows.

You can't progress in this area until you use the shadow form to cross the bridge since the actual bridge is quite low and dangerous to walk on. 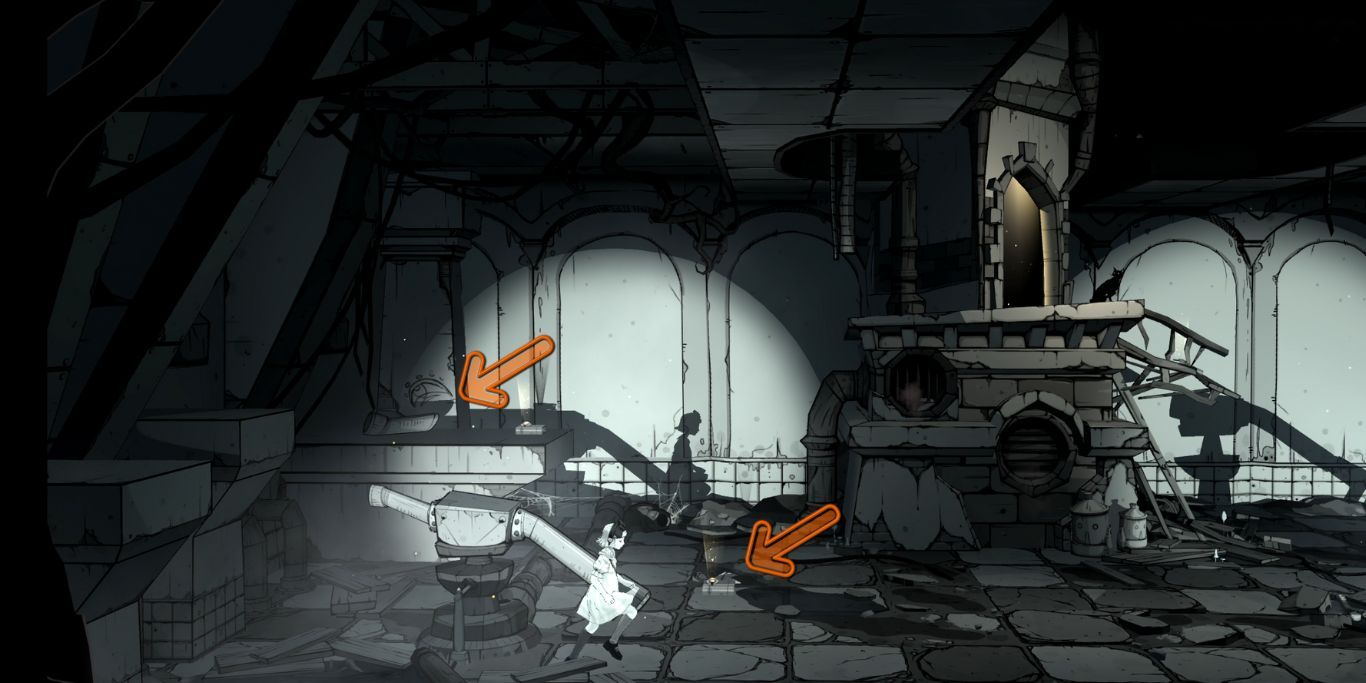 The cat that guides you through the game also makes it quite challenging for you to cross it. In the next area, the stairs will break as you quickly run down them. After that, the cat will use the shadow form to get to a height, but the platform will also break as it crosses the area. You'll have to find something to replace the platform's shadow.

Head to the right side of the room and you'll see another book on the floor. Use this book and head up the platform using the shadow, and use the second book at the top to manifest your real form again. At this point, you can pick up the pipe on the far left side and head back down using the shadow form after.

Go back to the initial structure where a platform was broken by your cat, and you'll see a bag icon as you get close just like the picture above. Open your bag placed on the bottom-right of your screen and place the pipe to connect the shadows. Finally, you can use the book on the right side to get up and enter the next room.

How To Solve The Doll Puzzle 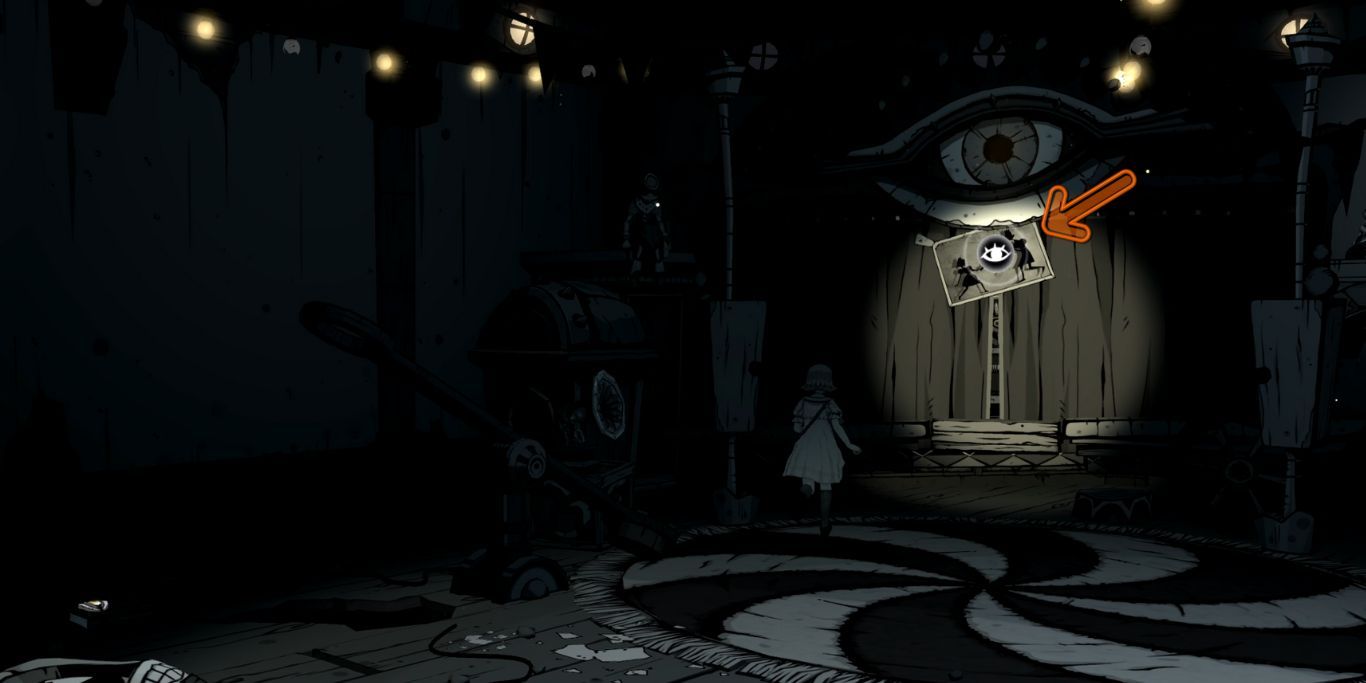 The next room will be very dark, but it will slowly light up as you go deeper inside. At this point, you only have one interaction in this room, which is the picture on the curtains. This picture will have a light shining on it, and it'll be quite hard to miss. Interact with the picture to trigger a cutscene and start the puzzle.

Two hooks will fall from the ceiling on the stage, and you'll have to find the two respective dolls to place on these hooks. You'll be able to see the dolls clearly on the top of the shelves. 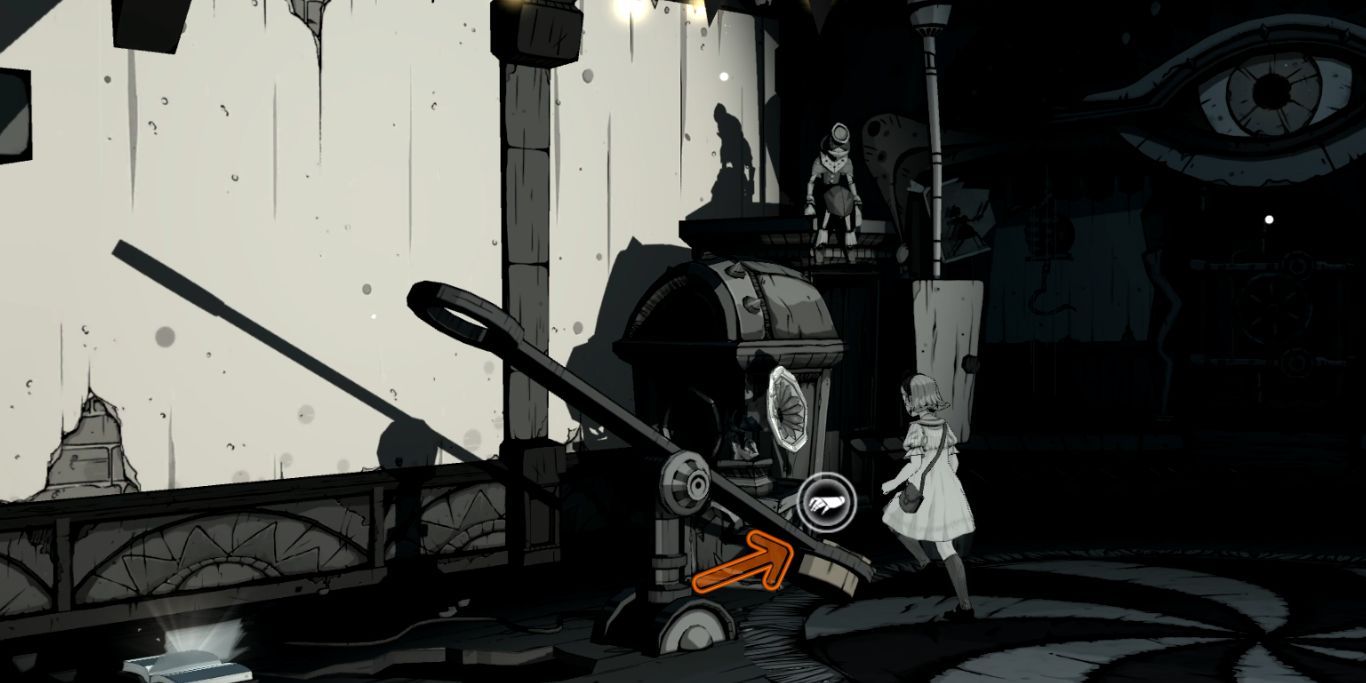 To get the first doll, head to the left side of the room and go near the part of the seesaw that's near the ground. Here, you'll get a prompt to pick up an object weighing down the machine. Pick this wheel up and take it to the other side of the seesaw. Place it on the other side to create a shadow directly to the doll. Finally, use the book to get the doll at the top. 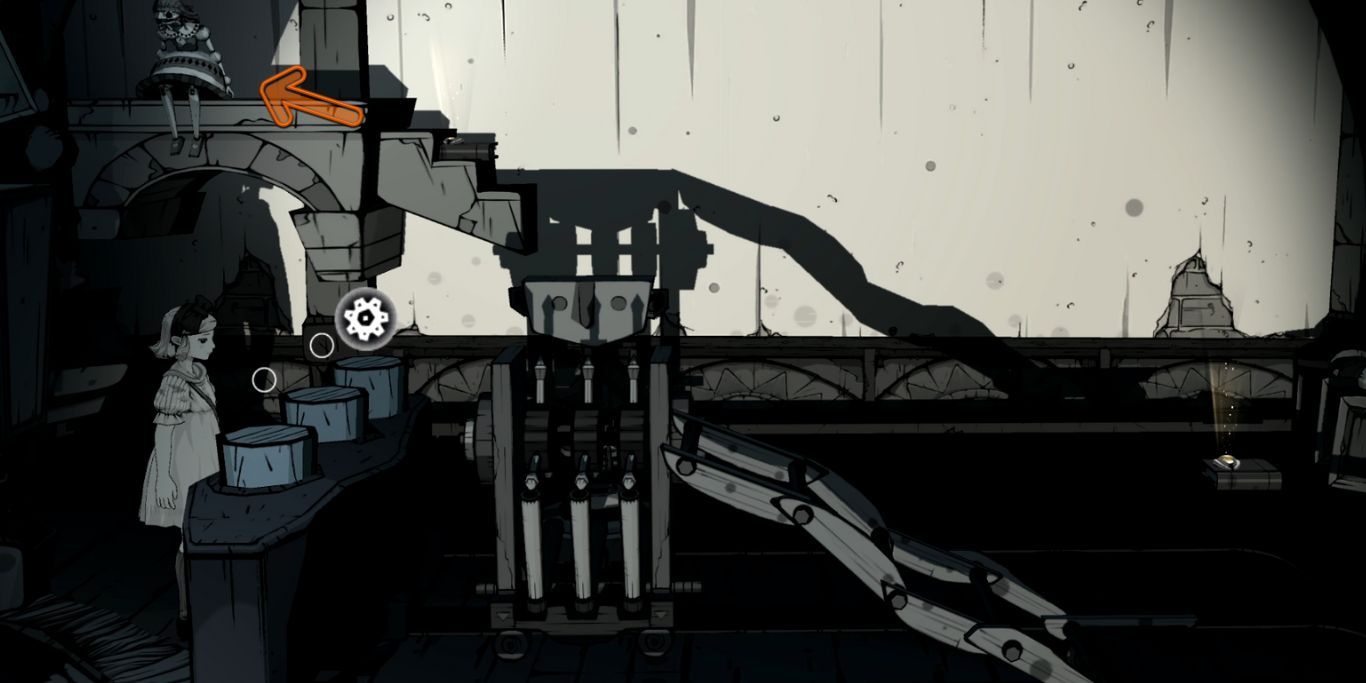 The second doll will be on the right side of this room, but the puzzle to get the doll is quite hard. You will have three buttons to control three different mechanisms, and you have to make the correct shadow using them. For the start, use the button in the middle and move the mechanic with the spike to the very left.

Next, take the mechanism controlled by the button farthest away from your screen to the left side, and take the third mechanism to the far right, as shown in the picture above. Once you've made the correct shape, the buttons will disappear and you'll be able to get the doll after a cutscene revealing a bat. 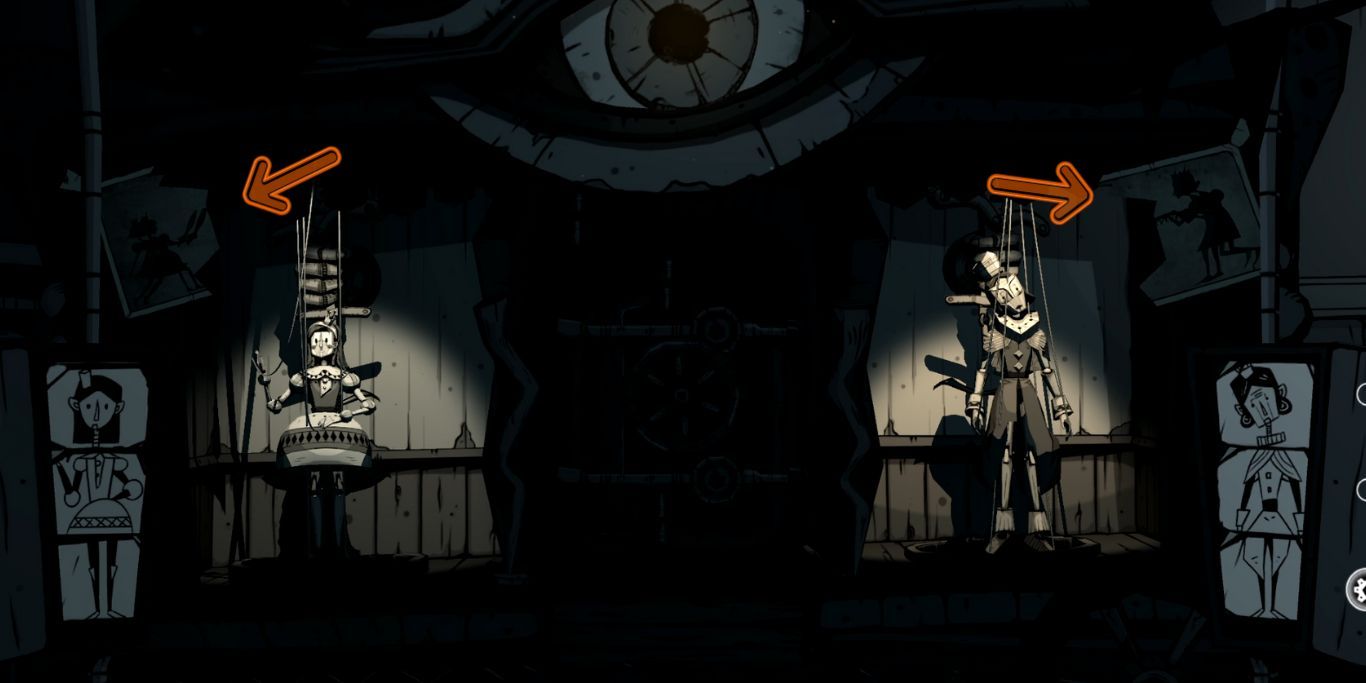 Once you have both dolls, you can place them on the stage in the order shown above. Keep in mind that the puzzle won't finish if you place them in the wrong way, and you'll have to pick them up and replace them. The final puzzle will show itself after placing the dolls correctly.

In this puzzle, there will be a picture of each doll in the shadows behind them. You have to choose the correct elements for each one to resemble this picture. Although, the elements selected won't match the pictures completely. Upon matching all six elements correctly for both dolls, another door will lead you to the start of the second chapter.