Once you enter the world of Iris Fall, the game will go easy on you as it shows you all the general mechanics. The first chapter tackles small puzzles including the one where you have to place two dolls in a certain position. After finishing this puzzle, you'll enter the second chapter of the game.

Throughout the whole game, an interesting story will be revealed to the players using silent narration. As you immerse yourself in the story, you'll have to solve a bunch of puzzles to progress, and these puzzles can be quite overwhelming if you get lost in them.

How To Solve The Circuit Puzzle 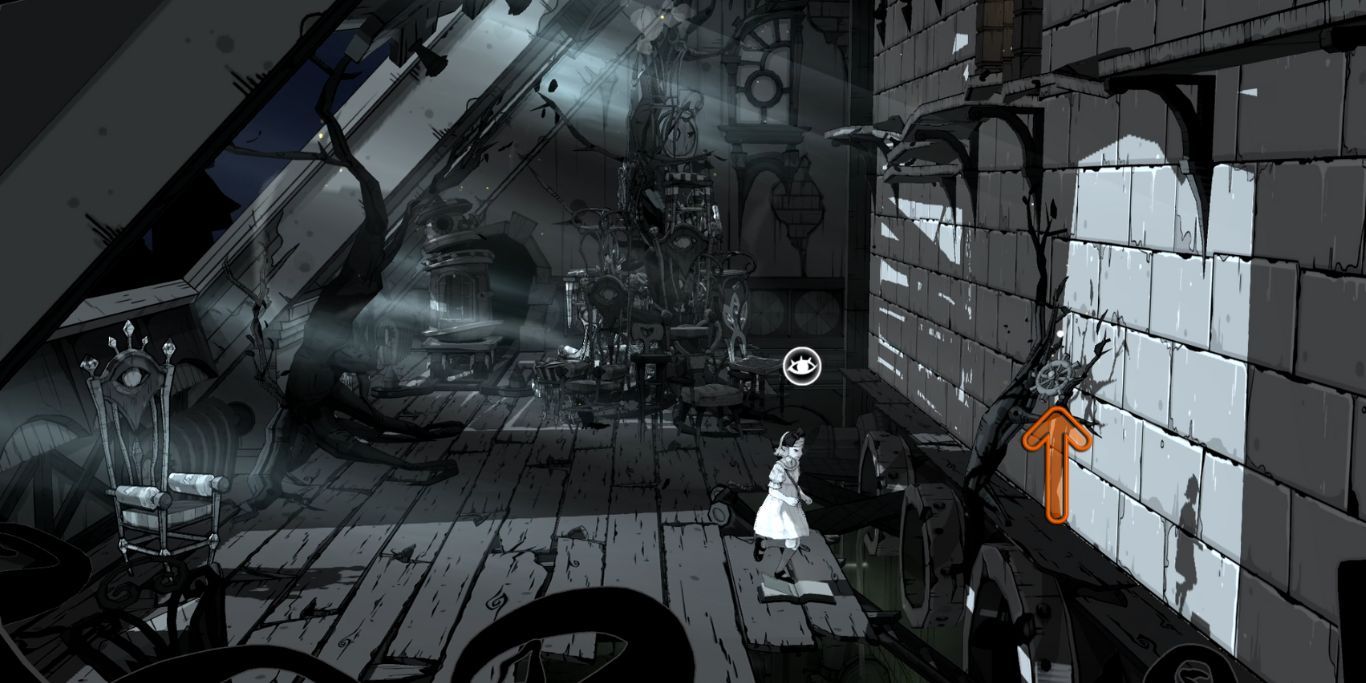 Once you get to the first room in the second chapter after solving the doll puzzle, you'll see a wheel on the right side stuck in a tree. Although, you don't have the ability to jump or fly to get this wheel. Instead, you have to use the mechanic that turns your character into a shadow and lets you walk around on other shadows.

Use the book at the edge of the room, as shown in the picture above, and you'll be able to pick the wheel up. Come back to the book's shadow and manifest your real form before heading deeper into the room. On the back left of the room, an object will let you fit the wheel inside it to reveal the giant circuit puzzle. 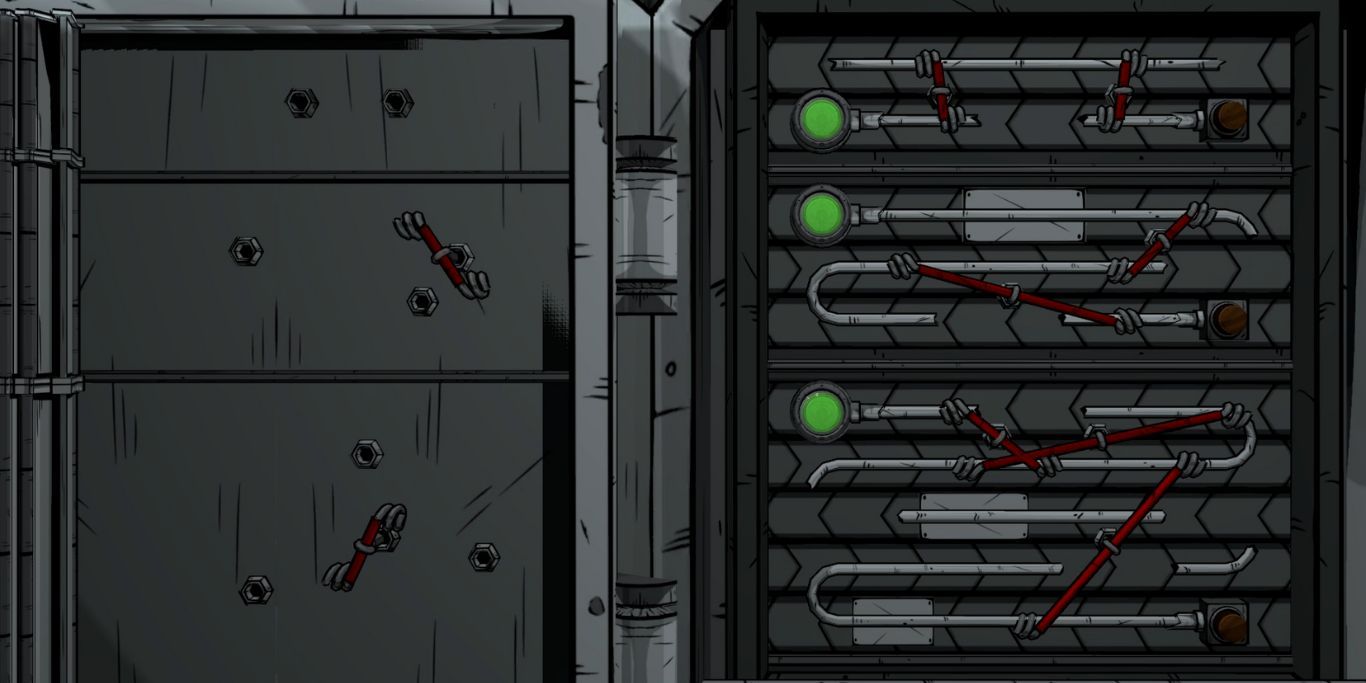 At the start, this puzzle might seem quite easy, but the game constantly reveals a harder part once you solve a circuit. Once you're in this puzzle, there will be a circuit on the right side and a few conductors on the left. You have to place these conductors correctly so that the current can flow from the start to the finish.

The picture above shows the solution for each of these puzzles. The second and the third part will have one piece that will be extra, and it's placed there to confuse players. If you're trying to do this puzzle for the first time, you'll probably try to fit all the pieces in. After finishing this puzzle, you'll enter the main part of the second chapter.

How To Solve The Giant Stairs Puzzle 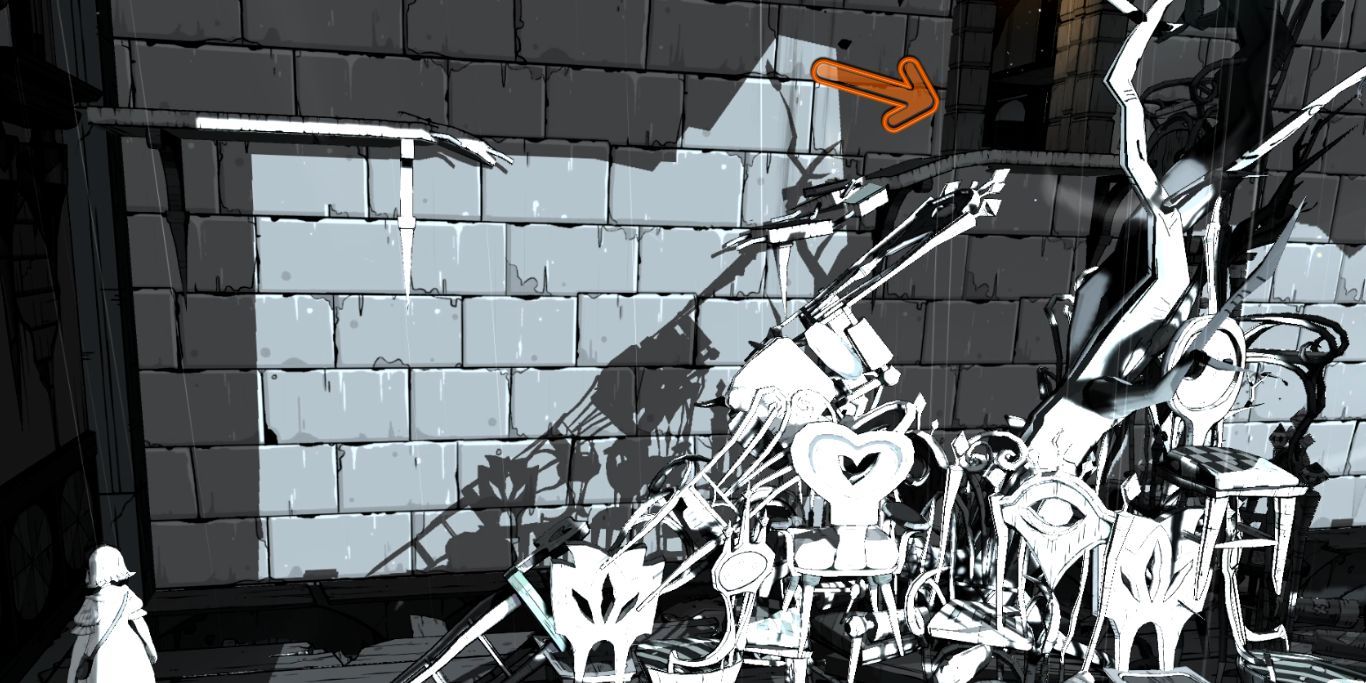 As you solve the circuit puzzle, your character will pick up a rod revealed as the cart goes away. Moreover, you'll be able to head to the next room using the book on the far left. As soon as you get to the next room, go up the stairs that take you deeper into the area and follow the path. 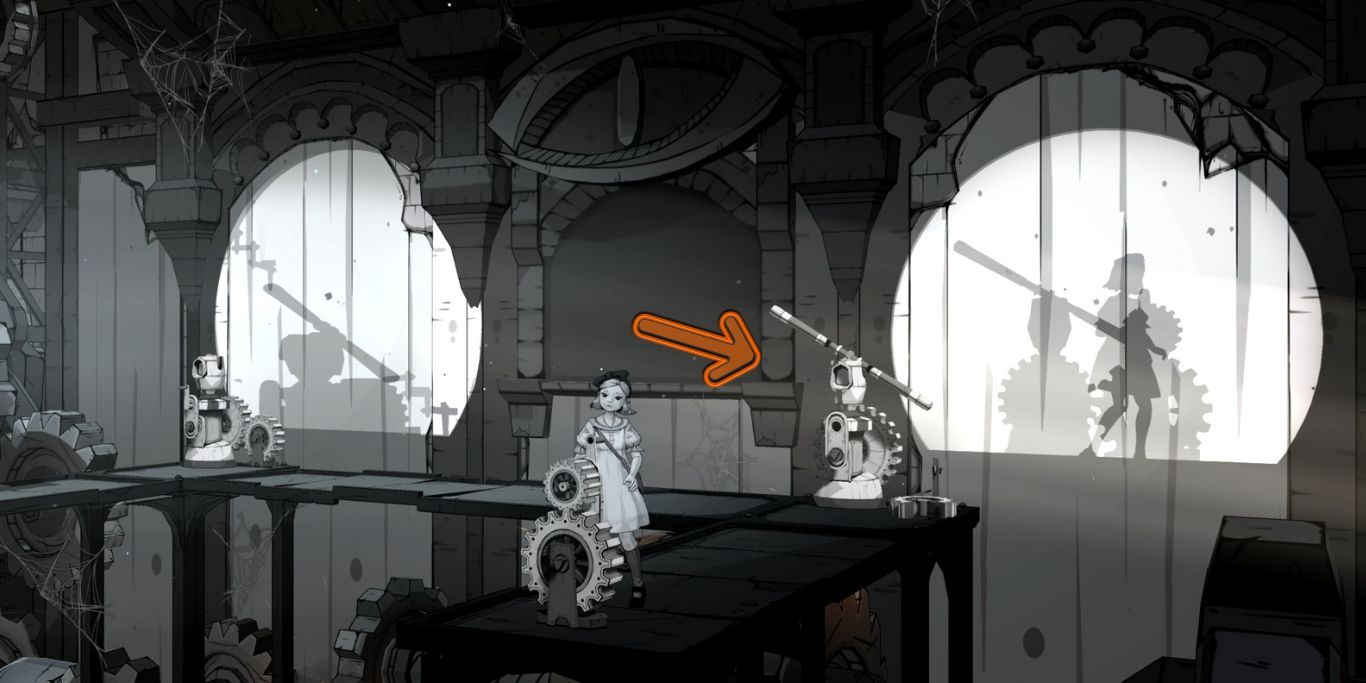 As you get a little farther, some lights will highlight two mechanisms on the platform. You have to use these mechanisms if you want to continue the story, but there is a catch. The first mechanism on the left side of the room is bait, and it's there just to waste a player's time. To solve the puzzle, head to the right mechanism and place the rod there.

Once it's placed the machine might be facing the wrong way, and you'll have to use the mechanism where the character is standing in the picture above to change its position. Once the correct side is facing upward, you can head back to the book on a set of broken stairs on the left side.

Use the book and traverse upstairs through the shadows to get to the next part. You'll have to keep following the path and get to the top until you reach a mechanism that has two interactions on it. On this machine, you can rotate a set of stairs in different directions, and you have to find the correct position to progress. 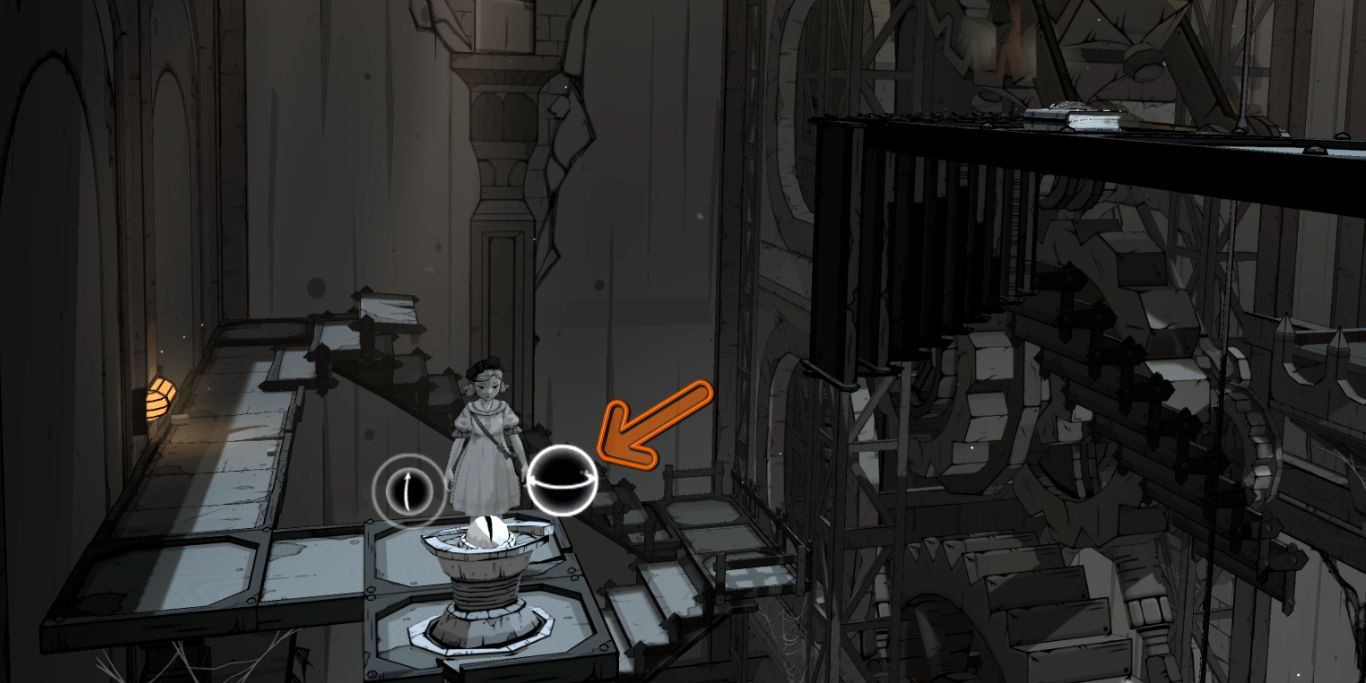 These rotating stair puzzles are very tricky, and you can easily get lost in them for a long time if you don't make the correct moves. The mechanism will have two buttons: One of them will move the stairs vertically (left) and the other one will move them horizontally (right). To solve the first puzzle, you simply have to press the button on the right three times. 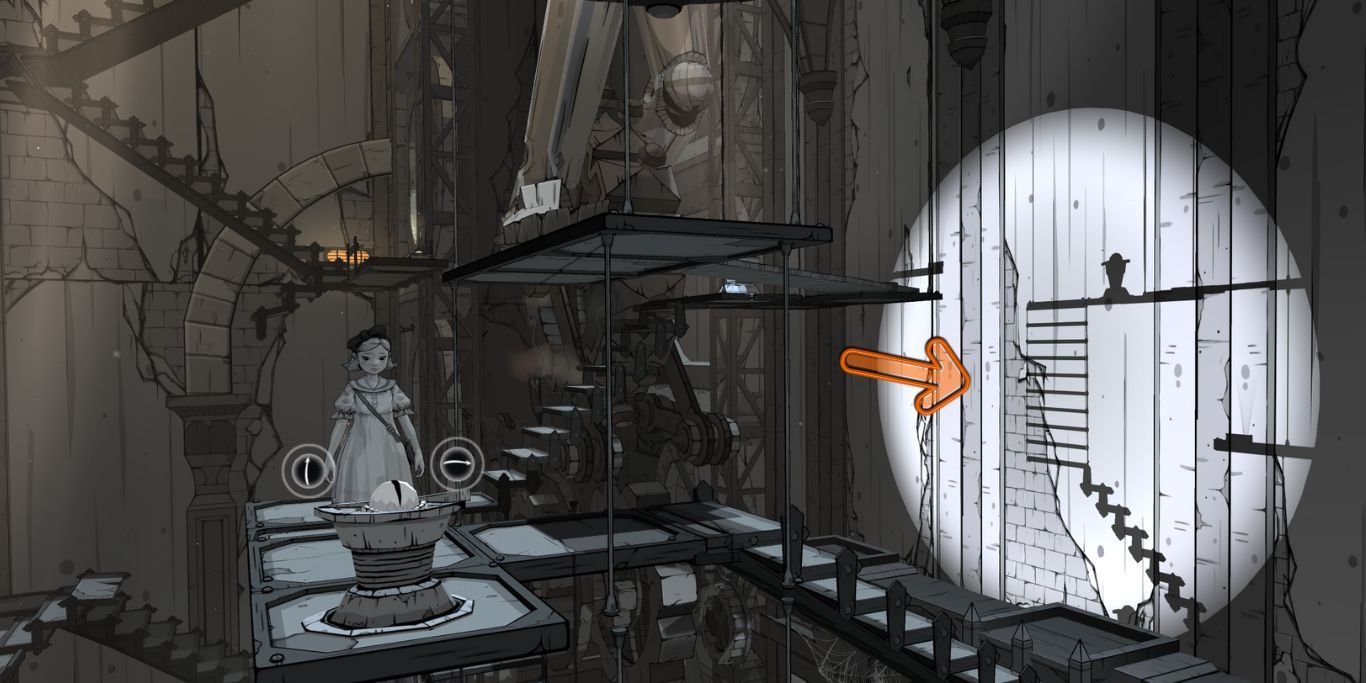 The second time, this set of stairs will take you to the bottom level, and you'll have to climb a bunch of stairs to get to the third mechanism. This one will show you the shadow of the stairs, and you have to place it in a way that creates a path from the bottom right platform to the top left one.

To solve the final puzzle, follow the pattern carefully: Left – Right – Left – Left – Left – Right. After placing the stairs correctly, you'll see the auto-save icon appear on the top-right side of your screen. Use the book right behind you to go into the shadows and get to the top left platform.

Use the book again to come out of the shadows and follow the path up the stairs to trigger the final cutscene. In this cutscene, you'll be introduced to a hooded figure before you get into the third chapter.