Kirby And The Forgotten Land: The 10 Best Stages

Kirby and the Forgotten Land has been a pleasant surprise for many. The series' pivot into 3D felt a bit overdue, but HAL Laboratories has succeeded in breathing new life into Kirby's adventures.

This time Kirby must travel between six different areas, each one inspired by a different theme like water or fire. Every stage feels unique and creative and will require you to use one of Kirby's abilities or new Mouthful Mode forms to clear them. Many of them are fun to play through once, but others will have you coming back to them for a second time just for fun. 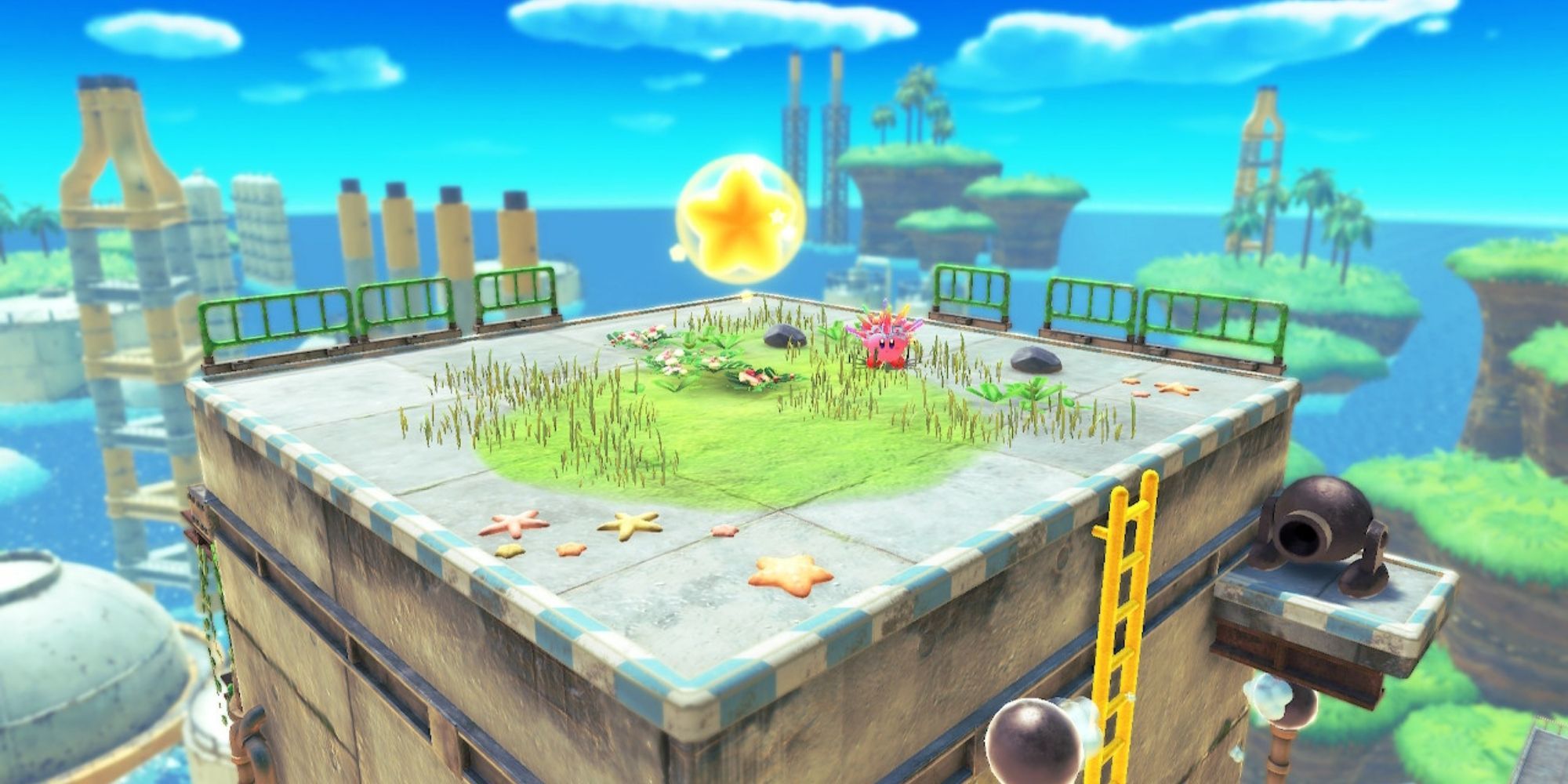 Everbay Coast is the water-themed area in Forgotten Land, and most of the levels will require Kirby to swim through currents or avoid whirlpools. Scale the Cement Summit is a bit different, as he will need to ascend the outside of an industrial building to avoid getting wet.

What goes up must also come down, and those same rules apply to Kirby. Once you reach the top of the building, you will be able to use Arch Mouth for the first time to turn the pink hero into a glider. You can now fly to another piece of land across the ocean while taking out enemies and avoiding obstacles. It's so much fun the first time, you might want to turn around right away just to do it again. 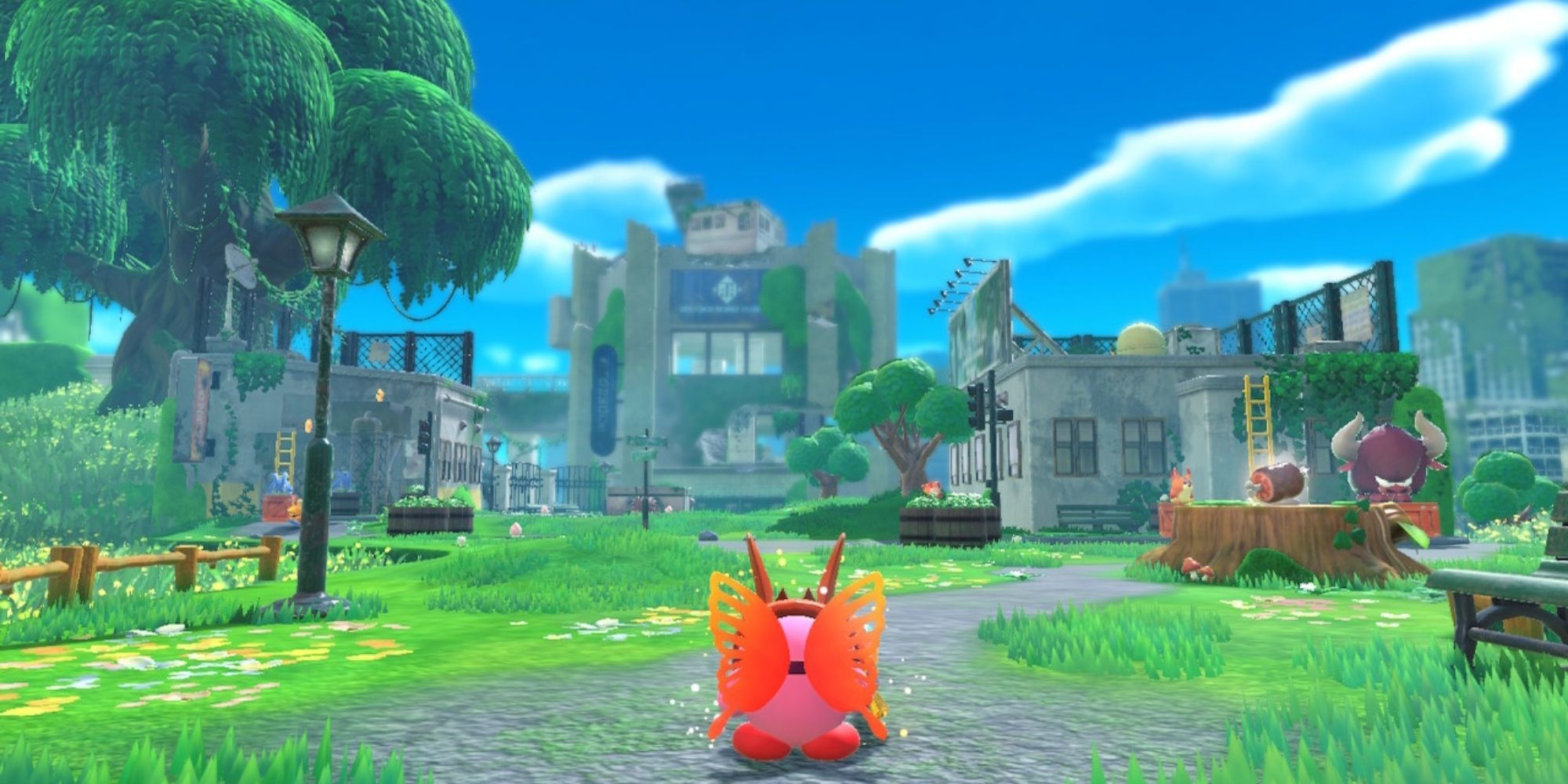 Downtown Grassland is the first level Kirby will encounter once entering the Forbidden Lands, and it introduces him to the vibrant world wonderfully. You will get to discover your first few Mouthful Modes and face your first mini-boss here.

From the gorgeous music to the enemies and puzzles, Downtown Grassland does an amazing job of setting the stage for the rest of your adventure. The first level of any game should leave a strong impression, and exploring this mysterious and overgrown city should hopefully entice you to solve all the secrets of this strange planet. 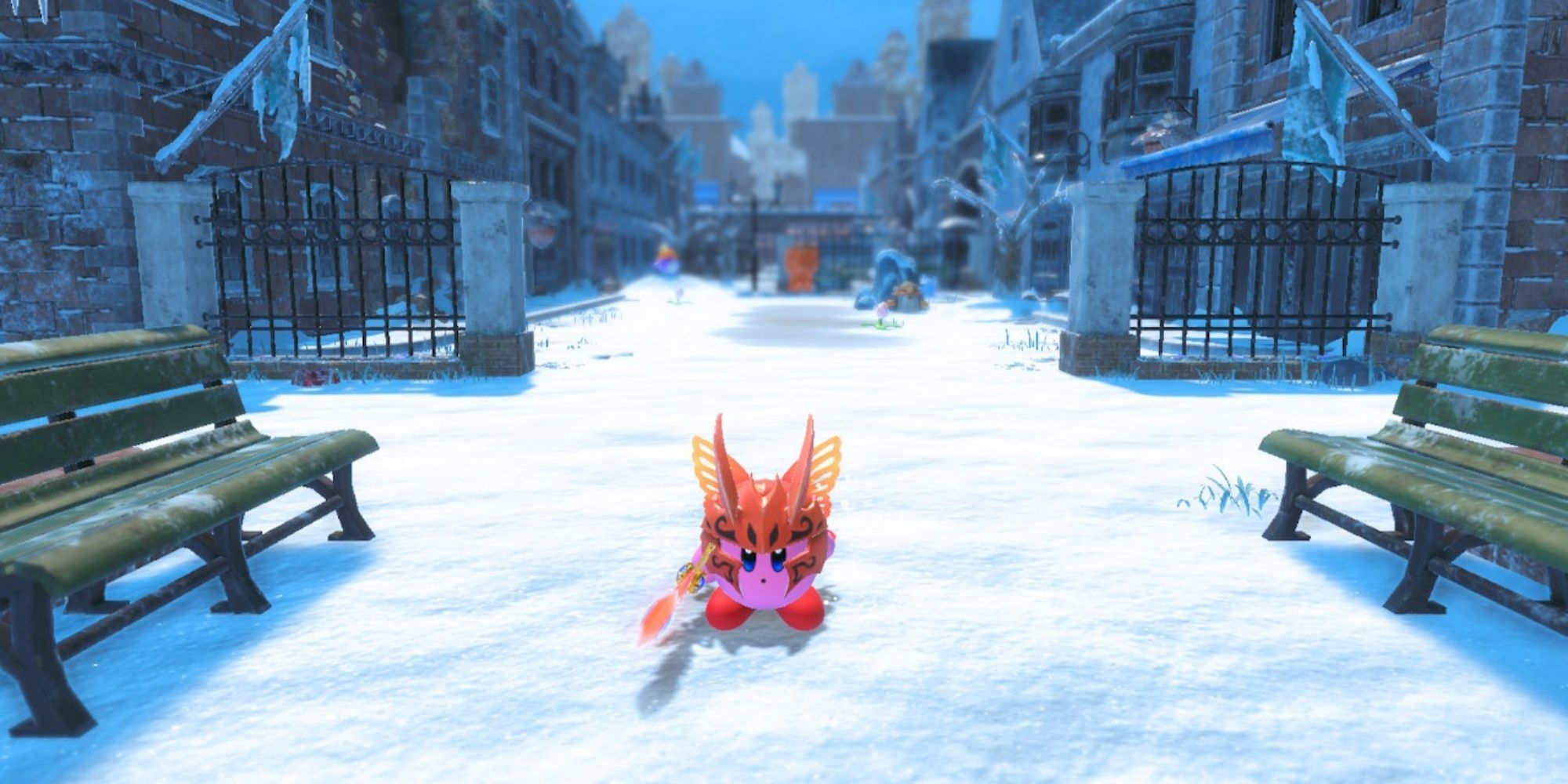 Seeing cities and suburban areas in a Kirby game is jarring at first. It would be even weirder if humans were still walking around like in New Donk City, but the only souls to be found here are the often antagonistic inhabitants of this new land.

When you arrive here, it's immediately evocative of Victorian-era London. Old brick buildings and steel gates surround this snow-covered street as a clock tower stands above it. It's pretty cool to play as Kirby in this abandoned town, and imagine what it may have looked like before the mysterious apocalypse occurred. 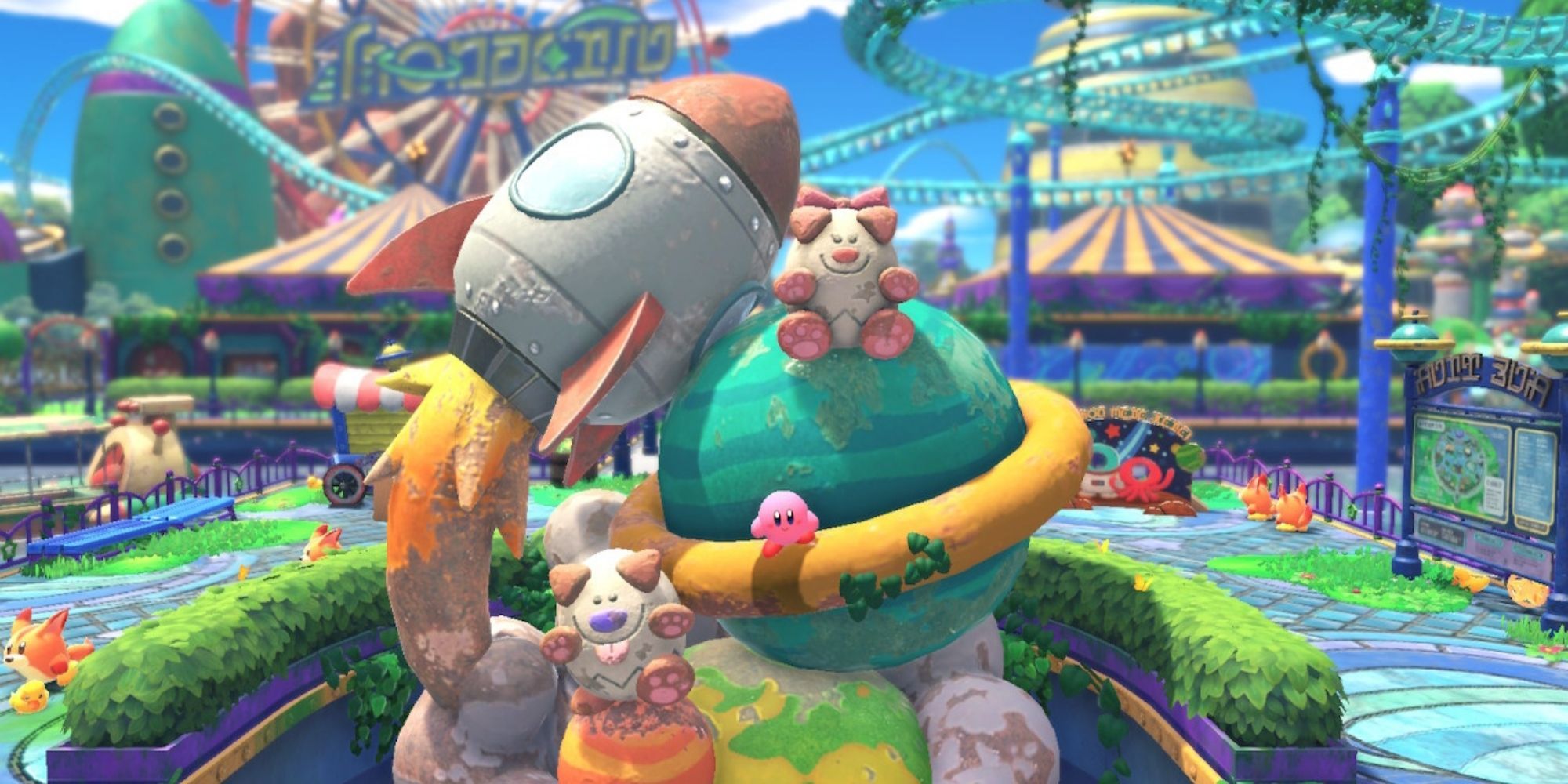 As mentioned earlier, each area in Kirby and the Forgotten Land is themed around an element like water or snow. Wondaria Remains is the exception to this rule, as each level is inspired by an amusement park. The aesthetic is oddly reminiscent of Nier: Automata in the best ways possible.

Welcome to Wondaria will be the first level you encounter, and the best part is there are no long queues for admission! Kirby can ride his Warp Star right past the ticket gate and begin exploring immediately. You will need to dodge rogue parade floats and use Water-Balloon Mouth to clear this awesome stage. 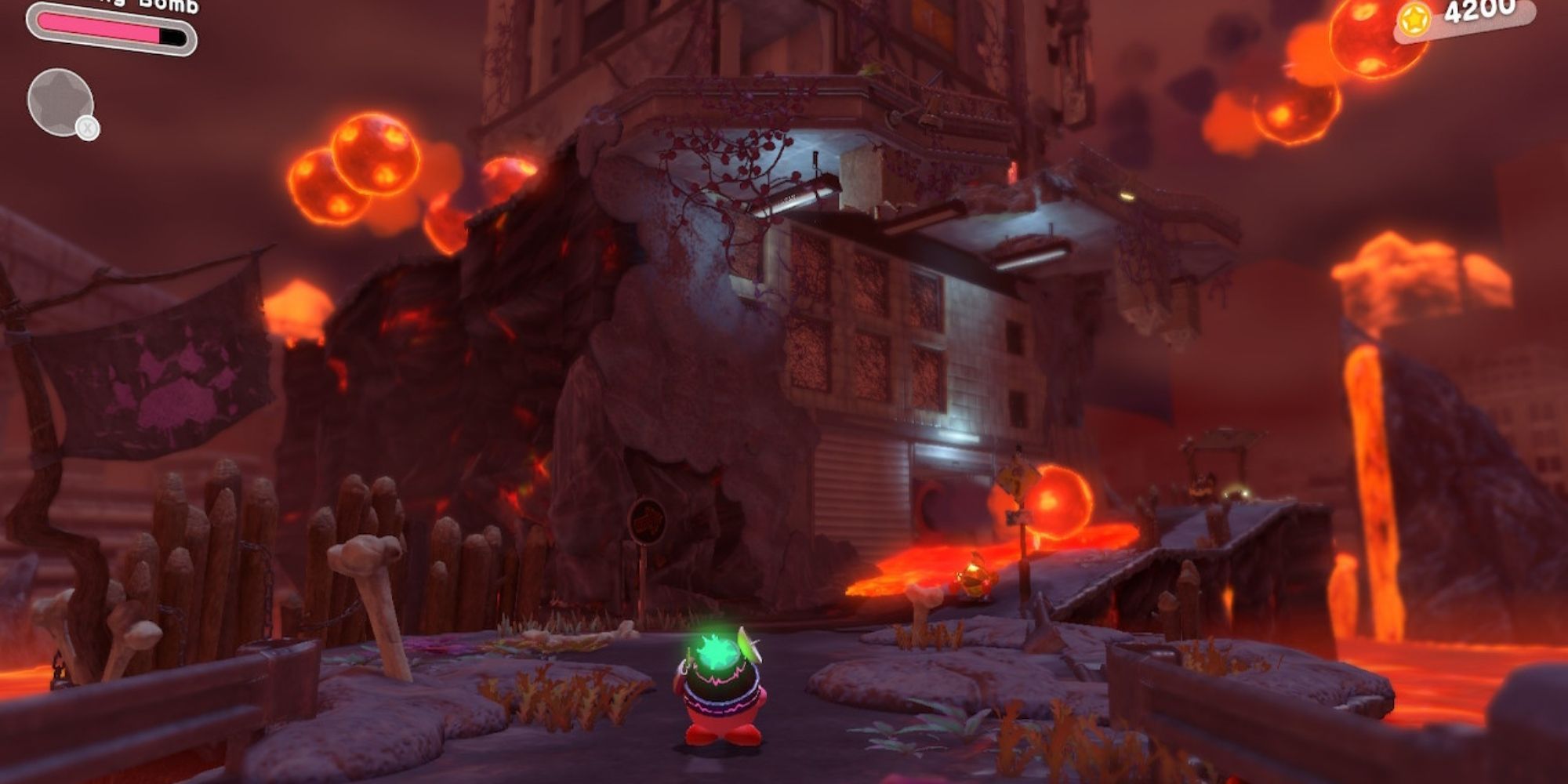 Conquer the Inferno Road sounds like a great subtitle for the next Mad Max movie, but instead, it's the name of another incredible stage in Kirby and the Forgotten Land. Redgar Forbidden Lands is right outside an active volcano, so you will need to look out for lava to avoid getting burnt.

Like Scale the Cement Summit, this level begins with Kirby climbing an old tower, only this time the path is a lot more dangerous. After finally reaching the top, you will need to maneuver across rooftops and narrow paths while a fire below rages throughout the city. It finally culminates with Kirby using his Ring Mouth ability to navigate a boat across the lava to the finish line. It's like the sequel to 1997s Volcano that you didn't know you needed. 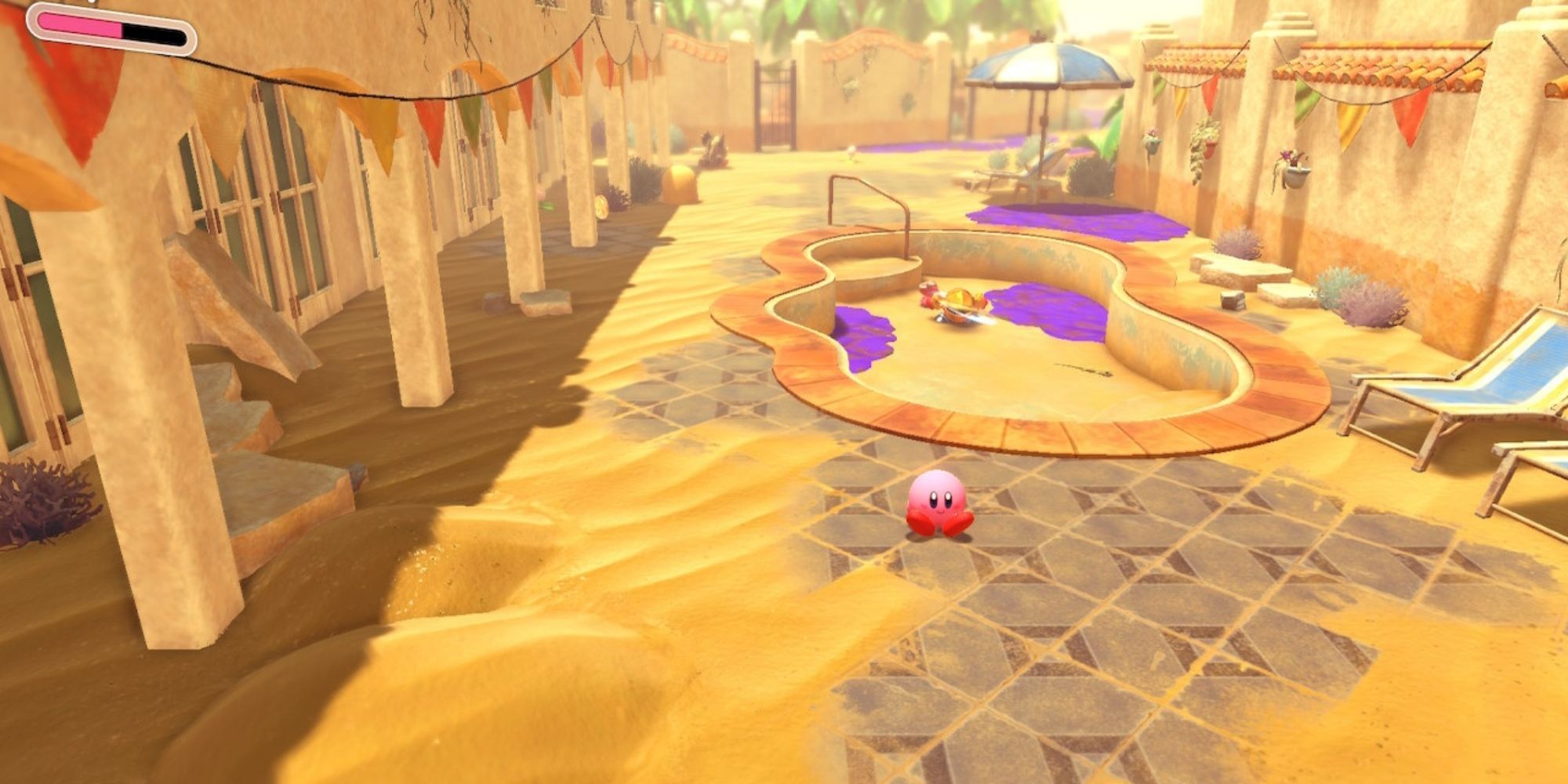 Originull Wasteland is the sandy region of the Forgotten Land, and Kirby will once again discover an empty town with a mysterious aura around it. In Searching the Oasis, you will need to explore a town similar to Dry Dry Outpost from the original Paper Mario.

It's oddly haunting to see empty swimming pools full of sand and lizards, but it's hard not to be compelled to shift through every corner of the stage in search of clues or secrets. You will also need to be wary of the poisonous enemies that spew sludge on your path, but using Water-Balloon Mouth will quickly clean up the mess and remove other obstacles from your way. 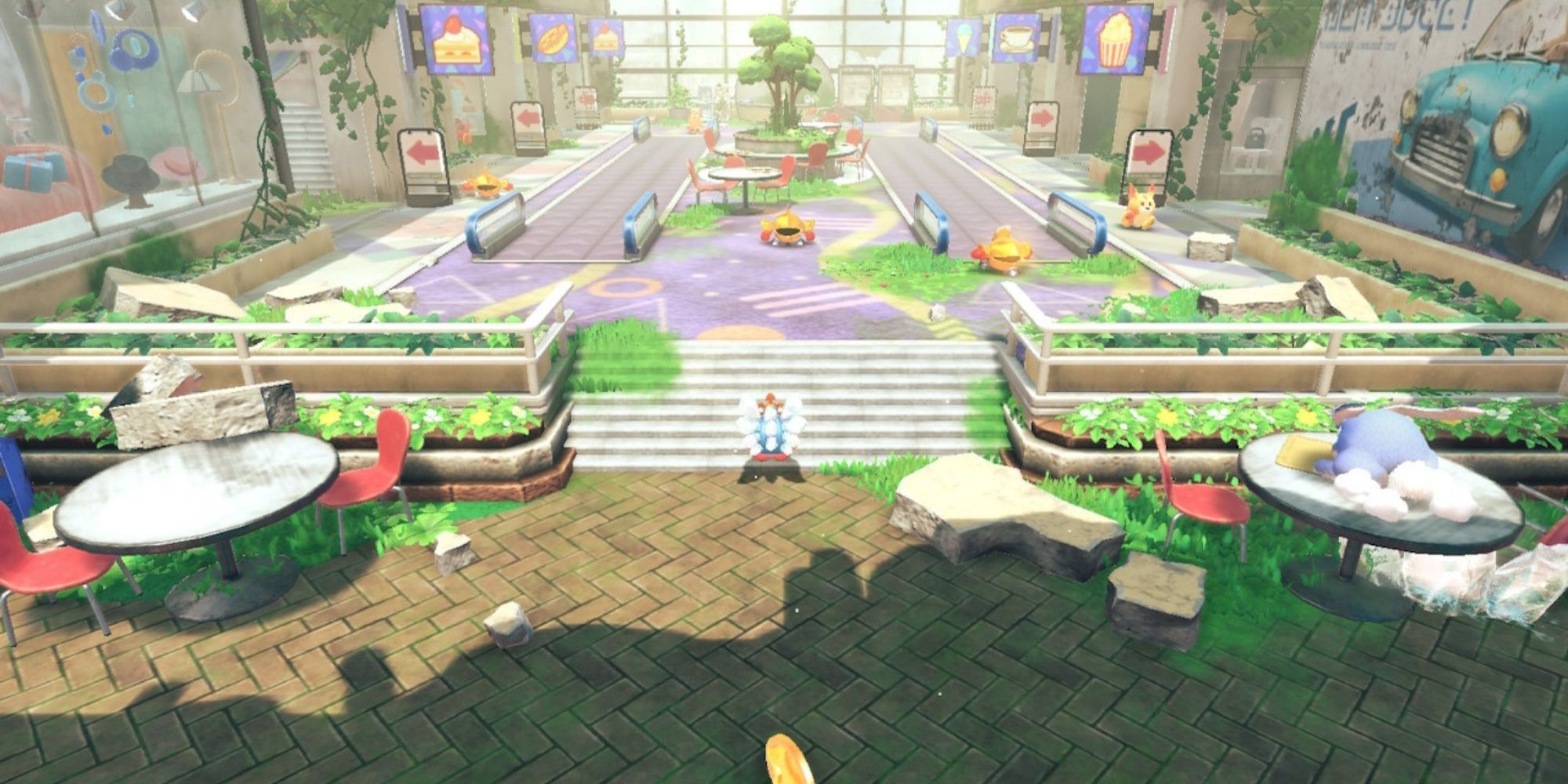 Going to the mall is usually pretty fun, and Alivel Mall in the Forgotten Land is guaranteed to leave its only customer of the post-apocalypse with a great impression. Malls have always been a great setting for action and adventure in video games and that legacy continues in this stage.

The entire level is almost a puzzle within itself. Throughout Kirby's shopping spree, he will need to choose between multiple paths ahead of him to get the most rewards from his journey. By searching for hidden clues in previous areas, you can determine which path is the correct one, but if you guess incorrectly you will be ambushed by enemies in the following room. There is also a part where Kirby rips an entire wall down with his mouth, so it earns bonus marks for that. 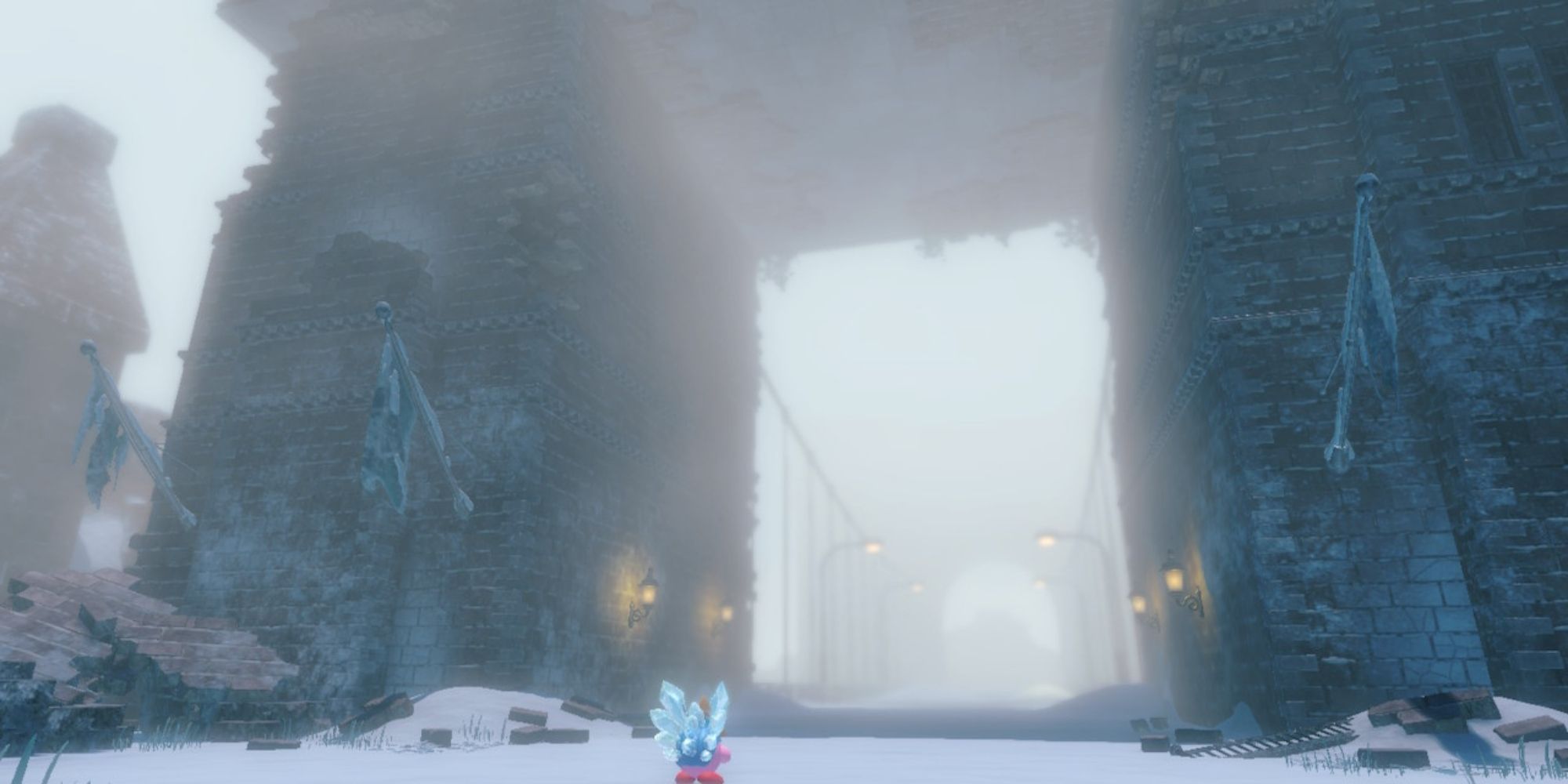 It's a strange feeling when a Kirby level reminds you of the opening sequence from Metal Gear Solid 2. In this stage, you will need to cross a long bridge surrounded by fog, defeating relentless waves of enemies in the process.

By the time you reach The Battle of Blizzard Bridge, you will start to notice a significant spike in difficulty. Everything you face moving forward will be more challenging than anything before this point. This stage acts as a good skill check before taking on the next few bosses. You will be able to play with a variety of abilities while taking down more foes and mini-bosses than ever before. 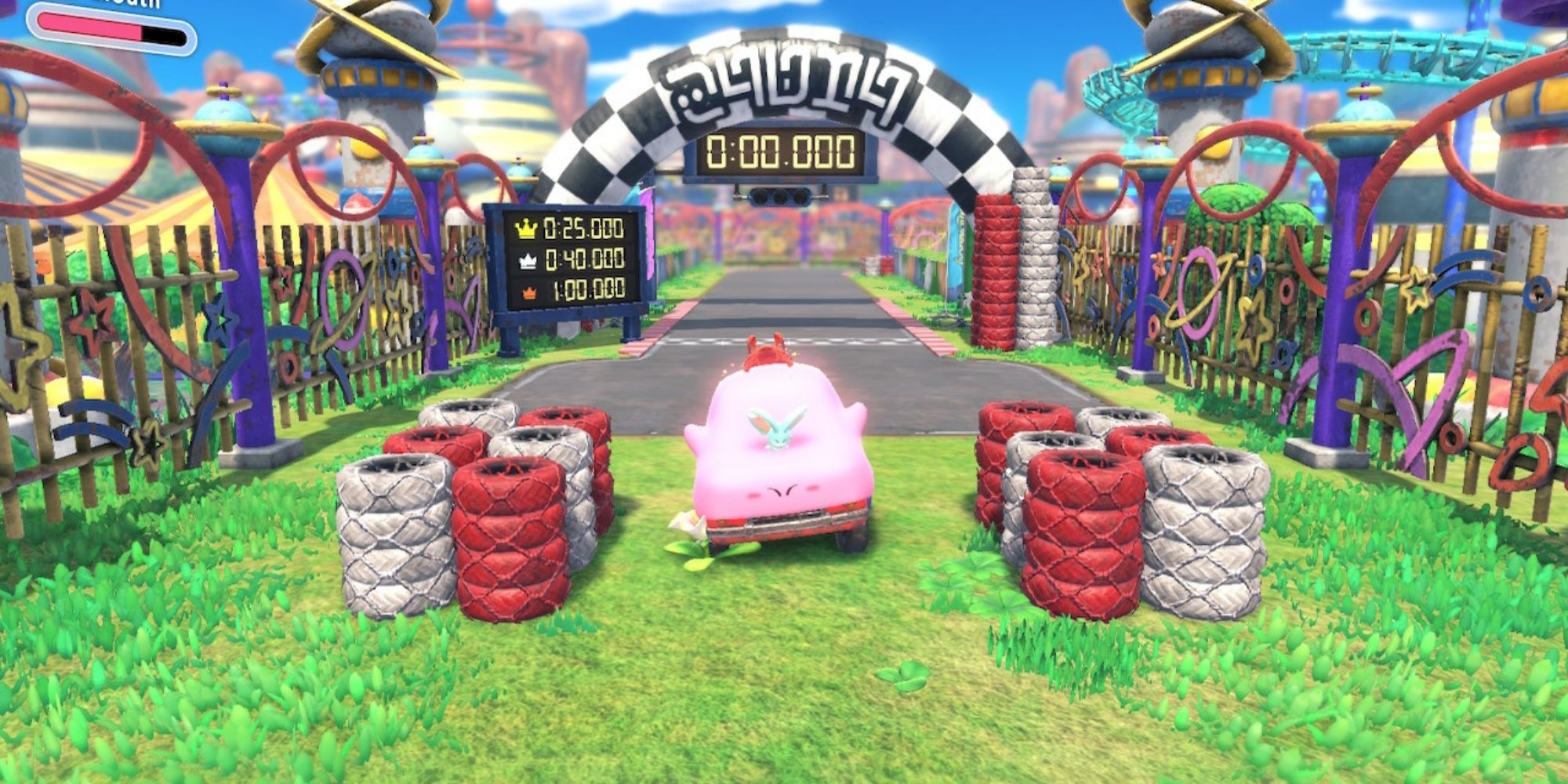 Kirby's Car Mouth was the first Mouthful Mode form audiences learned about in a reveal trailer back in February. By stretching his mouth over the top of any vehicle, he can zoom around on four wheels while his little feet dangle behind him. It's amazing and allows him to run over enemies and break through walls.

Circuit Speedway is the stage right after Welcome to Wondaria and will test your driving skills in a series of races. You will need to collide with enemies, avoid traps, and discover shortcuts to earn the first-place prize in each one. You must approach each race strategically and be prepared for anything to earn your license here.

1 Invasion At The House Of Horrors (Wondaria Remains) 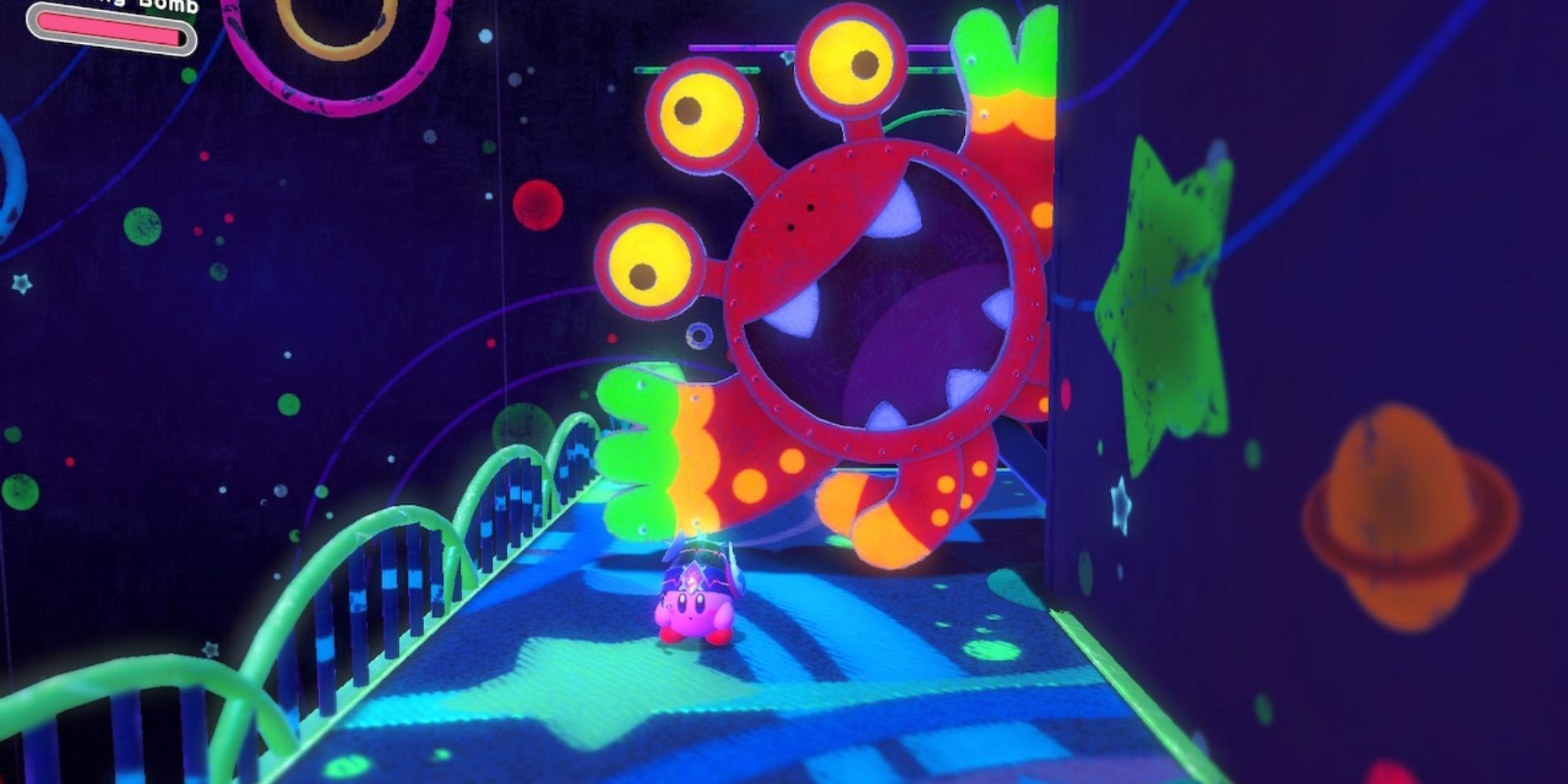 Each area in the Forgotten Land contains at least one level that has that Nintendo magic embroidered into it. Stages that make you feel like a kid again as you discover a hidden Waddle Dee or Easter egg. Like the Amusement Parks that inspired it, Wondaria Remains is home to a majority of those levels.

In Invasion at the House of Horrors, Kirby enters an ominous circus tent that leads to an incredibly tense journey into madness. You will need to navigate your way past ghosts and endure jump scares from cardboard monsters to survive this journey.

The best part about the stage though is the use of Kirby's Light-Bulb Mouth form. You will find yourself in incredibly dark areas during your time here and will need to use this ability to find your path forward and dodge incoming attacks. All of this accompanied by a track that's both haunting and playful is the perfect formula for a Kirby level.