Lost Ark: Where To Find Every Mokoko Seed In Croconys Seashore

Croconys Shore is probably the largest area in the first four continents of Lost Ark. But you’re rewarded with a bumper crop of 18 mokoko seeds as you work your way through it. While its Stormcry Grotto dungeon brings the area’s total to 30 with another 12 seeds.

However, they’re not all easy to find. Four of the mokokos are in two secret areas. The first at the top of a hidden cliff climb and the others on the wrong side of a barrier you’ll need to spend quite a bit of time smashing down. But on the plus side, you don’t need any songs to get by them. So, if you want all the locations, just follow our seed-by-seed guide below. 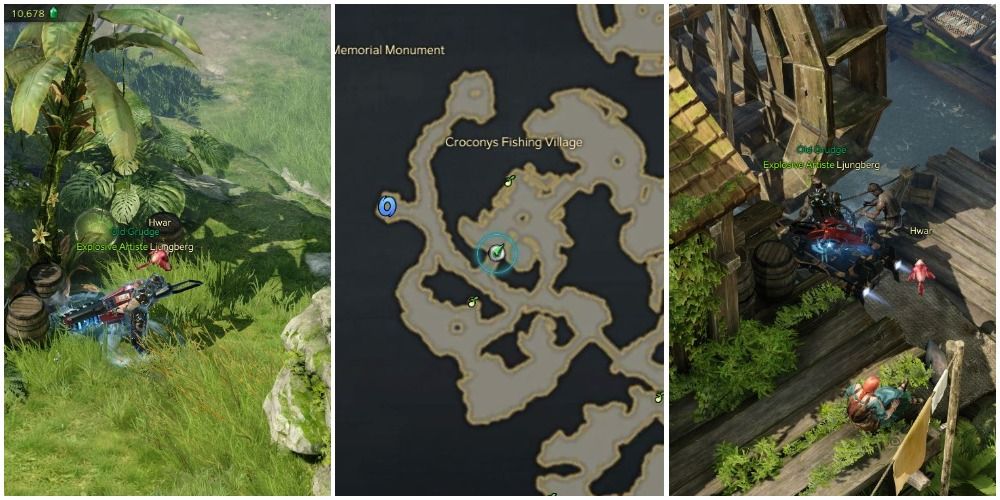 When you enter Croconys Shore from the Wavestrand Port portal, follow the southeast path and head right (southwest) at the fork. As you move into the area filled with plunderers and their dogs, stick to the northern edge. You’ll see three barrels next to the point where you can look down from the cliff to more barrels and a path below. The first mokoko is to the left of the third barrel in the grass.

For the second seed, head into the village and up into the northern corner. You’ll see a large waterwheel next to a large building. The mokoko is at the base of the wheel by a fisherman working on a net. 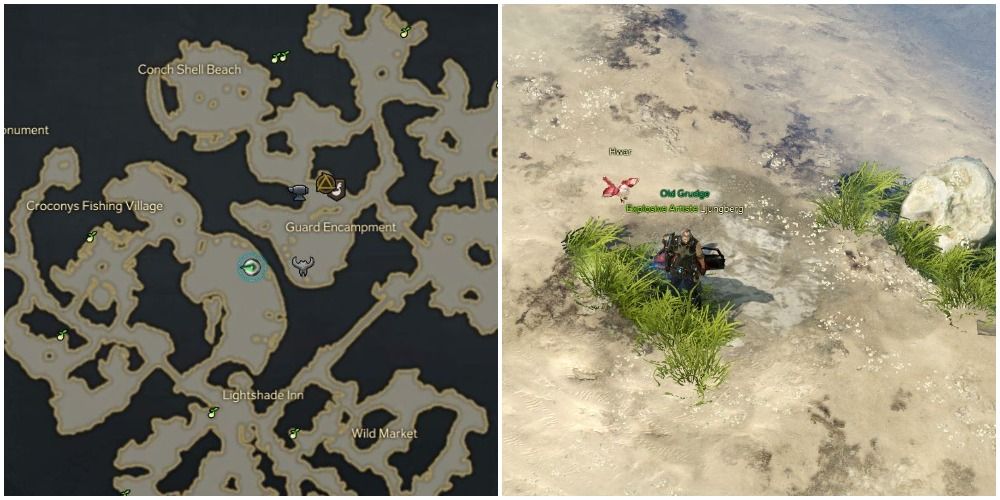 Head northeast out of town and onto the beach. Head east across to the water into an area infested with large, aggressive crabs. At the second group of crabs, in a patch of grass on the beach near the water, you should spot your third mokoko seed. If you get to some wood in the water, next to some pink and orange foliage, you’ve gone just past it. 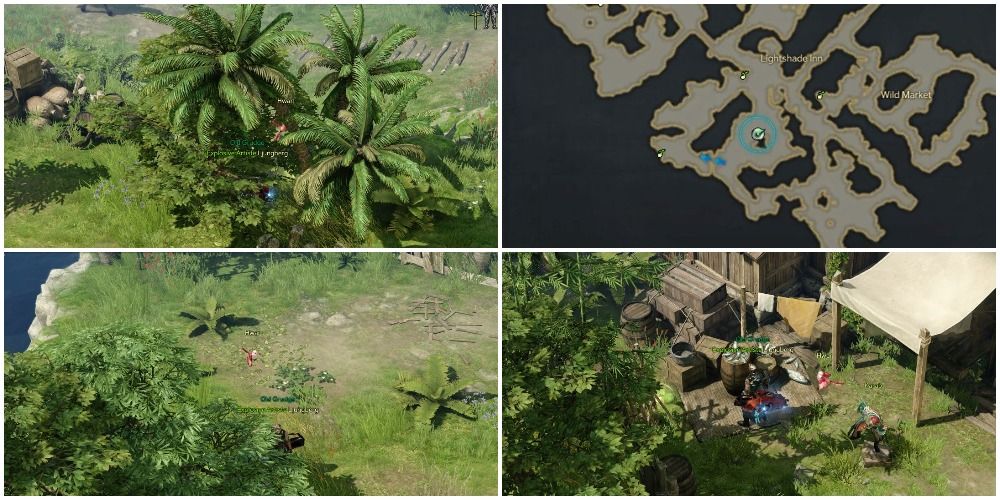 Leave the beach by the southerly exit and turn east up a small slope. Turn right at the top, hugging the lichen-covered rocks going west, and look in the middle of the three palm trees for your fourth mokoko.

From here, head down the southwest path into the corner, to the west of the rope vine (marked by blue arrows on the map). On the southern edge of the area, your next mokoko is hidden by the leaves of the trees southwest of where a group of four moths spawns.

Now head to the Lightshade Inn itself. Karab will be standing outside and to his right is a large barrel covered in fish. To the right of that, in the grass next to the mat, is the sixth mokoko seed of Croconys Shore. 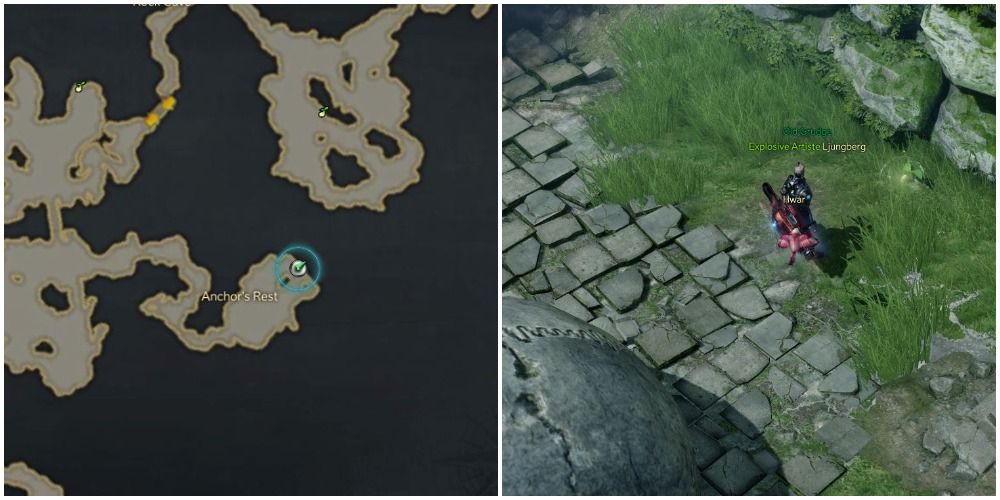 From the Guard Encampment Triport, head east along the long path to Anchor’s Rest. Head to the very back of the ceremonial area there. Between the huge stone skull and the wall behind you’ll see your seventh mokoko, lying in plain sight in the grass. 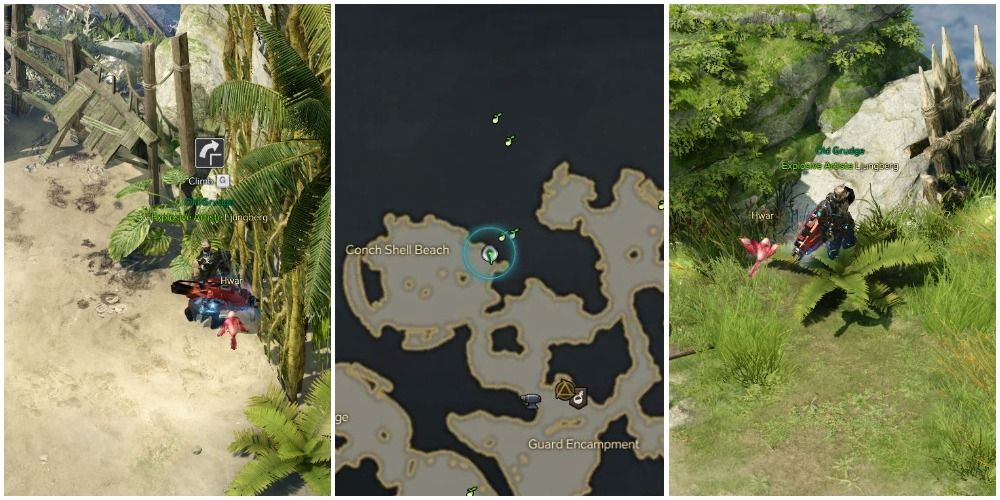 Starting once again at the Guard Encampment Triport, this time head north and west into the western side of Conch Shell Beach, through the wooden posts decorated with skulls that have orange-glowing eyes. Once in there, skirt the eastern edge of the area going north. Before the edge starts to turn west (where there are piles of paintings), you’ll spot a palm tree obscuring some vines.

Stand by them and a ‘climb’ icon will appear. And at the top of the climb, to the right of the wooden tower in the grass, you’ll find two more seeds. One is near the base of the tower. The other is in front of the small piece of wooden fence with sharpened spikes. 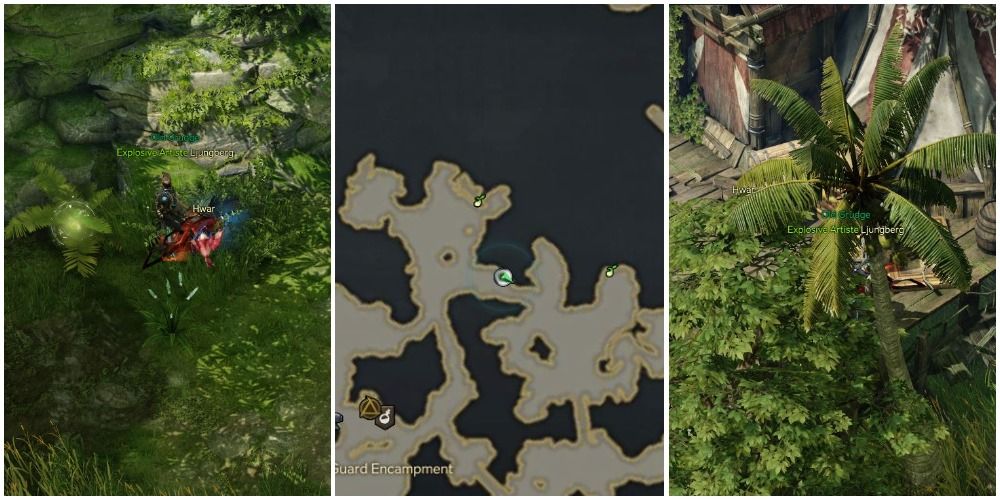 Your last trip from the Guard Encampment Triport sends you east and then southeast at the first fork. It’s the area where the rival pirate gangs are battling each other. Skirt the north edge of the large area you come into then take the north path into the next one, heading to the northern tip. You want the small area to the left of the winding path that heads towards Rock Cave. The seed is at the back by the cliff wall, hidden in some bracken.

From here, keep heading along the northern edge of the area as you work your way west and into the next area, along the western path. You’ll enter the pirate’s hideout. At the back is a large wooden building on a raised wooden platform. And on the right side of the platform, a bunch of barrels and paintings. Head onto the platform to the paintings. The eleventh mokoko is there, obscured behind the leaves of some trees.

Mokoko Seeds Twelve And Thirteen – Secret Area Beyond The Barrier 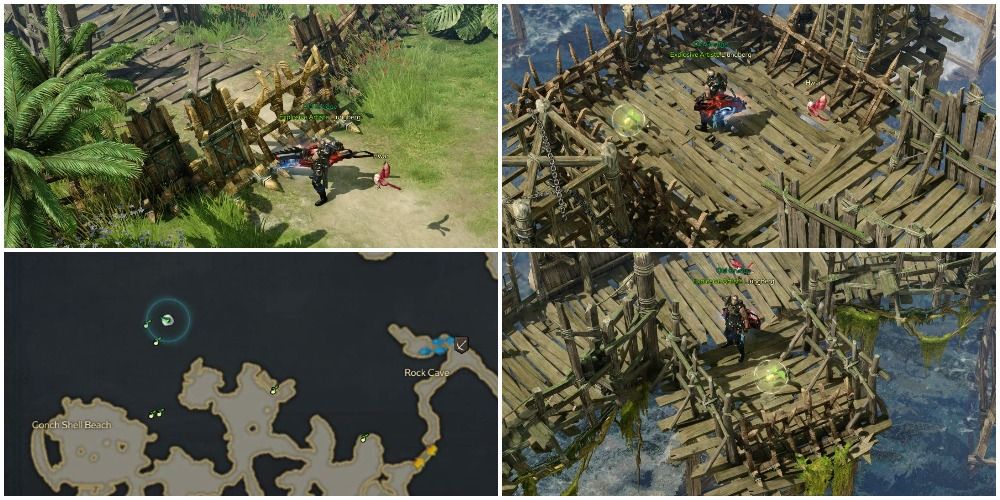 Keep going right up into the northwest corner up a short slope, where you’ll come to a large barrier blocking your path to a wooden jetty. It’s guarded by a group of pirates led by a weak named boss, Shakza.

Warning: You need to do a lot of damage to this barrier to destroy it and mobs will repeatedly respawn here. And once the barrier goes down, it comes back up pretty quickly, so make sure to rush right through. Once through, head onto the wooden jetty. It’s circular, with a section also leading into the middle. The first seed is on the middle platform and the second on the northwest platform, both in plain sight. 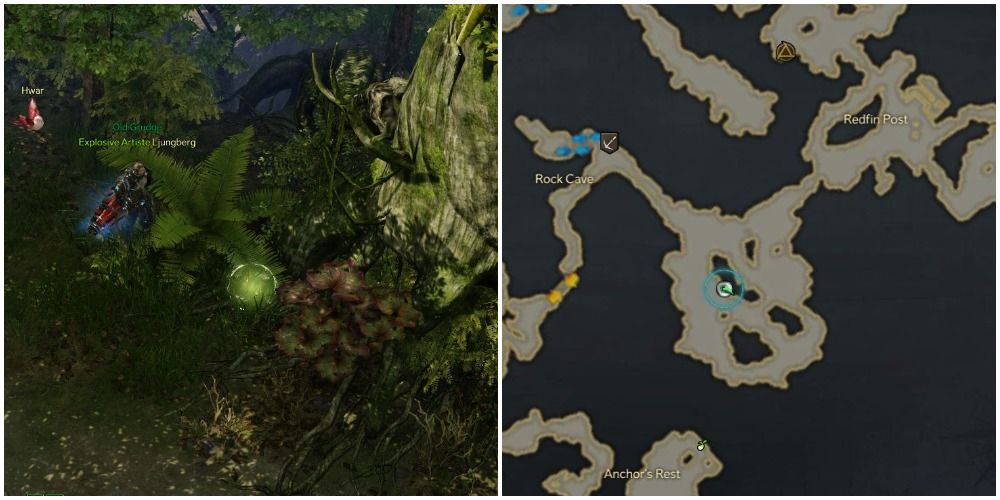 Head northeast past Rock Cave, following the path southeast into the area southwest of Redfin Post. The fourteenth mokoko seed is in the middle of this area, in the roots at the base of a large tree. It’s on the south side of the first tree you come to as you enter the area from the northwest corner. 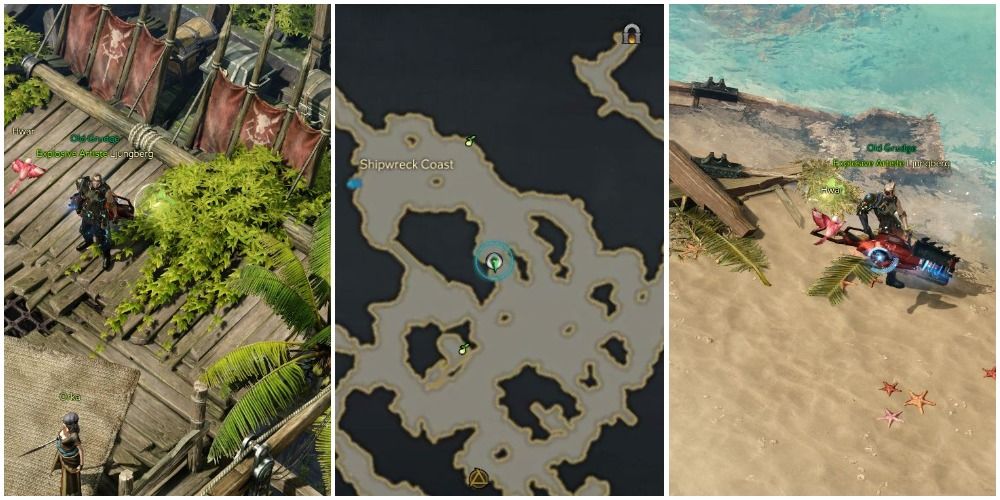 From the Black Fox Assembly Area Triport, walk directly north through the shallows (past Benya) until you come to a large wooden structure. A crane is holding a huge sack of fish. Go right off this until you see some wooden stairs. Head up the stairs to Orka. Just behind her, slightly hidden in the foliage there, you’ll see the fifteen mokoko.

Go back to the shallows and continue north through them to Shipwreck Coast. Head directly north, to the north edge of the area, and you should see a green-tinged cannon next to the hull of a wrecked ship. From there, follow the edge of the map northwest to a small boat sunk in shallow water. The sixteenth seed is in some seaweed by the hull of the small boat. 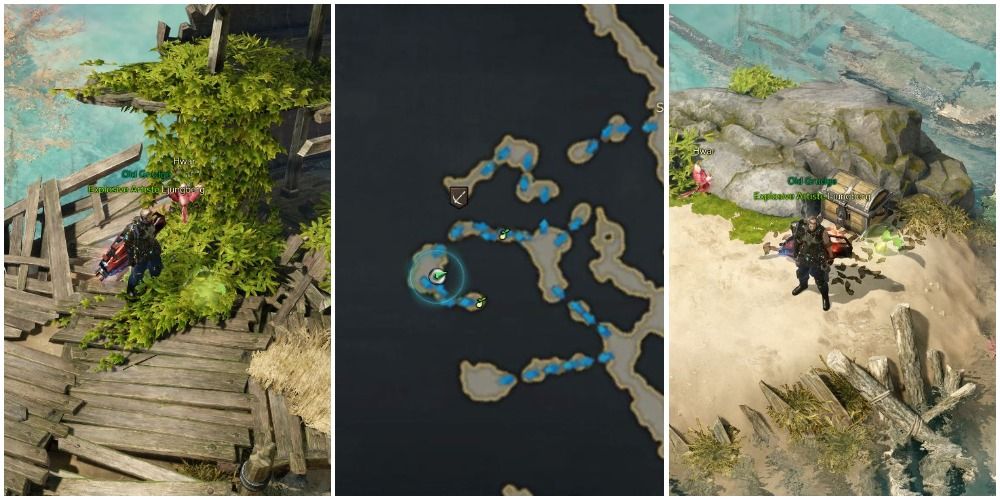 Your last two seeds of Croconys Shore are west of Shipwreck Coast, in the area of small islands you need to jump between to progress. If you again head out from the wooden structure where Orka is, go west to the first two jump points and take the north-west facing one of the two. You’ll jump onto a small island, then a larger one with three northern jump spots. Take the left-hand one onto a very small island for your seventeenth mokoko. It's between the two jump points in the leaves.

Keep heading west, then south, and finally east, for another four jumps, until you get to the final little island. Your last seed is in plain sight next to the treasure chest.