After weeks of testing and months of promising, Wizards of the Coast has announced it will be introducing a new format to Magic The Gathering Arena in today's update in response to the backlash it has faced over the introduction of the controversial digital-exclusive Alchemy.

Explorer is being introduced as something of a temporary format, serving as a stopgap while Wizards works on introducing the wider card pool to the game required for the often-requested Pioneer format.

Outlined in a blog post on the official MTG website, Explorer is effectively everything Alchemy isn't: it is a nonrotating (meaning cards don't leave it in the same way they do Standard or Alchemy) format that aims to recreate the "true-to-tabletop" experience. This means Explorer won't be receiving the same digital errata's and digitally-exclusive mechanics we see in Alchemy and its own nonrotating counterpart, Historic.

Last December, when Wizards introduced Alchemy to Arena, players were upset that Historic quickly turned from the 'nonrotating Arena' experience it was originally billed as, into a digital-exclusive game that relied on the same controversial rebalanced cards and mechanics as Alchemy. In response, Wizards promised earlier this year to work on a format that filled the void left by Historic's change, which leads us to today's announcement of Explorer. 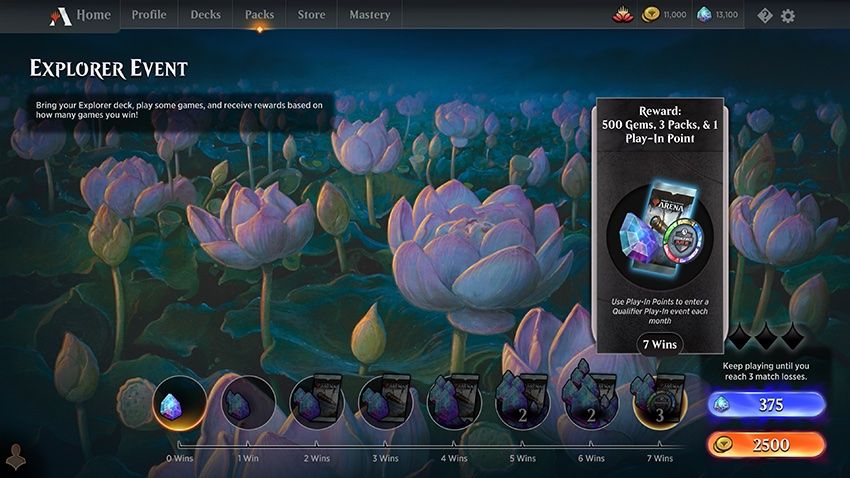 However, more than just being what Historic was before Alchemy was introduced, Wizards has confirmed Explorer will instead share more DNA with the popular tabletop format Pioneer (which is a nonrotating format that uses cards released from Return to Ravnica to today). For a card to be legal in Explorer, it needs to also be legal in Pioneer – which is most cards in Arena. It'll even have the same ban list as Pioneer at launch, although Wizards has said it will be banning problematic cards in Explorer without necessarily matching that ban in Pioneer. On the plus side, cards banned in Explorer will reimburse you with wildcards, something that doesn't happen in Alchemy or Historic when a card is rebalanced instead.

In the long term, the goal for Explorer is for it to simply become Pioneer. Over time, more cards "important to Pioneer" will be added to the game, such as in the upcoming Historic Anthology 6, which will include cards intended for both Historic and Explorer. Arena's Pioneer may not ever have the full card pool of the format, as Pioneer has lots of chaff cards that rarely see play, but the goal will be to recreate the "Pioneer Constructed Meta". According to the blog post, by the time Explorer becomes Pioneer, "the decks you want to play will be available".

Explorer will available as a best-of-one and best-of-three queue in both ranked and unranked play after the update scheduled for later today (April 21). There will also be in-game events for Explorer, such as the Explorer Metagame Challenge and Constructed challenge.