Magic: The Gathering – The Best 10 Cards For Pauper In Streets Of New Capenna

Streets Of New Capenna is the latest set released for Magic: The Gathering, and with it comes a ton of new cards. The common rarity cards of the set are more than just for draft, as there are some cards in there that will be great for Pauper.

Pauper is Magic: The Gathering's all common format. Any card ever printed at the common rarity is playable, and every set introduces a ton of new cards to this format. It can be hard to keep track of due to how many commons there are. In Streets Of New Capenna, there are plenty of common cards that are worth a look at for your Pauper decks. We'll go over the very best below. 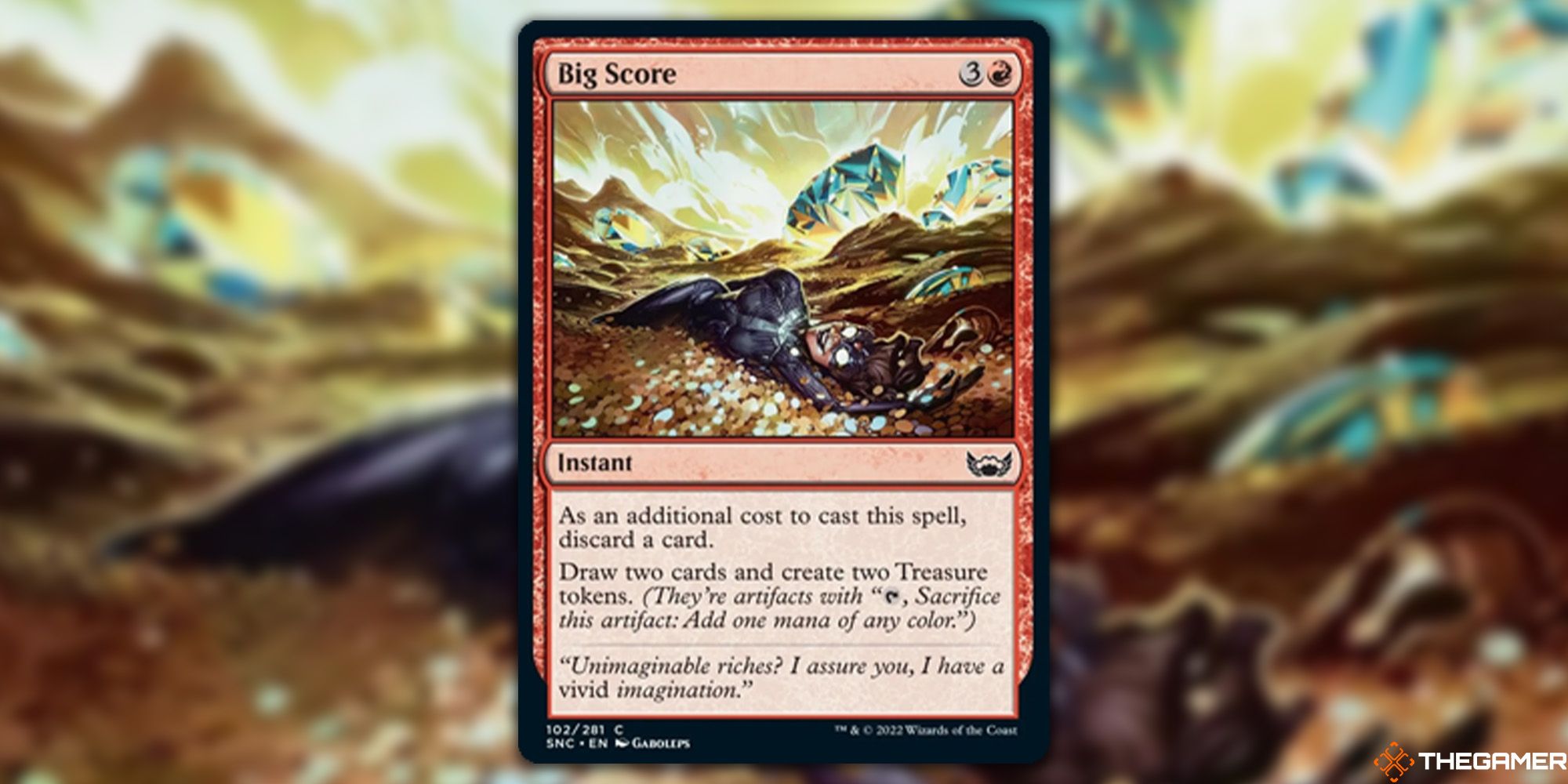 Big Score is a pseudo-reprint of Unexpected Windfall from Adventures in the Forgotten Realms, only Big Score is easier to cast, as it only needs one red mana instead of two to cast.

By discarding a card, you get to draw two and make two treasure tokens. This essentially makes it a draw two for two mana since you get access to two mana back right away. It's an instant as well, allowing you to use it during the end step when you don't need to keep all your mana up for interaction. 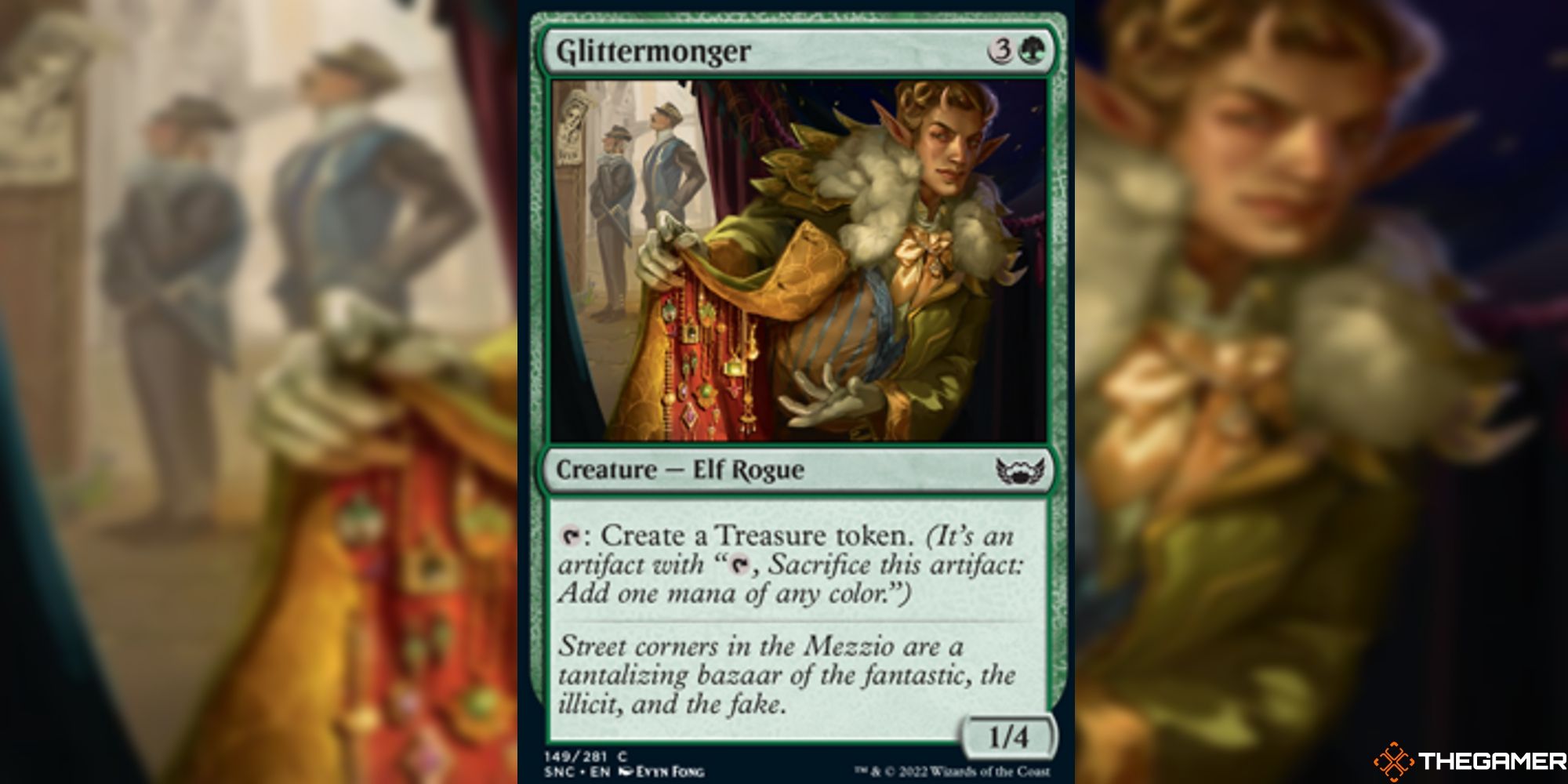 Glittermonger is a common that will slot into decks running green that are a bit more on the grindy side. For four mana, you get a creature with a decent 1/4 statline that can tap itself to create a treasure token.

There are a lot of great commons that cost a lot of mana, namely in cascade decks. Glittermonger can be used as a mana dork that can both block and give you mana that you don't have to spend right away. Since all the cascade creatures cost a lot, Glittermonger will help you get to them faster, as well as allow you to keep mana up for interaction. 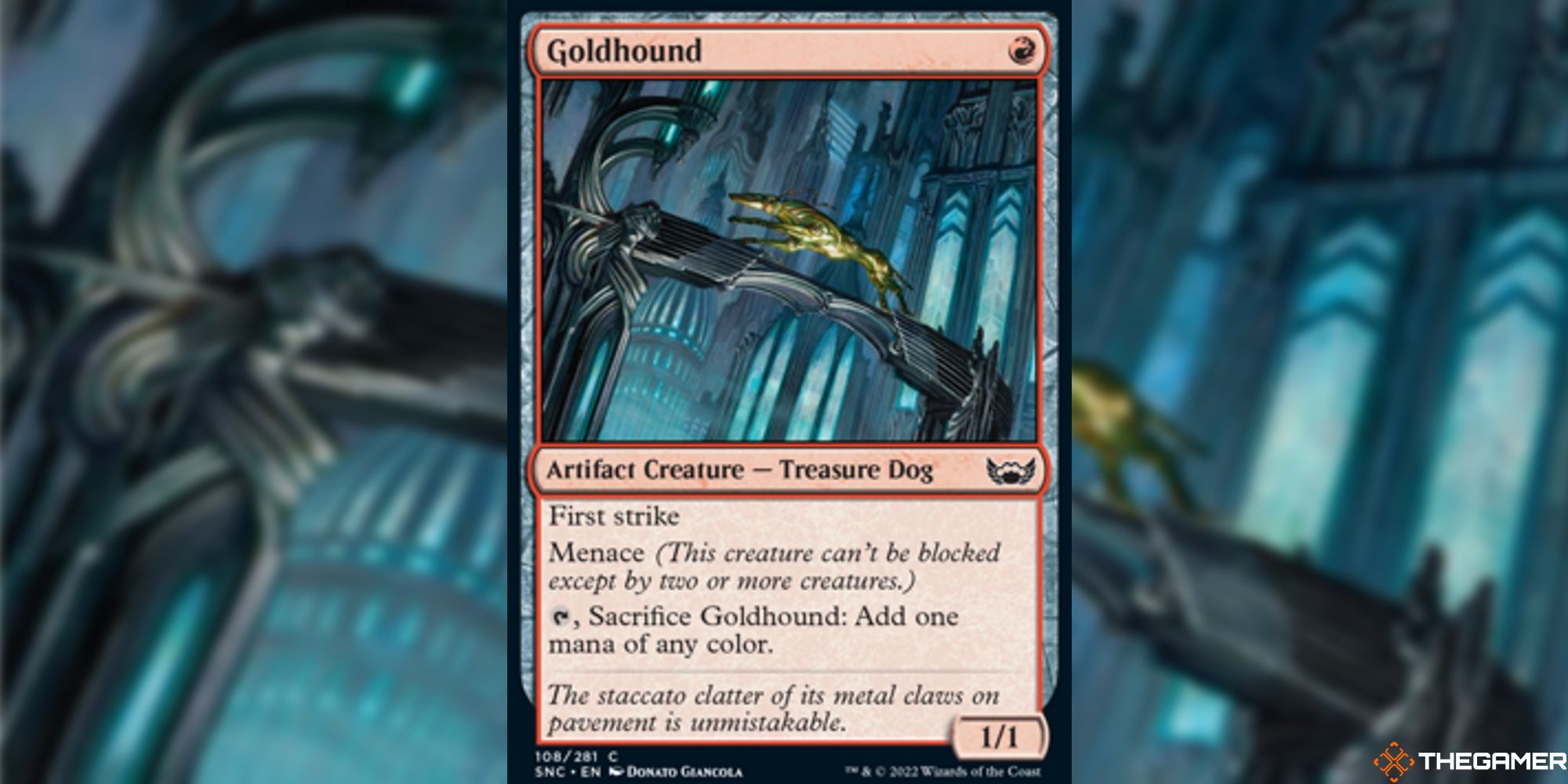 Goldhound is a fantastic one-drop for decks looking to be aggressive early before ramping into stronger creatures and spells. It only costs one Red mana to cast and gives you a 1/1 creature with both first strike and menace.

Goldhound allows you to get in for some chip damage early. Once the board has gotten a bit too out of hand, Goldhound can be used as a treasure token. This helps you to advance your board state into stronger monsters. Goldhound will slot in perfectly in aggressive Red decks in Pauper, as well as decks looking or cheap, easy mana to have access to. 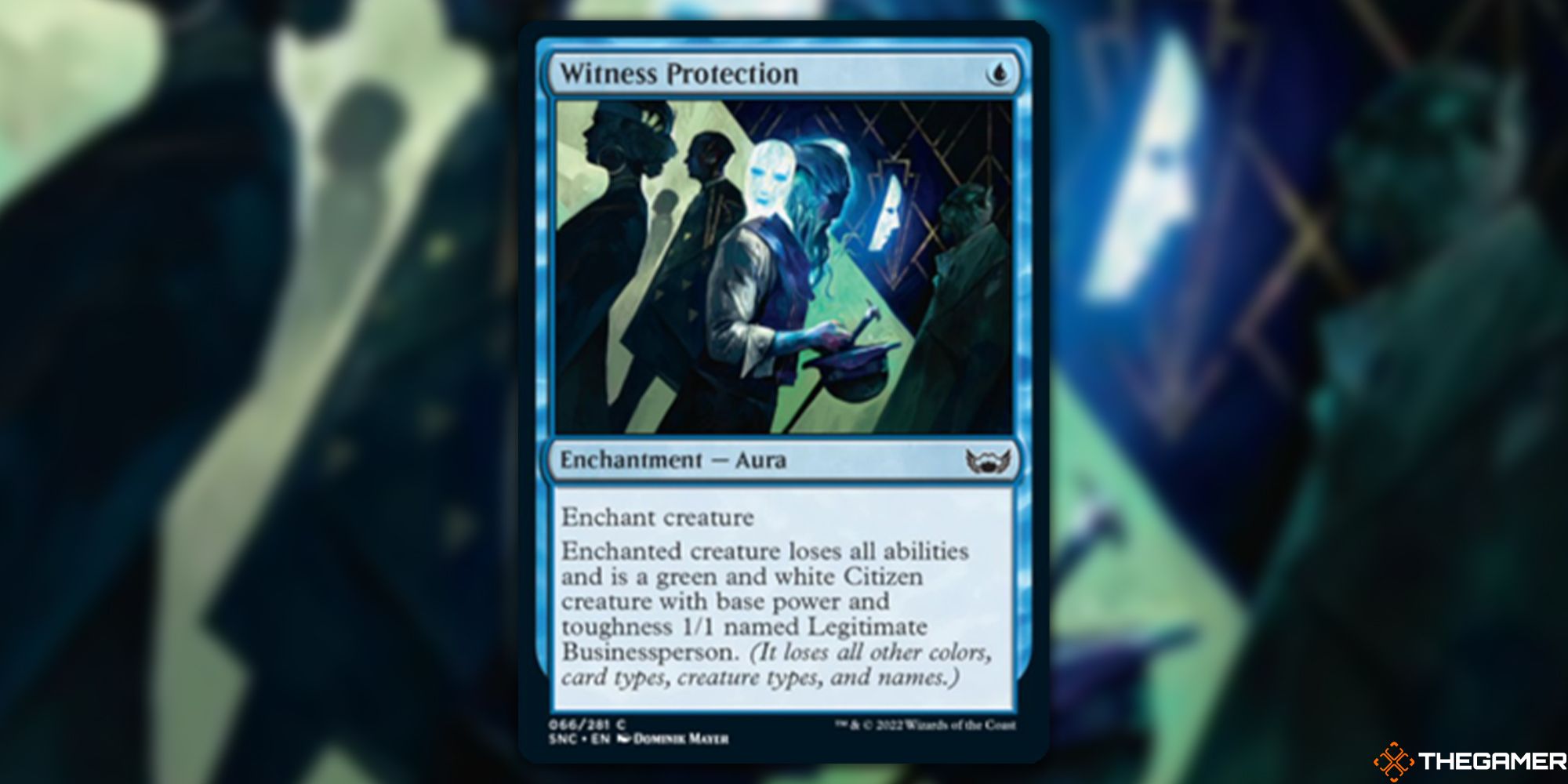 Witness Protection is very easy to cast and will make a great sideboard card in decks that run Blue. It only costs one mana to cast and turns any creature into a 1/1 humorously named Legitimate Businessperson. It will also lose all abilities.

There aren't a ton of powerful lingering effects in Pauper, but having access to a way to negate them makes Witness Protection perfect for the sideboard. It can shut down problem elves, for example, turning off one of their value-generating elves. Worst case, it can be used to make a threatening creature into a 1/1 against decks running creatures with high statlines. 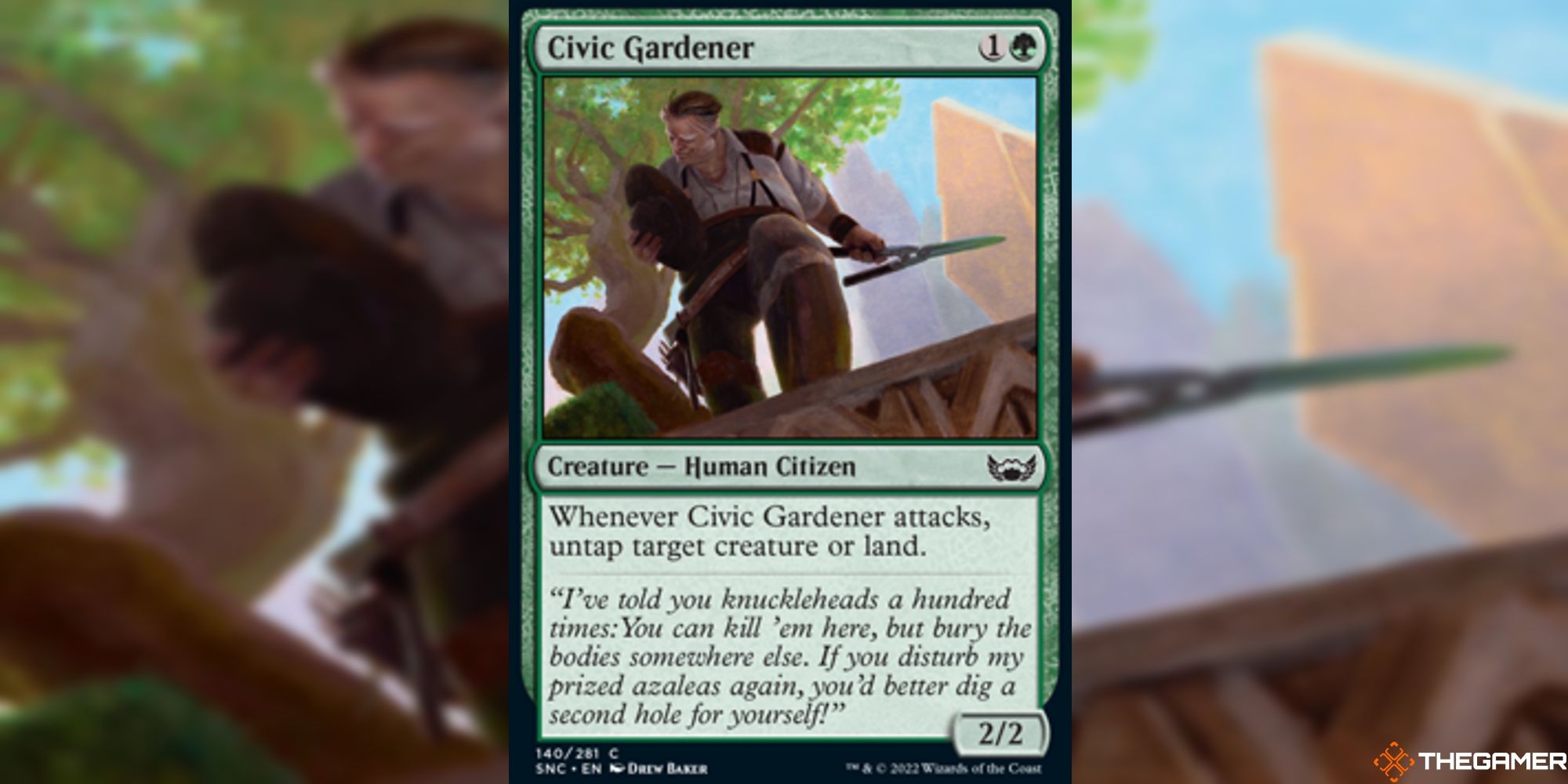 Civic Gardener is a great card for a two-drop. Its effect is simple: it allows you to untap a creature or land whenever it attacks. This allows you to untap your mana dorks to let them give you more mana, or get a powerful creature untapped to ensure you have a good blocker up for your opponent's turn.

It's great for aggressive decks like Gruul Aggro or Mono-Green Stompy. It lets you untap your lands to allow you to cast your pump spells to deal massive amounts of damage in just one turn. 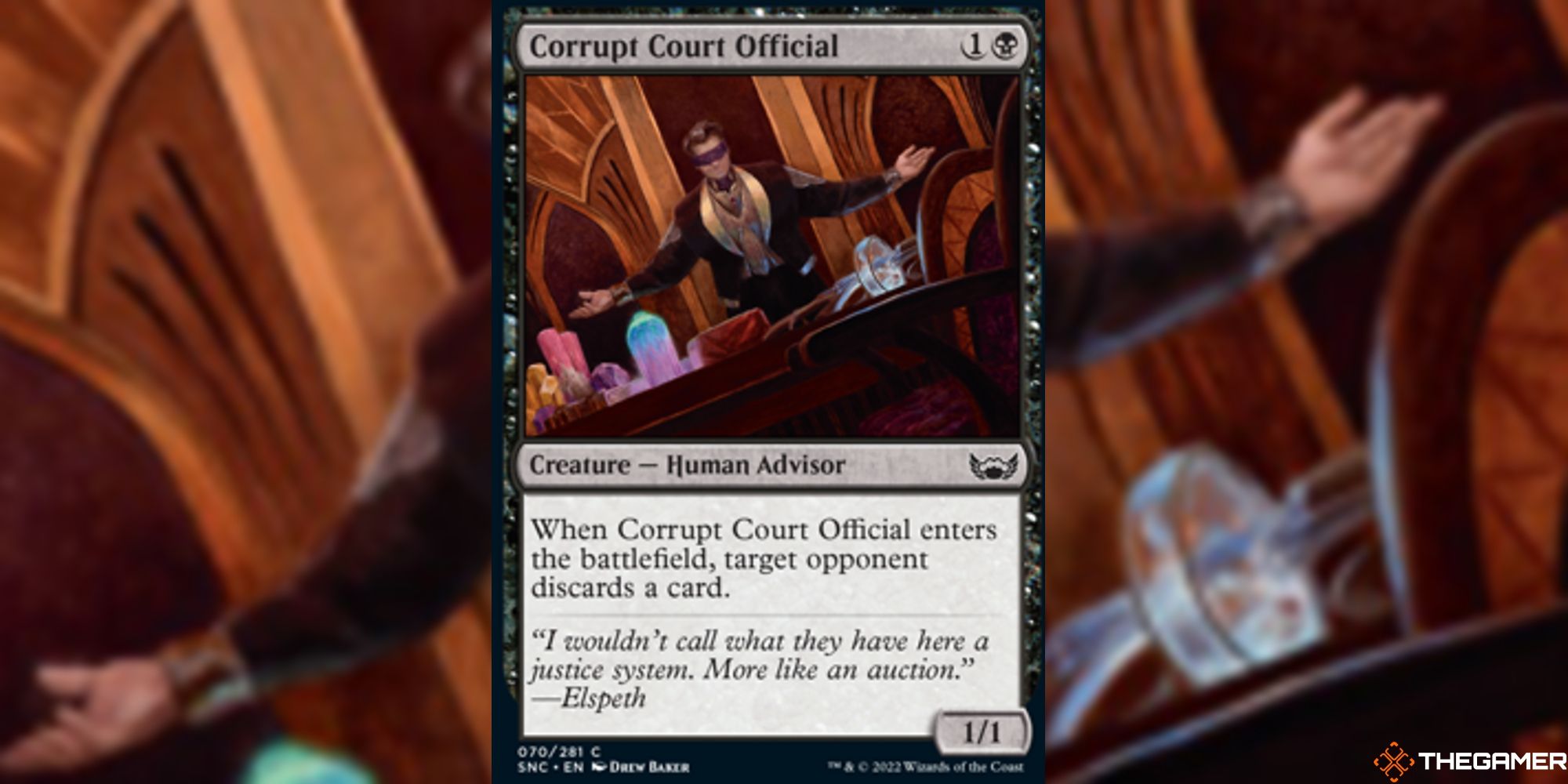 While not a new card, Corrupt Court Official was a very expensive card that got a nice reprint in Streets Of New Capenna to make it much more accessible to Pauper players. When it enters the battlefield, the opponent discards a card. 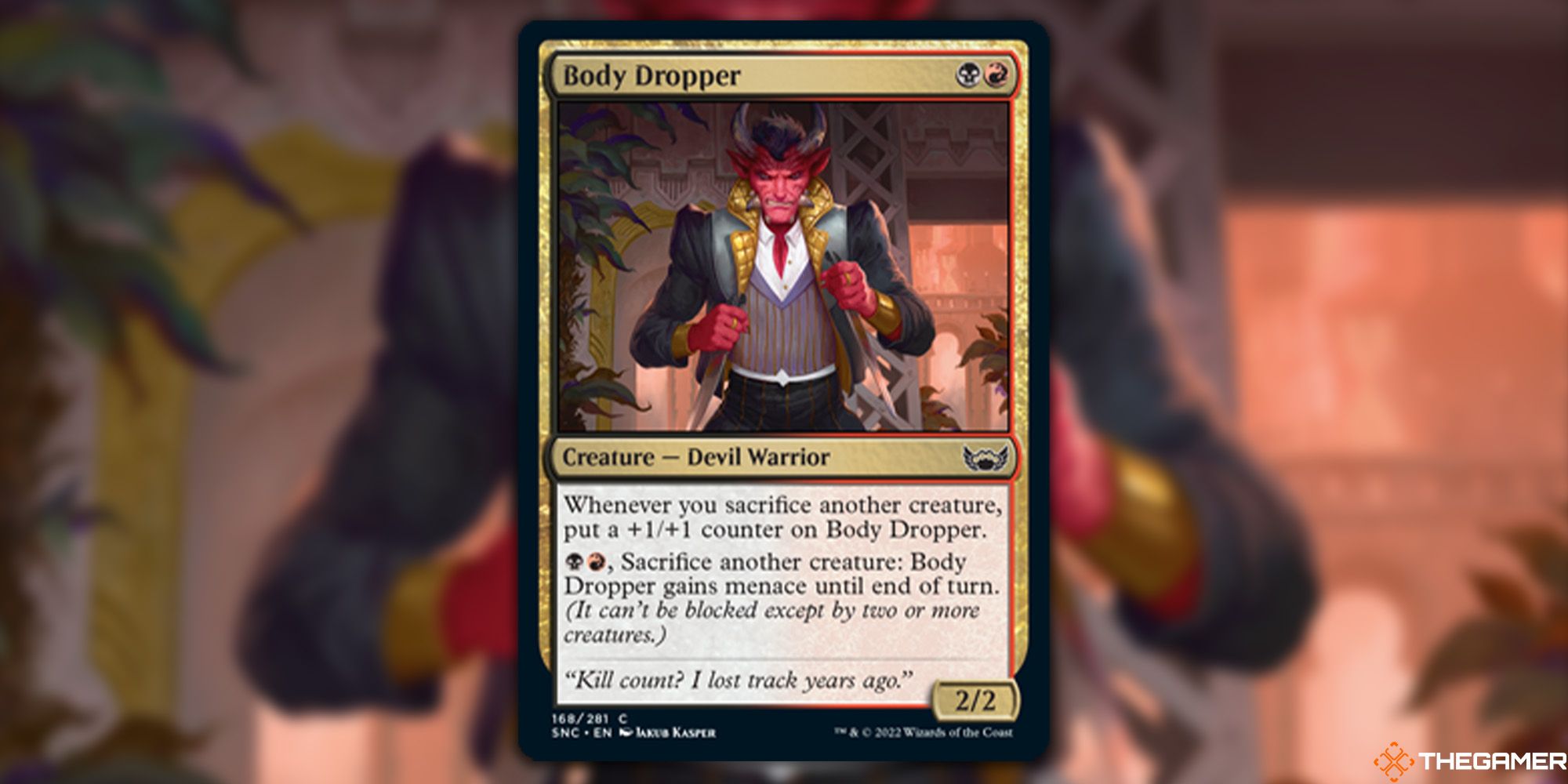 Body Dropper is a fantastic card in Pauper for any sacrifice decks. It synergizes well with cards with persist and undying, and can open up the door for a brand new archetype that can rise the ranks in Pauper.

There are plenty of strong discard outlets available in Pauper, which can lead Body Dropper to grow to huge stats. Body Dropper doesn't trigger only once per turn, meaning you can easily boost it up all in one turn. Fling is still legal as well, allowing for a game-ending combo with a large Body Dropper. 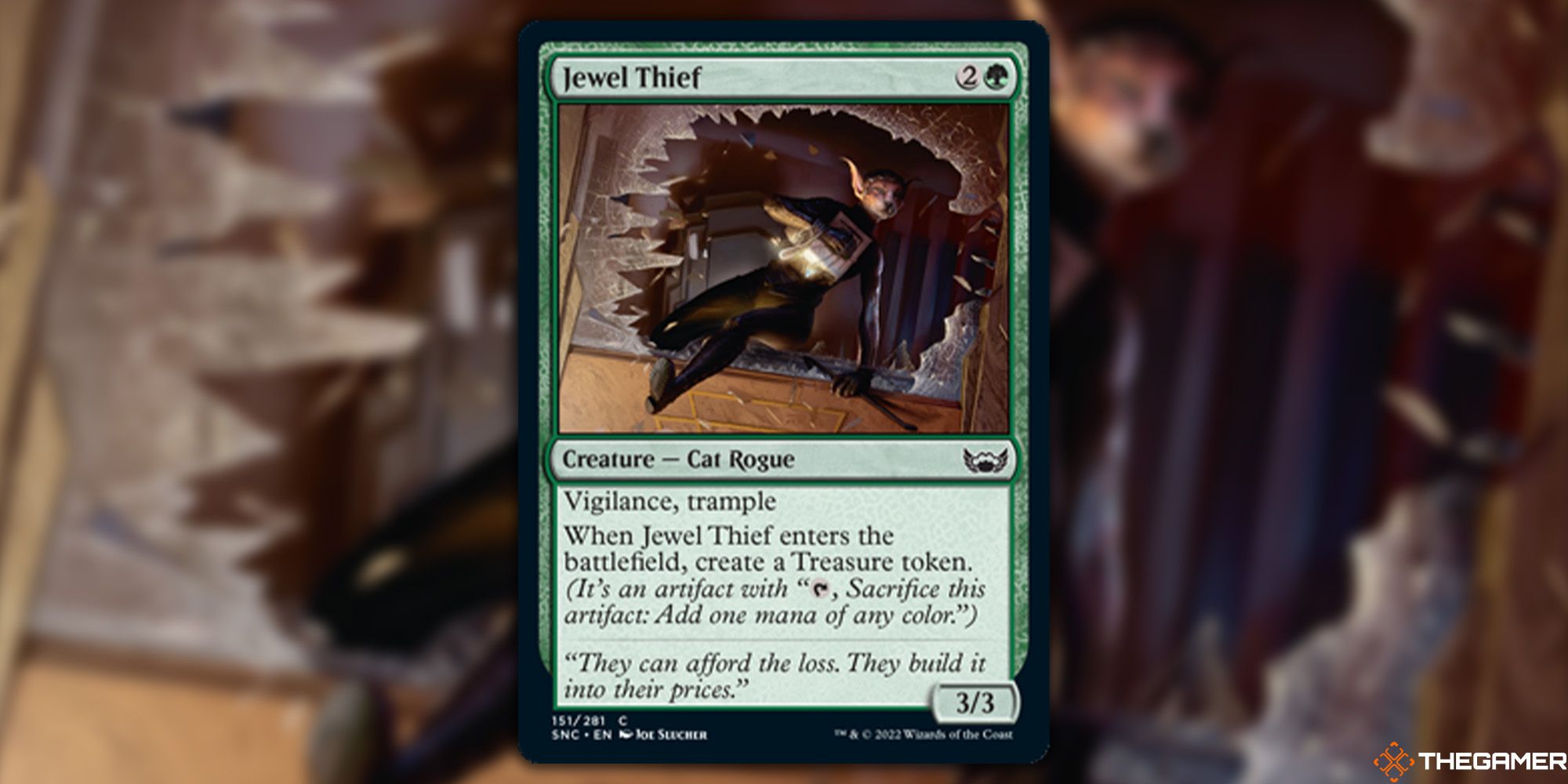 Jewel Thief is a fantastic three-drop for Pauper decks, namely the Stompy archetype. It's a 3/3 with both vigilance and trample. It will also make a treasure token when it enters the battlefield. This card is easy to cast, especially in green decks that generally run mana dorks, to begin with.

This gives you a threat that will stick around, and with built-in trample can become a huge threat with pump spells like Vines Of Vastwood and Titanic Growth. Its vigilance helps it to stick around as a threatening blocker, as 3/3 is nothing to scoff at. 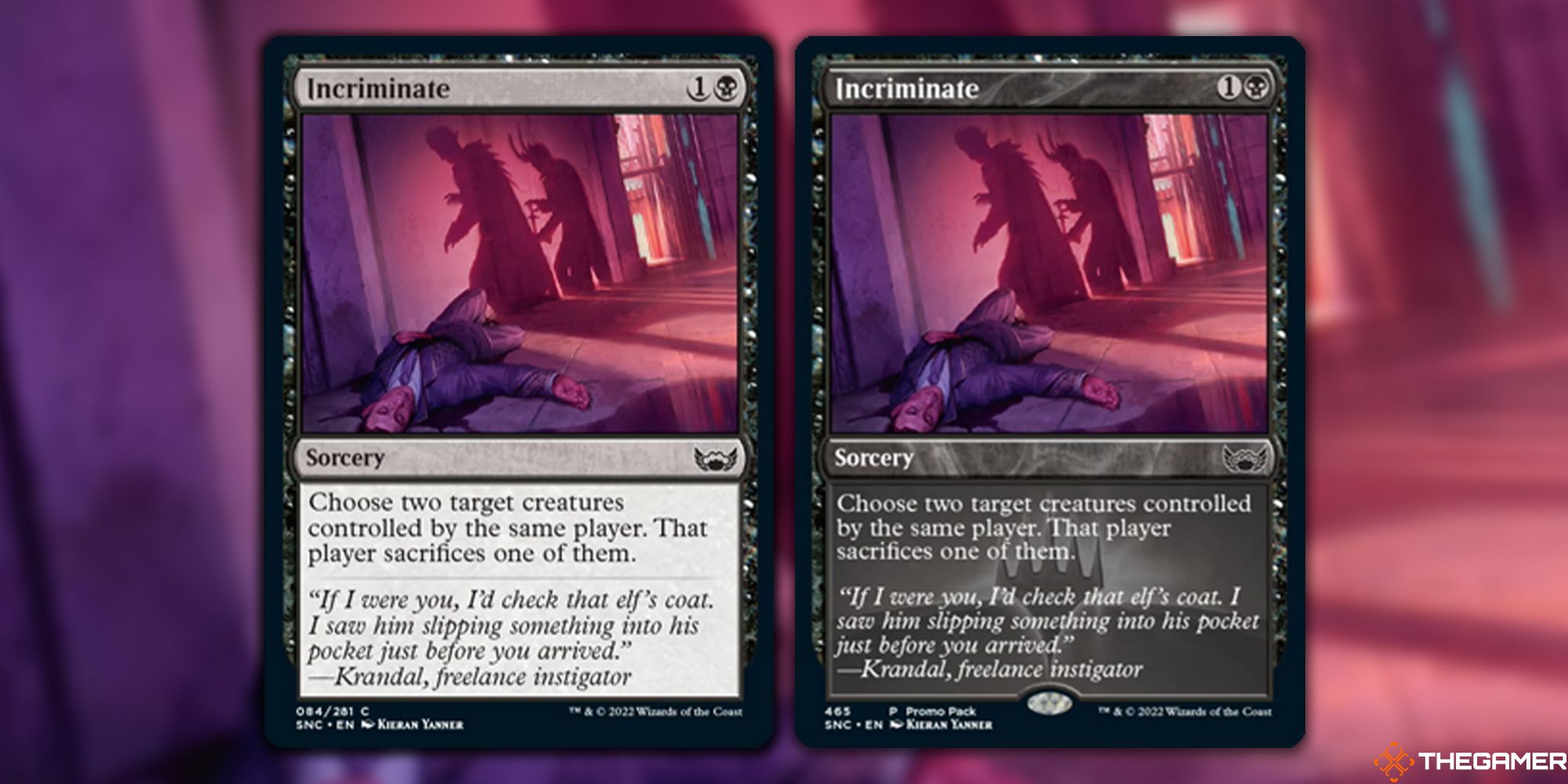 Incriminate is a fantastic removal spell, and helps you to get around indestructible creatures. It requires you to target two creatures the opponent controls and forces them to sacrifice one of them.

Incriminate is great for taking care of a problem creature, and when mixed with other removal spells, it may even be able to get rid of both of them. It forces the opponent to have to get rid of one of their best creatures and helps to start getting a board state in control if the opponent has a board that got out of hand. 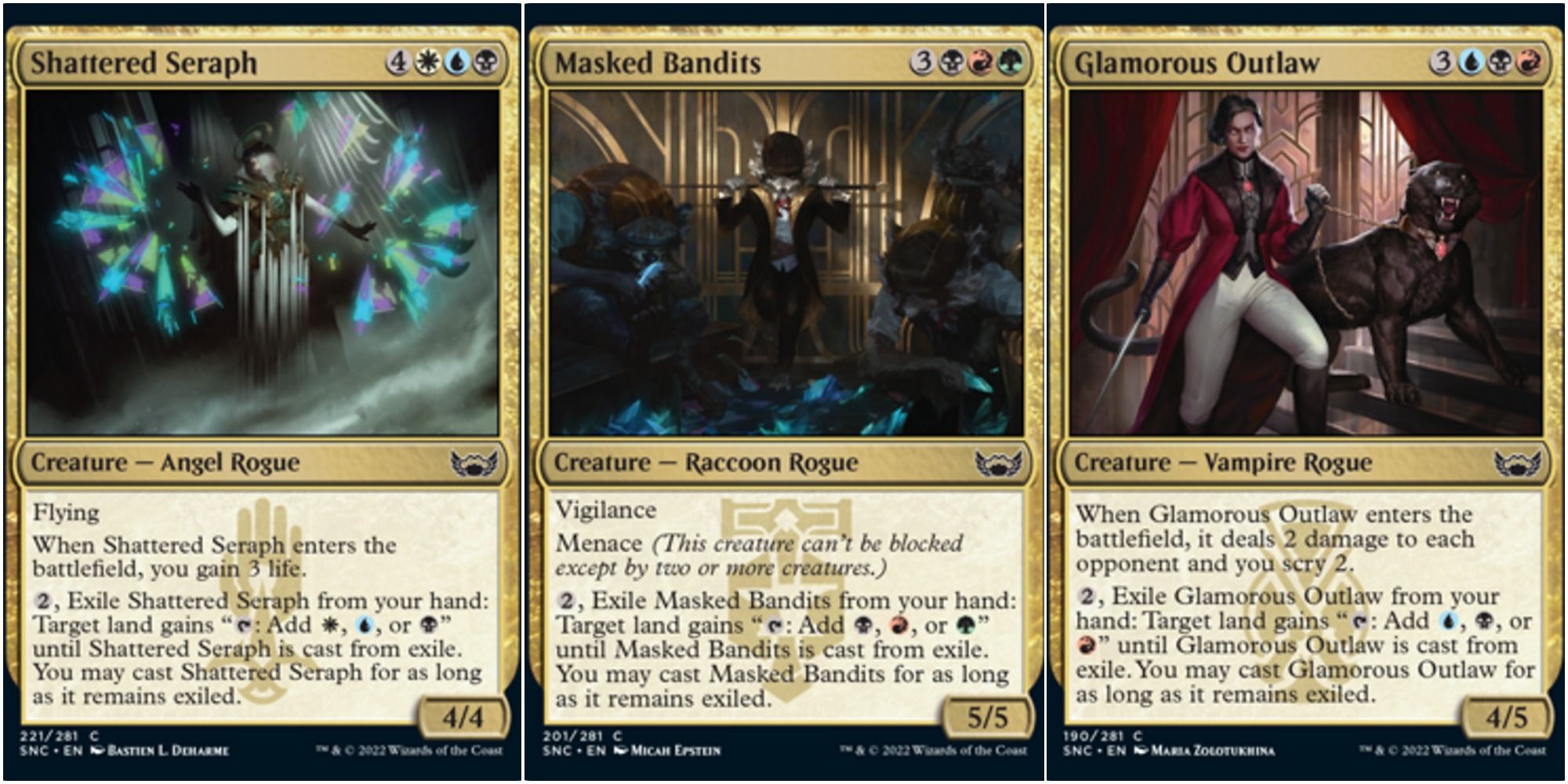 There are no easy ways to get tri-color land in Pauper. However, with the release of Streets Of New Capenna, a cycle of creatures has been released that can exile themselves for two mana to make a land be able to tap for any of three different colors.

This allows mana fixing for decks that don't run mana rocks like Prophetic Prism. The creatures are all rather nice when they are cast as well, and can be played from exile. They are very versatile creatures, sure to make a splash in any deck running three or more colors.