Minecraft: How To Make An XP Farm With A Spider Spawner

You’re playing Minecraft and want to enchant a sword, but you only have one level. To gain more experience to level up, you can do a variety of small tasks that will take a long time, or you can create an XP farm from a spider spawner!

Spider spawners will, as the name implies, spawn spiders in an area. The spiders will drop loot in addition to experience, and this can be exploited through an XP farm. With this farm, you can spawn dozens of spiders that will clump together in a small area. Once the spiders are here, all you have to do is swing your sword, kill them, and enjoy the easy XP.

Check out this step-by-step guide on how to build an efficient XP farm from a spider spawner, and get to level 30 in no time! This build is compatible with the 1.16 update of Minecraft. 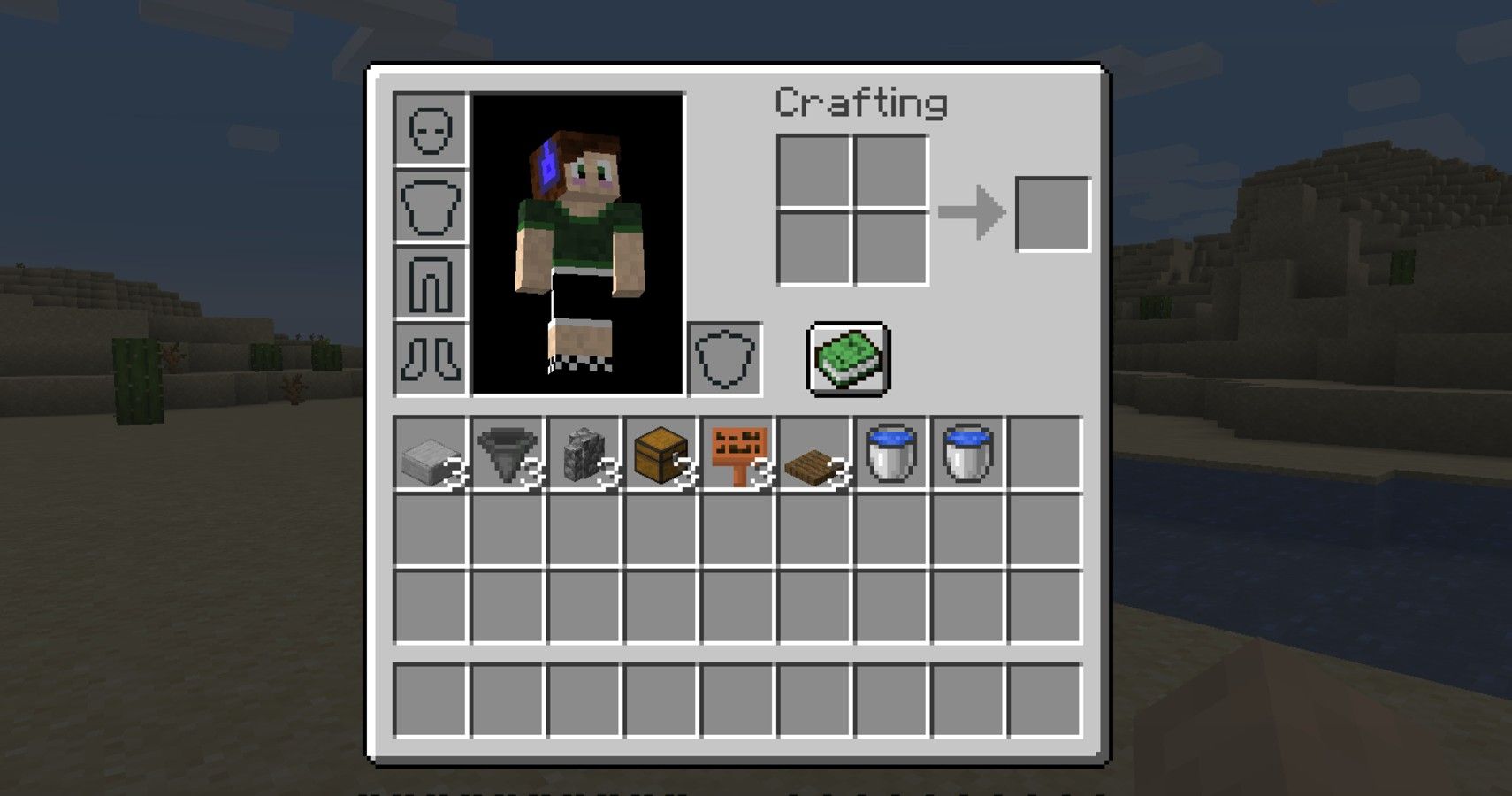 The materials for building a spider spawner farm are pretty simple: 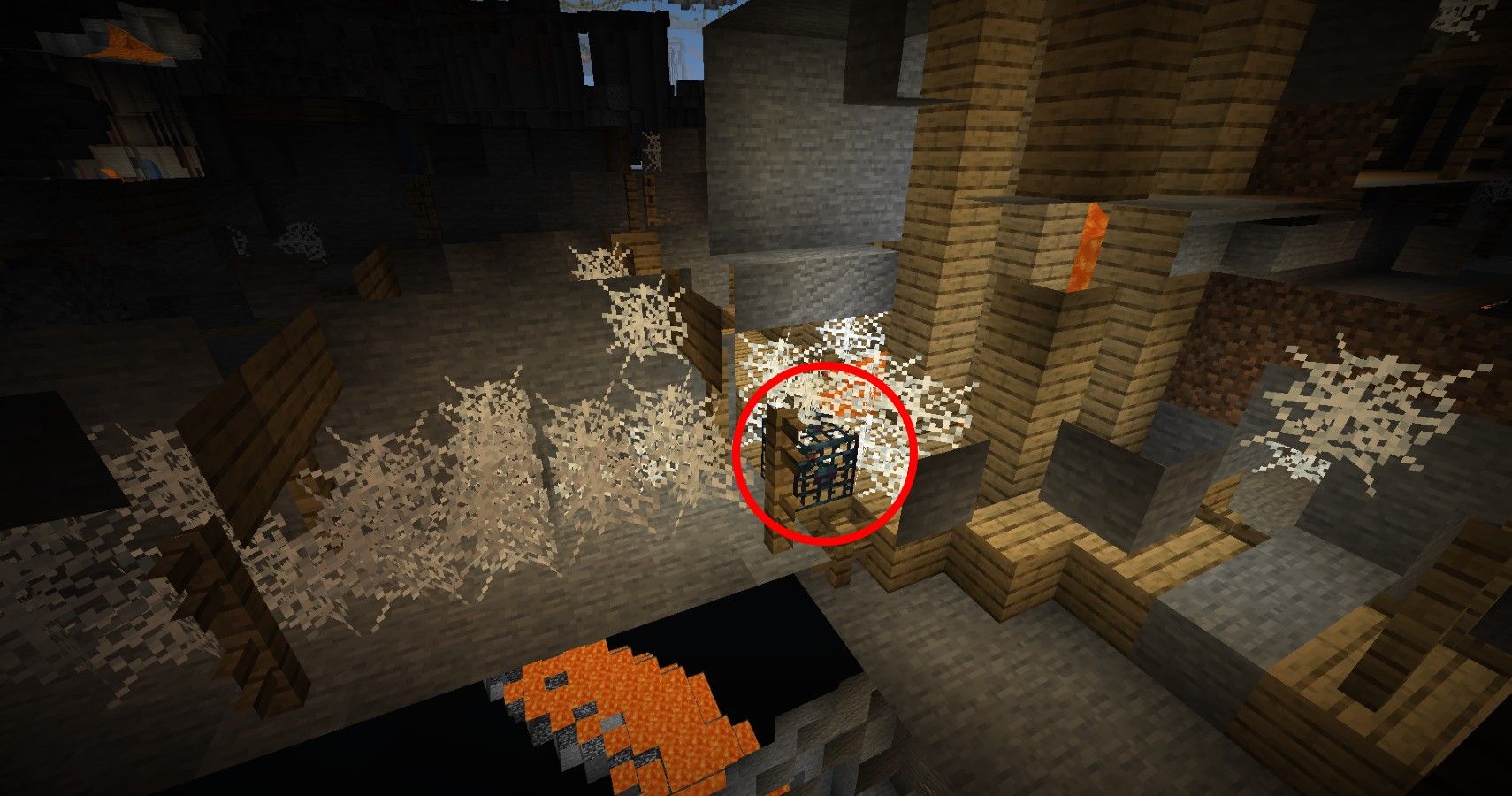 The first step to making a spider spawner farm is finding a spawner. Thankfully, they are pretty easy to find.

Spider spawners can be found in abandoned mineshafts, which will appear underground. These mineshafts will have wooden beams for structural support, and often have a rail track laid. The tunnels will also be very straight, and not appear like natural caves. Spider spawners will appear within these tunnels and are usually surrounded by cobwebs.

If you find a large clump of cobwebs in an abandoned mineshaft, then chances are, a spider spawner is nearby! 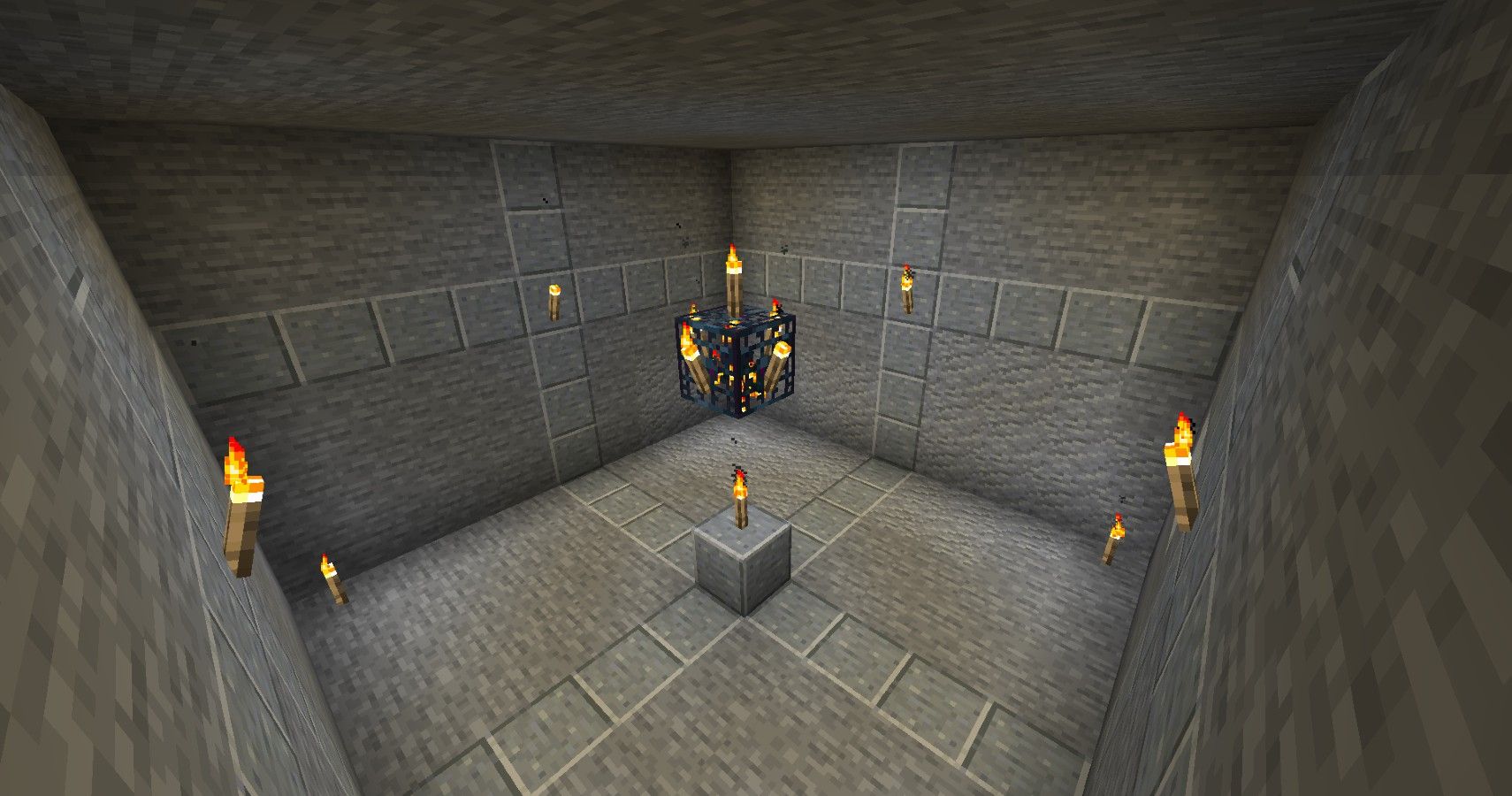 You’ve found a spider spawner, and now it’s time to prepare the area. To begin, dig out a 9×9 area around the spawner. While creating this room, make sure to light up the area with torches so no spiders spawn while you’re working. Place torches on each side of the spawner, as well as along each wall.

Dig 3 blocks below the spawner and 2 blocks above. Overall, the room should be 9x9x6. In the image above, you can easily count the number of blocks around the spawner, with a block marking the center of the floor. The squares going horizontally around the walls of the room are level with the spawner. 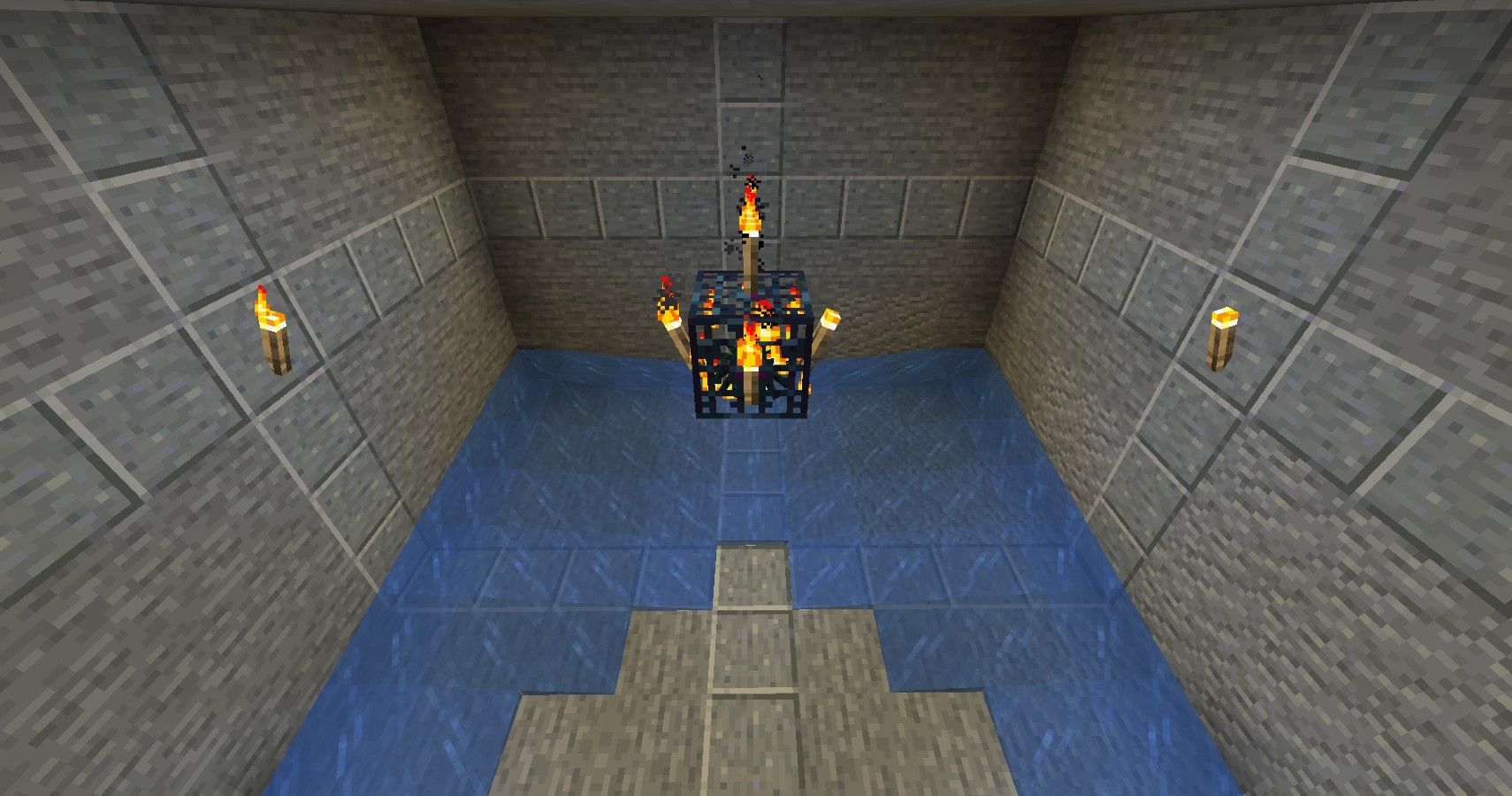 Now that you’ve created the area for the spider spawner, let’s create the farm! Follow the steps below to see how to make this farm.

Standing underneath the spawner, look away from the water sources. On the wall, dig out a 3×2 opening (the opening should be centered in the room). Dig the tunnel at least 7 blocks deep. This will be the collection area. 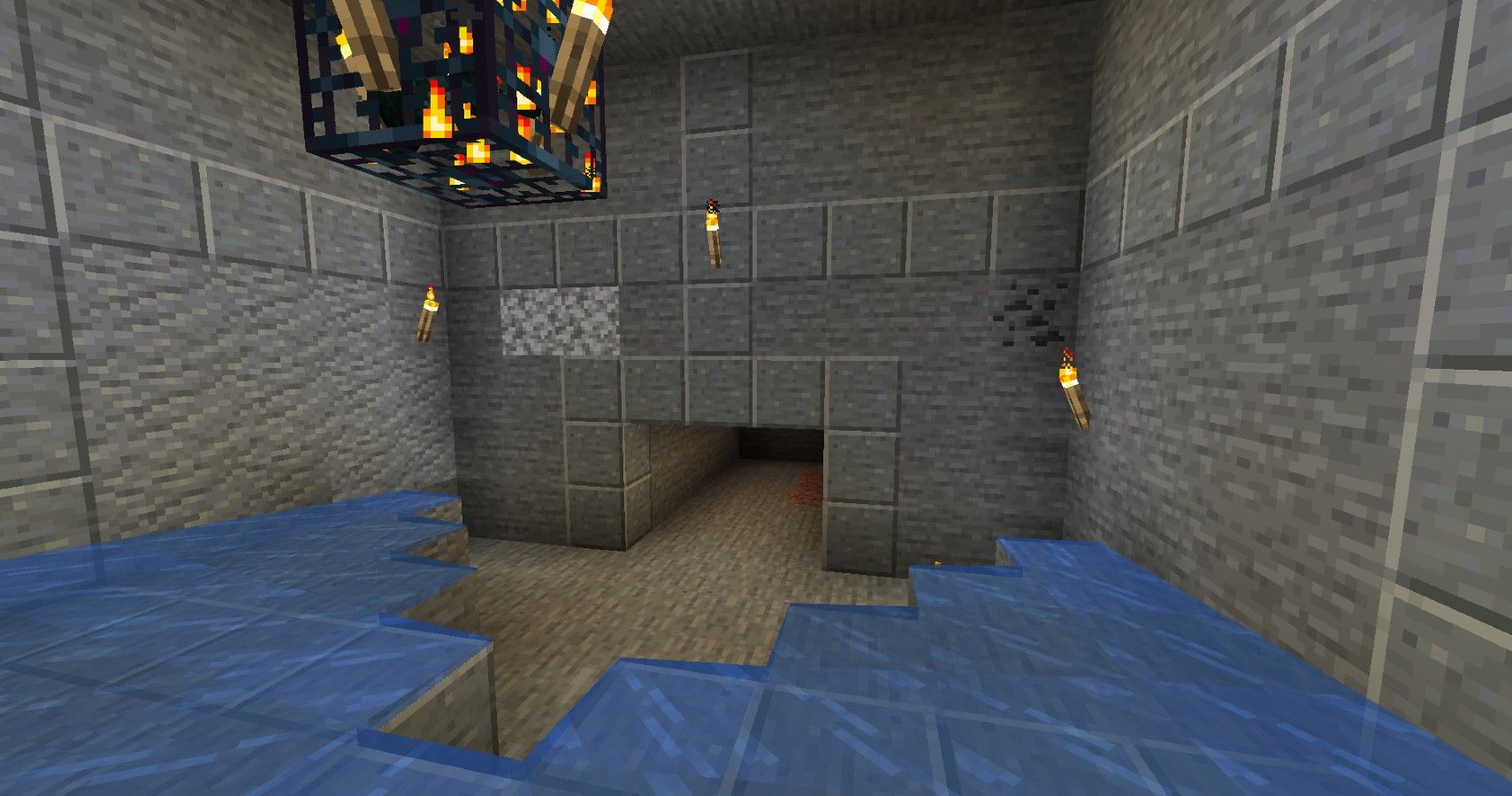 In the second row of blocks from the main room, place 3 signs. You will want them to be floating, with no signpost. To do this, just place one against the wall, and then place another sign directly on the side. 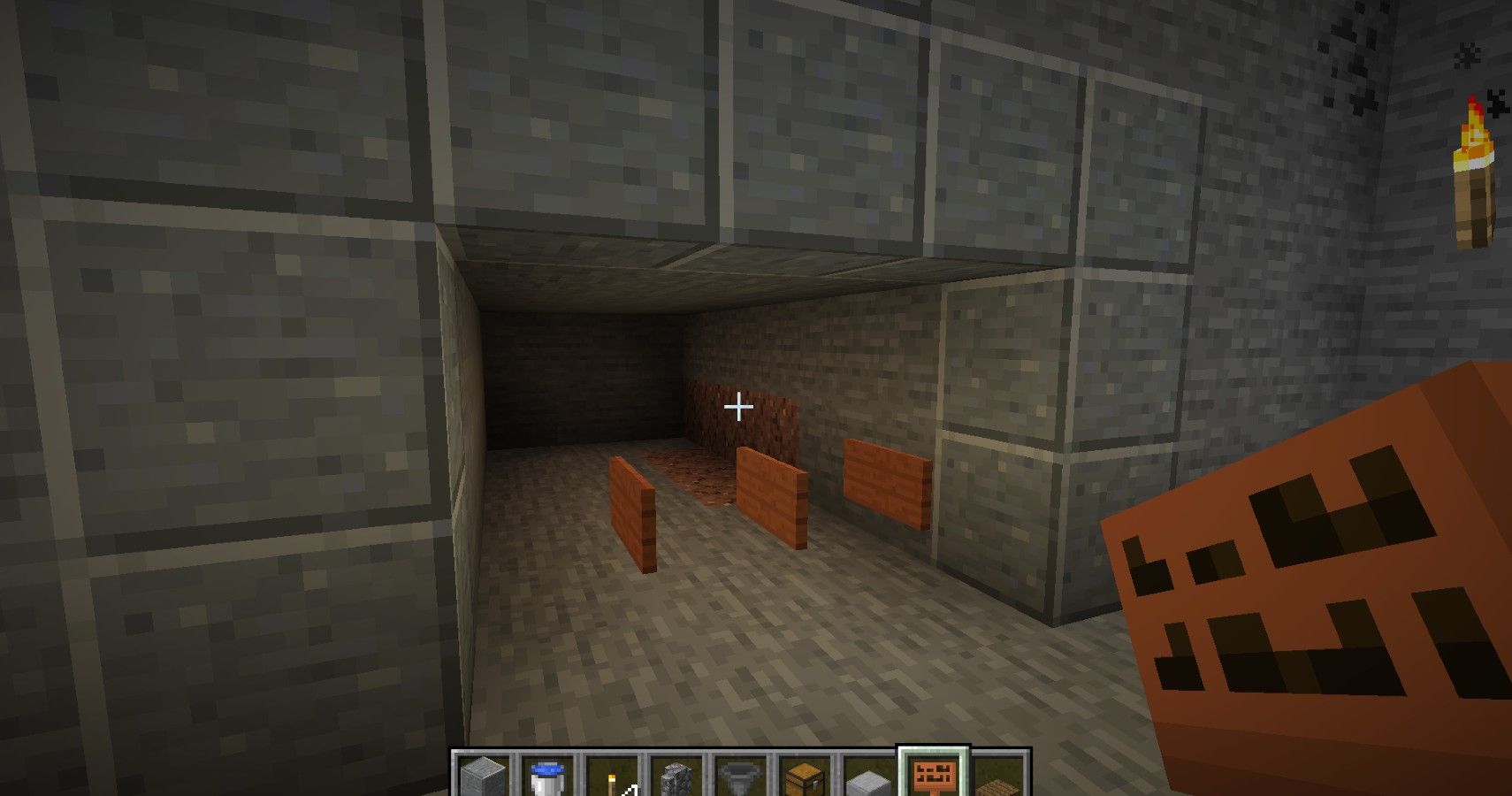 From the signs, count 2 blocks and then remove 1 layer of blocks in the tunnel. Here, you will leave a space and then place 3 chests.

In the empty space between the ‘step’ and chests, place 3 hoppers that connect to the chests. In the image below, you can see the signs, two spaces, a hopper, and then a chest. Place a slab on top of each hopper. 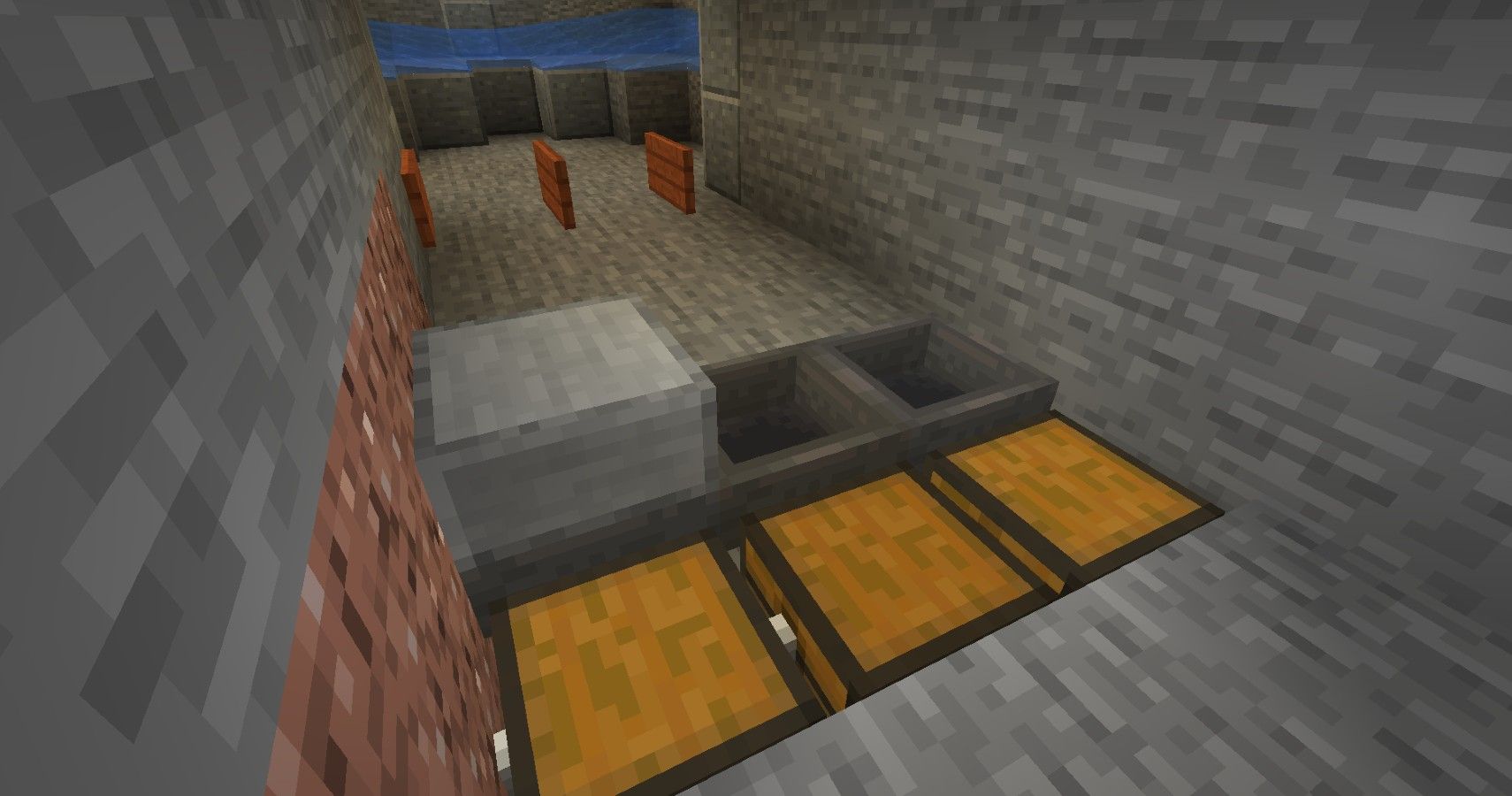 In the space closest to the hoppers, replace the block with 3 fences. Head back into the room and remove the blocks underneath the edges of the water. Now, the water should continue to flow until it reaches the signs. 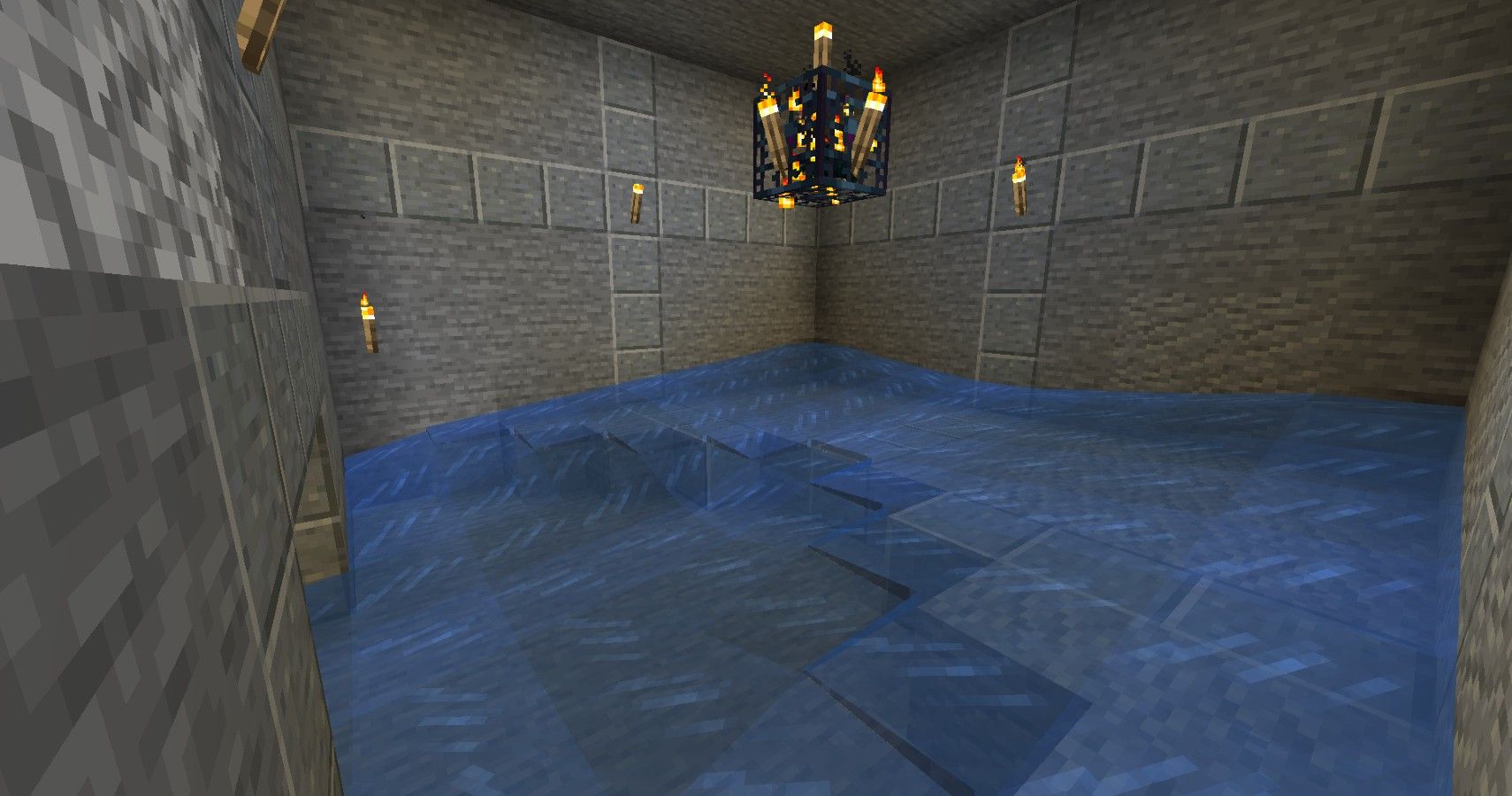 Remove all the torches and head back to the tunnel. In the area between the slabs and signs, place 2 water sources. They should be placed in the top corners, opposite of the hoppers. When you place it here, water should flow toward the hoppers. 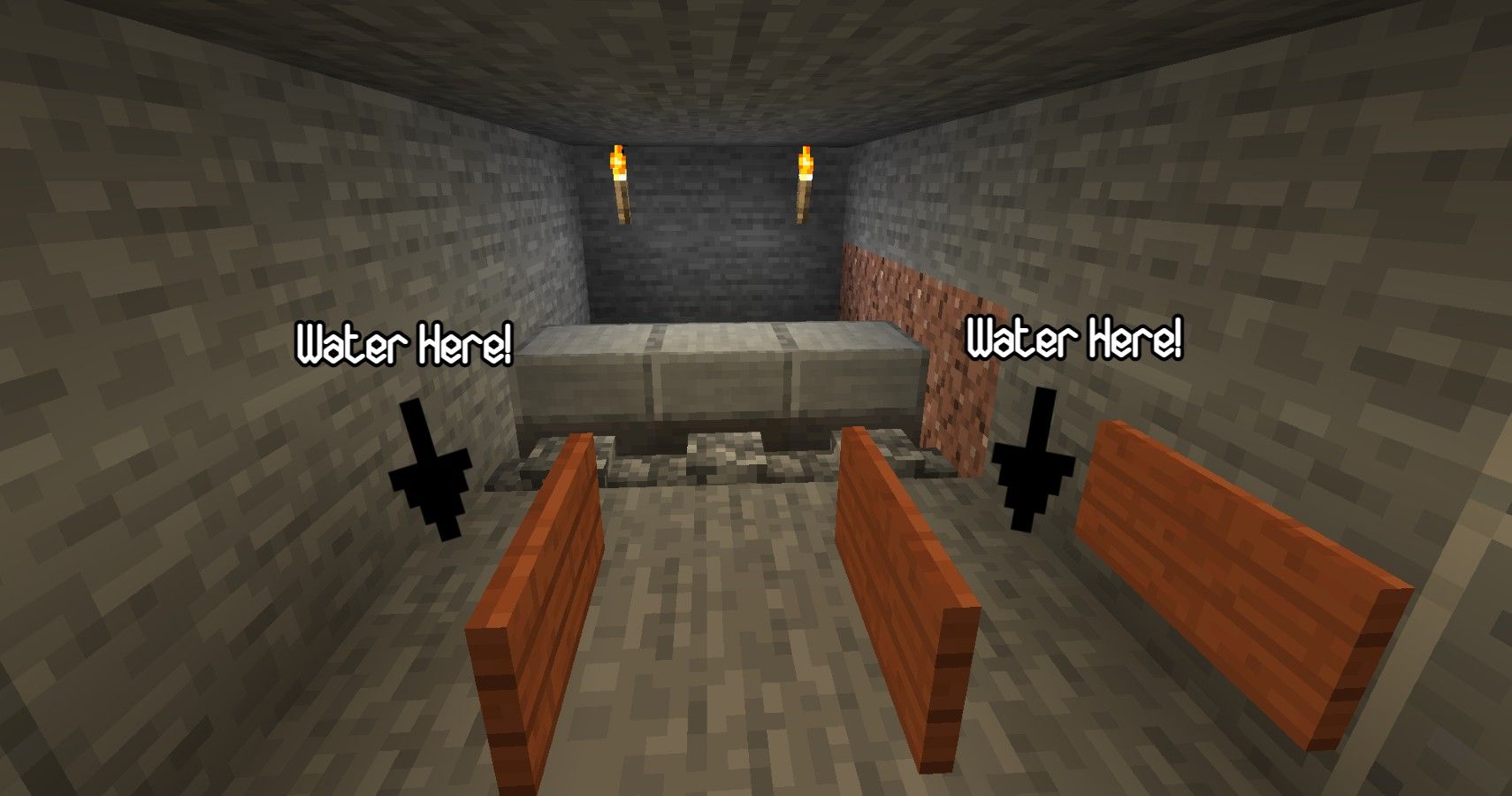 The tunnel is 2 blocks tall, so you will need to lower this to 1 block by placing a layer of blocks directly under the tunnel ceiling. You should not be able to fit through the tunnel now. Extend the blocks out to cover the chests. Underneath the blocks over the chest, add 3 trapdoors. 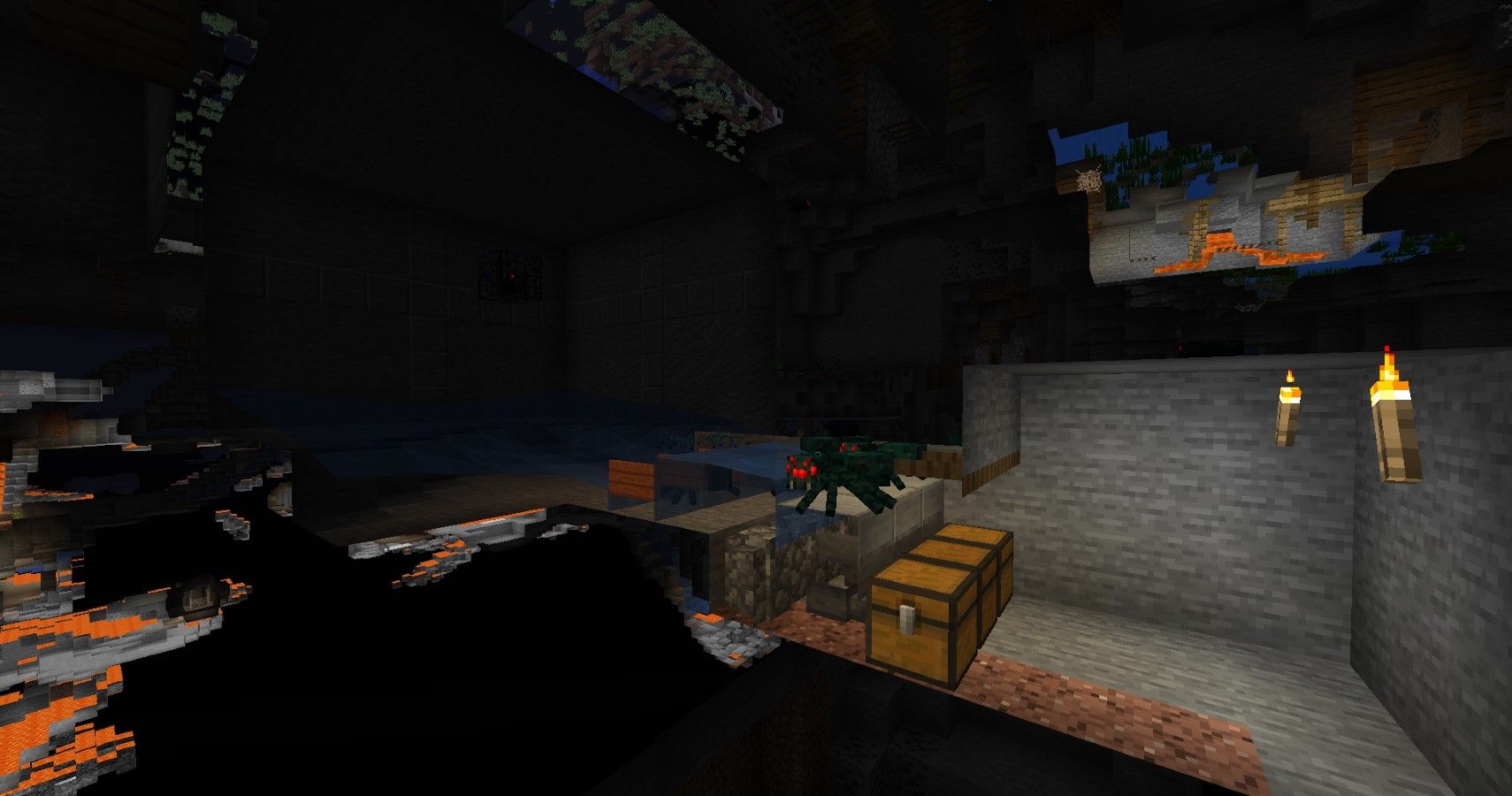 After you have finished these steps, you are done! Spiders should start spawning pretty quickly. Above, you can see the chests with hoppers connected.

The spiders will spawn in the dark room and be carried into the tunnel, where they will be trapped. The trapdoors above the chests prevent the spiders from hurting you. If you have followed the steps, you should quickly be able to kill groups of spiders without taking any damage. 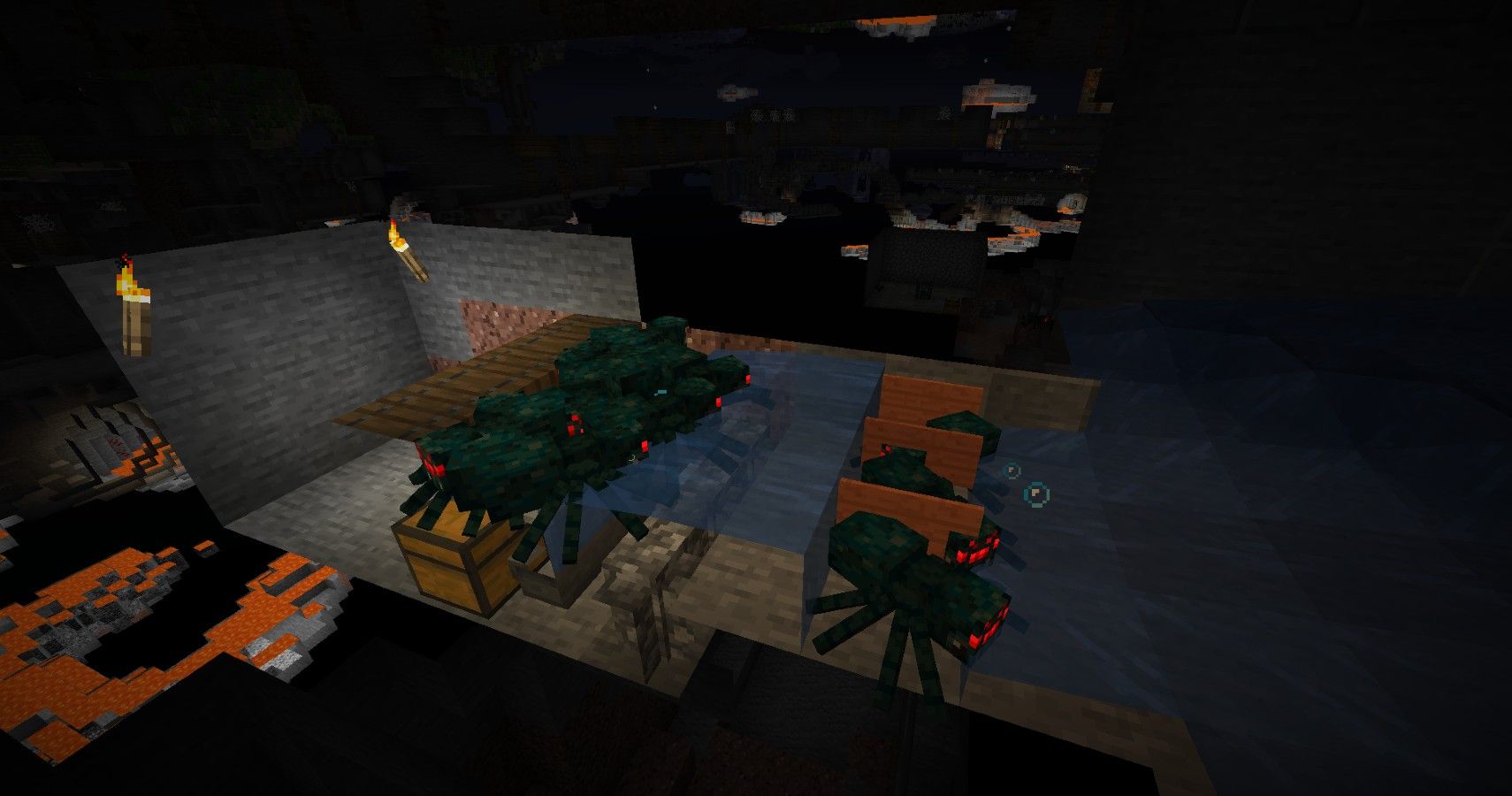 This spider spawner only works if you are nearby, but standing in front of the chests for a few minutes will spawn dozens of spiders. When you kill the spiders, their loot will drop into the chest, and you can collect any fallen XP.

The loot isn’t the most important; after a while, you will have a lot of string and spider eyes. Spider eyes are used in a few potions, but you won’t need that many. String can be traded with villagers to gain additional XP and emeralds.

You can decorate the collection area any way you want! One great idea is to place a few spare chests, an anvil, and a crafting table. Because this farm requires you to be nearby, try adding an AFK fishing farm near the collection area. With this, you can quickly farm for fish while the spiders spawn. After your done fishing, just head over to the spiders, kill them, and collect the XP.