Minecraft Mob Vote 2021: When is Minecraft Live and how do I vote? 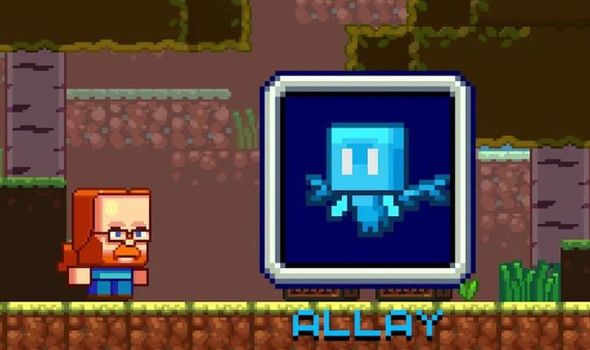 The Minecraft Mob Vote is getting underway this week, and three are three mobs to choose from in 2021.

The Copper Golem, Glare and Allay Mobs have all been announced ahead of Minecraft Live, the event of which they are all a part of.

Like in the past, developers Mojang celebrate the big event by making it possible for gamers to choose which new Mob is added to the game.

Each Mob comes with its own abilities and attributes, and they are all worth finding out about before you cast your vote on October 16.

The Copper Golem is made entirely of the metal it is named after and comes with another big quirk.

You will need to build the Copper Golem yourself, making it somewhat unique in the world of Minecraft.

The Copper Golem appears to be a limited time Mob, meaning it stops working over time as it oxidises.

Its main purpose will be to randomly press Copper Buttons, which will be added to the game if the Golem is selected by the 2021 Mob Vote.

A message from Mojang adds: “The copper golem is the DIY project of your dreams. Not only do you get to build a brand new buddy, but this little creature is made out of 100% copper. That means that just like any other copper structure, it will oxidize over time. It’s more than just a pretty face, the copper golem is also very unpredictable!

“Keep your eye on it, especially if you have any copper buttons lying around. Oh, you don’t have any of those yet? Well, it’s because they will also be added to Minecraft if you vote for the copper golem.”

Meanwhile, the Allay will be more useful, as you can give it an item and it will search around for more of them.

“It is also a huge music buff and loves to dance! That’s just delightful. But also practical, because if you have a note block nearby, that’s where it will drop your collectibles! And, as you can see, it is just adorable and has tiny little wings that I am totally not jealous of, not at all.”

The Glare is the third and final new Mob you can vote for and comes with some interesting new skills.

While it won’t press buttons or dance, it will seek out areas of the darkness where monsters can spawn, with Mojang confirming today:

“Besides being super relatable, it will also show you areas that are dark enough for monsters to spawn. It does so by flying to dangerously dark areas and then throwing a hissy fit. With the glare by your side, you’ll know that each tantrum will not only lead to me turning this car right back around, but also possibly monsters.”

WHEN IS MINECRAFT LIVE AND HOW DO I VOTE FOR MOBS?

Minecraft Live starts on October 16 at 5pm BST, making it very easy to watch in Europe and North America.

Mojang has confirmed that the main event will kick off at 12pm EDT and will include a lot of exciting information regarding Minecraft.

The development team has also confirmed that the 2021 Minecraft Mob Vote will begin during the broadcast on October 16.

To vote for your chosen Mob, you will need to head over to the official Minecraft Twitter page and cast your vote on the social media platform.

More information on how exactly the system will work will be revealed during the Minecraft Live broadcast, which will be available on YouTube.