In Monster Hunter Rise: Sunbreak's Dual Threat Event Quests, you'll have to hunt two powerful monsters in a single quest. For your efforts, you will be awarded with unique cosmetics items like Layered Armor, guild card titles, and more.

In the Event Quest 'Dual Threat: Go Out With a Bang!', you will have to hunt two Seething Bazelgeuses. If you struggle with hunting even one of these monsters, don't fret. Here we'll take a look at each of Seething Bazelgeus's strengths and weaknesses, the best equipment to use on this quest, and some tips for clearing it.

Dual Threat: Go Out With A Bang! Event Quest Guide 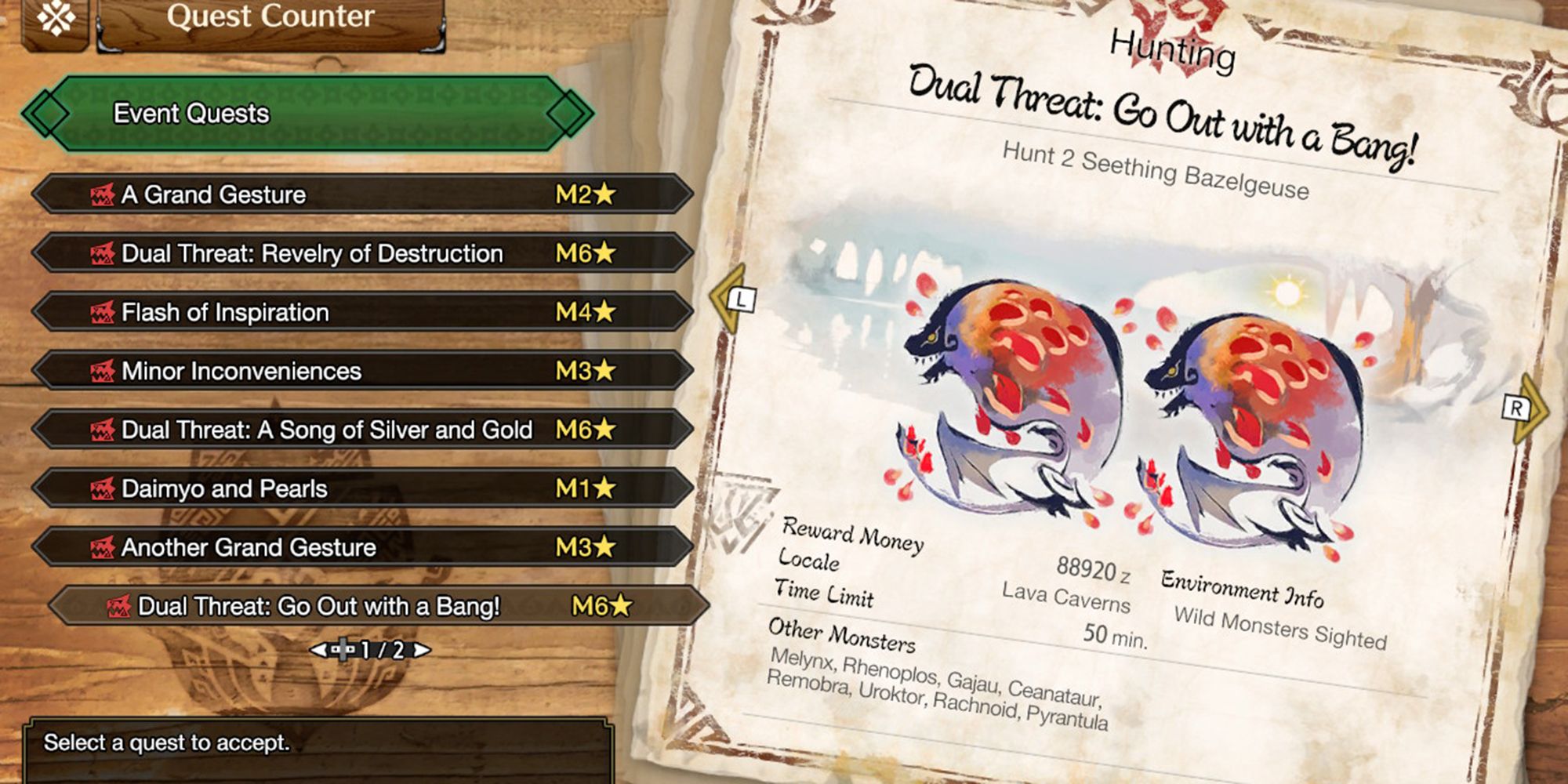 In this quest, you will have to hunt two Seething Bazelgeuses in the Lava Caverns.

Seething Bazelgeuse is weakest on its head and tail, where its explosive scales are stored. It is weakest to Ice damage, with Thunder coming in a close second.

Conversely, Seething Bazelgeuses is completely immune to Fire damage and Blast status effects, so avoid using these elements during this quest.

Best Equipment To Use

Because you will only be facing one type of monster in this quest, planning your equipment should be straightforward. Due to Seething Bazelgeuse's weakness to Ice and Thunder, weapons with either of these elemental damage types will do much more damage than weapons without them. Alternatively, utilizing a weapon with sleep can help, as Seething Bazelgeuse is more susceptible to sleep than other monsters.

Armor with high Fire resistance will protect you from this monster's high damage Blast and Fire attacks, while armor with overall high defense will reduce damage from all its other attacks.

When choosing your weapon, consider the Insect Glaive. Because of Seething Bazelgeuse's large wing hitbox, using aerial Insect Glaive attacks can deal massive damage. Additionally, the Insect Glaive, when boosted by all three Kinsect Extracts, has high hit counts on its attacks, making it great for applying Elemental and Ailment status effects, like Iceblight or Sleep.

Seething Bazelgeuse has a number of bombing attacks that it will use to cover the ground with exploding scale bombs. When enraged, these scale bombs will glow purple before exploding; watch their position and color as they near explosion.

Attack Seething Bazelgeuse's glowing head and tail to knock it out of its enraged state.

Dive evading can be used to avoid a number of Seething Bazelgeuse's flying attacks, as the long invulnerability granted from the dive will match the long animations of the monster's attacks. To perform a dive evade, dash directly away from the monster before pressing the dodge button. This will have you dive toward the ground, making you invulnerable from the second you dive until you stand back up. 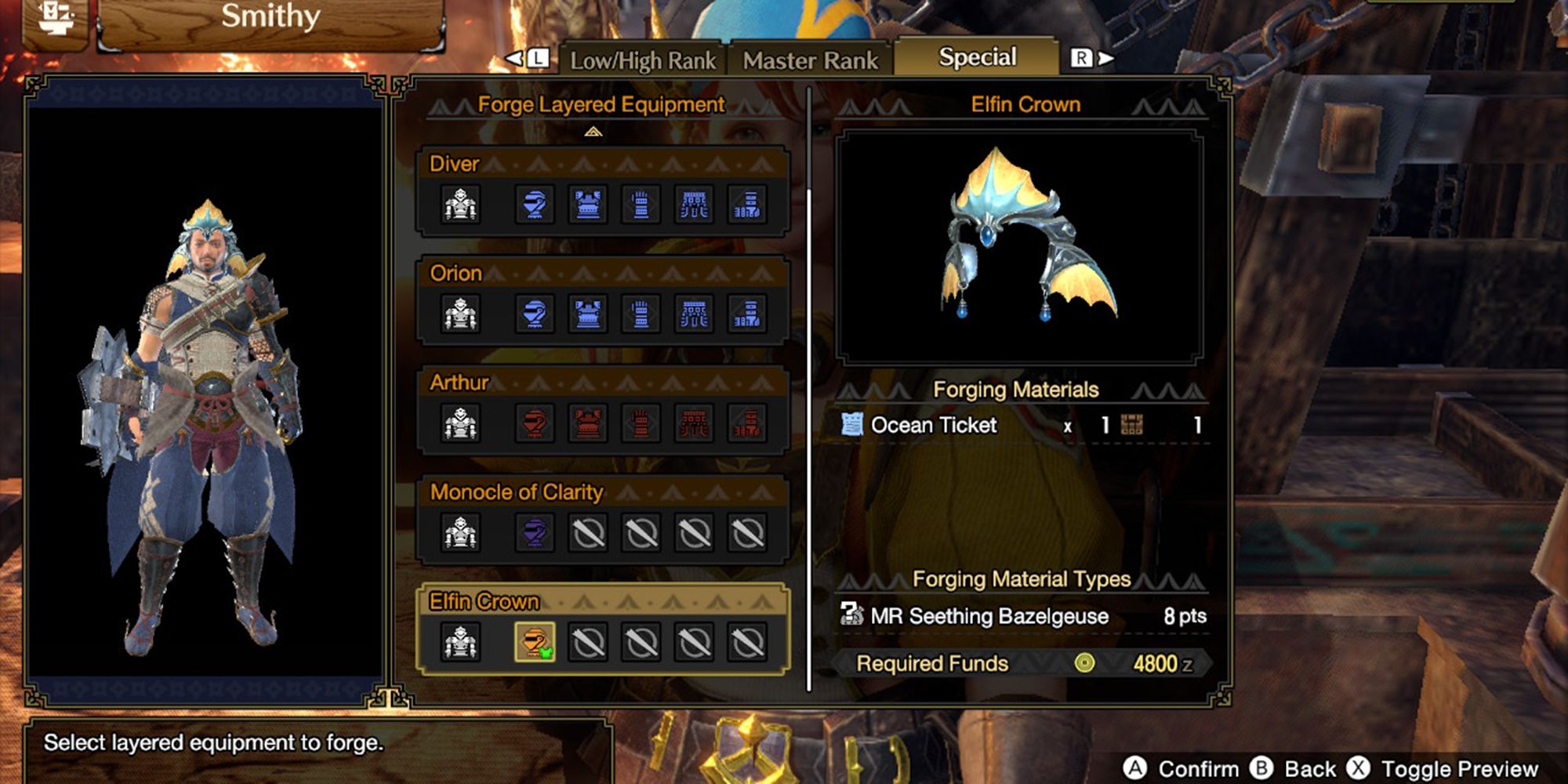 For completing this Event Quest, you will obtain an Ocean Ticket and the crafting specifications for the Elfin Crown Layered Armor. This helmet can be crafted using the following materials.