In Necromunda: Hired Gun there’s a lot of customization available for your particular Bounty Hunter. This grimdark Looter Shooter includes plenty of weapons and skills, allowing you to mow through targets with your favorite flavor of carnage.

When first starting out in this challenging 40k themed videogame, it can seem a little daunting to figure out what particular playstyle suits you best, so experimenting is always worth it. Although you could pour all your credits into stat points or go for a maxed-out weapon, it can make things a little stale and repetitive after a while. So why not give yourself an extra challenge or freshen up your hunts by speccing your character to one of these interesting builds. Although the enemies in Necromunda: Hired Gun do have a few issues, one thing they’re very good at is putting out high amounts of damage. But there is a build that can turn you from a squishy Bounty Hunter into an unstoppable Space Marine.

Dropping credits into the Internal Implants of The Strength and Bio-Booster as well as the Auto sanguine allows for faster passive healing and higher damage absorption. Hitting the cap on the health improvements in the Arms Bionics as well as the Refractor Field is also a must for this build as it makes you incredibly tanky. Then combine this with a high-end Bolter or Heavy Bolter and you’ve basically made your own damage-soaking Astartes. 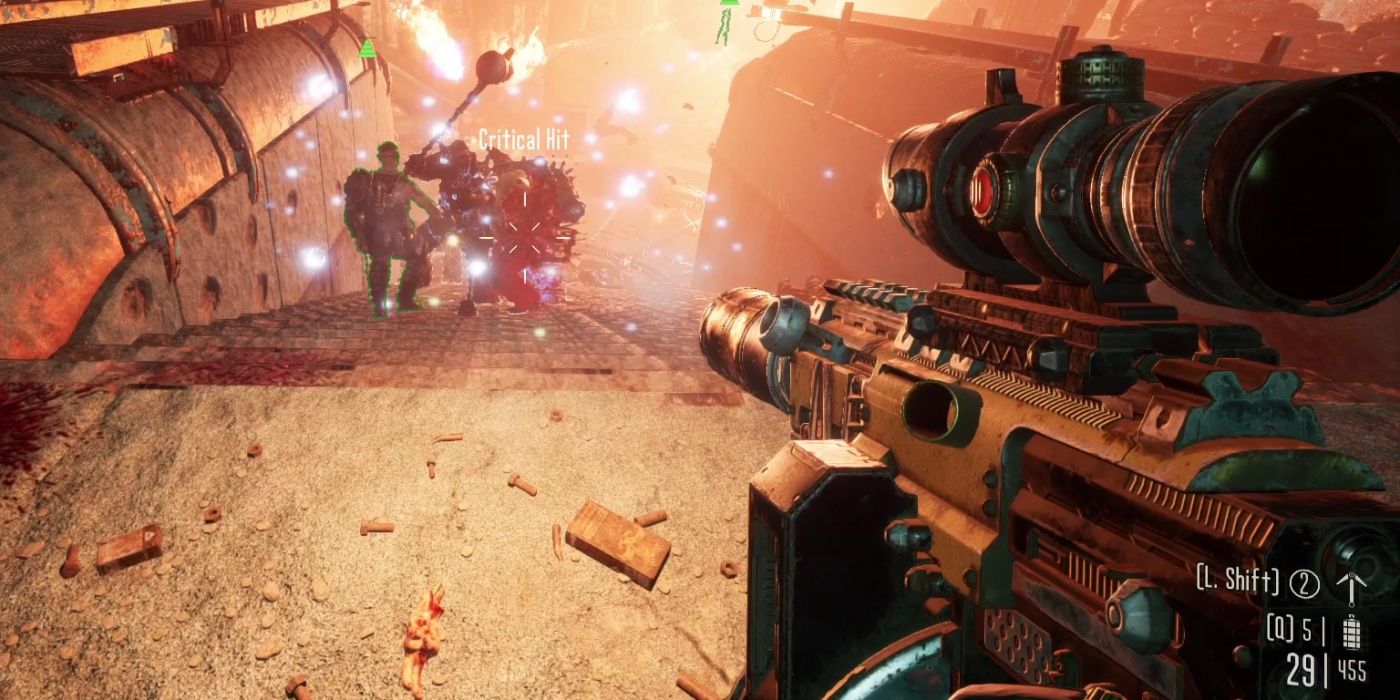 If you’re looking for a build that causes a lot of DPS, then load up with an AutoPistol. This small one-handed shooter may look puny, but it can put out a lot of punishment with the right skills attached to it.

Loading up with a capped Perfect Aim stat ensures every shot lands where it’s aimed. Also focusing on increasing the weapons ammo amount by attaching a larger magazine and attachments that improve stability ensures that every shot lands exactly where you want it. To really maximize its damage potential you should use Critical Hit trinkets as well as increase the base Cerebral Implant skill to its max as each level also increases your Crit Chance. When it comes to shotguns in Necromunda, there are a couple to choose from, but for this build, you’re going to want to use the Auto-shotgun. With its high rate of fire and large-capacity magazines, just hold the trigger down and watch your problems disappear in a puff of pink pellet-filled mist.

The skill tree recommendations for this build are similar to the Space Marine one, but you’re also going to want to max out your Leg skills for move movement as well as making a few adjustments to your shotgun first. Attach a Precision Muzzle and short barrel to tighten up the spread of your pellets into one big hit. Also, slap on some crit trinkets so each pellet has a chance to do an insane amount of damage. 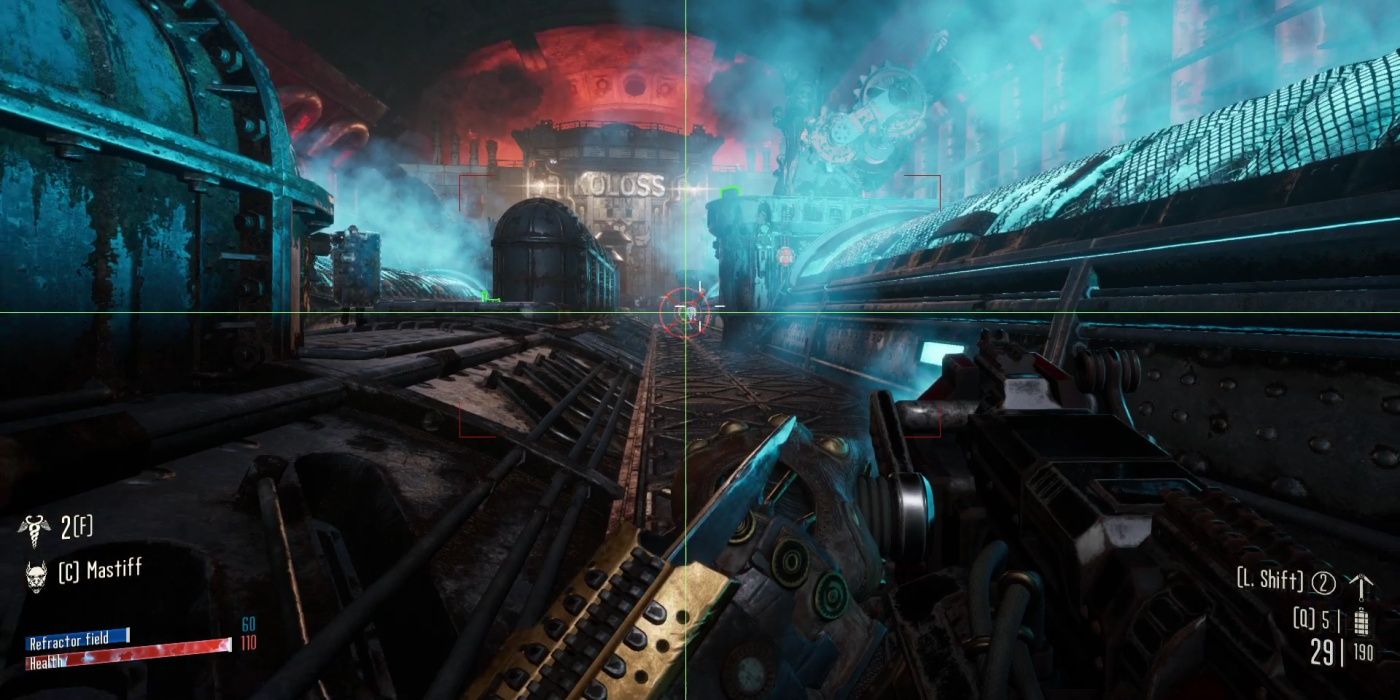 Sometimes you just want to get a little lazy in your shooting and the Perfect Aim ability allows you to do just that. This handy skill can be upgraded to last longer and hit more targets and it does the aiming for you.

Putting points into Heightened Senses alongside Perfect Aim as well as the Augur Array will allow for faster reactions with bullet time as well as a scanner that shows where enemy’s or loot chests are through walls. Combining this with a high DPS gun such as the Heavy Bolter or AutoPistol and you can just walk around holding down the fire button as the auto tracker does all the aiming for you and the scanners tell you where everything is. So if you want to make a particularly tough section a little easier or go for some mindless murder then try out this build for yourself. 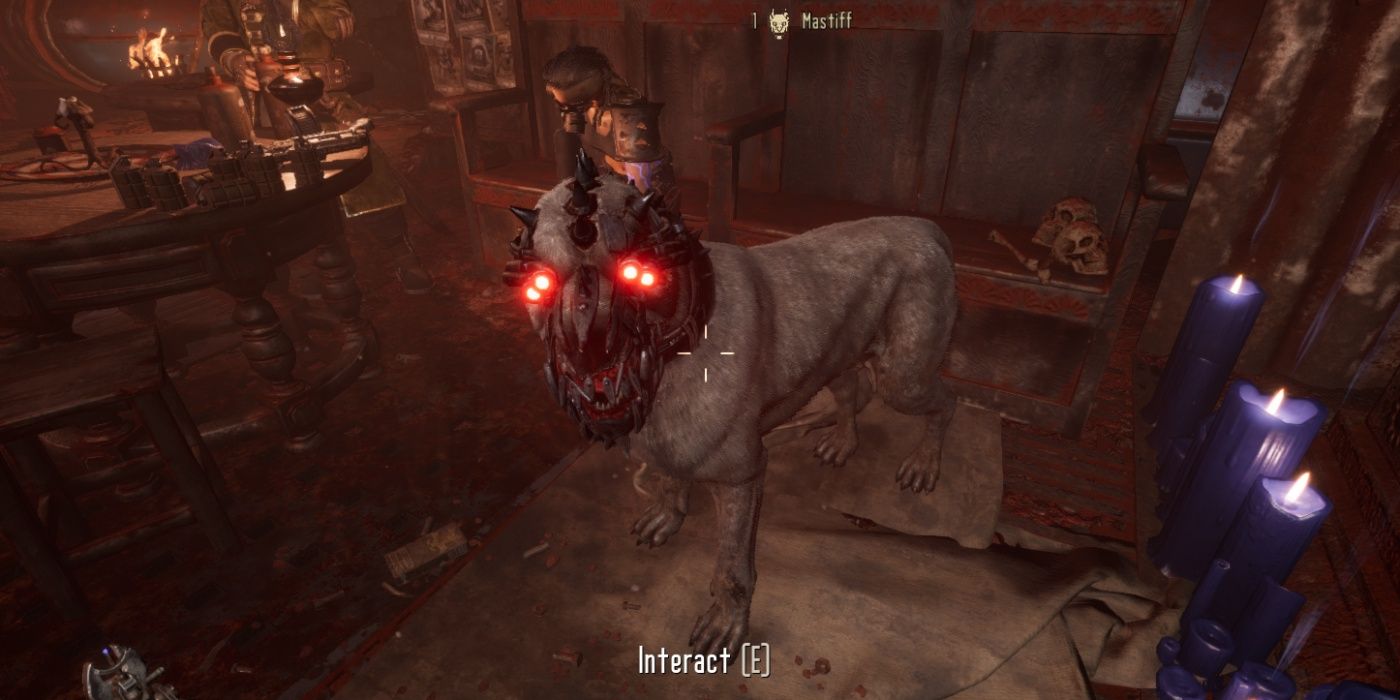 The Mastiff in Necromunda: Hired Gun is a bit of a mixed bag, at times. It might just stand there as the pathing bugs out or it can be a fast-moving fuzzy missile with cybernetic teeth.

For those looking to make their Mastiff into a marauder mangler then they should max out the bionics for its head, body, and paws. Each level makes Mastiff look more mechanical and much more dangerous. Then you can happily spam away at the dog button as your four-legged friend tracks down your targets before tearing them limb from limb in his cybernetic jaws. 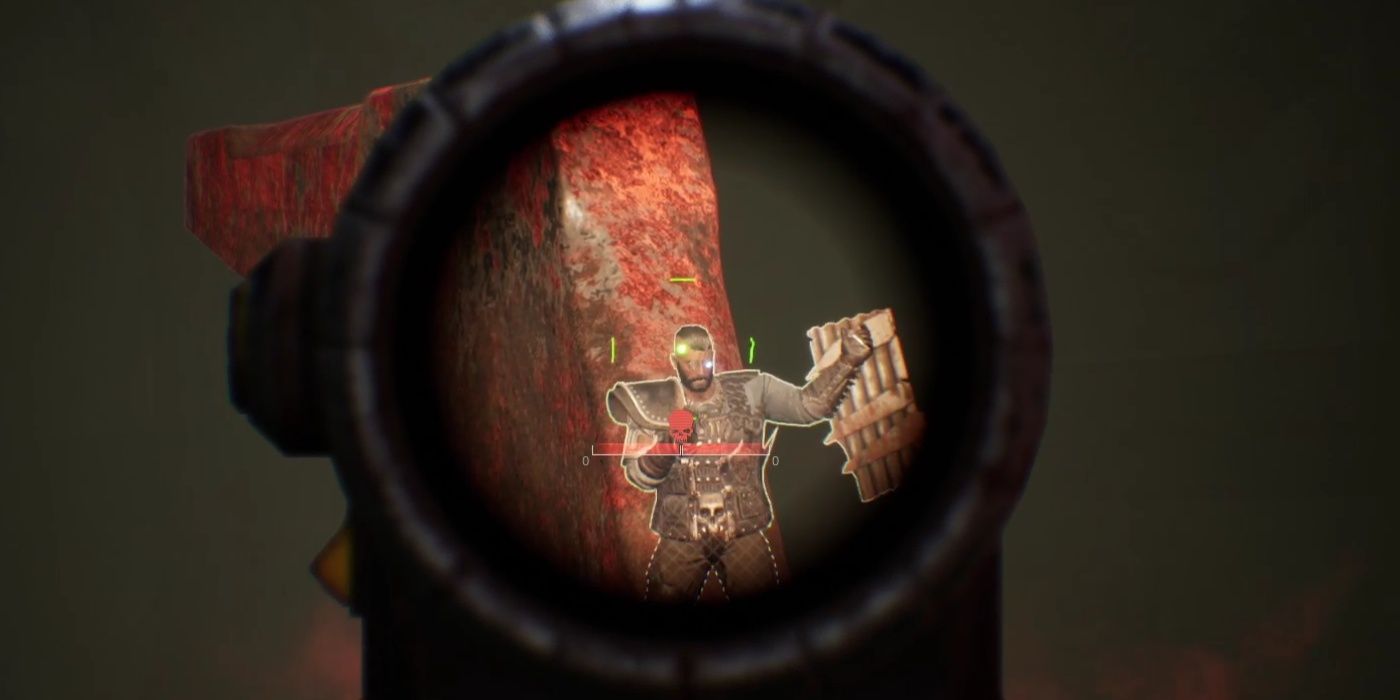 A sniper build in Necromunda: Hired Gun can be incredibly fun as the laser sniper at full charge can one-shot most enemies. Plus the architecture of the level design (unlike its fantasy counterparts) is covered in industrial platforms and gigantic pipes sweeping around the rooms that provide perfect sniper nests.

Equipping a rifle with trinkets that specialize in crits as well as Archeotech that ups energy damage and a high-end Energy Modulator means you can take on much bigger targets. Using the Augur Array with this also lets you see instantly where your next shot should be aimed, so you can grapple around disintegrating targets with glee. 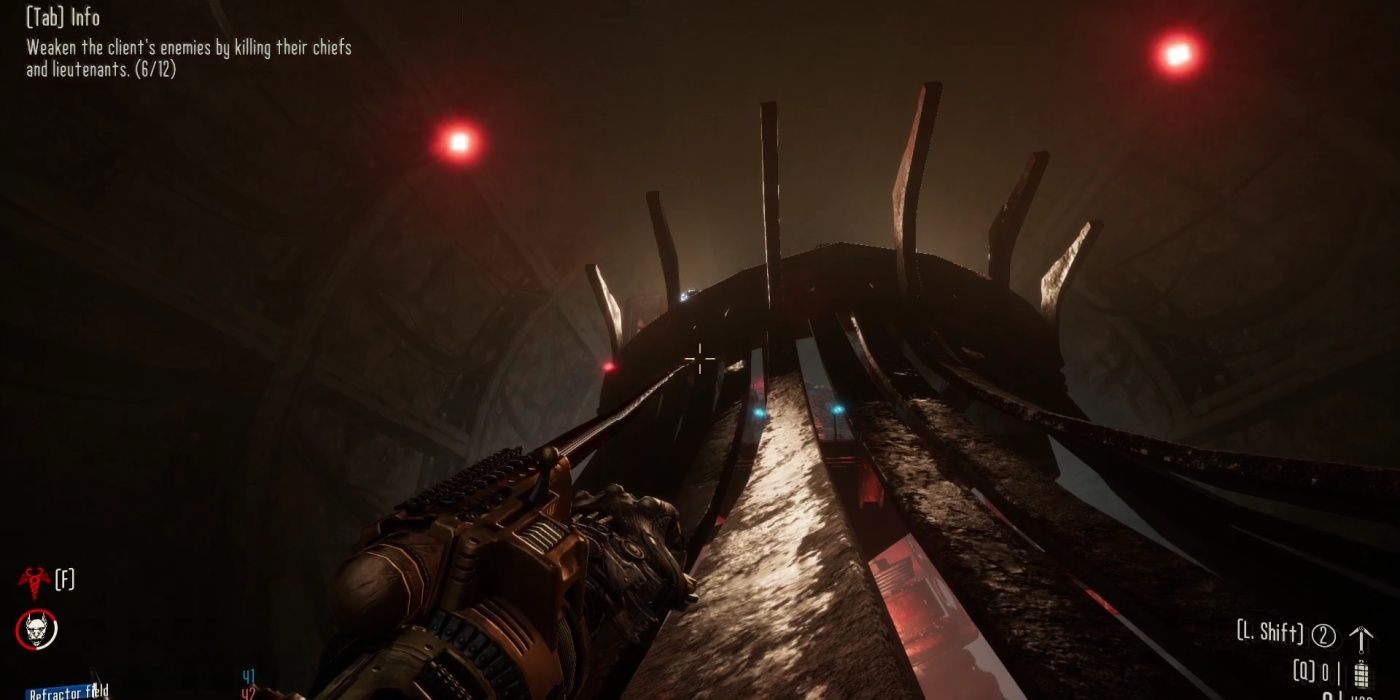 Even though it may at first seem like a normal first-person shooter, Necromunda: Hired Gun is all about staying on the move and getting from point A to B in the most creative way you can.

Maxing out the skill trees of the Maglev Coils, Repulsion Control, Attraction Control, and the base skill level of the legs themselves will allow for more verticality and momentum as you move around the sprawling levels of the Underhive. So with this build, you can become a swift parkour ninja in no time. Credits get you everything in Necromunda: Hired Gun. From equipment to weapons, guns, and abilities, nothing comes for free. So coming up with a build that specializes in making money is always worth consideration.

This can be achieved relatively easily by using weapons that include increased credit drop rates as well as keeping Ratskin Maps and treasure maps handy in your inventory as these alter the drop rates on missions, meaning you can get more high-end gear and larger credit piles from targets.  Plus with a maxed-out Ferric Lure skill that attracts loot at greater distances and an Augur Array telling you where all the chests are, you can suck up that cash fast. The bionics are just a small part of your arsenal, but the right build can make them incredibly powerful to the point you may not even need to use guns. The Luminen implant allows for a number of interesting psychic abilities.

For example, you can discharge energy, cause damaging blasts with your hands, detonate targets or ignite them with your mind. Maxing these out reduces their energy requirements and increases their cooldown rate. So combine these with maxed-out leg bionics and you can leap around the map fast as you fire off your powerful Psyker abilities. There are a lot of weapons that have that typical Warhammer weirdness that everyone loves, and the most powerful and fun to play around with are the energy weapons. Your options are the Plasma Pistol, Plasma Rifle, and the Grav Gun, and with this build, you can dissolve all in your path.

Equip a Plasma Pistol in your handheld slot, a Plasma Rifle in the Basic Slot, and a Grav Gun in your Special. Equip each one with Archeotech that specializes in energy and splash damage as well as attachments that boost their DPS and enjoy your new raygun build just keep your distance to avoid the splash damage.