Neon White feels like an old game. The design isn’t archaic, it’s not old-fashioned (quite the contrary, actually), and there’s no outdated language that makes you wince. But playing it feels like you’re a kid again, and you’ve borrowed a bootleg 50-in-1 disc from a kid at school. You try out a few games, there’s a skateboarding one and a Pokemon knock-off, but Neon White is the one you obsess over. You pass the controller between your friends every time you die, each trying to find shortcuts and shave milliseconds off each others’ times. It’s a blissful experience. Neon White makes you happy.

I’m obsessed with it. I have been since I played the demo, which I described as Titanfall meets Hades. After playing the full game, I stand by that assessment, but want to specify a bit more. The levels are like Titanfall 2 levels if you’re speedrunning them. There’s less shooting and more puzzle solving, as you work out the perfect route that will shave a second off your time. There’s similar grenade tech, too, where you use explosives to propel yourself across levels and record unbelievable times. If you know how to wallbounce in Apex Legends, that will help your time, too.

I’ll get back to basics for a second. You’re dead, but instead of being condemned to Hell, God’s angels task you and a handful of other sinners with ridding Heaven’s outskirts of invasive demons. The Neon – that’s what all us heathen sinners are known as – who does best wins a year in Heaven. The thing is, all the other Neons seem to know you, but you can’t remember a thing about your life. Leveling up your friendship with each character by showering them with gifts picked up in levels helps you to get to know them better, and remember more about yourself. It’s a system ripped straight out of Hades, and the character designs also embody another aspect of Supergiant’s hit roguelike: everyone is incredibly hot. 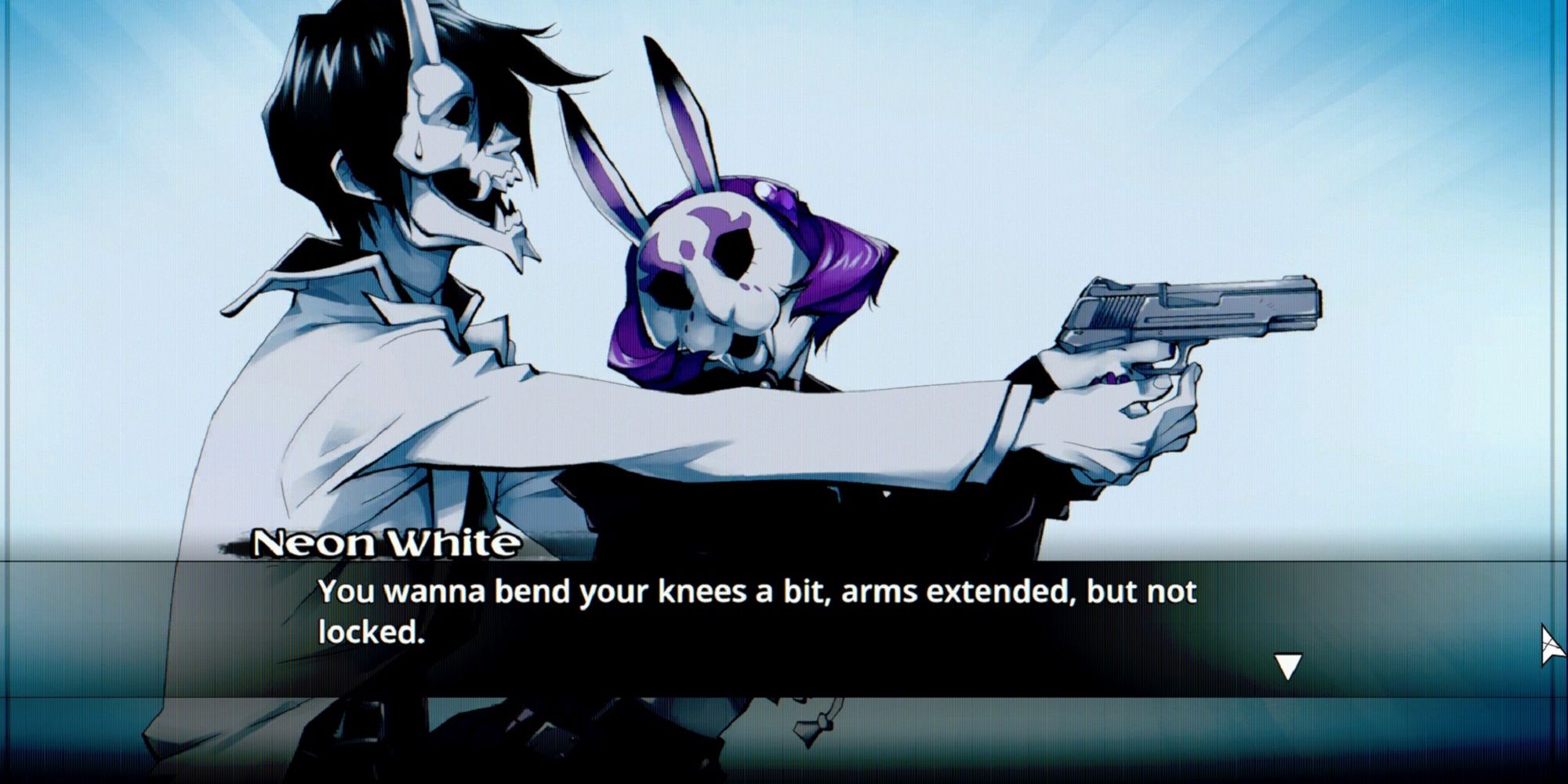 The friendship-slash-relationship building comes secondary for me, but other people may like that element of the game more. It’s not quite as in-depth as the similar system in Hades, and to be honest I care less about some of the characters. Maybe leveling them up would change that, but I showered the majority of my gifts on Neon Red and left slim pickings for everyone else.

The main reason the friendship comes second, though, is because the actual levels are so good. Neon White is a great game to blitz through and every mission is really fun when you engage with it on a surface level, but surprisingly enough, it’s far better to take your time with this lightning fast speedrunning sim. Each level plays great the first time around, but it’s when you’re actively trying to shave off the last half a second that the genius design really becomes apparent.

Firstly, getting a certain time on each level will reward you with a hint that is practically mandatory to achieve a Platinum-level speedrun – and more, importantly, beat your friends. But more than that, you’ll notice that scaling the outside of a building with a perfectly timed grenade blast is marginally quicker than climbing the stairs (I can’t wait to see what actual speedrunners do with the game). You can’t complete a level without killing every demon, so some sections are mandatory, but soon enough you develop clever techniques for sniping far-off demons that allow you to skip their sections, or otherwise utilise your abilities to craft the perfect run. 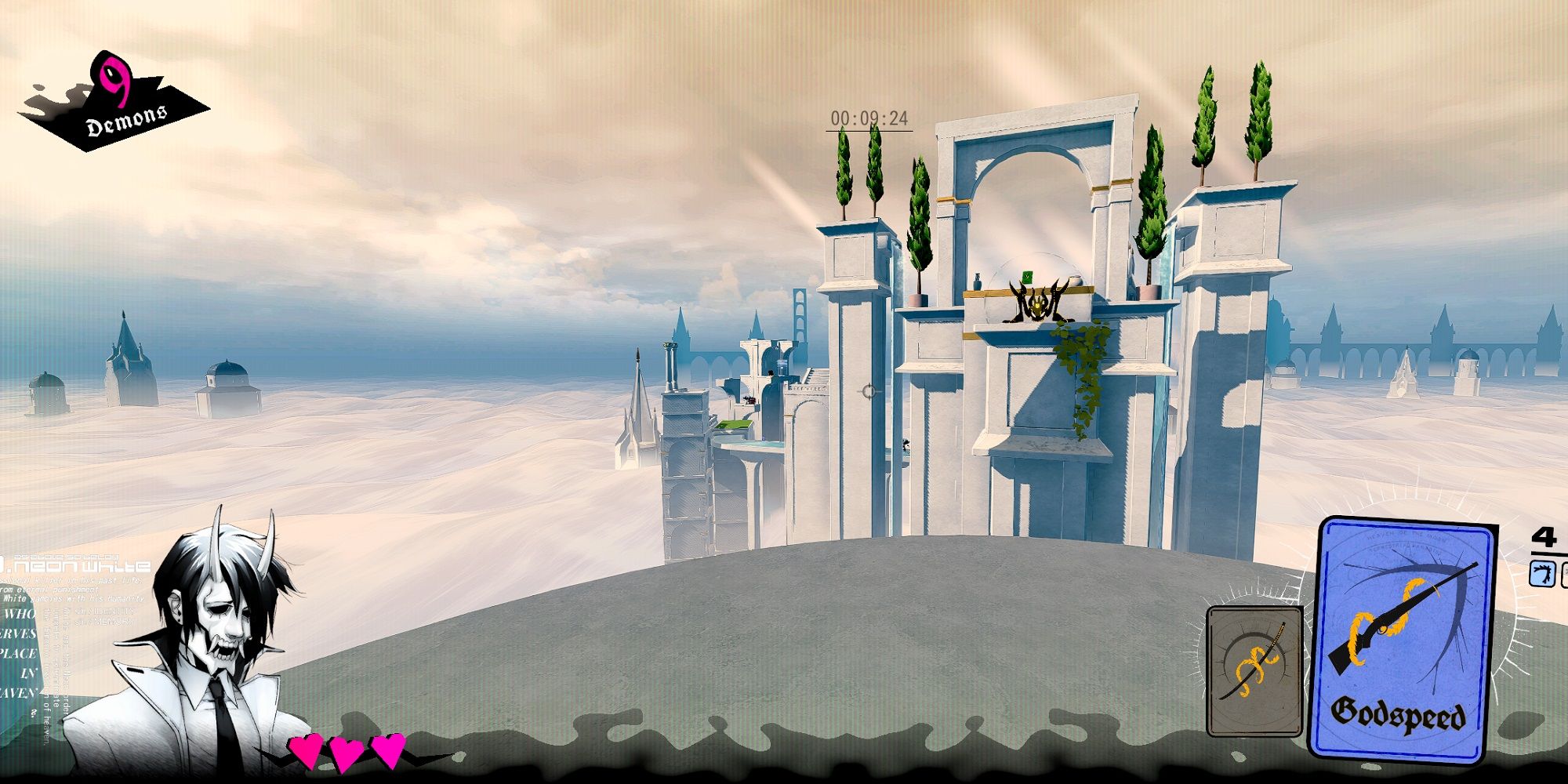 Abilities are a big part of Neon White. They’re collected in the form of weapon cards. Each weapon – usually some manner of gun – can shoot its limited ammo supply to take out demons, but most often you’ll need to discard it instead, which grants you a one-off ability. Some weapons are grenade launchers, others offer you a double jump, but all are necessary to get the best time. If I wasn’t racing to review this game, I would have spent an hour on every level (like I did in the demo), and I likely will once I’ve finished writing. I’ve already topped a couple of leaderboards, but I can’t wait to be toppled once more people start playing. That’s all a part of the challenge.

The real fun of Neon White is in that competition. Competition with yourself, with friends, with strangers, everyone wants to go that little bit faster every time they replay a level. It’s why you obsess over niche mechanics like wall bounces or double grenade propulsions, and it’s why you want to play again and again. This wouldn’t be possible without incredibly robust level design; this game is meant to be messed with. Despite attacking every level from what seems like every possible angle, I didn’t encounter any glitches or sections that felt unfair. Everything is intentional, and everything is incredible. And just when you think it’s peaked, you play the Clock Tower level. I won’t spoil even a single possibility, but Neon White is worth playing for that mission alone.

I want to take a brief moment to mention Neon White’s biggest downside. I got quite severe motion sickness when I played this game. For some reason, this was exacerbated on controller, but somewhat alleviated using mouse and keyboard, so that might be an option if you suffer badly from this sort of thing. Fiddling with the FoV settings helped me get rid of the last of the nausea. The only other times I’ve experienced this are when I played Modern Warfare 2 (the original one) multiplayer projected onto a wall as a kid and when playing a zero-gravity simulator in VR, but I got it bad with Neon White. It was remediable for me, but if you suffer badly from motion sickness, then watch out. 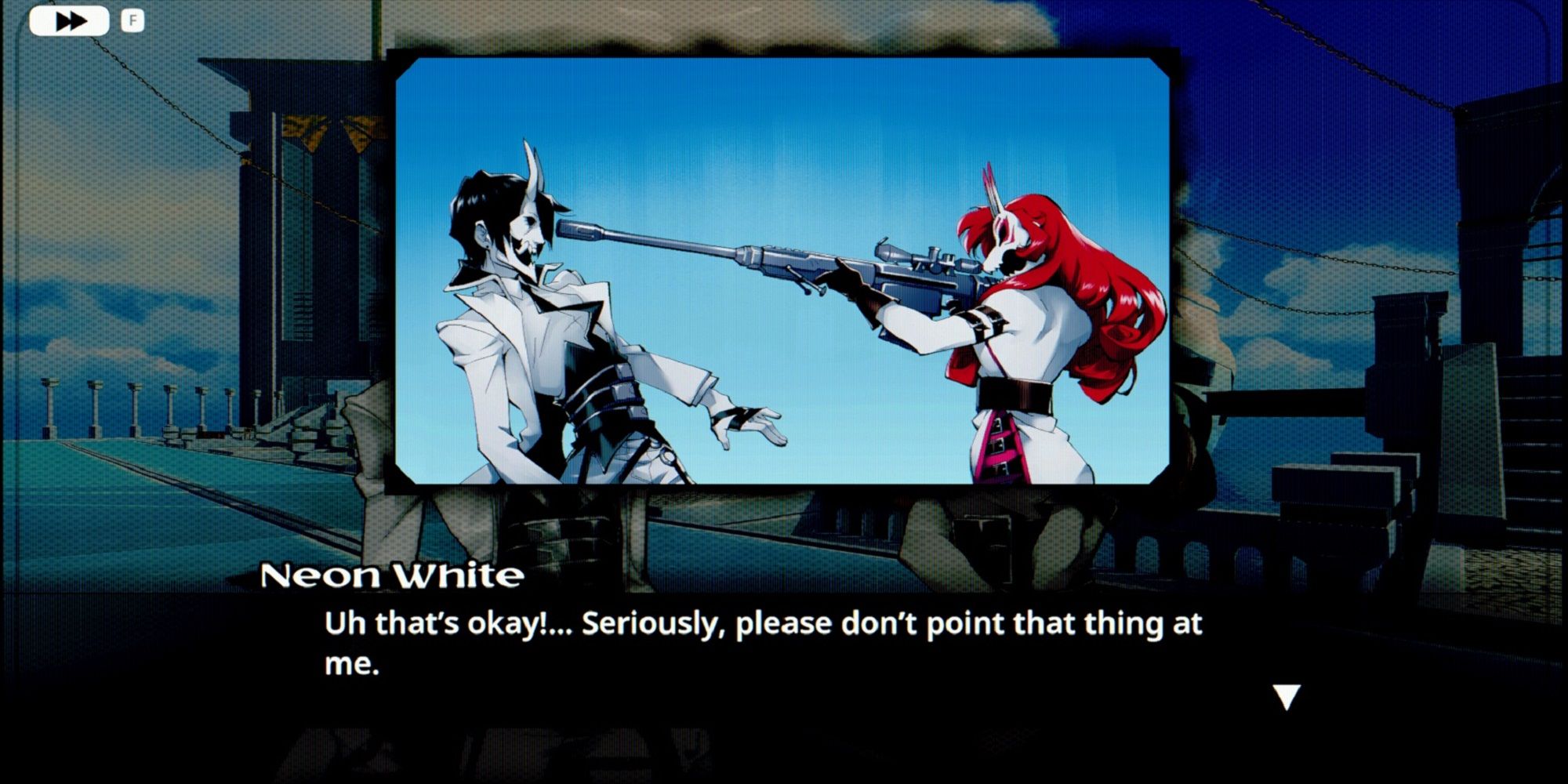 Once my issues were sorted with a switch of input and fiddle with settings, I was back in the hot seat, and there’s very little that will tear me away from this game for a long time. If Neon White had none of the style, none of the characters, and none of the story, it would still be a brilliant game. But, as it happens, it’s dripping in style, the characters are interesting and sexy, and the story is compelling enough, even if it’s not the real draw.

Neon White, behind the sexy suitors and anime villains, underneath the storyline and relationship building, is a game about speedrunning. It’s about learning and replaying, and it’s about beating your friends. It’s a modern iteration of a classic, simple premise, but without perfect execution, a simple premise can easily flop. Thankfully, Neon White delivers nearly flawlessly. Just make sure to take your time with this whirlwind ride, you’ll thank me for it.

A review code was provided by the publisher for the purposes of this review.