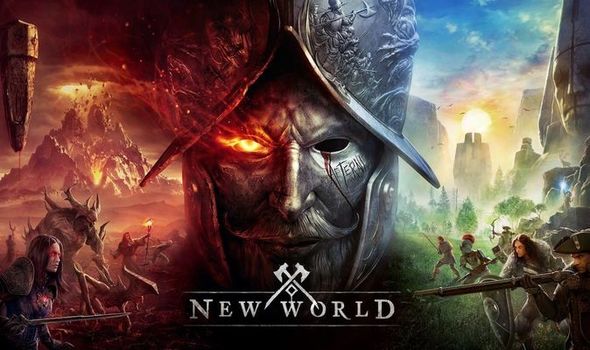 Popular Amazon MMO New World has been given yet another major update.

Sadly, however, fans will be forced to sit through around three hours of server maintenance before being able to play it.

The New World server maintenance is scheduled to run from 2pm GMT until 5pm later today.

The only good news is that the new update makes lots of changes to the core game experience.

Certainly one of the best improvements concerns coin sellers, as Amazon looks to ban these annoying players.

Update 1.05 adds restrictions to prevent player-to-player trading from characters under a certain level.

The company has also redistributed coin value from some of the earlier quests to later in the Main Story questline.

Check out the New World update 1.05 patch notes below…

• We know many of you have seen the pesky chat messages from players spamming messages. To combat this, see below.

– Banned and suspended many of the reported accounts. Thank you for your reports for players spamming chat.

– Added restrictions to prevent player-to-player trading and currency transfer from characters under level 10, or whose account is less than 72 hours old.

– Logging in after your account is 72 hours old will enable your ability to trade and transfer currency once you’ve hit level 10.

– Redistributed coin value from some early quests to later in the Main Story questline, keeping the total amounts of coin earned the same, just delivered in quests slightly later.

– Trading Post usage will be restricted until new characters accept the “Introduction to Trading Post” quest in their first settlement.

– We will monitor the impact this has on bots and the health of the game, and continue to adjust as necessary.

• Fixed a bug where players were able to duplicate items via storage sheds and crafting stations.

• We fixed the issue of gold duplicating on territory projects we introduced by disabling trading and made sure it would not occur in the future should we need to disable trading again.

– Removed the small area of effects (AoE) that were triggering on passthrough from every hit of the base version of Orb of protection.

– AoE no longer triggers on passthrough from the Aegis upgrade, it will only trigger on impact against an enemy/object now.

• To encourage competition in Outpost Rush, we’ve slightly reduced the Coin and Azoth rewards for the losing team.

• We have surfaced the War conflict progress bars on the map and the Faction Board when there is an upcoming Invasion, as you can still gain War conflict for your Faction.

• Identical Weapon Equipping: Players can no longer equip the same weapon type in both weapon slots.

• Group Scaling Passives: Fixed issues which could cause passive effects that scaled on the number of nearby foes

• Resilient (Item Perk): Fixed an issue that caused this perk to reduce all damage instead of just damage from critical hits.

• PvP Flagging: Fixed an issue that allowed PVP and PVE players to heal each other.

• Fixed an issue that was allowing players to get out of the starting Fort before the match starts.

• We now prevent multiple players from interacting with the Altar in Outpost Rush. This will prevent players from getting multiple summon tokens per 500 azoth.

• Fixed an issue that sometimes caused the nameplates of summoned allies to appear hostile.

• Fixed an issue that was causing Battle Bread (the food buff in Outpost Rush) to be twice as effective as intended.

• Updated the tool tip for Battle Bread and Monster Slayer’s Stew to properly describe the buffs they provide.

• Fixed an issue that could cause players to become stuck in a teleport loop if they teleported out of Outpost Rush while using /unstuck.

• Fixed an issue that prevented some people from joining Outpost Rush because they had a pending group invite.

• Repair kits should no longer require Coin to use.

• Fixed an issue that sometimes caused players to use the wrong consumable when using consumables from the inventory screen.

• Fixed various issues with Invasion status showing before the Invasion was declared.

• Fixed an issue allowing magic weapons to animation cancel their primary attacks with weapon swap or targeting spells, causing rate of fire to be faster than intended.

• Fixed an issue that caused Ice Gauntlet upgrade Pylon Dodge to only work immediately after you placed the Ice Pylon.

• Fixed an issue with enemy AI duplicating and stacking spawns during the quest “Shivering Timbers”.

• Fixed an issue that allowed players to initiate a server transfer if they were in the tutorial.

• Fixed an issue causing the Trading Post to become unresponsive or delayed.

• Improved server performance when a large number of players congregate in settlements.

• Fixed the UI notification for landing in a hot spot while fishing.

• Fixed a localization issue where bonus crafting percentages for tools were displaying as 0% for non-English languages.

• Fixed the time in Europe to properly account for the change from CEST to CET.

• Fixed an issue preventing gear score to increase past 589 from drop rewards.