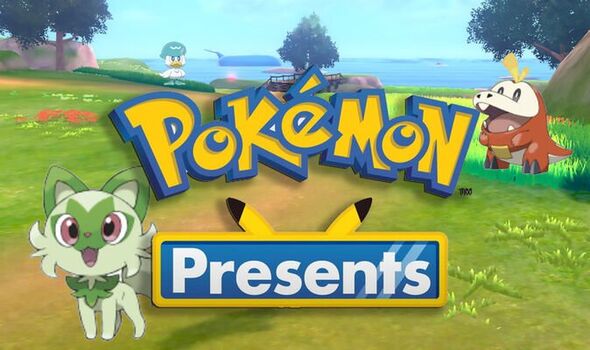 The Pokemon Company is planning a big Nintendo Direct-style event to kick off August. Taking place at 2pm BST on August 3, the Pokemon Presents event will feature updates on all things Pokemon, including various video games and apps. Headlining the event is new gameplay for Pokemon Scarlet and Violet, which are the next mainline entries in the popular series. Needless to say, the event will be broadcast live on media apps like YouTube, which you can read about below.

The news was announced by The Pokemon Company on Twitter and retweeted by Nintendo, alongside a preview of what fans can expect.

“Attention, Trainers! Tune in to our YouTube channel on Wednesday, August 3 2022 at 2pm BST for a Pokemon Presents video presentation with updates on Pokemon apps and video games, including Pokemon Scarlet and Violet!”

If you want to watch the Pokemon Presents event live, simply hit play on the video embed below at 2pm BST on August 3.

Express Online will also keep this article updated with all the latest developments from the Pokemon Presents Nintendo Direct for August.

While multiple games and apps will be shown during the event, fans will be most interested in Pokemon Scarlet and Violet.

Launching this November, Pokemon Scarlet and Violet represent the ninth generation of Pokemon games. The headline feature is the introduction of an expansive open world.

“Pokemon Scarlet and Pokemon Violet, the newest chapters in the Pokemon series are coming to Nintendo Switch on November 18,” reads the official description. “With these new titles, the Pokemon series takes a new evolutionary step, allowing you to explore freely in a richly expressed open world.

“Various towns blend seamlessly into the wilderness with no borders. See the Pokemon of this region in the skies, in the seas, in the forests, on the streets – all over!

“Experience the true joy of the Pokémon series – battling against wild Pokemon in order to catch them – now in an open world game that players of any age can enjoy.”

Fans will get a closer look at the open-world Pokemon game during the event, alongside more details about new Pokemon making their debut.