Adalo (formerly Foundry), a no-code environment for building cross-platform mobile and web apps, today announced that it closed an $8 million series A round with participation from Oceans Ventures and OldSlip Group. The company plans to put the round toward product development and hiring, according to cofounder and CEO David Adkin, as well as supporting its go-to-market efforts.

According to one estimate, only 0.3% of the general population has the skillset to create apps. This means that the majority of people — including small business owners and nonprofits — have had to outsource app development, which is costly and time-consuming. An estimated 19% to 23% of software development projects fail, with that statistic holding steady for the past couple of decades. Standish Group found that “challenged” projects account for about 52% of all software projects.

Adalo, which is named after the mathematician Ada Lovelace, provides design tools that customers can use to design apps in a drag-and-drop fashion. Users can select from preconfigured modules or make their own, leveraging database configurations and APIs to integrate with existing systems. Adalo can add records to databases as well as help update and keep track of user data. And the platform can create native versions of apps for both iOS and Android. 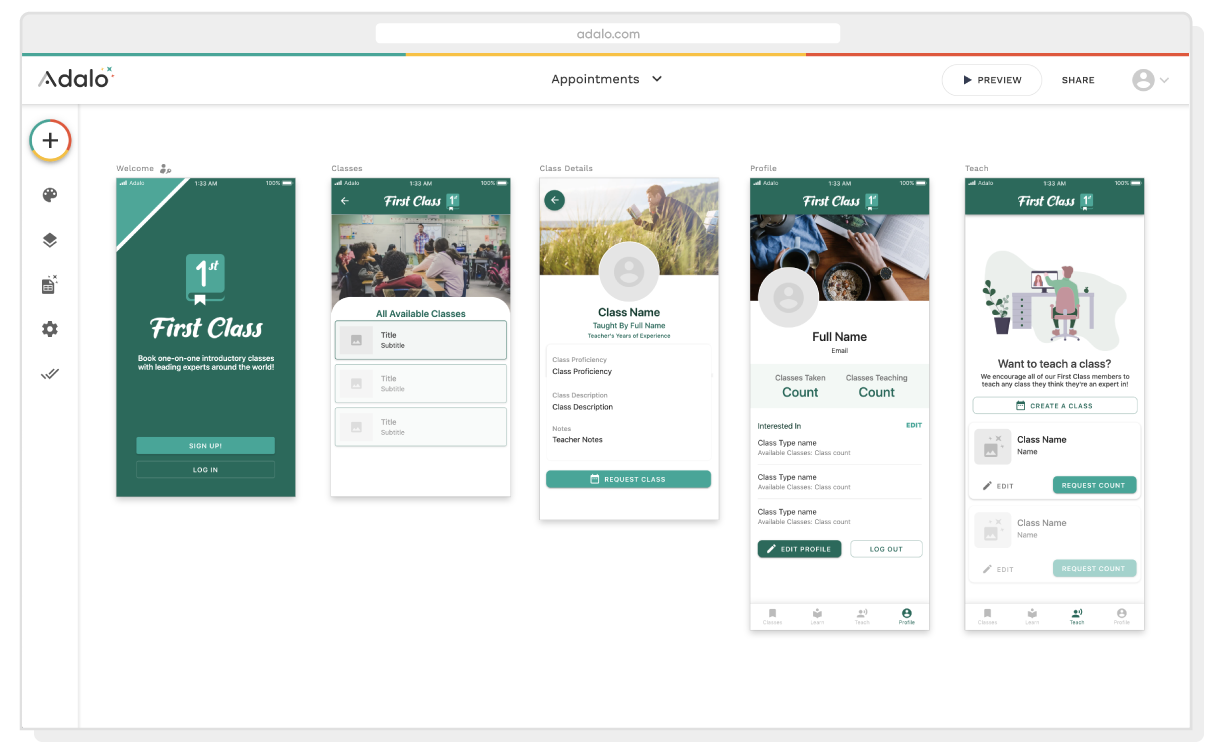 “About 5 years ago, founders Ben Haefele and I … were noticing just how quickly design tools were progressing and figured there had to be a way to create apps without coding. We decided to attack the problem from a different angle than everyone else asking the question: what if instead of trying to make a programming language visual, we made design tools functional?” Adkin told VentureBeat via email. “Adalo was founded in 2018 and officially launched in November 2019. Before launching publicly, we built and sold apps to both new startups and existing businesses using our platform. After seeing just how valuable the custom software that we were creating for those organizations, we realized just how powerful and big this could be and decided to go down the venture funding path.”

“Since Adalo is platform agnostic, we’re a great platform for organizations that have outward facing customers who interact with the business,” Adkin said. “Adalo works across all types of departments, so instead of asking for development resources from an already strapped department, the department with the problem is able to solve it themselves. We’ve seen tools like customer relationship management platforms, scheduling tools, internal wikis, inventory, organizational software, and more developed with Adalo … Overall, Adalo allows businesses to better connect and communicate with their customers, clients, and community.”

There’s plenty of competition in the low- and no-code app development platform market, which is anticipated to be worth $86.92 billion by 2027, according to Grand View Research. But Adalo says it’s seen “significant” growth in the three years since launch, with over 223,000 developers registered to date and more than 25.3 million monthly active users. In May 2020, Spotto, an app developed using Adalo that helps graduates match with employers during the recruiting process, was acquired by the Japanese recruiting firm A-Career.

“This latest funding round will allow Adalo to expand on its core strengths. We will be looking to take our web apps to the next level by letting makers build responsive apps that look good across different screen sizes. Additionally, we’ll be building off of the success of our marketplace by enhancing it to include templates, actions, and integrations as well as a way for makers to monetize their creations,” Adkin added. “With an additional focus on education, Adalo also plans to create an academy to help its users throughout the entire app development process; from strategy to design and everything in-between. Finally, we’ll be expanding our Adalo Experts program to connect more freelancers and agencies with existing businesses.”