The camera whirs into focus. Distorts. Whirs into focus again. Scanlines and static make the scene hard to process at first, but they slowly fade. There’s an astronaut here—Emma Fisher, one of your crew. She sounds worried. “That wasn’t good. SAM, run your self diagnostic procedure. What errors are you showing?”

You check, one memory module at a time. The first one, mostly red, displays 95% degradation. The second, 93%. The remaining two, similar. “The main memory core has been corrupted,” you say. “I have lost significant station data.” Your voice is calm. The implications are not. There’s been some sort of accident onboard the Low Orbit Space Station, maybe an explosion, and nobody knows why. Not even you, the ship’s artificial intelligence.

There’s even a chance it was your fault.

Stories Untold was one of my favorite games of 2017, a love-letter to analog technology that managed to wring horror from the mundane—fiddling with the knobs on hospital equipment to analyze some otherworldly experiment, or panning through microfiche while one-by-one neighboring radio towers went silent. It was messy and it was weird and most of all unique, in an industry where that seems all-too-rare. The ending was a letdown, but it remains a personal favorite of mine and I’ve been eagerly awaiting No Code’s next project. 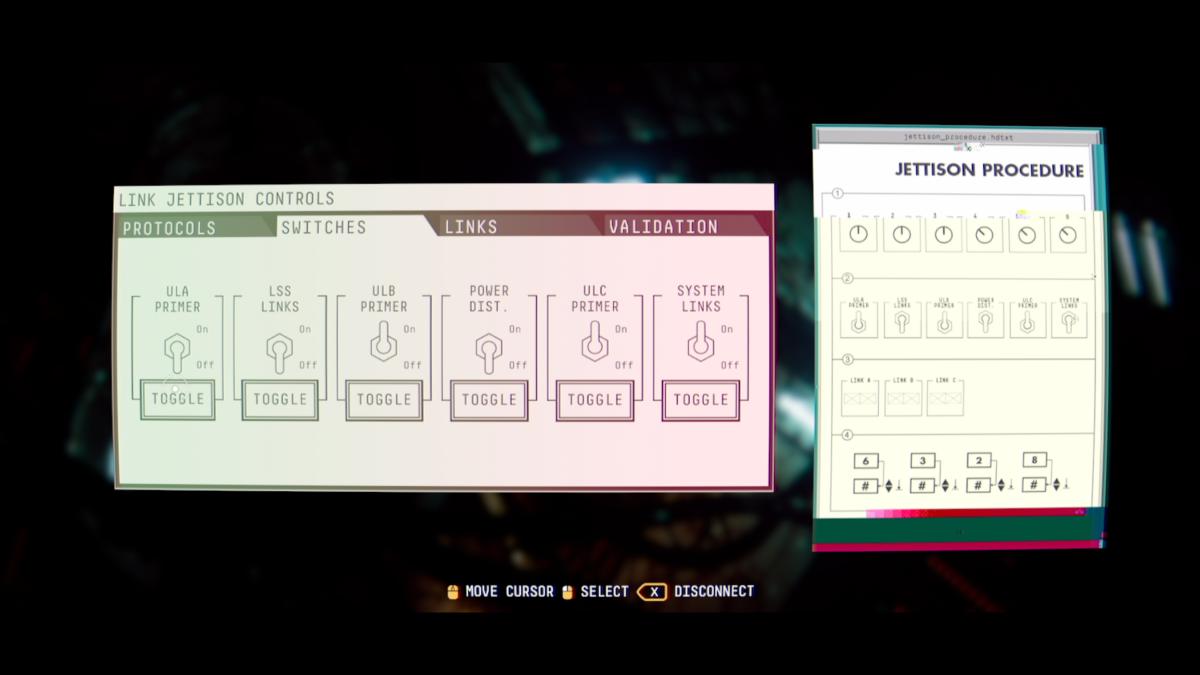 That next project is Observation, a sci-fi thriller that builds off the ideas in Stories Untold. I think No Code’s co-founder and lead writer Jon McKellan summed it up best during last year’s unveiling: “Observation is kind of 2001: A Space Odyssey—but you’re HAL.”

You play as SAM, short for Systems Administration & Maintenance. In other words, you’re an artificial intelligence, the computer presiding over the Low Orbit Space Station (LOSS) and its crew, orbiting 410 kilometers above the Earth. You have a hand in nearly every mechanical function—opening and closing doors, monitoring life support systems, keeping the station in orbit.

Something’s gone wrong though. Observation opens with darkness, with static, and then with panic. “We’ve had some sort of accident,” says a voice you’ll soon learn belongs to aforementioned crew member Emma Fisher. “A collision or something maybe, I don’t know.” 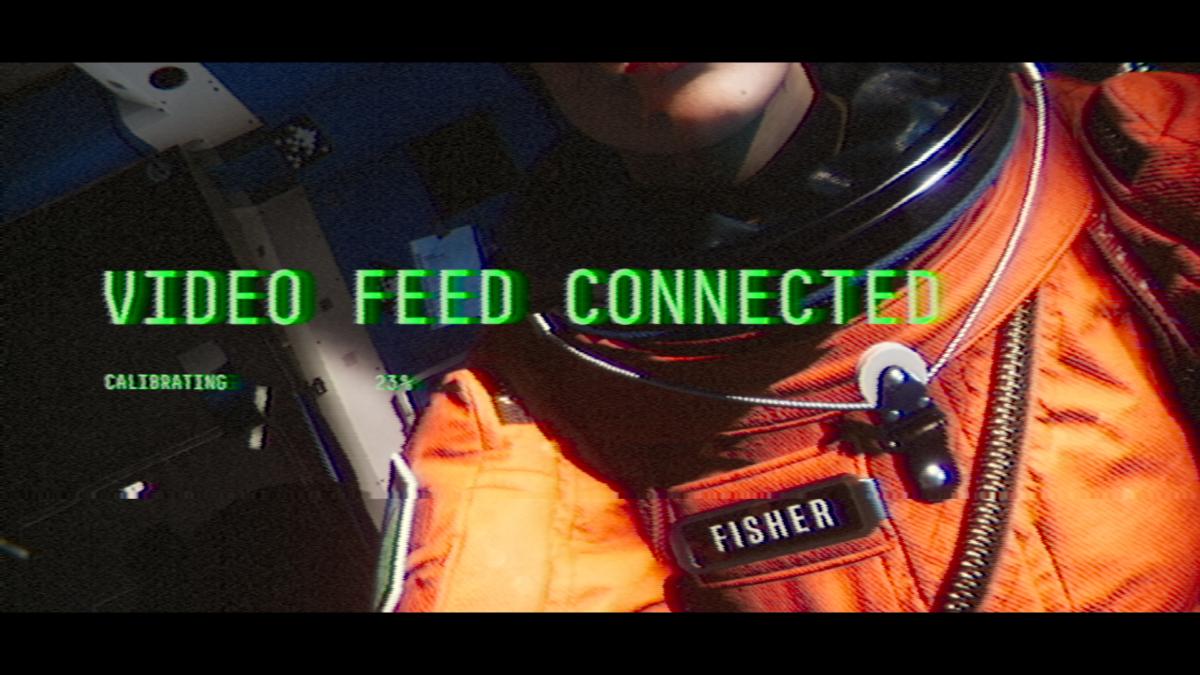 Much of Observation is spent unraveling this central mystery: What happened, and why, and who (or what) caused it?

But much like its predecessor—and 2001 as well—Observation is great at wringing tension from the mundane. SAM’s functions are limited. He’s a voyeur, quite literally the ghost in the machine. Picture HAL 9000’s glowing red eye, the camera through which he peered into Discovery One. That’s SAM.

Or rather, that’s you. The space station is cobbled together from a few dozen capsules, each of which has two or three cameras for SAM to take over. You “traverse” the station this way, popping into RU-4 to check on communications through the nearest camera lens, or into EAS-11 to operate the airlock. Occasionally you’ll inhabit a little floating robot, though there your narrow field of view is hindrance enough that the increased mobility is barely worth it. 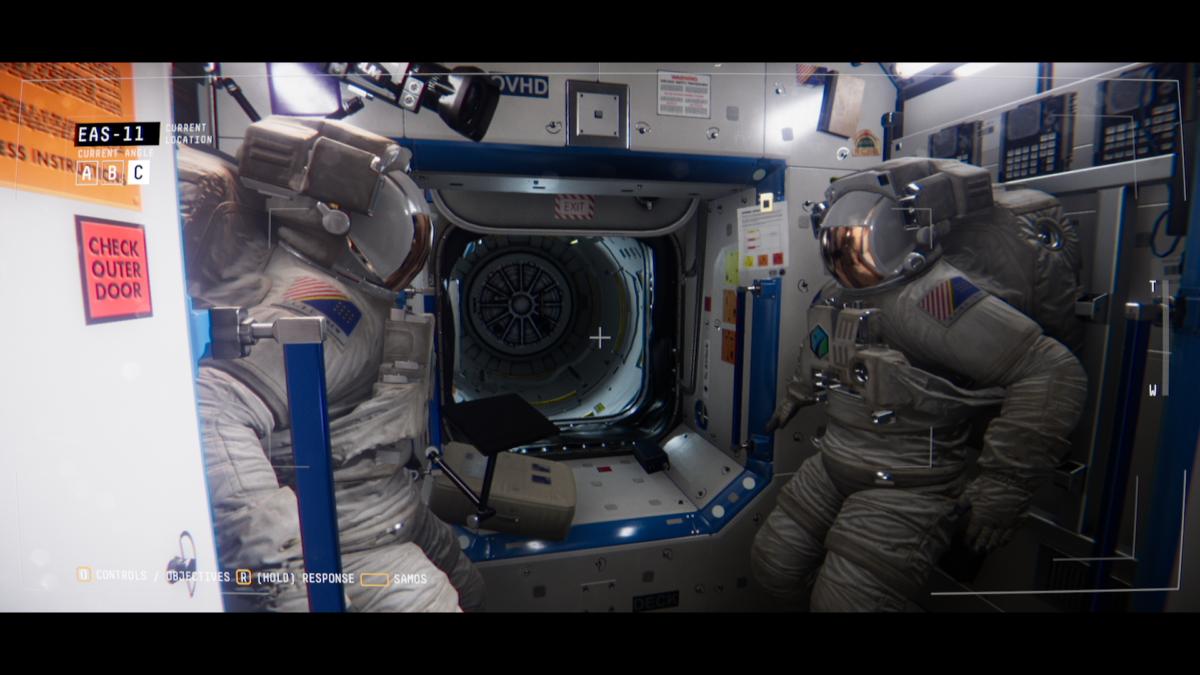 The tech fetishism of Stories Untold is everywhere here, an ode to the retrofuturist science fiction of 2001 as well as later films like Alien and Terminator. Whenever SAM enters a new camera it pops and distorts like a worn VHS tape before slowly clearing, the grain giving way to a pristine image. Look carefully and you can see the other camera hardpoints in each capsule as well, a fantastic little detail.

Panning around also reveals other systems SAM can integrate with—usually doors, but occasionally more sophisticated tools like the coolant system or various sensors. Each of these subsystems has its own fake interface to decipher, dials to adjust or buttons to press or technical schematics to parse.

These are the primary “puzzles” in Observation, though like Stories Untold there’s nothing too difficult here. Rather, it’s an exercise in worldbuilding. Where Stories Untold slavishly recreated analog hardware, Observation does the same for early digital, simulating the rudimentary software of the ‘80s and ‘90s. One of my favorites is the Sensor Calibration Tool, and it has nothing to do with the puzzle itself. Rather, in the top-left you’ll spot the torn page icon that once indicated a broken image in Netscape circa 1994. Delightful. 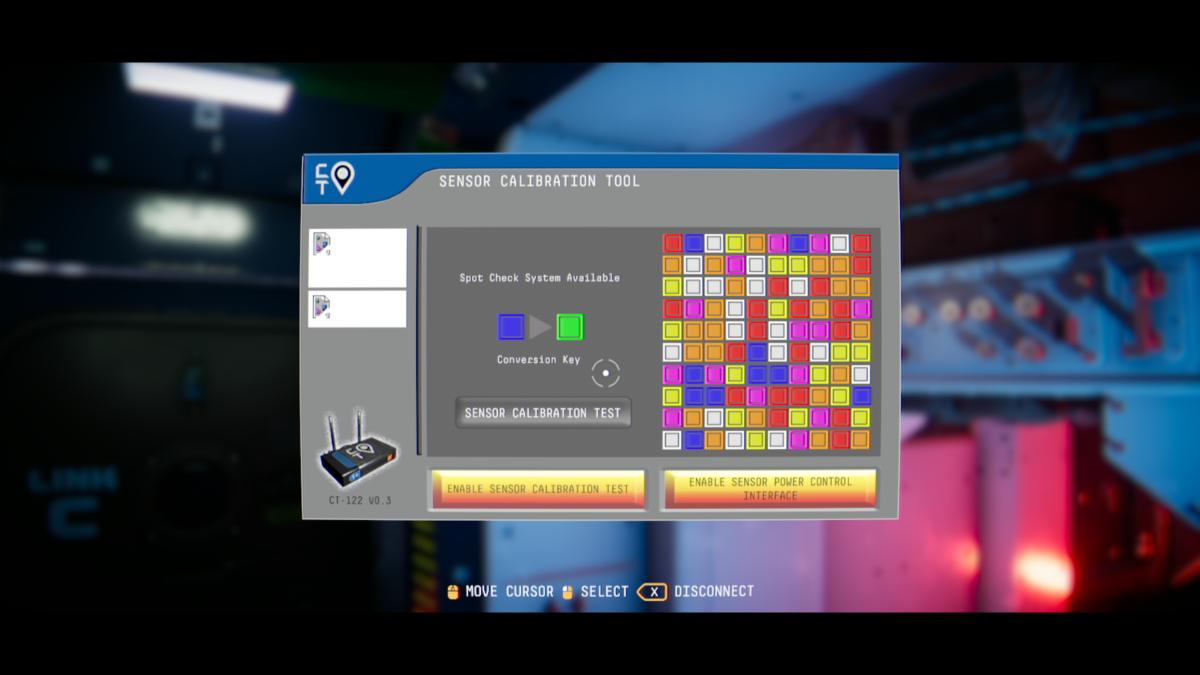 Inhabiting SAM is slow and deliberate, sometimes frustratingly so. Even towards the end of the game, six or so hours in, you still need to link SAM to every new system you come across—a process that requires zooming a camera in close enough, then holding down the right mouse button to start the link, then typing in a series of three random numbers. Then, if it’s a door, you often need to consult a schematic to figure out the pattern to unlock it, then plug that in, then open it.

None of these steps are hard, nor very satisfying on their own. Together they lend Observation weight though. You become intimately familiar with the space station, and with SAM’s capabilities. It forces you to become SAM, even to think like SAM to an extent.

It also acts as counterbalance to Observation’s disconcerting story. 2001’s Monolith is an obvious touchstone because of the HAL comparisons, but honestly Observation feels more reminiscent of Jeff VanderMeer’s Annihilation and other recent “New Weird” works, the everyday contrasted with the extraordinary. Everything you do as SAM is so relentlessly normal. Everything that happens around SAM is not. 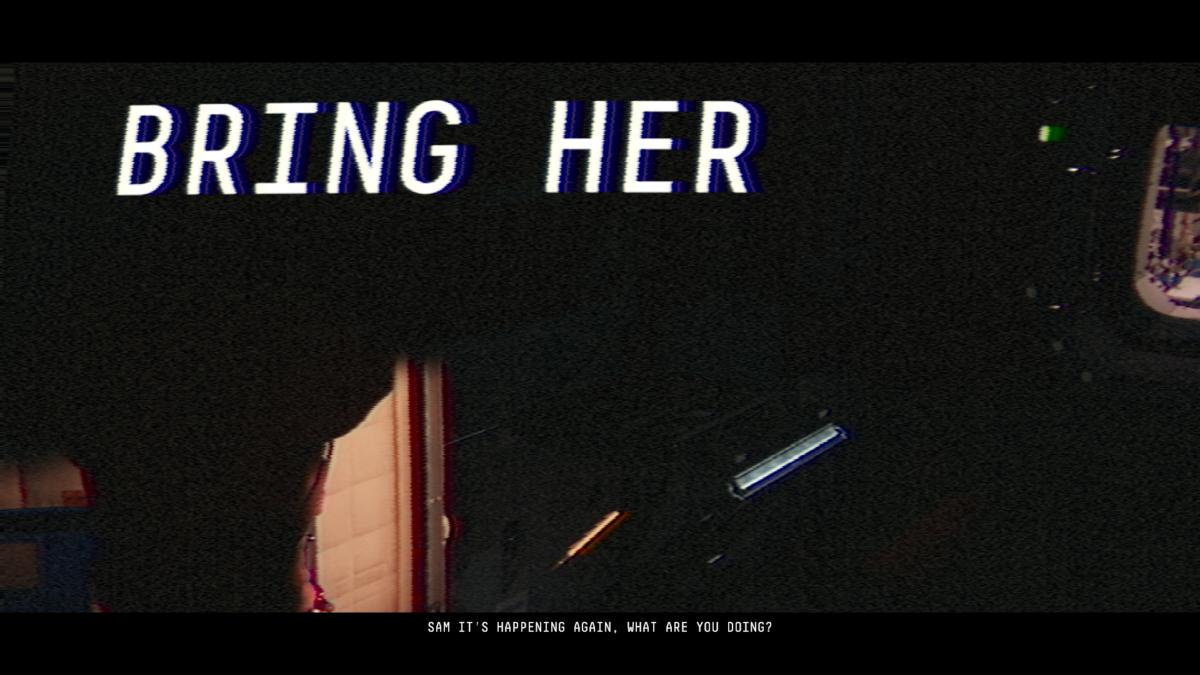 It’s an incredible journey, one that comes into slightly clearer focus if you take the time to scan the station for collectibles in the form of audio logs and supplemental documents—though admittedly this process is often at odds with the story’s pacing.

Even if you do take those detours, there are no tidy answers waiting. Observation starts in media res and ends on something of a cliffhanger. “Always leave them wanting more,” right?

And I do. No Code’s two for two, and has fast become one of my favorite developers. I’m unsure the same ideas can support a third game—Stories Untold was a successful experiment, Observation proves it out—but that’s a question for the future.

Observation is grander than Stories Untold, more ambitious by half, but equally fascinating and inventive. It’s a pastiche of science fiction new and old but knows when to lean into expectations and when to subvert them, and its approach to mechanical realism is so uncompromising it becomes an artistic statement instead of mere mimicry. I’m already curious what’s next.