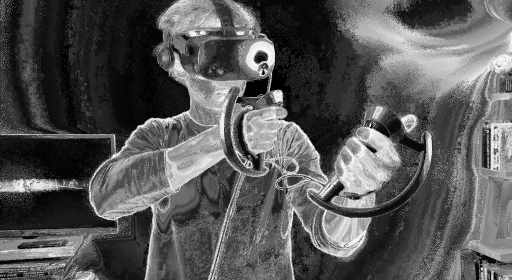 It’s been a surprisingly active end to the year for the PC VR scene.

Or at least it has on the hardware front: Varjo came out swinging with its beastly — if somewhat flawed — Aero headset, HP has promised a significant upgrade to the Reverb G2 headset that might well reverse its fortunes, and Pimax hosted a lengthy showcase in which it revealed the ambitious ‘everything and the kitchen sink’ Reality series. Clearly, companies are keen to fill a void Meta created by exiting the dedicated PC market with the end of the Rift S and the publishing of its last PC VR exclusive in Lone Echo 2 just last month.

And, all cautions considered, these are three incredibly exciting products. Granted the Reality series and Aero are ludicrously expensive at the $2,000 barrier, but they’re promising to push a more immersive, satisfying VR experience that delivers on incredible fidelity you simply can’t achieve with a standalone device (the Reality series’ own standalone mode will make significant concessions to get running too).

But what, exactly, are we meant to play on them?

The answer, it appears, is kind of one big collective shrug. Varjo, in fairness, is positioning the Aero as a device for sim-players that accept only the very best when it comes to apps like Microsoft Flight Simulator and Assetto Corsa. Pimax, meanwhile, made an effort to showcase some existing and upcoming indie content in its showcase. But, other than that, are we really going to lay down anywhere from $600 to an eye-watering $2,400 just to play Half-Life: Alyx and Boneworks again?

This is the shadow looming large over the PC VR scene right now. With Meta refocusing its efforts on Quest-first and often Quest-exclusive experiences and Valve turning its immediate attention to the Steam Deck console, there’s just no one going to bat for PC VR content in a significant way. The developers that stubbornly persisted through the tough early years of consumer VR are recentering their resources on standalone, with a few studios such as Zulubo Productions with Vertigo 2, Vertigo Games with After The Fall and M-Theory and Oddboy with Wanderer as some of the last few that look to be really pushing the platform. SteamVR is no stranger to low-quality shovelware, but a quick scroll down the upcoming games list in the VR category shows a damning scarcity of things to be excited about.

Pimax itself highlighted this in its recent showcase, showing demand for more high-quality content in a user survey. But all it could really say in response was that it was up to developers to provide content, as if a high-end $2,400 headset was about to bring in scores of new VR users from which they could reap a return on their investment.

And yet, at the same time, VR usage is growing on Valve’s store, largely now pushed by the Link, AirLink and Virtual Desktop streaming modes on the Quest 2 which occupies a meaty 35% of the platform’s market share. John Carmack himself recently noted a surprising retention in Link users during his Connect developer keynote. Sadly, it doesn’t seem anyone’s there to greet and encourage this new wave of users.

What PC VR feels like it’s really lacking, then, is a champion – a group to identify, evangelize and fund a refreshed wave of VR experiences being built for PC first, even if they end up elsewhere too. There are studios out there that feel ready to be rallied under that wing – the revelatory stealth systems of Neat Corp’s Budget Cuts series or the bleeding-edge, physics-driven showcase of Stress Level Zero’s Boneworks. Future Immersive found a strong reaction to the ship-battling Furious Seas and AEXLAB is charging ahead with the tactical multiplayer gunplay of Vail VR. Even the excellent The Eye of the Temple was built to essentially exhibit the room-scale technology that Valve pioneered but is struggling to find its deserved audience amongst the quiet chaos of Steam. These are incredible games that make a strong case for the types of complex, demanding experiences that only PC VR can provide (at least without big drops in scope and graphical fidelity on Quest).

I suspect the closest we’ll get to that is with Sony’s renewed efforts for its PS5 VR headset in 2022 which might, in turn, bleed into the PC marketplace. HTC does a great job with its Viveport Infinity subscription, but it’s fueled by existing content being offered at great value, with nothing truly new or exclusive to attract scores of people to the platform and its Vive Studios efforts seem to have dried up at least from a gaming perspective.

Really, though, I’d argue Valve is the one that should be making those efforts, and it’s held back by its pretensions of being as hands-off as possible when it comes to releasing content of Steam. The company released one of the best (and more expensive) VR headsets of recent years but, outside of the admittedly herculean effort that was Half-Life: Alyx, it’s visibly done frustratingly little to incentivize people to choose — or at least visit — SteamVR over Meta’s growing ecosystem. Valve might not be approaching the VR market the same way Meta is, but it could certainly stand to promote its own platform with a cohesive line-up of SteamVR-first games for PC VR users to countdown the days to, and its own Steam Festivals — while appreciated — don’t really feel like they’re moving the needle.

I remain hopeful for the future of PC VR. A rising tide lifts all boats, and there’s likely to be ‘enough’ to play between Quest and PSVR 2 ports in 2022. But the platform that once led the charge for consumer VR gaming has become an undeniable afterthought, and it doesn’t have to be that way.