Persona 3 Portable’s introduction of a female protagonist was a brave step forward that fans have longed to see repeated in subsequent games for years. Persona 5 Royal’s initial reveal of Kasumi Yoshizawa set tails wagging about the prospect of a new heroine alongside Joker, but in reality she turned out to be nothing but an additional party member. Our dreams were scuppered once again, and with no sign of Persona 6 on the horizon, all we have is the past to look back on. As the long-awaited modern port arrives, how does the third entry handle its playable female character all these years later? Listen, 2006 was a very different time, okay.

The first thing you’ll notice upon picking the female protagonist is how pink everything is. You know, the colour that girls are legally required to love and have on all of their things. I have nothing against the aesthetic, but in Persona 3 Portable it’s stereotypical, garish, and covers almost every single menu you come across. The character portrait that dominates the screen and outdated dialogue do a pretty solid job of defining your identity anyway, so I bet Atlus just didn’t want us to forget we had a vagina and were lesser as a consequence.

Persona 3 originally released in 2006, and thus many of its societal biases and gender norms are representative of how anime, manga, JRPGs, and perhaps most importantly – Japan – were at the time. That doesn’t seem like a long time in hindsight, but this medium has come a long way in regard to sexual equality over the past two decades. A number of games are now led by empowering female characters, while blockbusters aren’t afraid to critique the problematic endurance of toxic masculinity and how games continue clinging onto it. Even JRPGs, with recent hits including Nier: Automata and Final Fantasy 7 Remake, have grown far more subversive and willing to acknowledge their flawed cultural history. 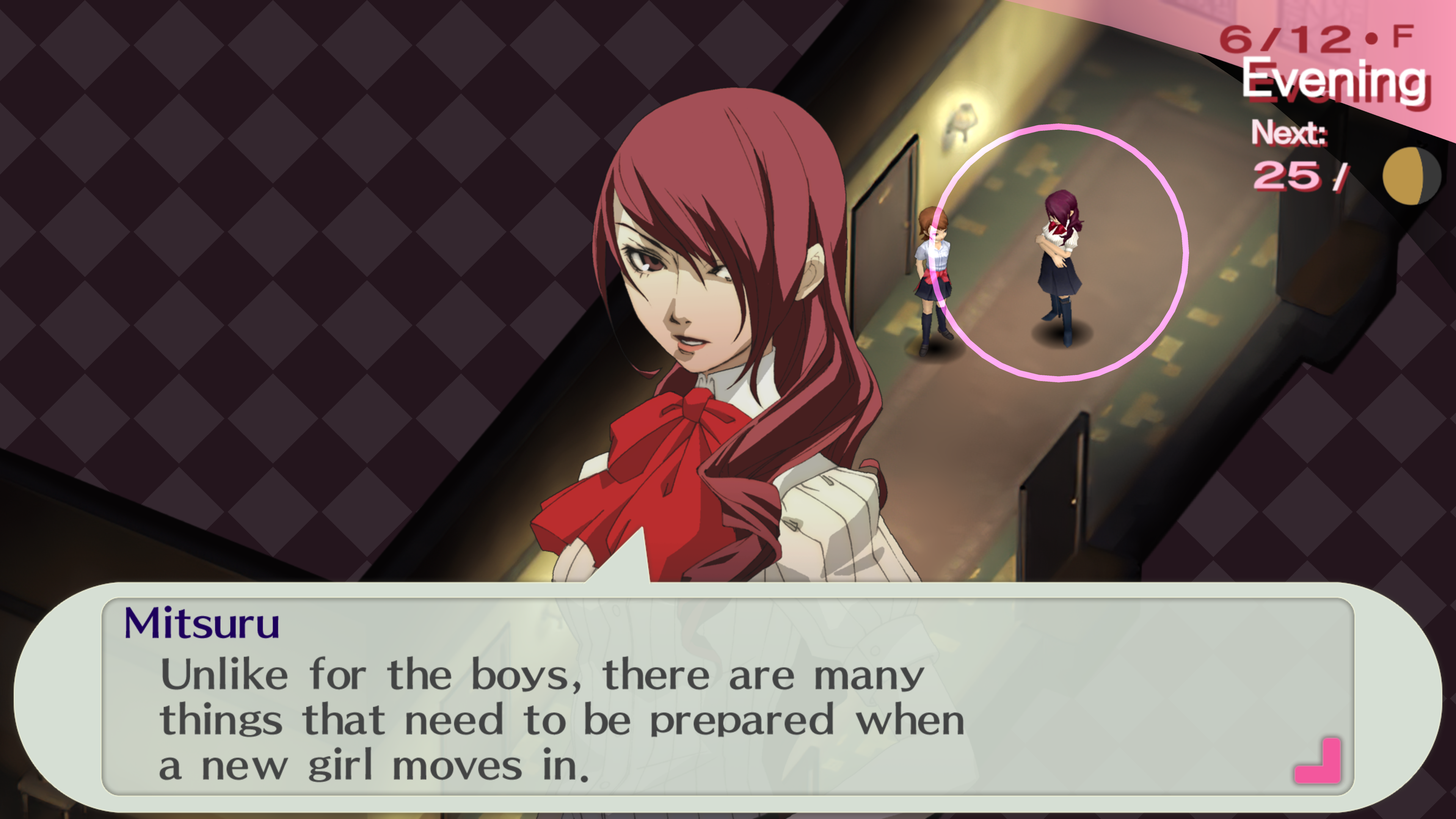 Unfortunately, Atlus never got the memo, since its modern catalogue is often taken to task for its lack of inclusivity and tired views on sex and gender. Persona 5’s first palace is a testament to overthrowing sexual harassment in the workplace and education system, but is followed up by a dungeon that asks the very same female character at the centre of previous trauma to strip naked to gain access to it. Thematic messages seldom build on one another, and thus the central idea of youths rebelling against an unjust society falls flat. Parts of the writing and many of its characters still excel, but a spiteful ignorance remains alongside a reliance on archetypes that other properties have managed to otherwise abandon. I love Persona, which means I have to bring up stuff like this all the time. Same goes for the likes of Catherine: Full Body, 13 Sentinels: Aegis Rim, and similar games that refuse to value women as characters deserving of development and agency equal to their counterparts.

Persona 3’s female protagonist is initially viewed by other female characters as a sign of relief, declarations along the lines of ‘girls must stick together’ and ‘let’s ignore all of those icky boys’ instead of delving into backstories with maximum impact. Yukari Takeba hides a tragic past that her social link does an excellent job delving into, but the way she treats you like a friend with additional value purely because of who you are and doesn’t look past that irked me, like me being a woman was a demonstrable part of my place in this society and not something I could come to interrogate. There is even a line later on about another girl in the game and one of the dialogue options allows you to suggest same-sex attraction. Yukari is more or less disgusted by this idea, which I suppose is fitting given the state of queer rep back in 2006, but even back then it came across as weirdly aggressive.

Your role in Persona 3 Portable as a mostly silent sexual object is exemplified further with characters like Junpei Iori, a perverted weirdo who is coincidentally still voiced by alleged abuser Vic Mignogna. I wouldn’t blame some for switching to Japanese Audio for this alone, even more so when the majority of his lines when playing as the female protag involve the thrill of living with a house of sexy girls, hitting on fellow students, or wanting to get his rocks off. Much like Yukari, beneath the dated flaws sits a compelling character arc, but it’s much harder to look past nowadays, even more so when the port on display is otherwise so basic.

It all just grows a bit tiresome in how Persona 3 reinforces the unfair assumptions and abuse many women face in reality. You could argue a game trying to be this dark and current in its commentary is doing such a thing on purpose, but it really isn’t. It originates from a culture of ingrained sexism that games and anime have been dealing with since their inception, where women are often viewed as objects and lesser beings not deserving of equal agency. To my dismay, things haven’t changed much in the past decade or so. The language used is more sensitive and women and gender non-conforming characters have more of a presence, but Persona and the wider landscape of JRPGs are male-dominated and sexist in ways genre fans often have a hard time confronting. Trust me, I’ve done this song and dance before. 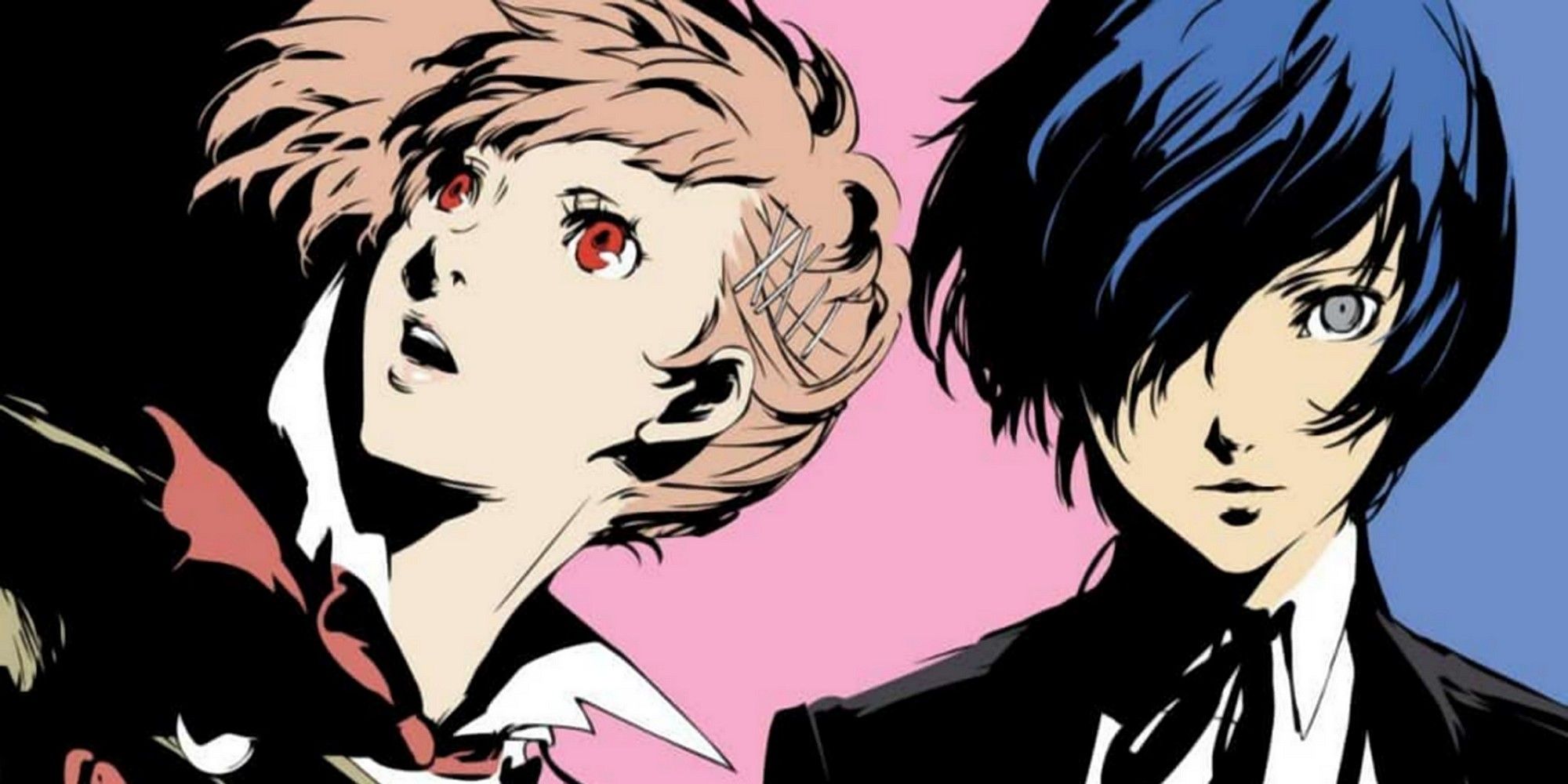 Persona 3 Portable has fallen on the back-burner for now as I continue with Persona 5 Royal and prepare for Fire Emblem Engage, but after 20+ hours as the female lead, I’ve left with a feeling of dejection, like whoever wrote this character and their place in this narrative neither understood women nor knew how to make them matter alongside a larger cast who should have far empathy for those frequently ostracised from the status quo. Women play a part in that equation, but from the dialogue and storytelling seen here, you wouldn’t think so.