Persona 3 Still Doesn’t Have The Modern Release It Deserves

Atlus has just launched ports of Persona 3 Portable and Persona 4 Golden to modern consoles, allowing old fans a chance to take a trip down memory lane while newbies can experience them for the very first time. Persona 5 and Royal saw the fanbase boom, so it’s no surprise that lots of fans have yet to check out these earlier titles. As much as I enjoy and would recommend both, I can’t help feeling that this launch missed the opportunity to settle an old score once and for all.

It’s become standard practice for Persona games to receive an enhanced version some time after the original launch, which packs in a host of extra content, such as extending the plot and various new features. More than enough to tempt players to pay for the game again to experience all that shiny new goodness. Persona 5 had Persona 5 Royal, Persona 4 had Persona 4 Golden, and Persona 3 had Persona 3 FES… and then Persona 3 Portable. Therein lies the problem.

Persona 3 launched in 2007 for PlayStation 2 before receiving the extended FES version in 2008. This new iteration added a new playable epilogue, as well as several improvements to social links, new personas, events, and more. It’s your standard Persona upgrade, essentially. It adds a few gameplay tweaks and a nice chunk of extra plot to sink your teeth into. 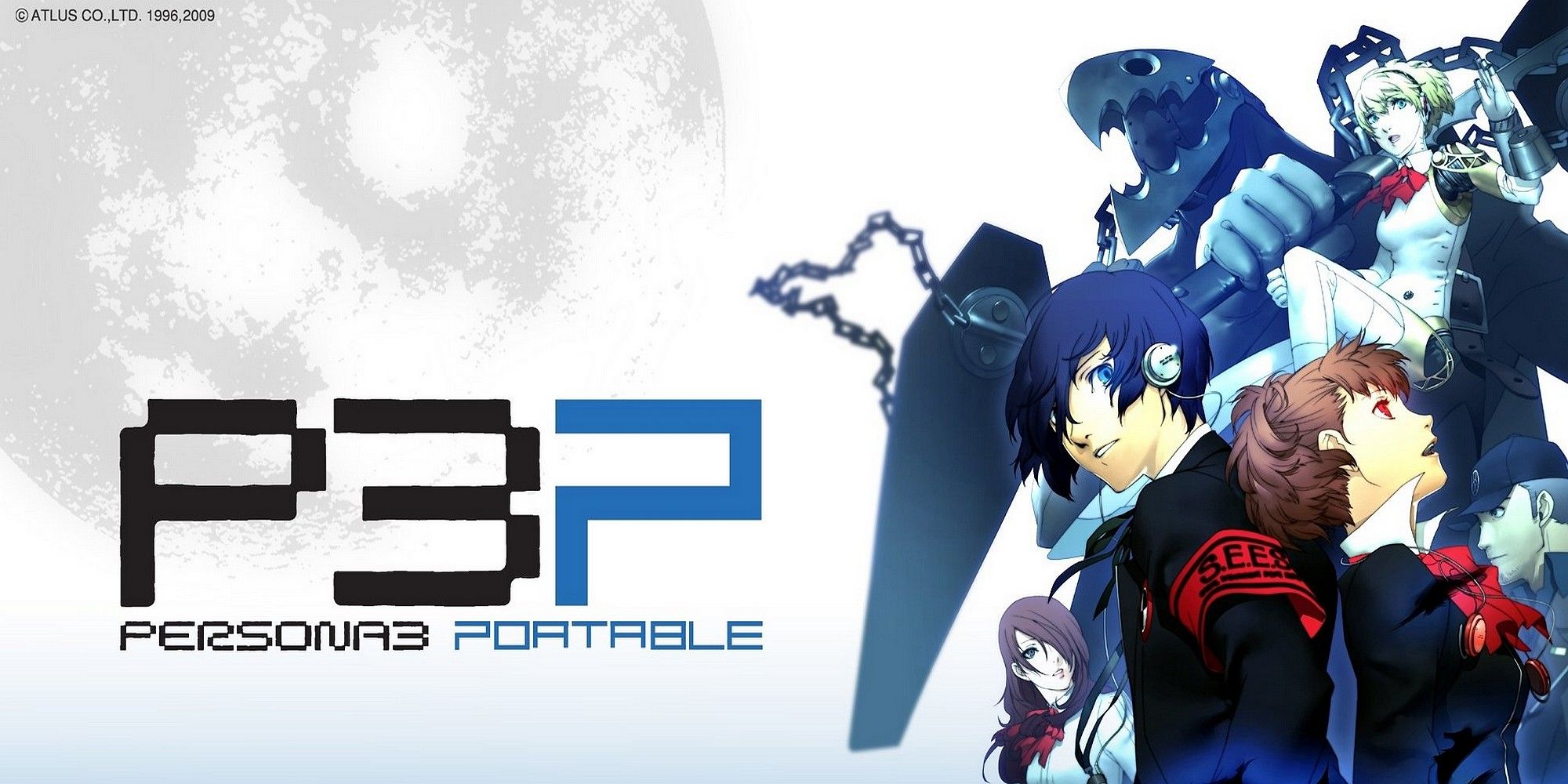 In 2010, the PSP received a new version — Persona 3 Portable, but rather than build on the FES version, it’s an abridged version of the original P3. Before you think that this immediately makes Portable the worst version, it’s unfortunately not that simple. While it cut out other content, it added a host of new features and quality-of-life improvements that, by that time, fans had become accustomed to in Persona 4, and it even added a whole new female protagonist.

With both FES and P3P offering juicy bits of additional content not found in the original, I wish we received a definitive version instead of a straight-up port of P3P. If only Atlus had decided to pen-pineapple-apple-pen those two games together, and, bam! Persona 3 FES Portable!

If you’re not convinced, let me break it down for you. The three notable losses in P3P are the missing epilogue, missing cutscenes, and the lack of proper exploration. There are still some small bits of animation in P3P, but it’s only a handful of snippets, which is nothing compared to the gorgeous anime cutscenes of FES. 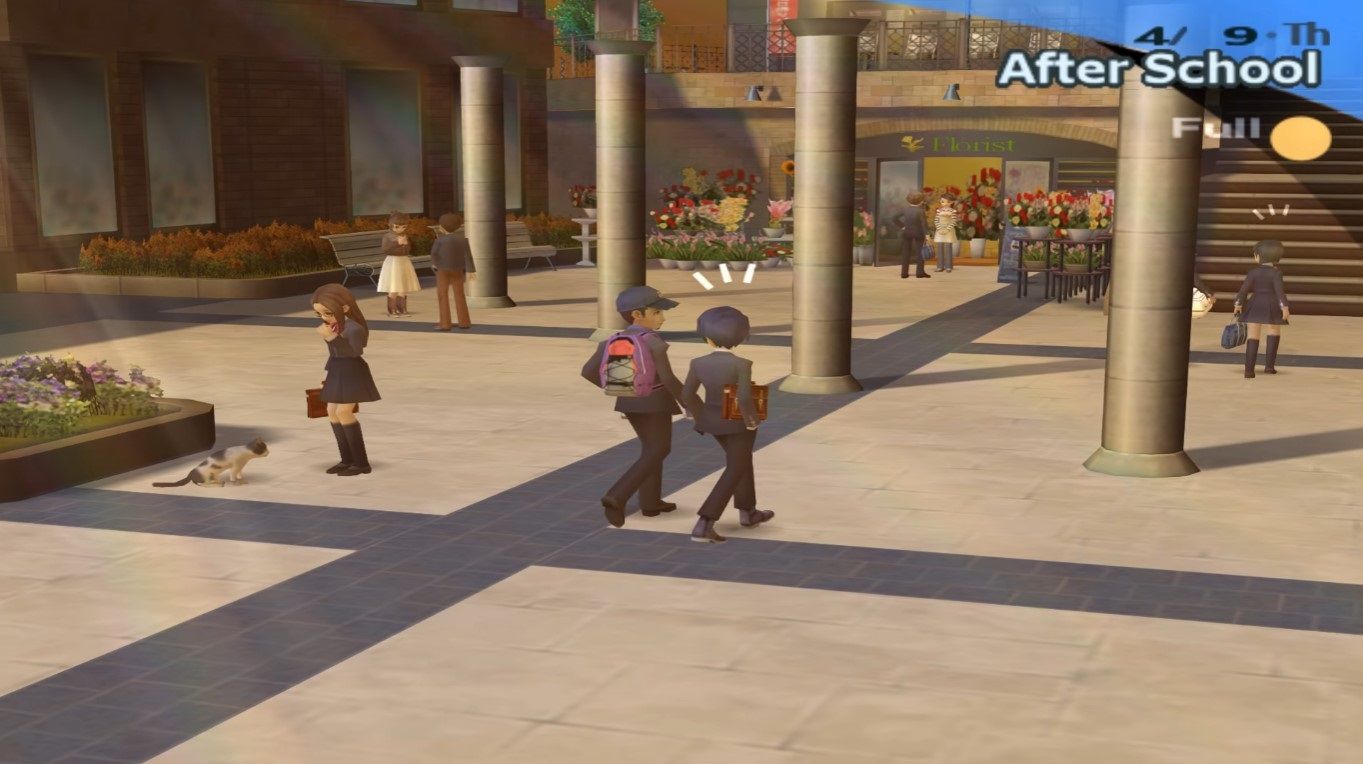 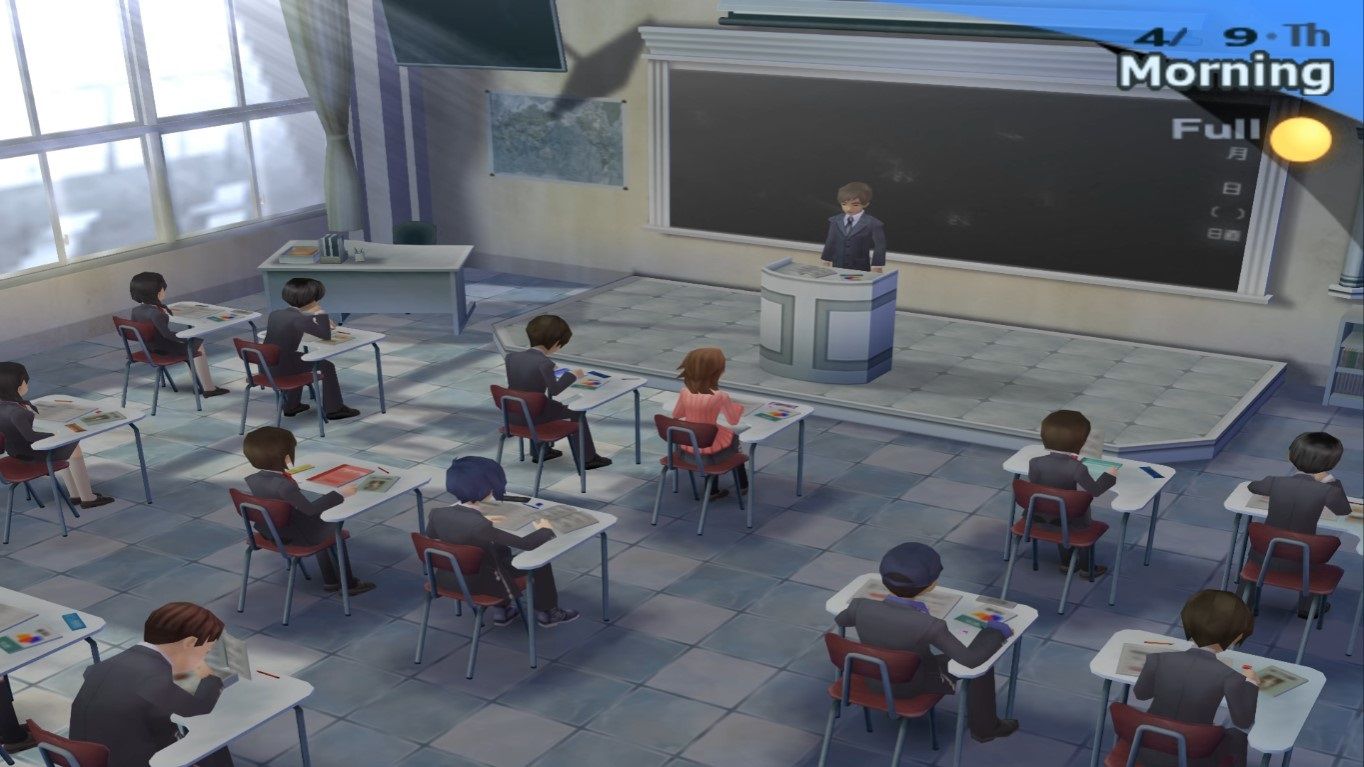 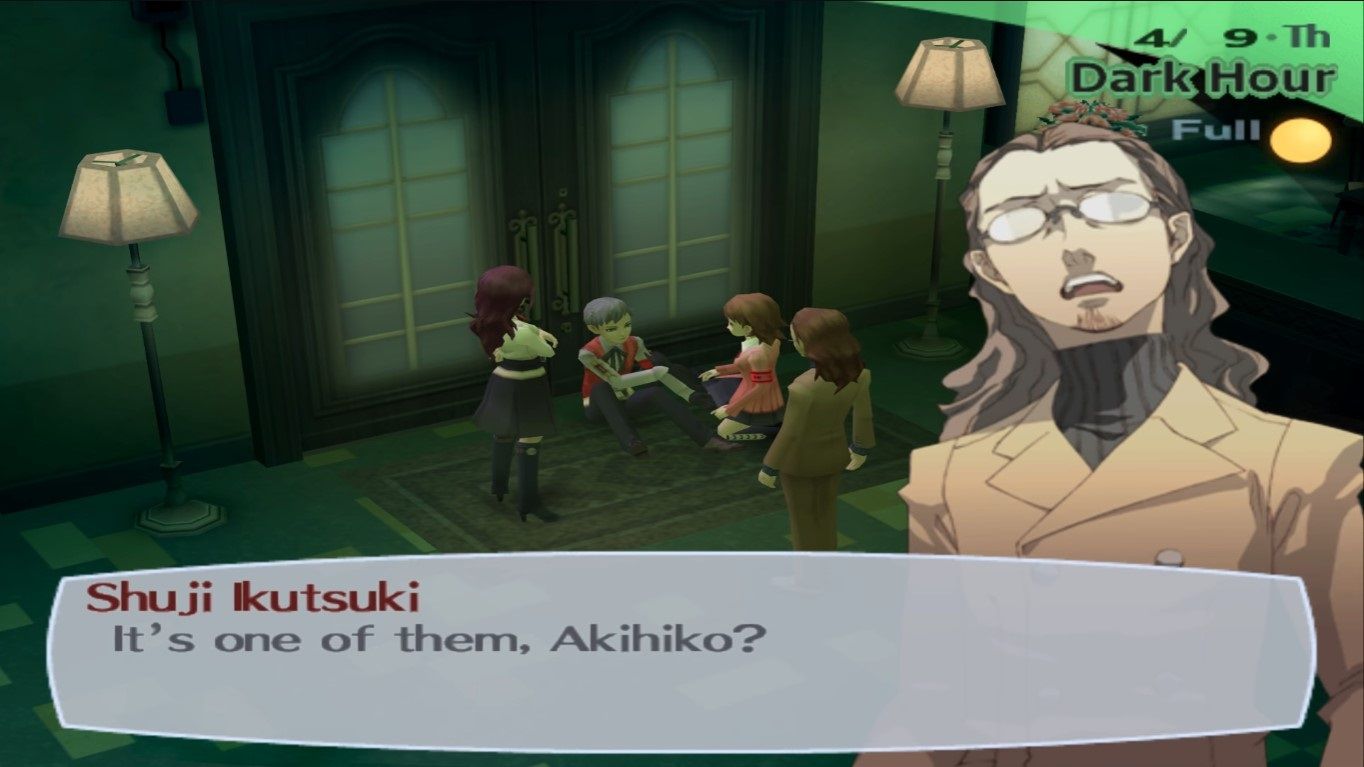 P3 and P3 FES allow you to move around in 3D space. Like most games, you run around, speak to NPCs, interact with objects, and run to a door to zone into the next area. For conversations, alongside the voice acting, dialogue boxes appear on the screen with a changing 2D character portrait, with the 3D characters acting out the scene.

In Portable, however, the only explorable 3D area is in the dungeon area, Tartarus. Everywhere else is just a static screen where you move a cursor around to select characters or objects to interact with. You move around by clicking door icons or choosing locations from a dropdown menu. It’s all very visual novel-like. Conversations are now just the 2D character portraits against a static background, though still with voice acting. Even the classroom scenes are reduced to a bleak, muddy-looking generic class image rather than the fully modelled class scenes of the earlier versions.

It’s quite jarring to go from FES to P3P, as it feels like such a big step backward. The omitted animated cutscenes and 3D exploration result in such a stark contrast between the two. P3P does have its saving grace, though, the female protagonist route being the most impressive addition. Though the main plot follows the same path still, certain scenes and conversations change, giving a surprisingly refreshing change of perspective and a slightly softer tone. 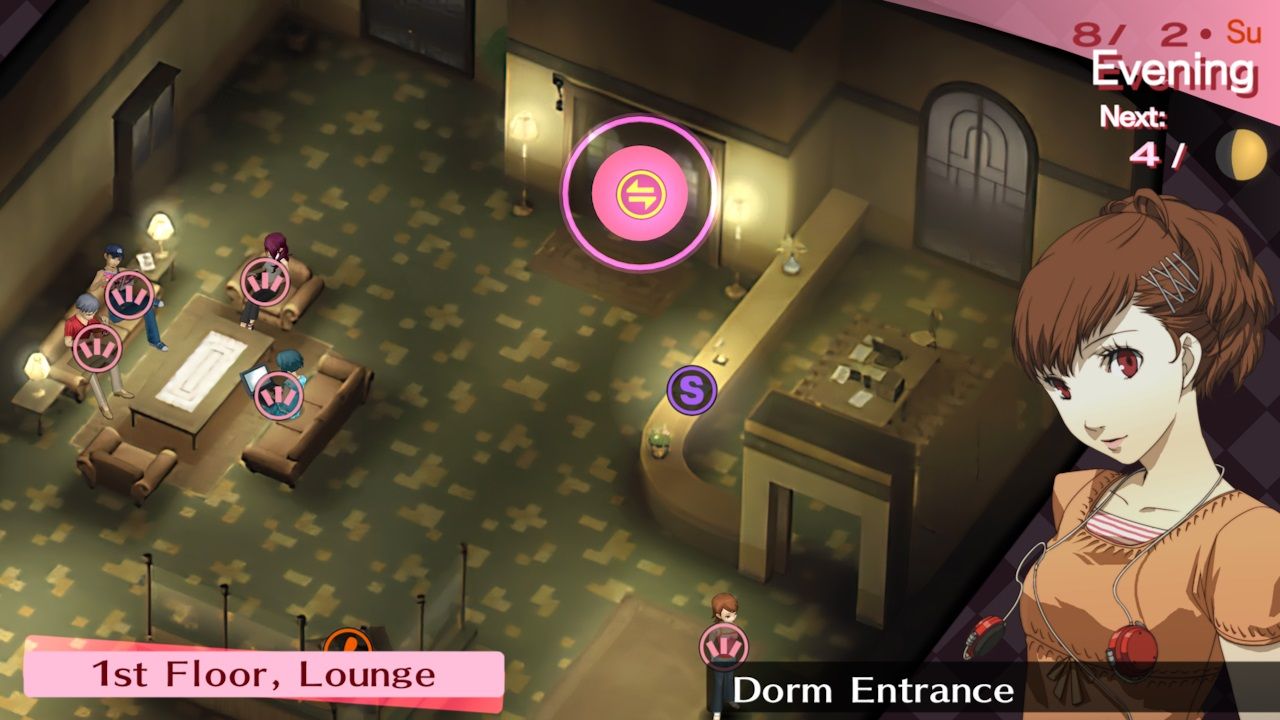 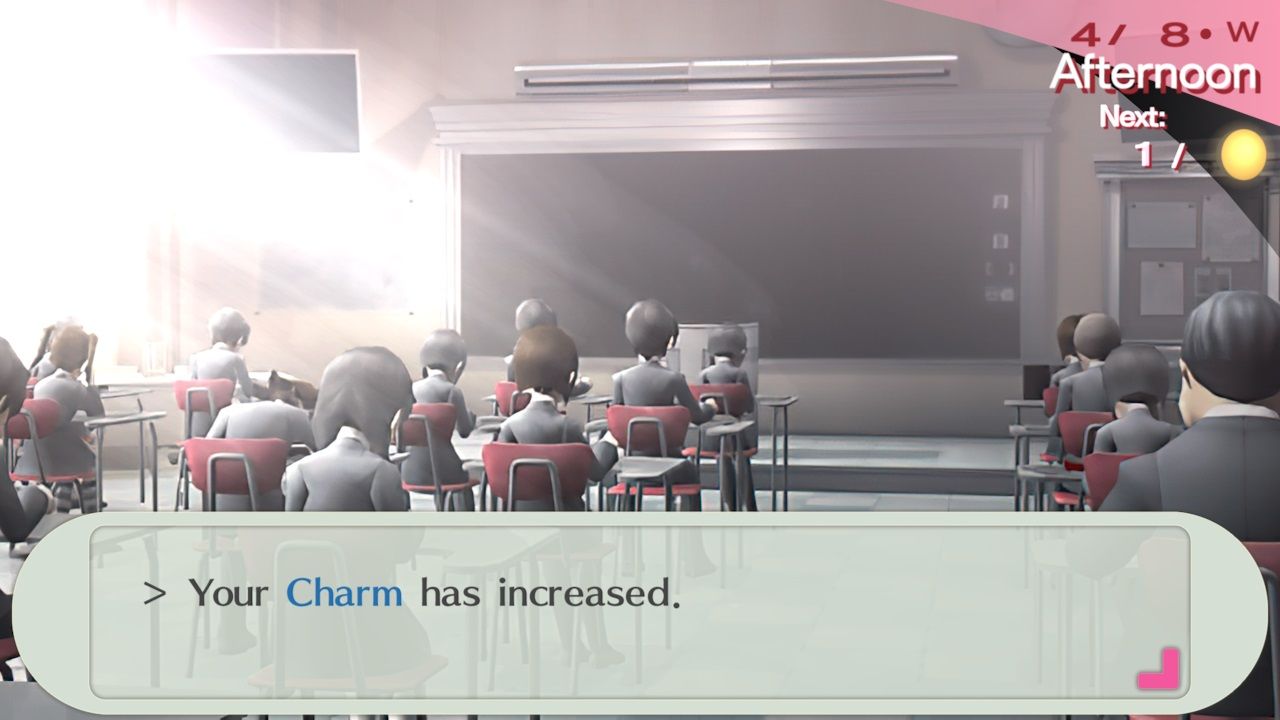 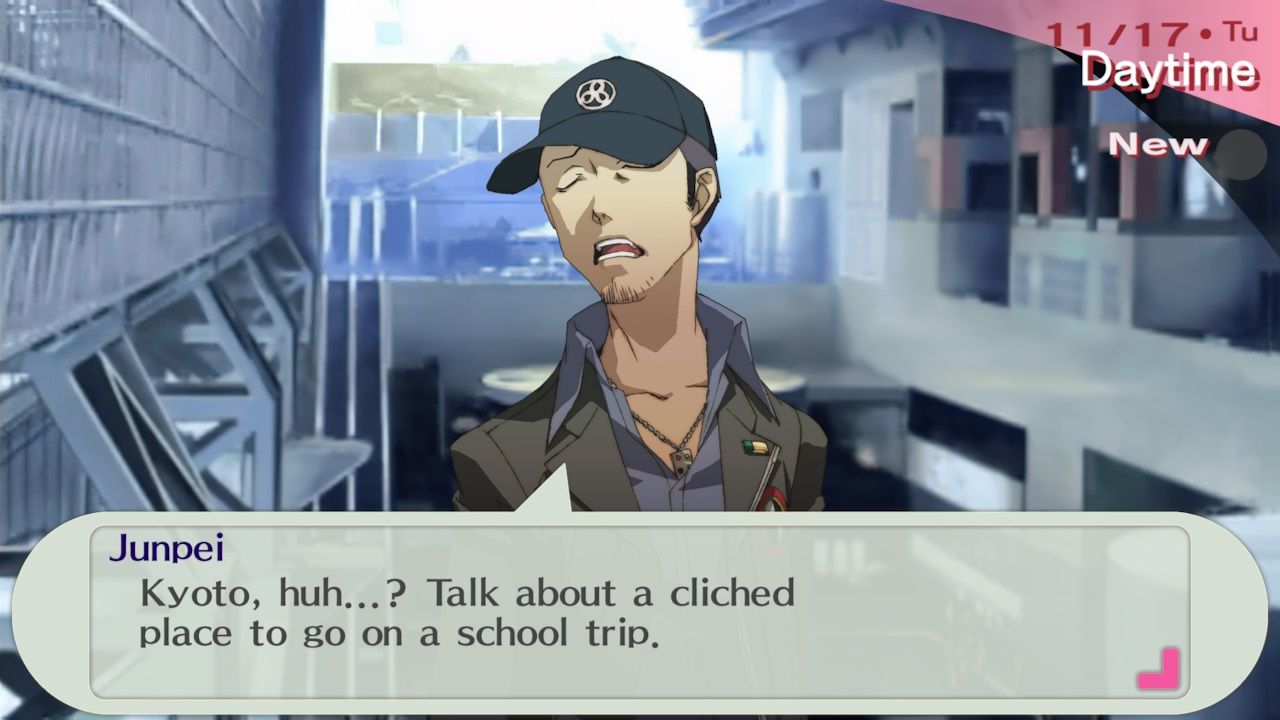 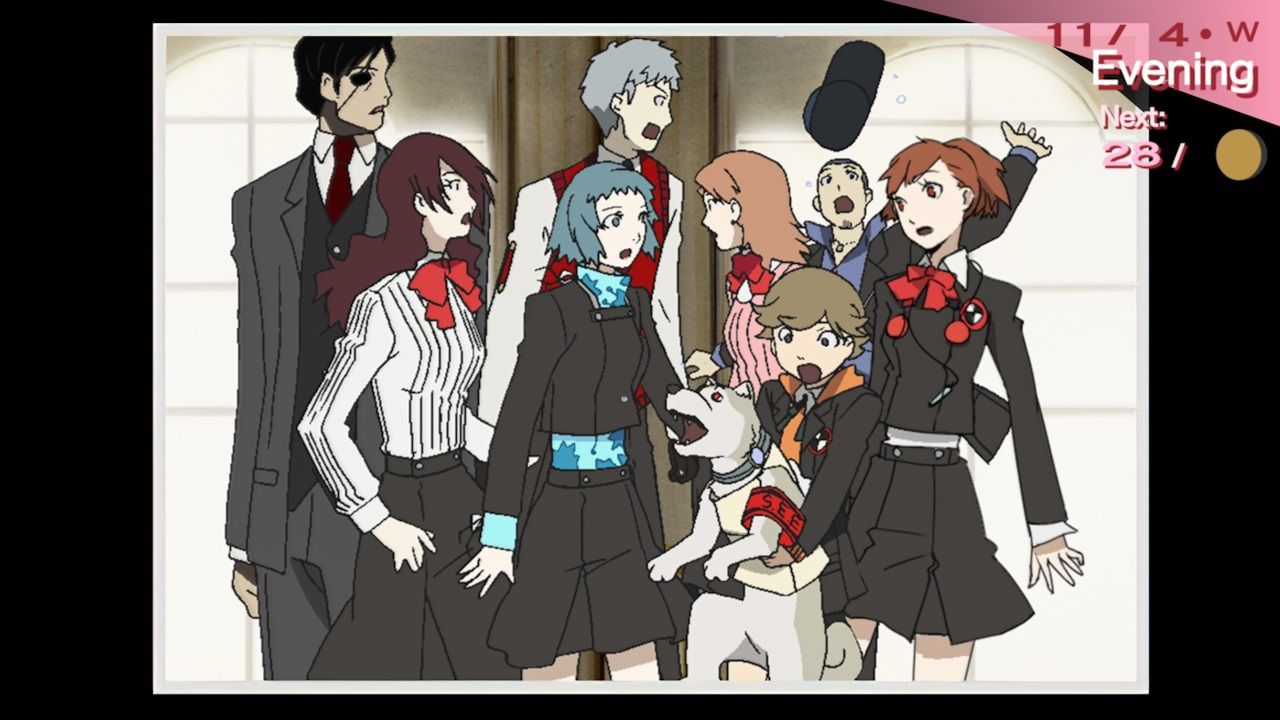 More importantly, the female protagonist gets improved social links. Links with your male SEES teammates are available, and the game allows you to choose to romance them or not. The male protagonist, on the other hand, has no choice. If you progress a social link with one of the female SEES members, you’re locked in with them romantically. So you either make no close friends or become an absolute playboy. The choice is yours.

It's the addition of the female protagonist that likely lost us the animated scenes in P3P, as I imagine it would have been too costly or time-consuming to recreate these scenes to swap the male protagonist for the female. It doesn't explain the lack of proper exploration, though.

Another big difference is the improvements made to general gameplay, like additional difficulties or the tweaks to the battle system, such as being able to control your teammates' actions and adding the 1 More bonus attacks. There are also new optional bosses, a new Velvet Room attendant, new music, and more. Plus, that super important stuff like your bed sheets are pink or blue depending on which character you choose.

There are great things about FES and P3P, but for some reason, we’re cursed not to experience them in the same game. The new port of P3P is still absolutely worth picking up, as even though it’s missing some core elements, the storyline is superb, and it’s now the easiest way to play P3 as far as accessibility goes. If you want to try out FES, you’re looking at playing on an older console or emulating it. Worst-case scenario, you can watch all the animated cutscenes on YouTube to see what you’re missing out on, but it’s really not the same experience.