In Pokemon Scarlet & Violet, the classic Pokemon League challenge — circling the realm, beating Gym Leaders, and so forth — is only one of three main quests. It's a lovely revamp that tests two new concepts out while giving longtime fans the Gym Badges we so desire.

Most players will reach Artazon Town in this most classic of questlines. It's a nice place, but we're here for a reason. Artazon's Grass-type guru awaits those who round up ten Sunkern. Here's where you'll find them, followed by — natch — how to best Brassius.

How To Get To Artazon Town 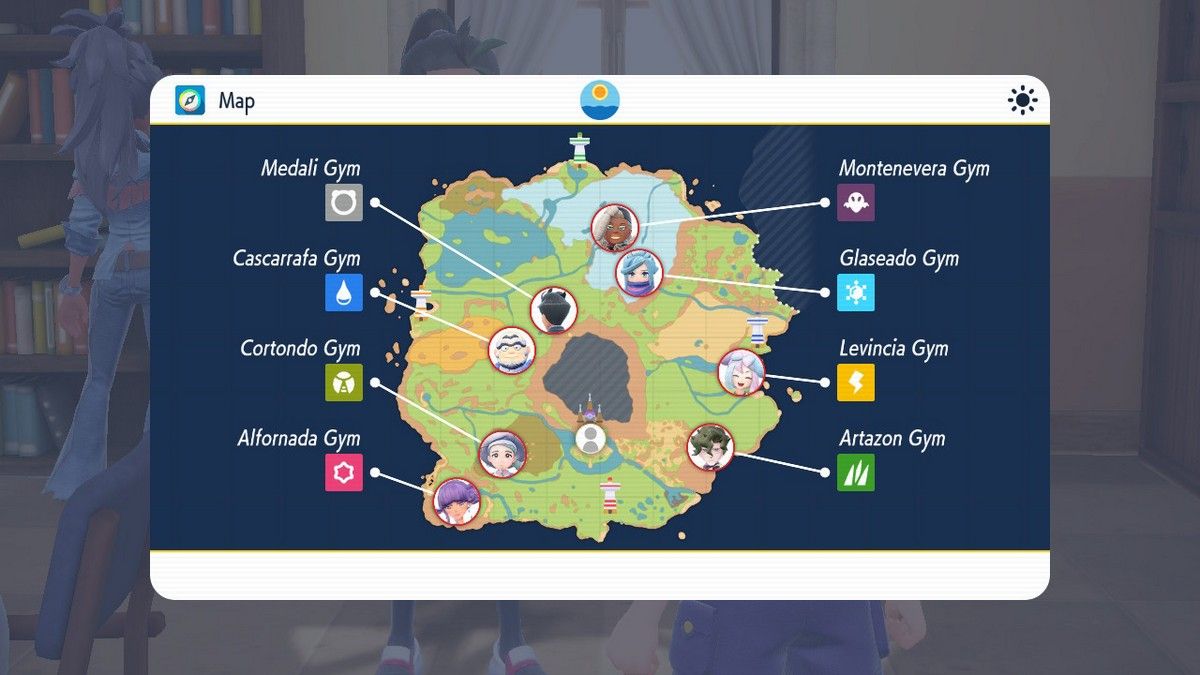 To reach Brassius' Grass Gym in Artazon Town, either head east from Mesagoza City or due southwest from Levincia. Since Iono, Levincia's Electric-type Gym Leader, is of a higher level than Brassius, the former will likely be the more common approach.

The terrain's pretty rugged en route from Mesagoza, but a collection of signs posted more thoroughly than Zubats in a Kanto Cave will surely lead the way. Every time you find one, it will keep you in the loop on how to get to Artazon, but feel free to explore here (and possibly handle the Stone Titan quest from Arven while you're in the area).

Players of Sun & Moon and/or Sword & Shield will recall Pokemon's burgeoning love of providing minor puzzle-like elements as the prelude to proper Gym Challenges. Scarlet & Violet are no different, and few of the Paldea region's tests match that tempo quite like Artazon's. When you're ready to get started, hustle over to the Artazon Gym — it's the tallest building in town by far.

Have a quick chat with the Artazon Gym's receptionist, who directs you to the Gym Test. 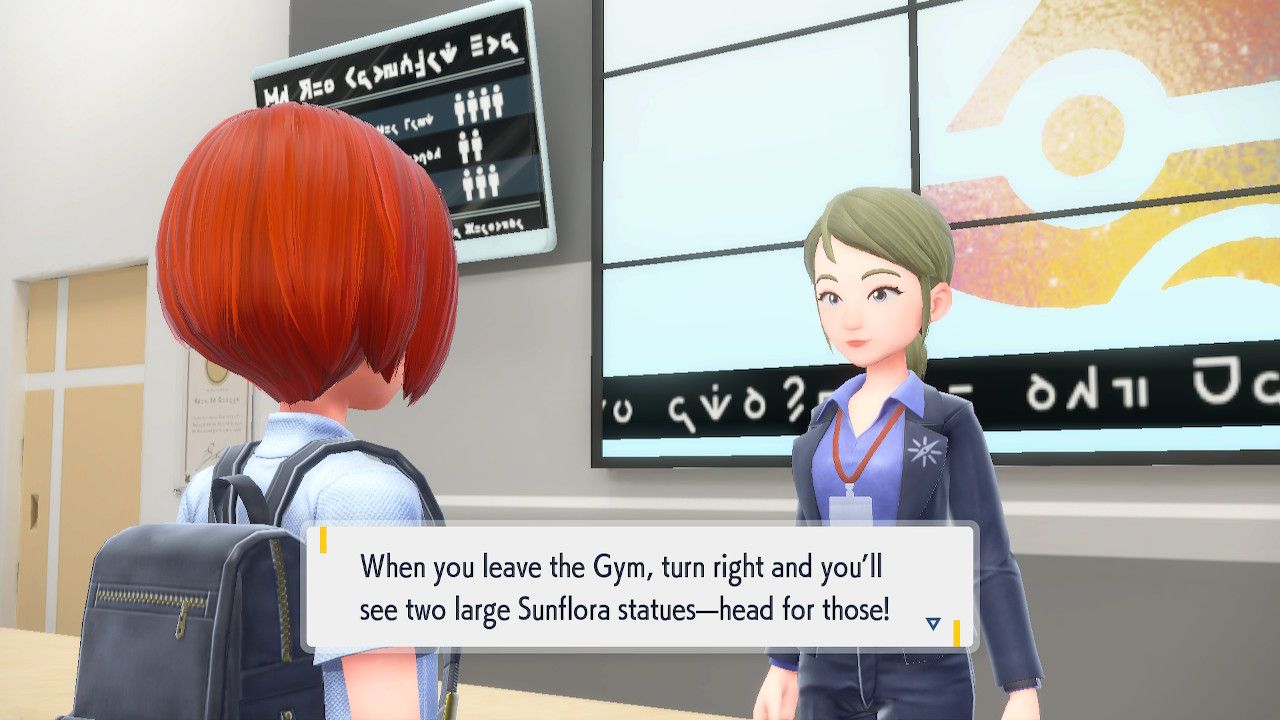 Exit the Gym and take a quick right, where you'll find someone just outside the farm pen with the customary gold text indicating they have something important to tell you. And so they do; it's time to find ourselves some scattered Sunkern. 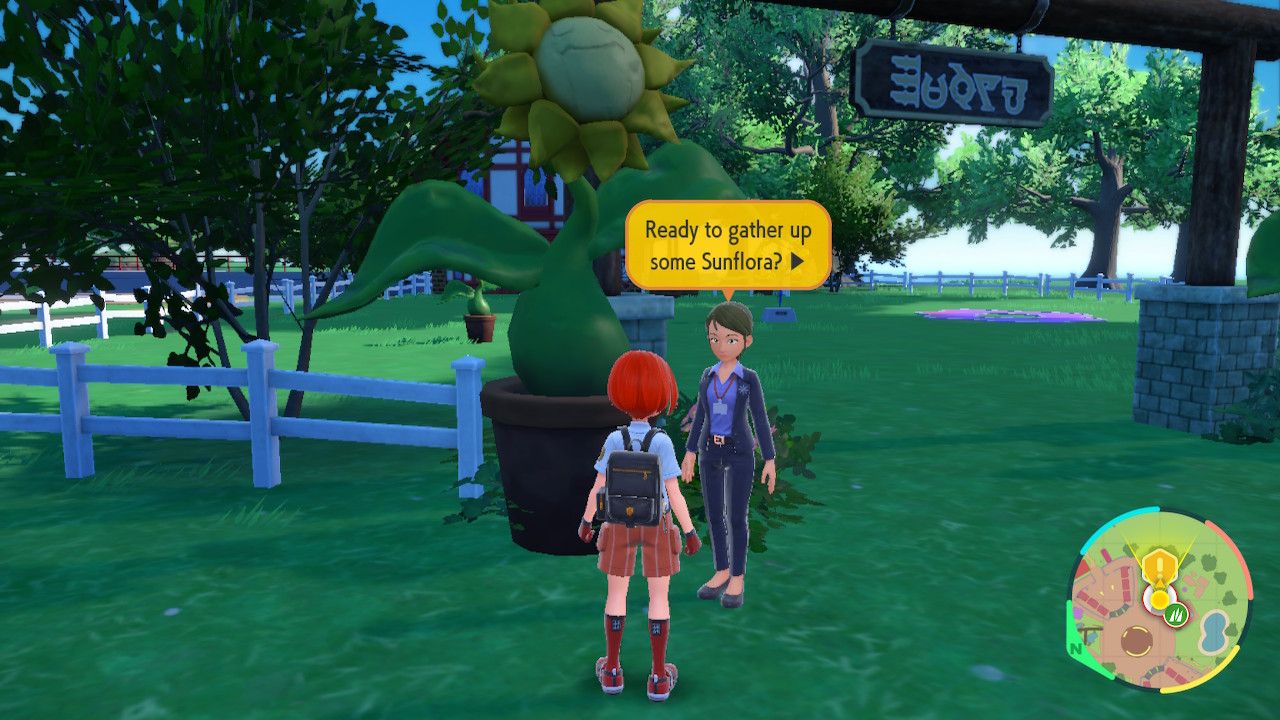 Your first three are directly behind you at the start of the test. Weird, but we'll take it. Thanks, Game Freak. 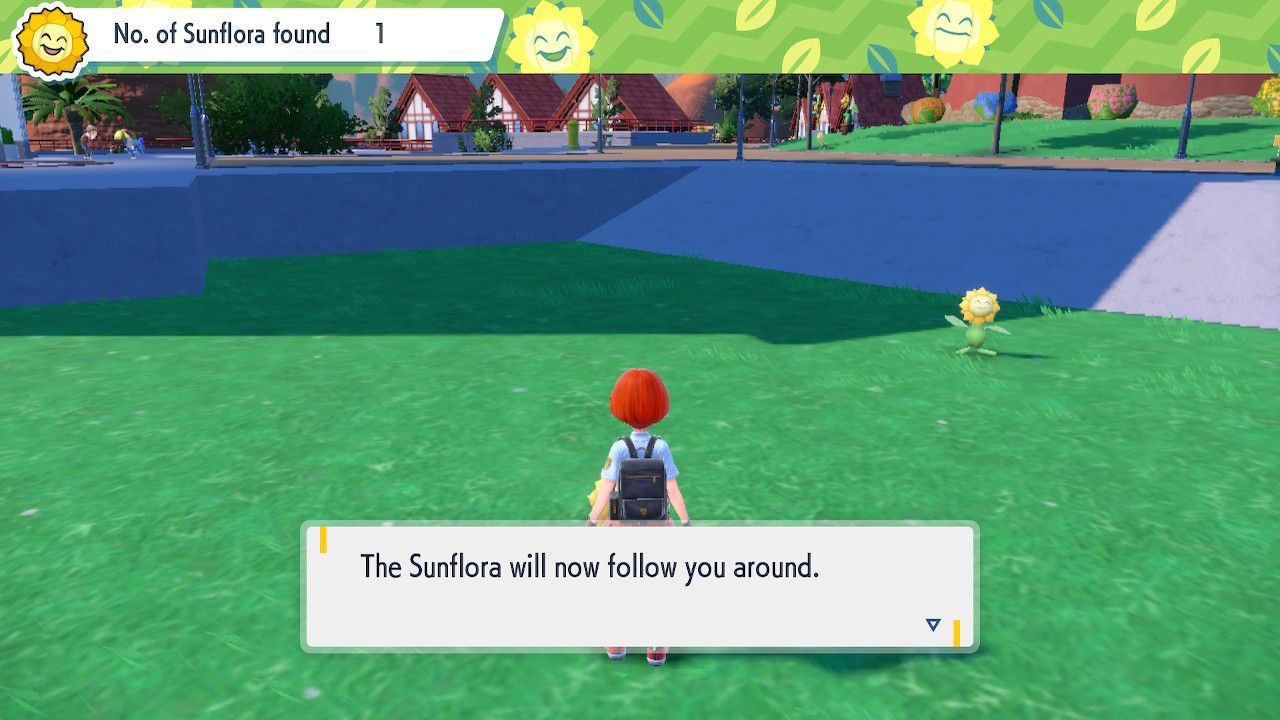 The fourth one's underneath the playground equipment to the right of the pen. Note that we ran into a bit of an issue here when we climbed up to the equipment itself — the three starter Sunkern all ran off, and only the new one followed. If that happens, just head back to the pen to collect them, but there's no reason to head up there, anyway; as we quickly learned, no more Sunkern are in this area. 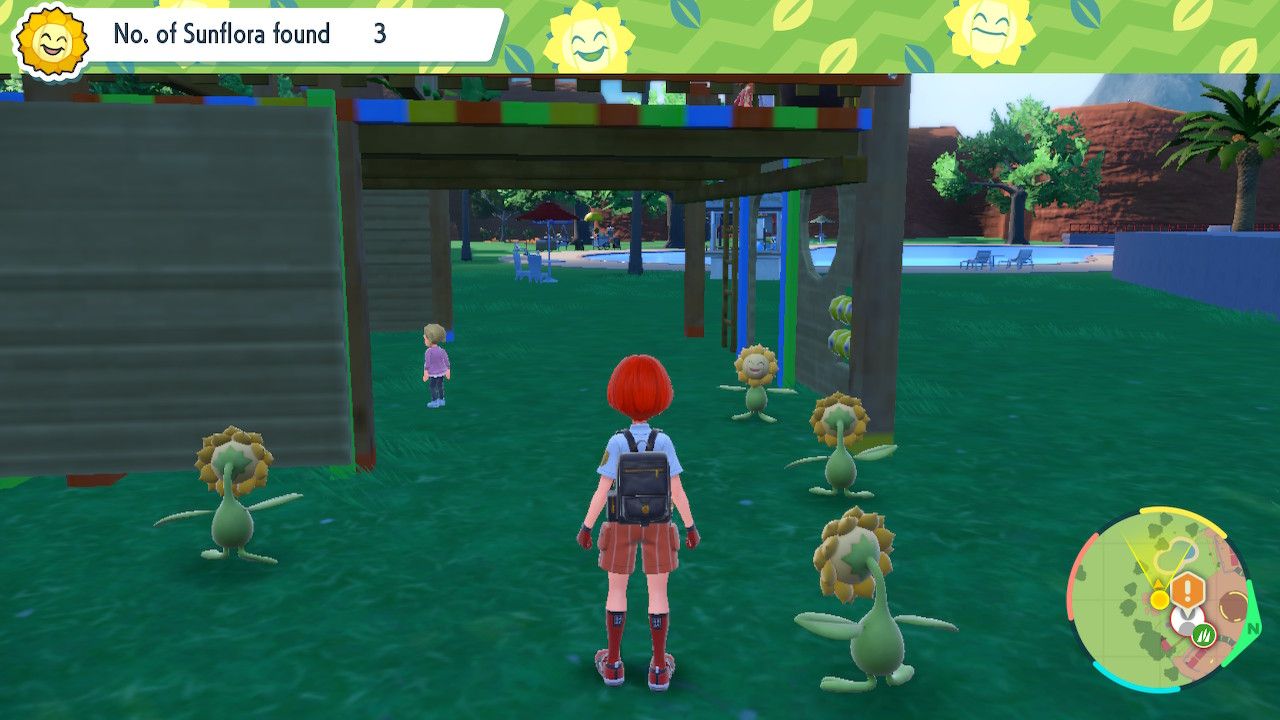 The fifth is to the left of the pen, across the white picket fence from the farm building. 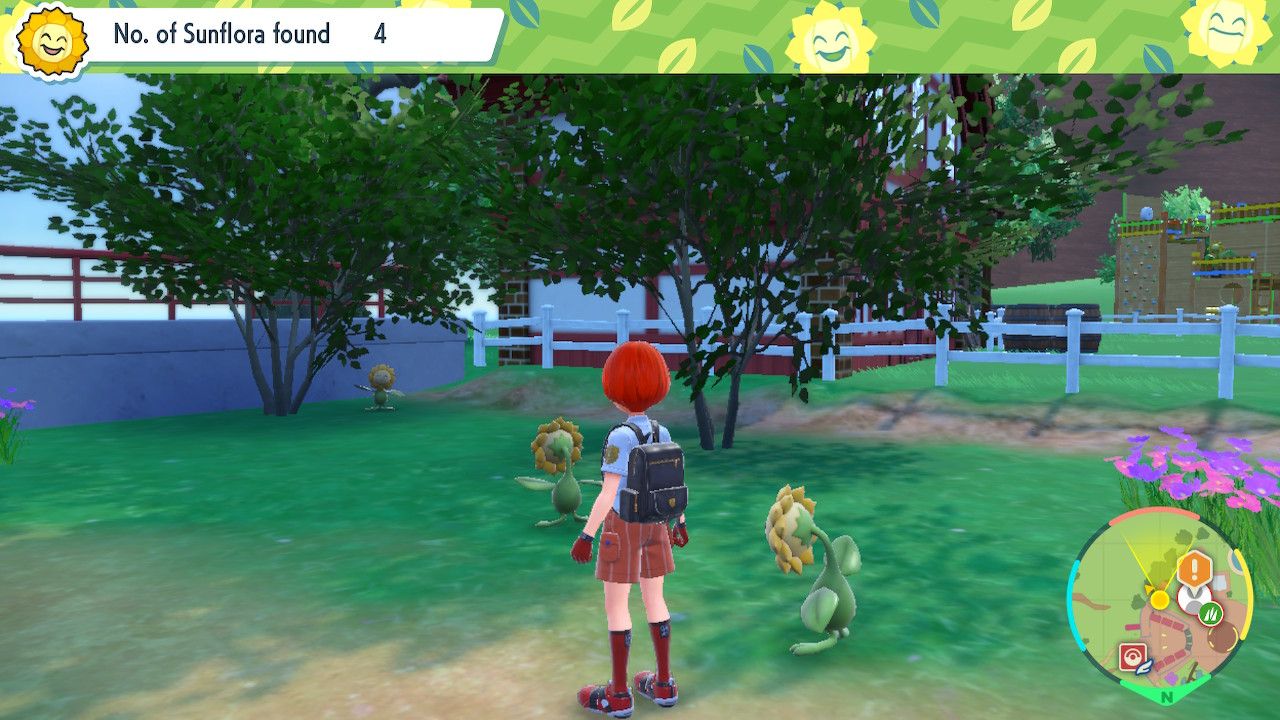 Sunkern six is on the ground level beneath the windmill. Before you climb the set of stairs, check nearby for this guy. 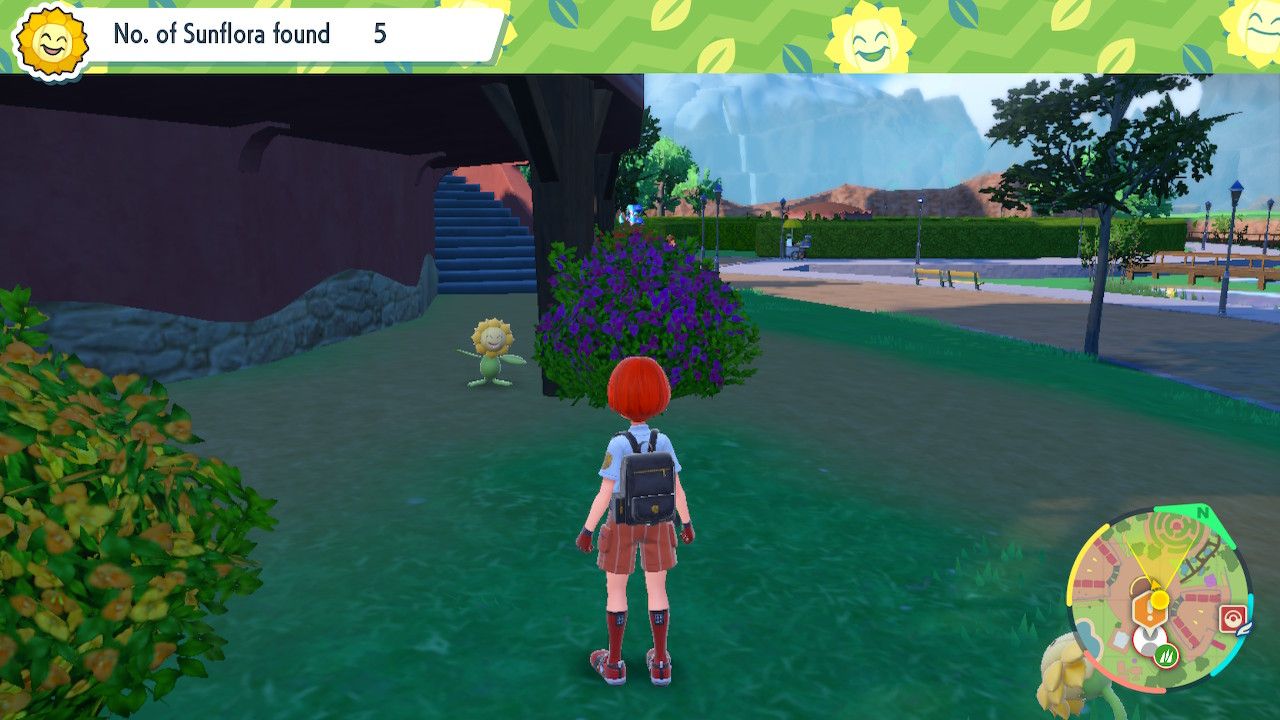 Now climb the stairs alongside the windmill to reach the spot you'll soon be battling Brassius. This rascal wants a fight, too. Bring him down, and he'll acquiesce to your flower-wrangling antics. 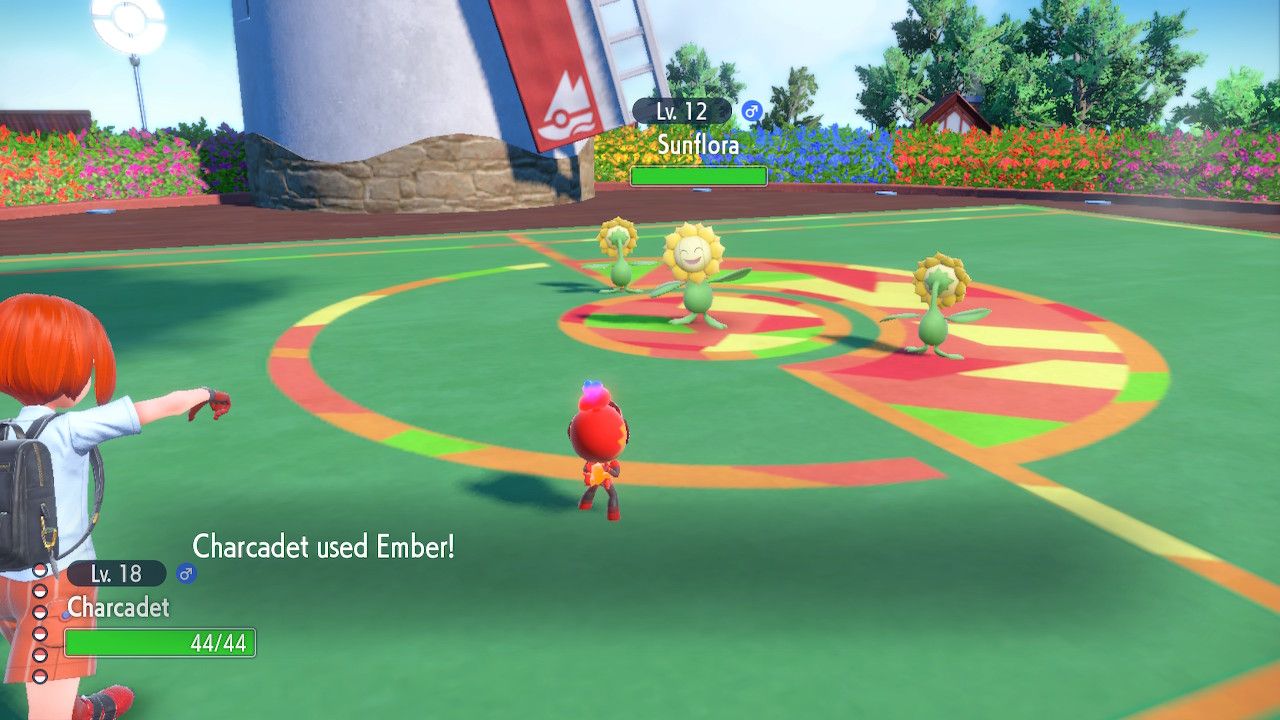 The eighth is by the big pool, on the side facing the rest of the town (rather than the far side, which faces the mountains). 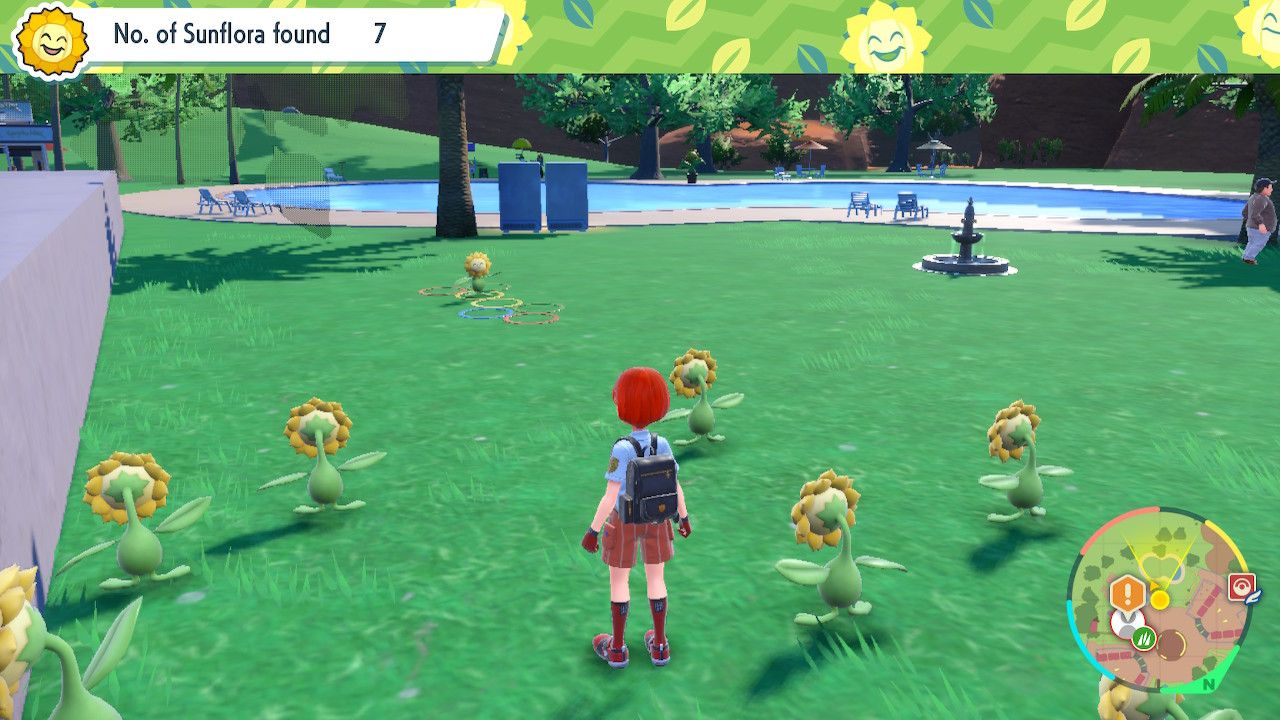 Number nine's up the short staircase near the Seabreeze Cafe in the town square area. If you're headed here from the eighth one at the pool, take the street path from the pool leading back into town. 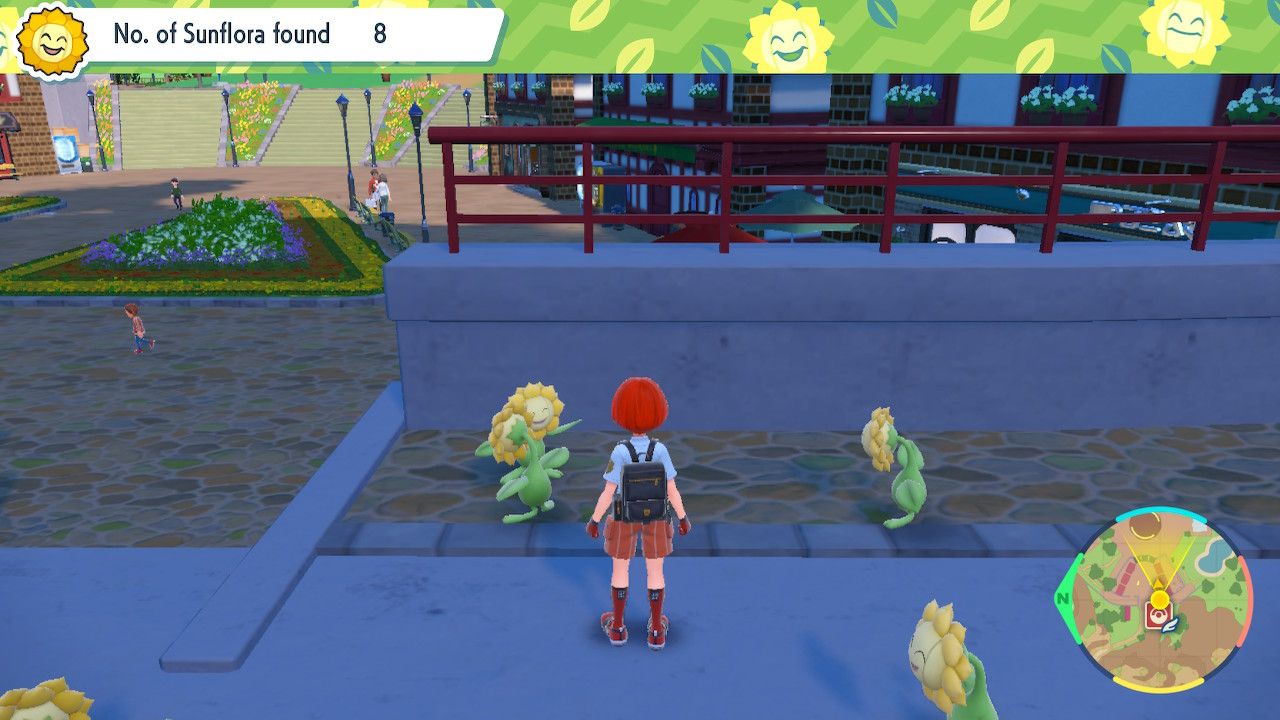 The final Sunkern's smack dab at the center of Artazon's town square. Not only will you need to chase it down, but it will echo its pal's sentiment and challenge you to a fight once you do. It moves fairly slowly, and wraps around the town square rather than venturing elsewhere, so you won't have much trouble. 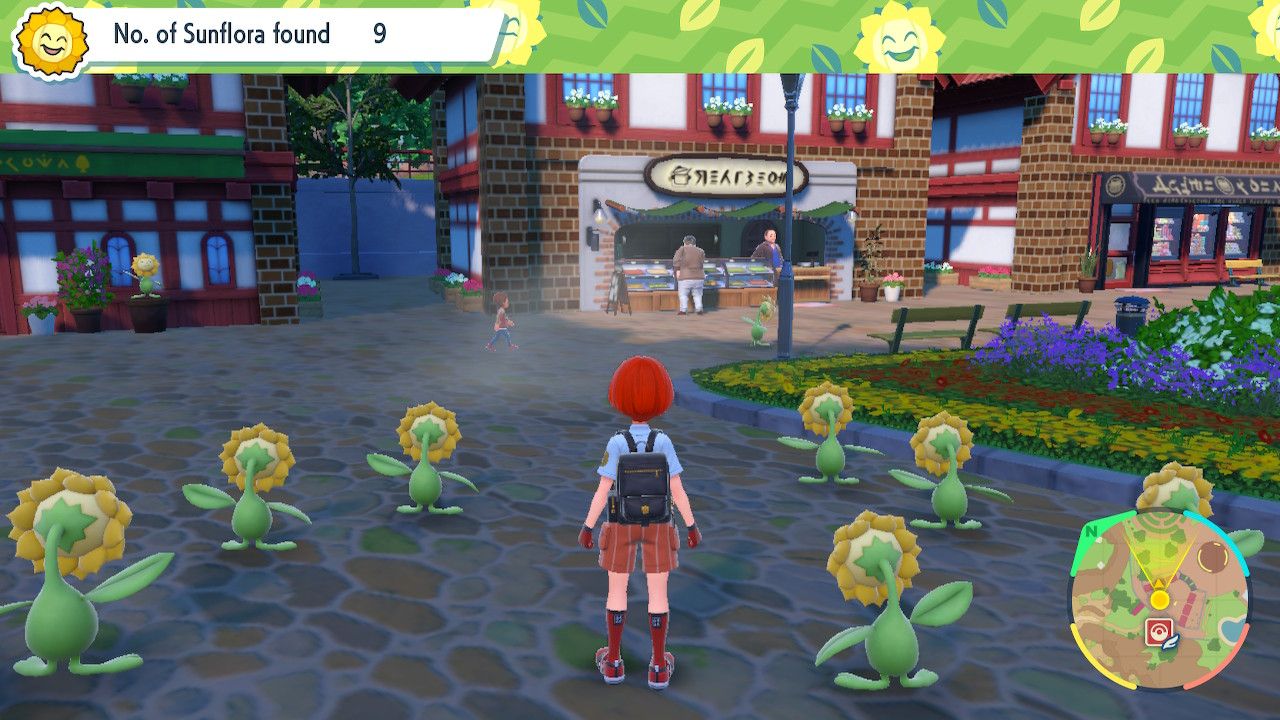 Now guide these ten troublemakers to the pen, head back to the Gym, and let the receptionist know you're ready to battle Brassius. (Heal up first if you've not yet done so!) 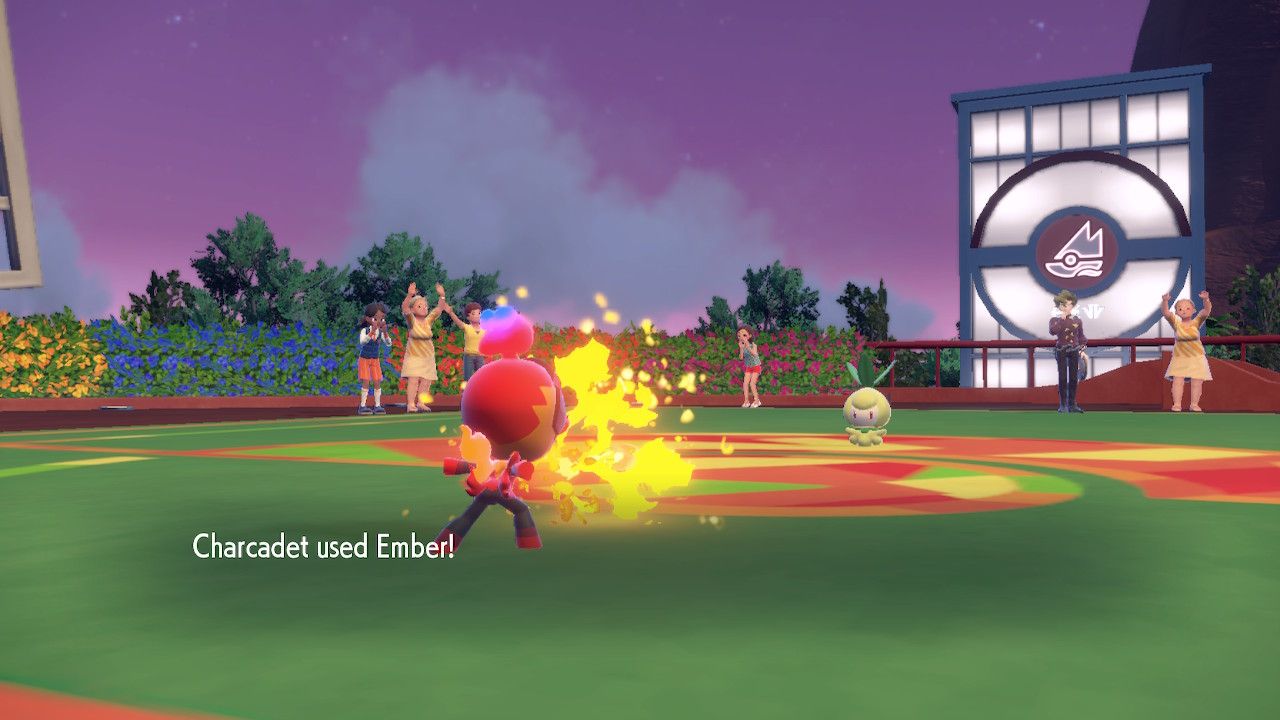 As Scarlet & Violet's Grass-type Gym Leader, you can mostly guess what to expect from Brassius. His first two Pokemon are predictably fully Grass-type, though he can potentially trick players who lack a firm grasp of the Terastal Phenomenon when he Terastallizes his ace, Sudowoodo. There's actually a heavy hint here when Brassius dubs his final Pokemon 'Truleewoodo'.

Sudowoodo is, in normal circumstances, a Rock-type Pokemon masquerading as a Grass-type. Hence, the whole 'pseudo' thing. Brassius' Terastallized Sudowoodo has a Tera Type of Grass, which means it is, in fact, actually a Grass-type. As such, the simplest path to victory is to maintain the pressure with the same Pokemon you use for Petilil and Smoliv — Fire, Ice, Bug, Flying, and Poison.

One thing Tera Sudowoodo has going for it is that it maintains the normal version's Rock-type attacks, which can spell doom for four out of its five type weaknesses, as they're all weak to Rock. Thus, Poison-type Pokemon or Pokemon with Poison as one of their dual types are your ideal-scenario choice here. 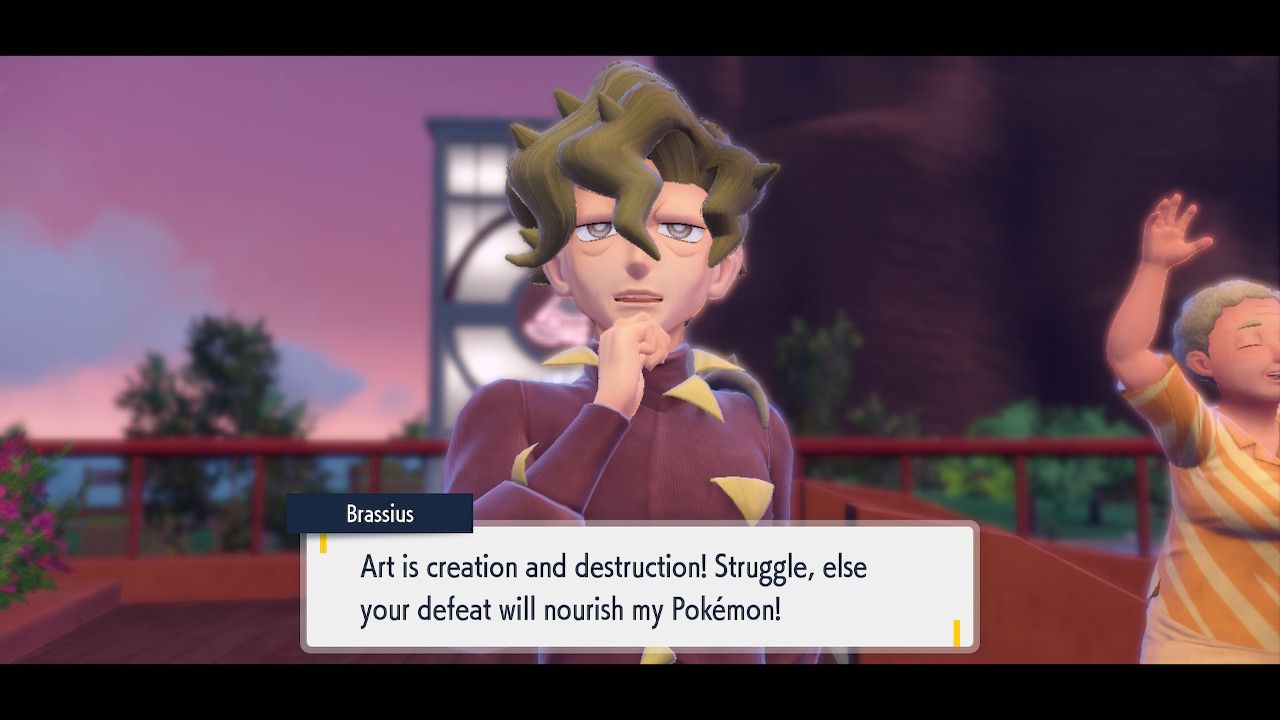 If you chose Fuecoco as your partner at the start of Pokemon Scarlet & Violet, it's a perfect match for both Petilil and Smoliv. If it happens to have evolved into Crocalor by hitting level 16 before the fight, it may even be just bulky enough to endure Tera Sudowoodo's Rock-type attacks, too.

Nearby replacements include Charcadet, Litleo, Growlithe, and Squawkabilly. If you bring a combination of these with you, Brassius should be easy enough for you to brute-force your way with attacks his team can't withstand. If you snagged Tera Type Flying Pikachu from the early purchase bonus, Terastallize it, and Sudowoodo will be pretty much powerless.