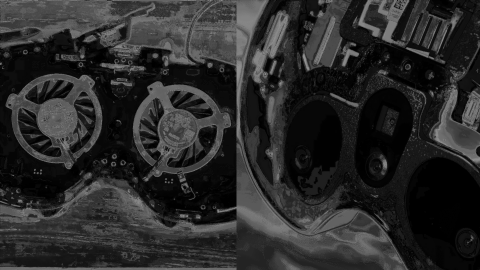 iFixit’s Quest Pro teardown reveals 2 cooling fans and an empty slot where the depth sensor would have been.

Before Quest Pro was formally launched at Connect it was known as “Project Cambria”. Meta CEO Mark Zuckerberg told Protocol in May Cambria will “ship later this year” with an IR projector for active depth sensing. When referring to Quest 2’s camera-based depth reconstruction he said “it’s kind of just hacked”, going on to say “on Cambria, we actually have a depth sensor”. Hardware-level depth sensing is also “more optimized towards hands”,  he said.

When I first tried Quest Pro I noticed there was no depth sensor in the position the leaked schematics suggested it should be. Meta confirmed Quest Pro doesn’t have a depth sensor, saying “Quest Pro uses forward-facing cameras” and claiming “Mark was referring to a different depth sensing system included in a previous prototype version of the device”.

CTO Andrew Bosworth said Meta “ultimately decided it wasn’t adding enough for the cost, the weight that it added and removing it allowed us to be a little bit more clever in how we use the existing sensors that we had”.

The teardown also shows two large cooling fans directly behind each of the headset’s LCD panels. Quest Pro features local dimming via over 500 mini LED backlights, which generates much more heat than traditional backlighting. It also has a more power-hungry processor with more RAM and more than twice the number of sensors as Quest 2, all of which generate heat.

Looking back at an iFixit Quest 2 teardown, each of Quest Pro’s fans looks larger than its single fan:

We recommend watching the full iFixit teardown to learn more about the intricate engineering behind Meta’s most feature-packed headset yet.