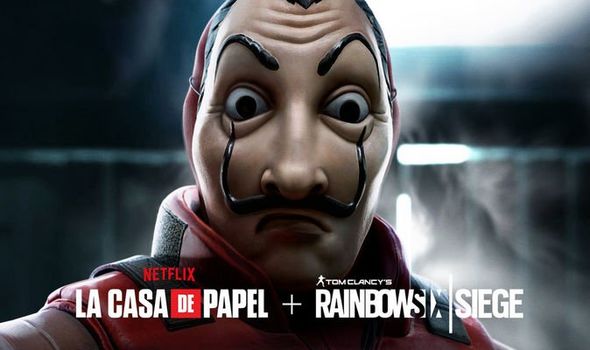 Ubisoft is celebrating the launch of their latest Rainbow Six Siege event with a free weekend for PS4, Xbox One and PC gamers.

This is the first R6 collaboration with Netflix and is available to enjoy over the coming days.

Ubisoft says that the new Rainbow Six event will be playable until Monday, November 25, although times may vary depending on regions.

“There’s a situation going on at the Bank. A hostage was taken, and it’s up to you to ensure their safety,” a message from Ubisoft explains.

“The heist is ongoing, and the tension is coming to a head.

“For Rainbow Six: Siege’s first collaboration with Netflix, we are bringing you a short event themed after their Spanish-language series, Money Heist.”

The launch of the new event also brings new cosmetic items and bundles to the game on PS4, Xbox One and PC.

“A full set of four items for both Hibana and Vigil will become available for purchase in the shop during the event and will be there for approximately a year.

Meanwhile, the Money heist mode is available to play right now and will probably feel familiar to R6 gamers.

Money Heist is based on the classic Hostage match, where Attackers and Defenders must fight over a Hostage dressed in the series’ iconic mask and red jumpsuit.

As an added bonus, Hibana and Vigil are also equipped with the same look, should you pick them to play with.

The new event coincides with the launch of the game’s next free weekend on all major platforms.

Gamers who don’t own Rainbow Six Siege on PS4, Xbox One or PC will be able to download for free this weekend.

The trial will run until late on Sunday, November 24, and will include access to all of the maps, modes and Operators present in the full version.

It’s the perfect time to test out the hit shooter, even if you will be facing some a player base of pros.

The Free Weekend kicks off tomorrow, November 21, and will launch at different times, depending on what platform you’re using.

The times are as follows:

The good news is that anyone who wants to be ready to jump into the action can preload the free access now.

This has been available since November 19, while the game will be available to buy at a discount during the trial period.