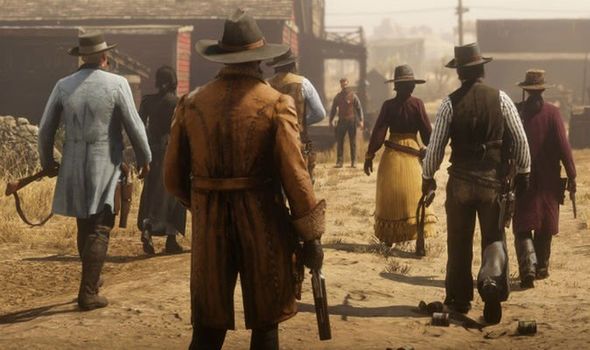 Red Dead Redemption 2 Online updates did land during E3 2019, but they weren’t the big ones fans were waiting for on PS4 and Xbox One.

Instead, Rockstar Games continued their plan of drip-feeding multiplayer content ahead of the next big Red Dead Online expansion.

This included launching a new Showdown Mode this week, as well as offering a big XP boost to fans.

Sport of Kings challenges gamers to battle on horseback to secure the burning torch and ride through all your team’s signal fires to score.

The new Showdown Mode is for between four to eight players and offers an interesting mix of close combat with the Sawed-off Shotgun, and a rare single-shot Dynamite Bow pickup for long range battles.

There is also plenty of new cosmetic items to check and new ways to earn care packages.

Players who are at least Rank 10 will be getting Bait and special Arrows, like the Poison Arrow, as part of a special Care Package bundle.

It’s even better for those who have reached Rank 20, and those cowpokes will be enjoying an additional package, including Provisions and Big Game Meats, some of which offer top bonuses and boosts.

It’s great to see all this new content but none of it is as exciting as a brand new Summer expansion pack for Red Dead Online.

This has already been announced by Rockstar Games but yet to be given a solid release date.

But we may be hearing more about it very soon, following the reveal that GTA 5 Online is getting a big Casino expansion later this month.

Before Red Dead 2 launched, the development team revealed that they would not be releasing content for both games at the same time.

It was suggested that one game expansion would be followed by another for the other game, meaning that the Summer DLC for Red Dead Online could be launched in July.

But unless something has gone wrong with their latest content pack, we can probably expect some kind of announcement next month.

The Spring DLC released by Rockstar helped fix a lot of issues with Red Dead Online but it needs to be followed by more patches.

The dev team can’t afford to stand still and let gamers get bored with what they’ve been playing for the past weeks.

So a launch in mid to late July would give Rockstar enough cushion to proceed into the coming months with new plans.

This is just a prediction for now and may be proven wrong if the development team have different plans for Red Dead Redemption 2.

Hopes of new story DLC are starting to fade, even though there’s a huge market for it and would probably sell well.

It’s unclear if Rockstar will have the resources to do such a thing but there are still high hopes of a PC port being released.

This may not happen in 2019 but It was earlier this month that the CEO of Take-Two Interactive – the parent company of Rockstar – shared more comments on a PC port.

A new company briefing in June featured a question regarding the release of Red Dead 2 on PC being a “layup” for Take-Two.

An easy shot for the company to score, with a game that’s multiplayer mode is getting stronger with each new expansion.

CEO Straus Zelnick responded by saying that “There is no downside to releasing the game on PC.”

Fans will be hoping to learn more from Rockstar Games in the months ahead, perhaps after the Summer DLC has been released.