As a format that uses almost any card from Magic The Gathering's 30-year history, it's easy to accidentally break Commander. It's happened numerous times, whether that be Hullbreacher in Commander Legends or Lutri the Spellchaser in Ikoria: Lair of Behemoths.

With the upcoming set Streets of New Capenna, the Commander community insists that the latest card to 'completely ruin the format' is going to be Lord Xander, the Collector. As the head of the art-collecting assassins known as the Maestros, Xander is a big, scary, and honestly, incredibly hot demon vampire that almost every Commander is now convinced is losing their collective shit over. Except, for all the step-on-me energy Xander radiates, it's unlikely he will be the oppressive ban-in-waiting the community is predicting. 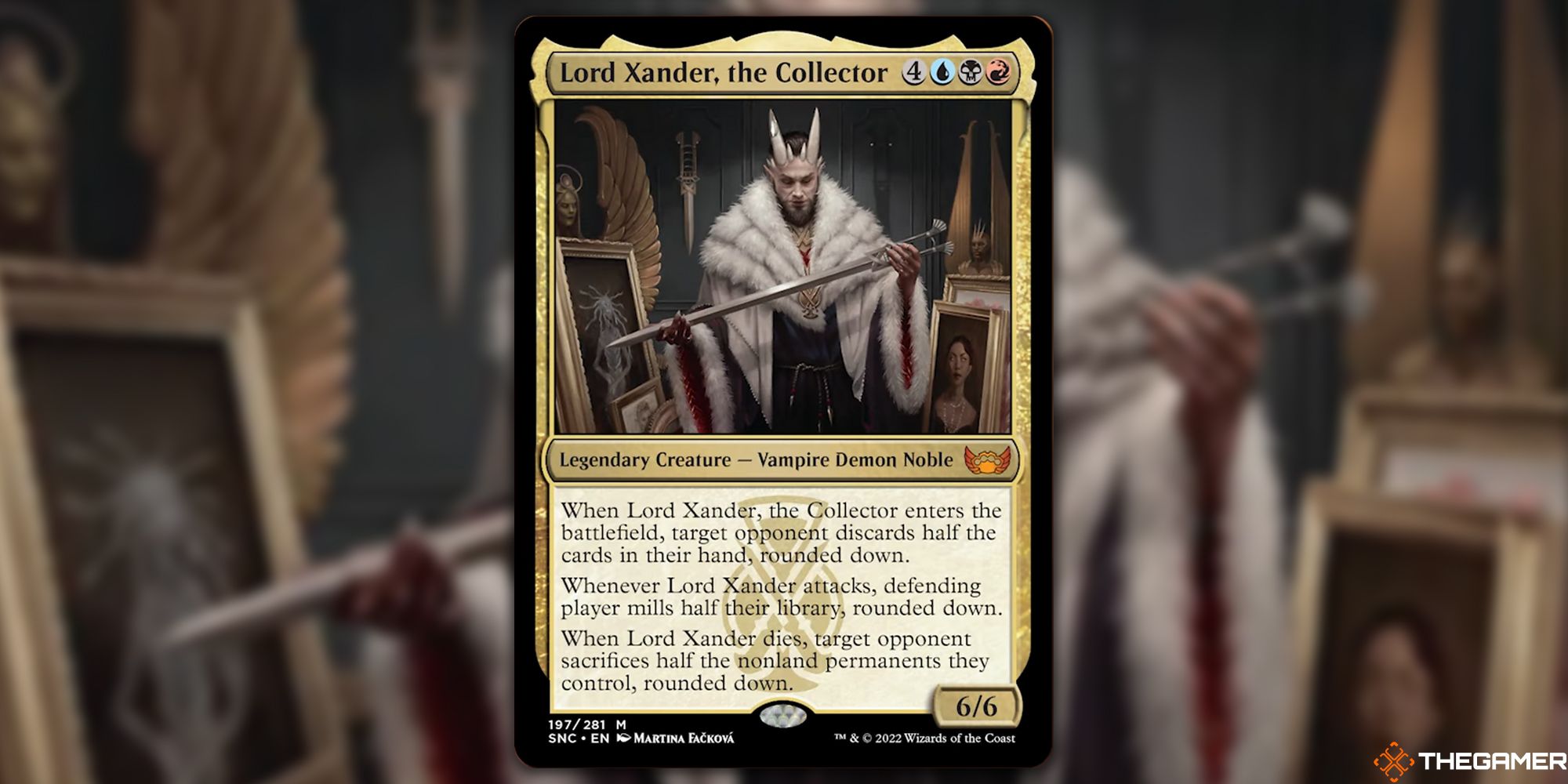 To be clear, Xander is absolutely a scary card. All three of his abilities are triggered, which can be hard for a lot of decks to counter, and he will absolutely impact the game the second he hits the battlefield. Everything from Mill decks to Graveyard to Aristocrats decks will love him, and he is certainly one of the strongest Commanders we've had in a while. But is he ban-worthy, as the Commander community is claiming? Probably not. Many players are missing Xander's big weaknesses that potentially push him out of the range of problematic Commanders like Golos, Tireless Pilgrim or Leovold, Emissary of Trest.

Xander is expensive as hell. Costing four generic mana, one blue, one black, and one red, he is way on the far end of mana values for Commanders. Seven mana is doable – some of the format's most-loved Commanders cost it or more, like Koma, Cosmos Serpent; Elesh Norn, Grand Cenobite; or Akroma, Angel of Fury. But seven mana where three of them must be different colours is a lot different, and only a handful of other Commanders who ask for so much mana in different colours are actually played in the format to any extent. 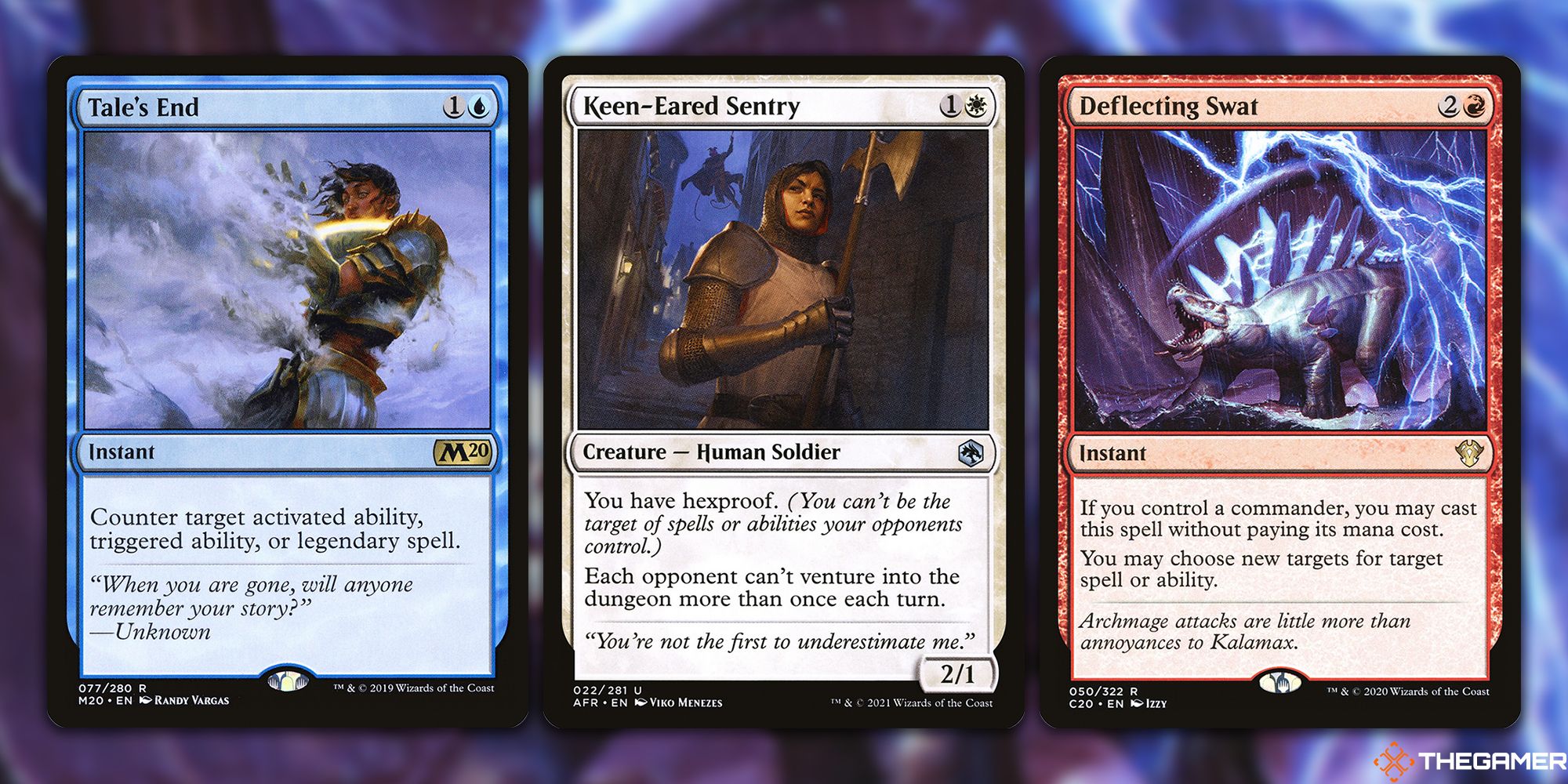 More important than the raw mana cost is the time it gives your opponents to prepare. Unlike the rest of your deck, you can't hide your Commander, and so your opponents know from the outset that if they let you get to seven mana you'll be casting Lord Xander, and the game will suddenly tip heavily into your favour. You're a slow, looming threat that players will want to take out pre-emptively. And with three other players at the table, someone is going to have a counterspell, or stifle, or at least some kind of protection for themselves.

The second problem is Xander looks a lot scarier than he actually is. His abilities only impact one player at a time, and two of them can be stopped with a simple Aegis of the Gods, Witchbane Orb, or Keen-Eared Sentry. Attacking an opponent to make them mill half their library is the worst of the three triggered abilities, but to do that, you generally need to put Xander directly in harm's way.

There's also a huge chance for Xander to backfire. Graveyard decks would love to mill half of their library, and any Aristocrats player would gladly sacrifice half of their permanents to stack up those death triggers. Even the humble creature token players won't mind too badly, as you're unlikely to be throwing Xander at their wall of blockers. And what if someone has Deflecting Swat, a red Commander staple that redirects an ability?

Of course, there are ways to build Xander which would make him an oppressive nightmare, but you can say that for virtually any card. Commanders can be built in a near-infinite number of ways, but we don't look at weak ones like Kwain, Itinerant Meddler and ban him because cards like Pemmin's Aura and Smothering Tithe exist.

The problem with Xander isn't Xander himself, it's the card that has been a consistent problem for months that everyone thought of as soon as he was announced: Tergrid, God of Fright. Introduced in Kaldheim, Tergrid is a mono-black creature that allows you to gain control of any permanent an opponent discards or sacrifices. On her own, she is a nightmare, but Xander can turbo-charge her in a big way. Maybe he will be the thing that finally persuades the Commander Rules Committee to step in and ban Tergrid, but that doesn't inherently mean Xander is also going to be a problem.

It's easy when a big, new, splashy Commander comes along to think "this is it, this is the one that breaks the format", and Xander certainly comes close. It is reasonable not to be thrilled to play against him, and speaking up during your Commander game's rule zero discussion is a central part of the format. But to go as far as to say he should be outright banned is one hell of a leap the community is making when he isn't anywhere near as good as people think he is. Just let me play my slow, hot, demon bastard man.