Cooking up recipes is far more important in Resident Evil 8 Village than you might expect. Resident Evil games may have had you combining herbs for a quick health boost in the past, and Resident Evil 4 had you gathering fish and eggs, but cooking up a hearty meal mid-way through the survival horror is a new feature in RE8, and it’s one you should make the most of.

Each meal that the Duke cooks up for Ethan Winters in RE8 Village will actually give Ethan a permanent stat boost of some kind, including buffing his overall health, or decreasing the damage he takes when guarding. All of the buffs are well worth it, and as long as you know where to get ingredients, you can cook every meal in the game fairly easily.

But there are three ingredients that are much tougher to find. Yes, there are three rare animals in RE8 Village, and these creatures provide the very best possible meat. In this guide we’ll be showing you where to find the White Pig, this creature will drop Quality Meat, and will allow you to cook up some rare dishes. Just read below for everything you need to know.

Where To Find Quality Meat In RE8 Village 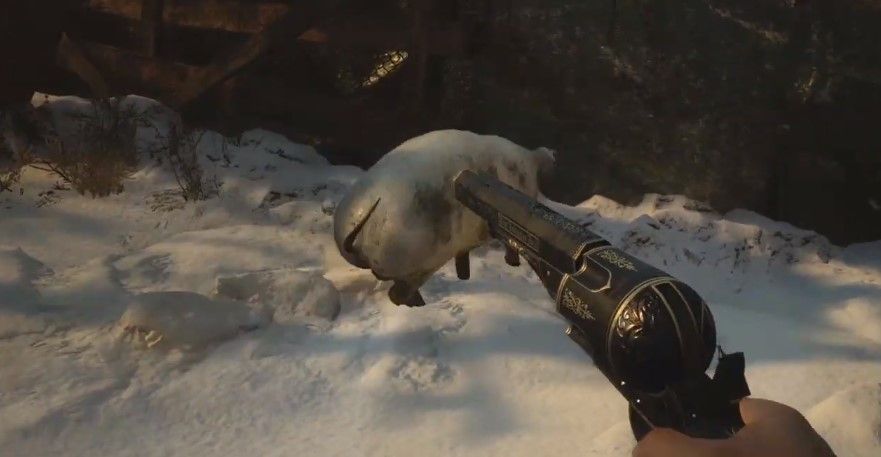 Even though you can find where the Quality Meat is located early on, you will not actually be able to have the White Pig spawn until later in the game. The best part of the game to find it, for my money, would be when you acquire the Well Wheel, as the White Pig spawns next to a well, and you can get both items in one swift move.

In order to find the White Pig, you should return to Luiza’s House after collecting the Well Wheel. Luiza’s House can be found from the East exit of the Church in the Village. Walk up through the tall grass, but be aware that new enemies will spawn here over the course of the game, so even if you’ve been through once before, you might be surprised. The first time you make your way through Lycans are roaming the area, later on those flying creatures will be here, and then finally near the end of the game a powerful lycan will spawn.

Once you fought your way back up to the house, turn to the right just before entering. There’s a small hut, and you go through the hut and climb out the window at the backside to find the well – in addition to the White Pig.

Now, pigs and goats aren’t too powerful or anything, but you might want to stay inside the house while shooting the pig. It’ll almost definitely attack back if you go in there intending the stab and slash away at the porker with your knife.

Once the White Pig is down, you get the Quality Meat, which you can finally use to cook up one of the Duke’s rarer and more precious recipes, giving Ethan Winters a permanent stat buff. Not bad at all.