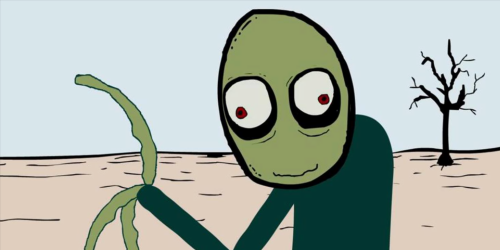 David Firth, a voice actor and the creator of Salad Fingers, has been wiped from Wikipedia after being deemed "not notable enough".

If the name Salad Fingers doesn't ring a bell for you, you need to jump on YouTube right now and take a look at one of the most creepy and influential YouTube series in the history of the site. The creator of the short, David Firth, also voices the titular character and has appeared in voice acting roles for games like GTA 5, as well as directing music videos, created two feature-length movies, and released music through established labels.

Despite the massive success of Salad Fingers and a range of other notable works, Wikipedia has deemed David Firth "not notable enough" and removed his page from the site. Searching David Firth on the site right now will have the site try to link you to an actor and a British statistician, with the link to David Firth now not appearing and instead pointing you to the Salad Fingers page.

The news was shared by David Firth himself, who posted a passionate rant about the topic on his Twitter account, saying, "Hey Wikipedia, I've been wiped from your pages. Deemed not notable enough. Despite having created one of the most popular web animations ever, directing music videos for famous artists, voice acting in hit TV series and games like GTA V, releasing music on an established label, 2 feature-length movies, and plenty of TV work while at the same time focusing 99% on my own creative domain, never thinking notability came from what media corporations I had worked for."

Firth continued, "I am just a single example of a much larger issue of independent grass-roots creatives who reject the notion that success is how many large companies you have worked for, being disregarded due to existing (by choice) mostly outside of this system. Because one of your specific guidelines for notoriety is that popularity and numbers are irrelevant if there aren't articles from "established sources" documenting the journey, which is basically saying that how much you have made an impact ON YOUR OWN doesn't matter."

Firth continued to Tweet about the subject, saying that it affects his livelihood as Wikipedia is tied into Google results, which he claims is the primary way his work is researched and that losing that page makes it harder for him as an independent artist. At the time of writing, Wikipedia hasn't reuploaded the page and hasn't commented on the situation.