Enterprise app configuration platform Salto today announced it has raised $42 million in series B funding, bringing its total raised to $69 million. The company says the funds will be used to expand its capacity while growing the size of its workforce.

Businesses rely on an increasing number of apps and services to support their operations, from customer relationship management and marketing to human resources and finance. According to one source, enterprises now use an average of 34 software-as-a-service apps, and 83% of company work will be done from the cloud by 2021. But the process of aligning a company’s app configurations with its business needs can be labor-intensive, time-consuming, and prone to error.

Salto automatically extracts the configuration elements of different business apps (like fields, flows, and processes) and translates them to a declarative language called Not Another Configuration Language (NaCl). Using NaCl with Git, a distributed version-control system for tracking changes in source code, companies can collaboratively edit and deploy app configurations back to live business apps or staging environments for testing.

“With Salto, users can maintain separate development and testing environments, each with its own configuration setup, while keeping configuration elements that should remain aligned between environments in a shared folder. This makes configuration across environments easy to compare and align,” a spokesperson told VentureBeat. “The use of tools such as a structured language, version controlling, and automation is already enabling the business operations teams Salto works with today to execute changes in a simple, reliable way; streamline processes; optimize accuracy; and save time and resources.”

Rami Tamir founded Salto with Benny Schnaider and Gil Hoffer in 2019 after their success with previous companies, including Pentacom (which Cisco acquired in 2000 for $118 million), Qumranet (acquired by Red Hat in 2008 for $107 million), and Ravello Systems (acquired by Oracle in 2016 for a reported $500 million). With Salto, the cofounders sought to build an open source project that could make different app configuration elements searchable, as well as monitoring, synchronizing, testing, tracking, and rolling back changes across apps from Salesforce, HubSpot, Marketo, and NetSuite.

“The Salto platform extracts the configurations of the different applications and translates them into a single declarative representation. Salto leverages NaCl to offer features such as text search, in-line documentation, references, and real-time feedback that enable users to better monitor … the context of changes made in their configurations, as well as analyze the potential impact of any planned change,” a spokesperson said. “A built-in Git client allows users to easily version, audit, and document changes; debug them; and even revert back to previous versions. When users are ready to apply a change, Salto’s engine calculates the differences between the current and future states of configuration — which are also represented in the form of visual graphs — and, taking into consideration all applicable dependencies, generates a plan of deployment.” 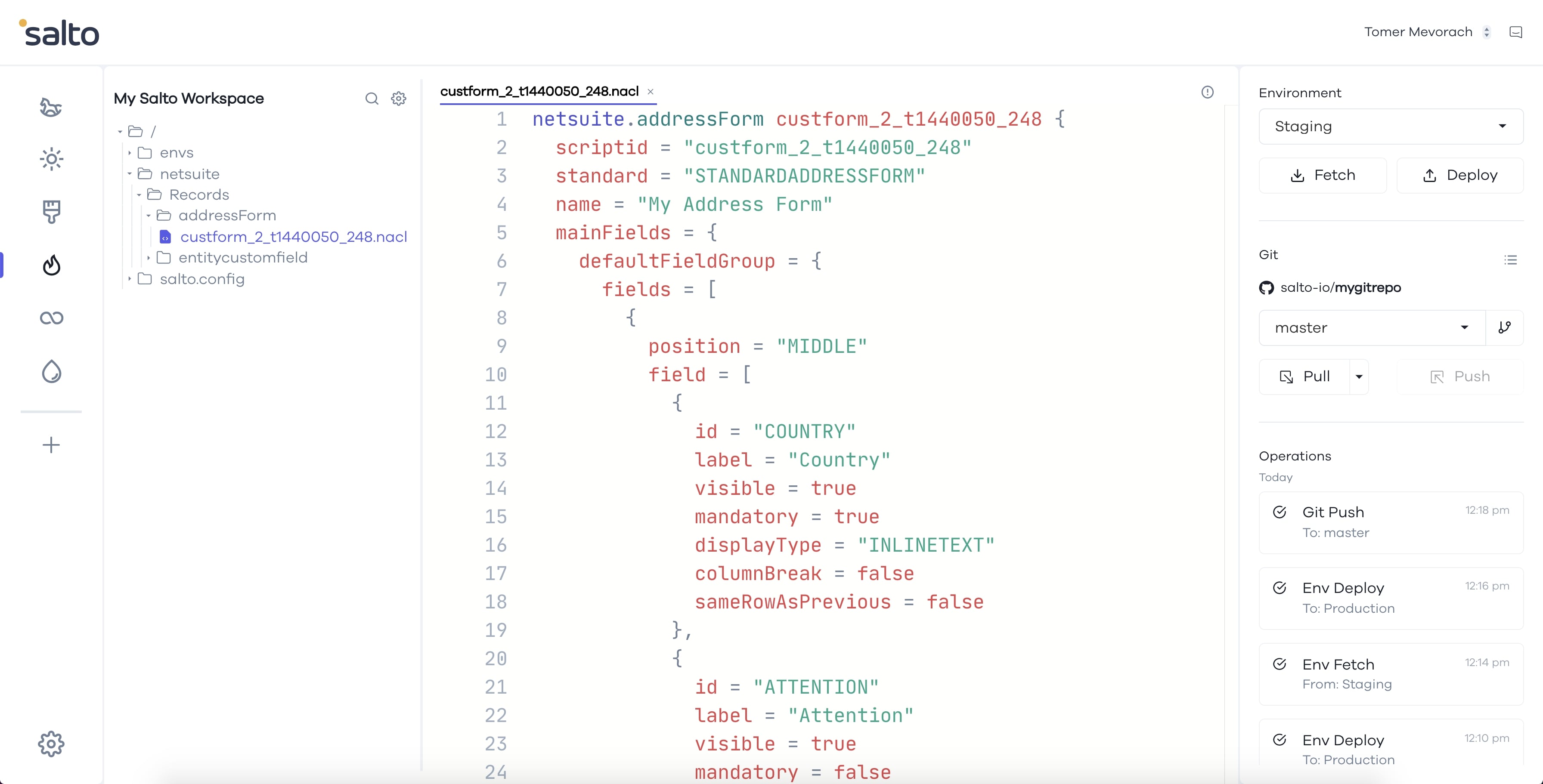 Salto customer StackPulse says the platform cut Salesforce and HubSpot update times by 75%. Salto plans to expand its support to a total of 10 apps by the end of 2021.

“Similar to what DevOps has done to automate software delivery, we want to leverage software engineering principles and tools to radically change how business applications are configured and managed today,” the spokesperson said. “We will build on the platform to continue providing insights into how all the systems are connected and work together and allow teams to untangle them, analyze and document changes, extend those changes across applications and environments, and enforce a process to make each department’s stack of software operate as a cohesive whole. We will expand our ecosystem of supported business applications, making it easier for business admins, developers, and architects to simplify SaaS by automatically updating and analyzing multiple apps at once, with full trackability and auditability.”

Accel led the funding round in San Francisco- and Tel Aviv-based Salto, with participation from Salesforce Ventures, Bessemer Venture Partners, and Lightspeed Venture Partners. The company, which has 35 employees, closed an earlier $27 million round in October 2020.