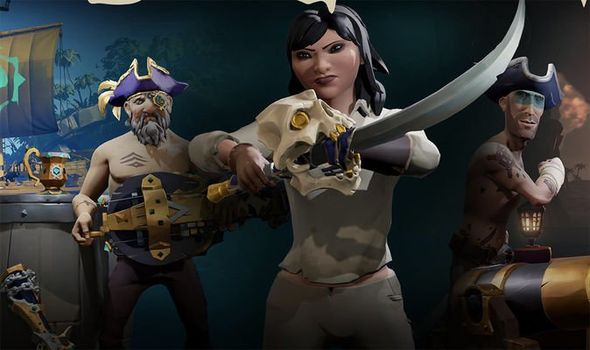 The Sea of Thieves Anniversary update patch notes have been revealed for Xbox One.

The only downside is that the game has been taken offline for server maintenance.

And the server downtime has been extended to 6pm in the UK, meaning fans face an extra long wait to get stuck in.

“Due to unforeseen circumstances with publishing the Anniversary Update, we’re extending the maintenance window to 6pm BST. Rest assured we’re working hard to get this momentous update live!”

But while fans wait for the game to come back online, developer Rare has released the full Anniversary update patch notes.

According to the patch notes, loading times have been improved, not to mention performance and stability.

• Xbox One S Improvements – Performance on the Xbox One S has been improved.

• Improved Loading Times – Time taken to initially load in to Sea of Thieves has been reduced.

• ‘Push to Talk’ functionality now works correctly on Xbox One when set up in Audio Settings.

• Chest of Sorrows no longer fills up a ship when placed on a docked Rowboat that is then detached from the ship.

• When fighting the Kraken, moving into a safe space while it attempts to snatch you up from the ship will no longer cause you to be pulled through the environment.

• If the game is unable to delete your pirate from the front end settings screen, it will no longer cause an infinite loading screen.

• It is no longer possible to interact with items while holding a chest.

• After undocking from a ship-based interactive item, you will now be able to correctly tap the quest radial or item radial to return to the previously wielded item.

• Resolved an edge case where a Closed Crew could become an Open Crew when the crew owner leaves.

• Resolved an issue preventing Xbox One players using a mouse from turning their camera.

• When using the pirate chat radial, closing the second page of the radial without selecting a message will no longer automatically send a message.

• Players with unlocked Commendations for previous Mercenary Voyages will once again see their Commendations in the Reputation pages.

• The Title counts on the Bilge Rats Reputation page will now correctly count the Titles available to players.

• During the new player onboarding tutorial, handing your tutorial chest to another player and having them cash it in for you will no longer leave tutorial messages stuck on-screen.

• Waterfall SFX at Plunder Valley no longer cut out.

• Fauna now renders at the correct level of detail when players are in close proximity.

• Shanties now play as expected when played during a server migration.

• The cannon next to the beacon on Devil’s Ridge can now be climbed into.

• The ship’s flag on the Ferry of the Damned is now correctly attached.

• There are no longer palm leaves stuck to the beach at Mermaid’s Hideaway.

• Players can no longer walk beneath the water on Crescent Isle.

• It no longer rains in the Pirate Legend Hideout at Plunder Outpost.

• It’s no longer possible to get stuck inside rocks at Thieves’ Haven.

• Players can no longer get stuck between the wharf and the tree at Plunder Outpost.

• It’s no longer possible to get stuck on rocks at Ancient Spire Outpost.