Of the many different weapons are found in Skyrim, the one-handed axe is among the most common and underrated. However, passing them up for the sword (or bow, looking at you stealth archery aficionados) is a mistake.

War axes are fun to use, they look great, and there’s no shortage of unique and powerful variants to be found across the breadth of Skyrim. We’ve compiled a selection of the best and most unique axes to be had for your perusal. 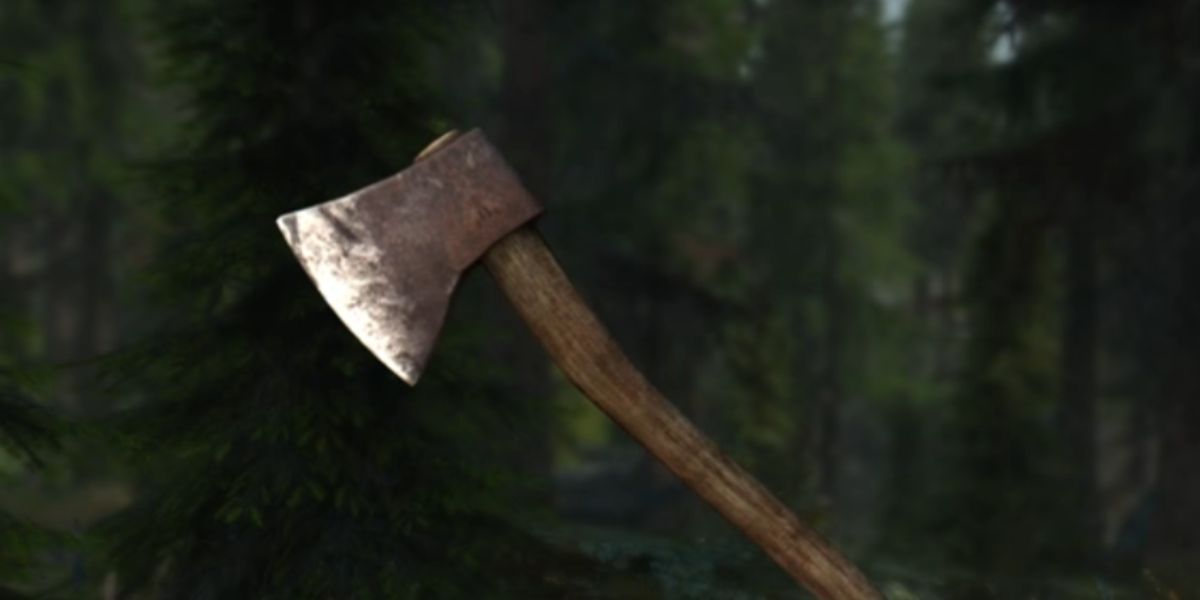 The Poacher’s Axe isn’t a particularly powerful weapon because it doesn’t deal a lot of base damage, and its enchantment isn’t very powerful compared to most of the other unique axes in Skyrim.

However, the Poacher’s Axe has one of the most unique enchantments in Skyrim — it deals 3 points of extra damage against all animals. Although the Poacher’s Axe definitely isn’t a viable weapon for the end game of Skyrim, it is worth using for beginners and it can be easily obtained at Halted Stream Camp. 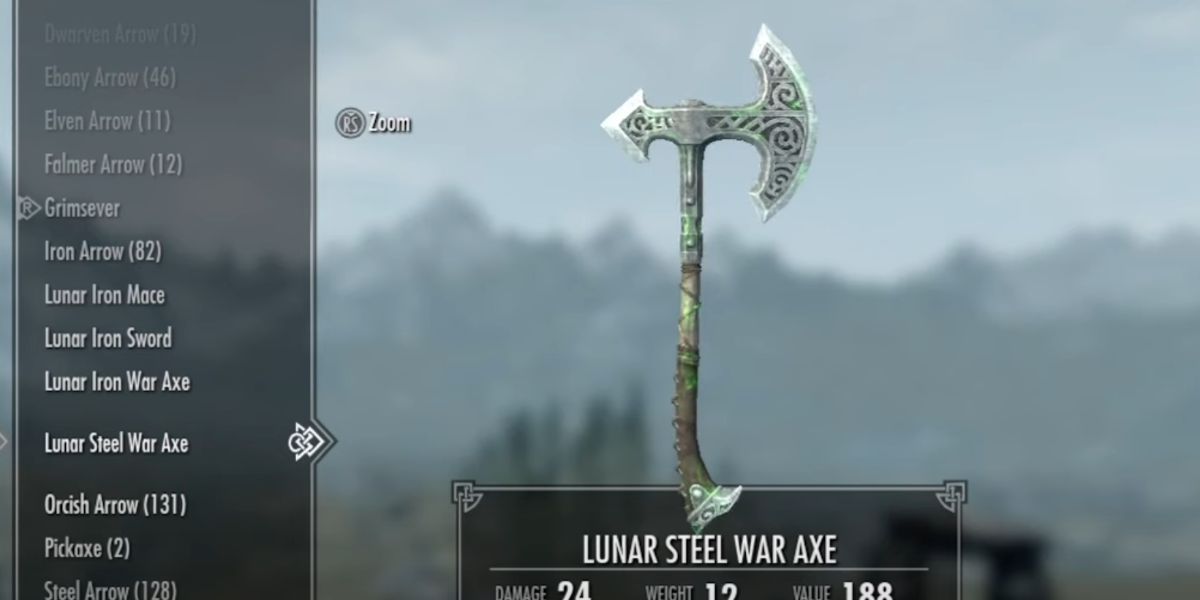 The Lunar Steel War Axe has the Lunar weapon enchantment, which deals 25 points of fire damage to enemies — but only during the night. This effect is great for vampire builds. 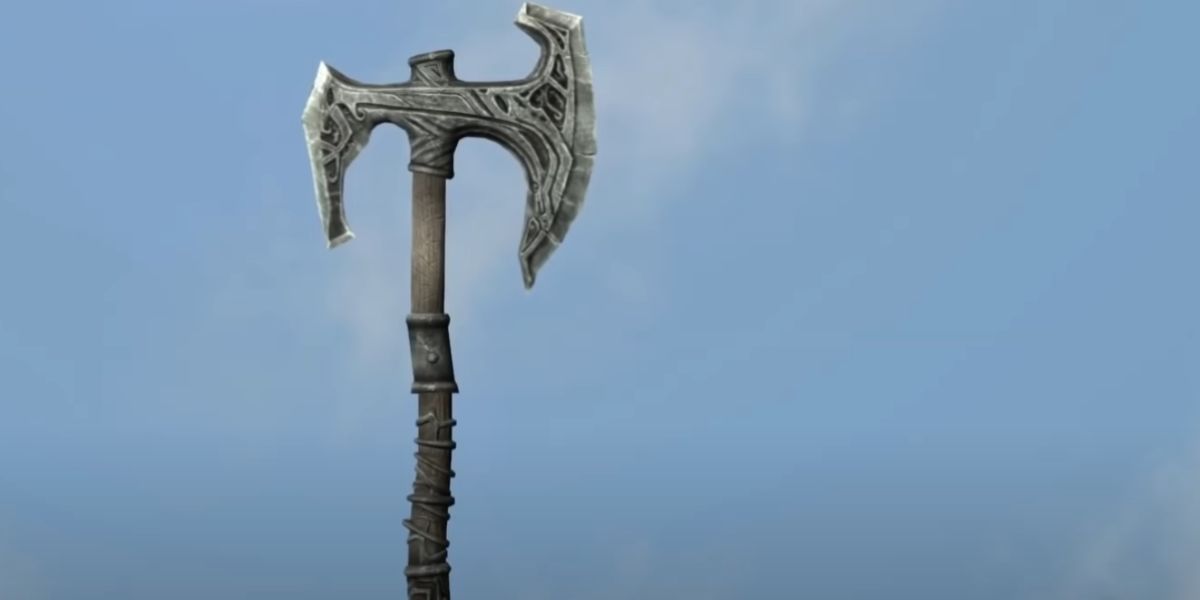 What truly sets the Nordic War Axe apart from other war axes is its distinct appearance, which looks very different from most of the axes that are found in the base game of Skyrim and the Dawnguard DLC. 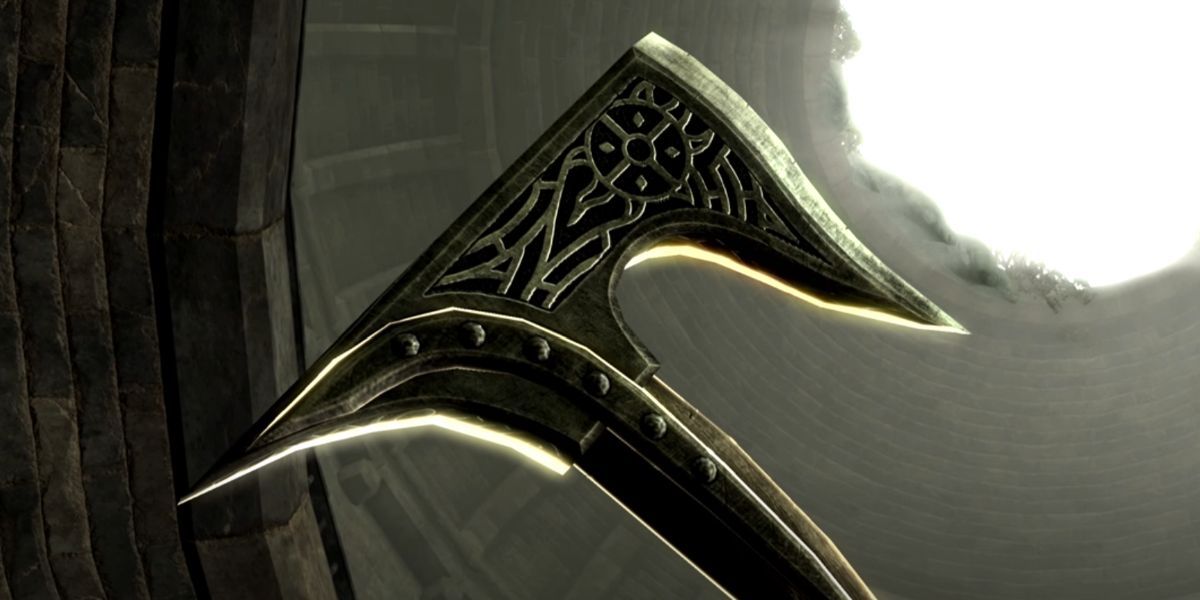 The Dawnguard War Axe is first encountered at Fort Dawnguard. However, many members of the Dawnguard faction wield this unique weapon as well. Although there are other war axes in Skyrim that deal more damage, this axe deals 5 extra points of damage against vampires.

The extra 5 points of damage don’t seem like much at first glance, but it is actually a major asset while fighting the vampiric enemies that are encountered in the Dawnguard DLC. 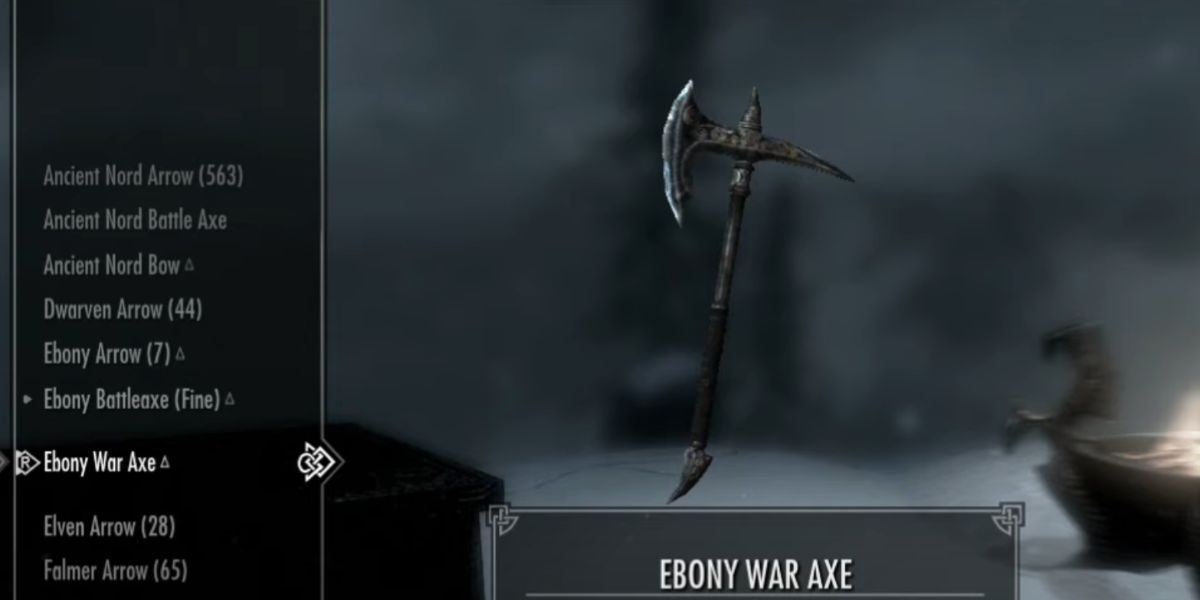 Ebony is one of the strongest ores found in Skyrim, and items forged from it are incredibly powerful. The Ebony War Axe can be obtained either by smithing it or by randomly encountering it as dungeon loot at higher levels.

The Ebony War Axe deals 15 base damage, and when paired with a powerful enchantment, can easily become a weapon that doesn’t leave the player’s hands for the majority of the game. 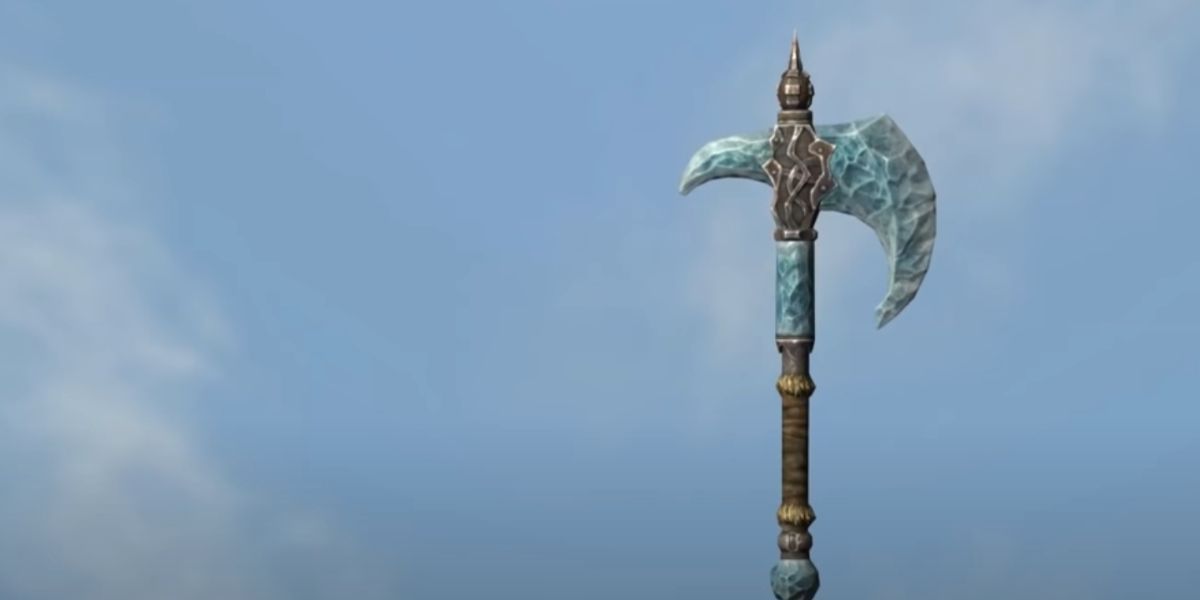 Stalhrim was added into the game with the Dragonborn DLC, and as such, it can only be obtained on the island of Solstheim. Players that want to obtain this weapon have to reach a high smithing level before it can be crafted. 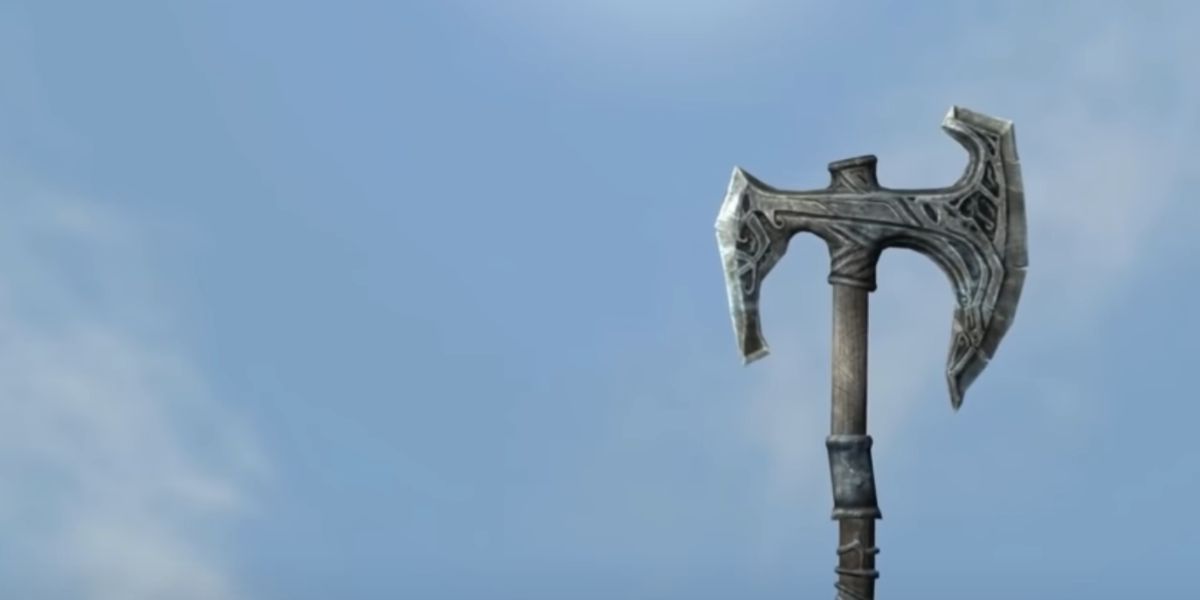 Okin is a unique variant of the Nord Hero War Axe, and it is found in the base game of Skyrim by traveling to the Ruins of Volunruud. Kvenel must be defeated before this axe can be acquired.

Although it may not be easy to obtain Okin, it is well worth it since this one-handed axe deals 10 extra points of frost damage against enemies — in terms of both health and stamina. Okin doesn’t have a unique appearance, which is one of its major downsides compared to other unique swords and axes in Skyrim. 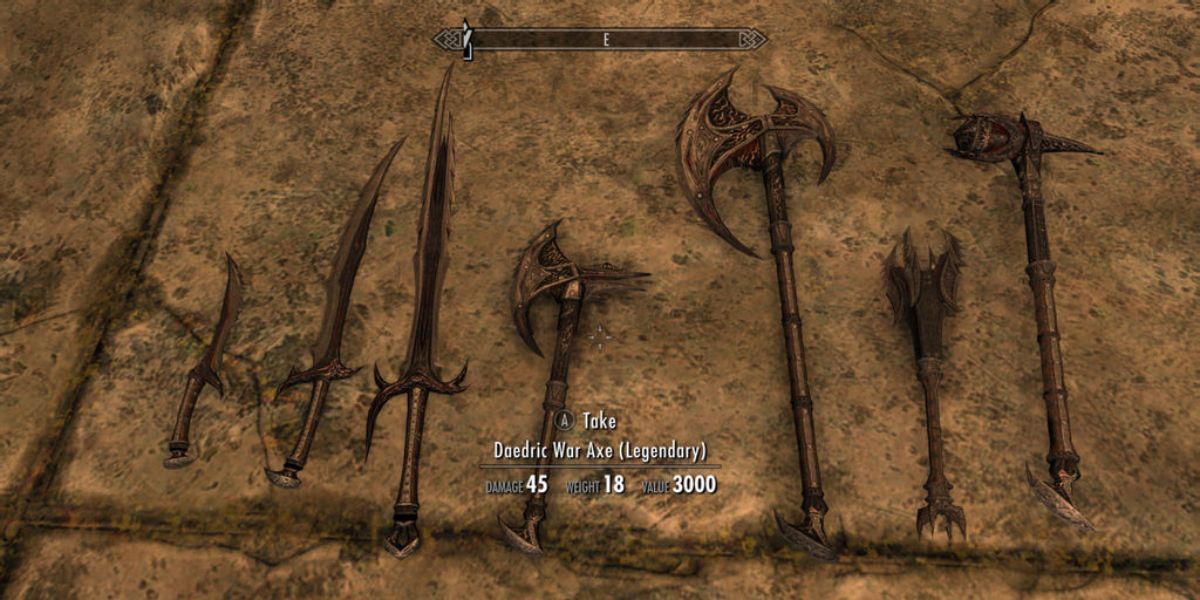 Daedric weapons are some of the strongest weapons in The Elder Scrolls franchise, and their appearance matches their strength as they tend to be incredibly unique and sinister-looking weapons. The Daedric War Axe is no exception to this rule, and obtaining one requires either a high smithing skill or a lucky find while adventuring at higher player levels.

Daedric War Axes deal 15 base damage, which is a lot compared to most of the other one-handed weapons that are encountered throughout the base game, the Dawnguard DLC, or the Dragonborn DLC. 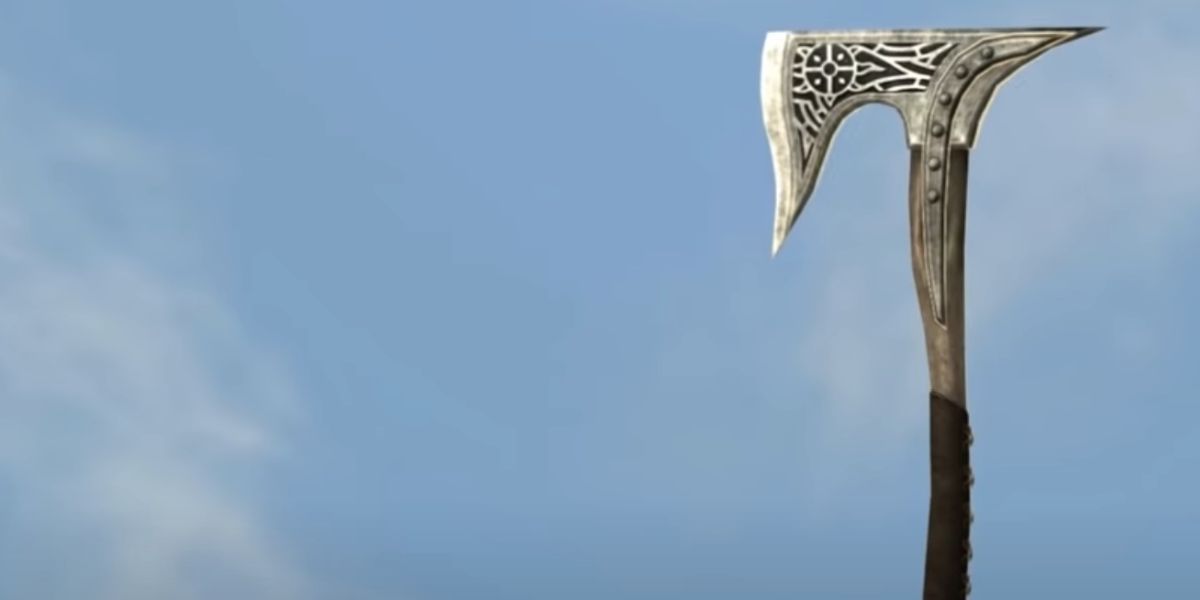 This effect is powerful since it can be increased multiple times, and it makes killing undead enemies very easy. One-handed weapon players that side with the Dawnguard will find the Dawnguard Rune Axe to be a massive help against the vampire menace of Skyrim. This axe is obtained during the side quest “A Lost Relic,” a quest that is only given out by the Dawnguard faction. 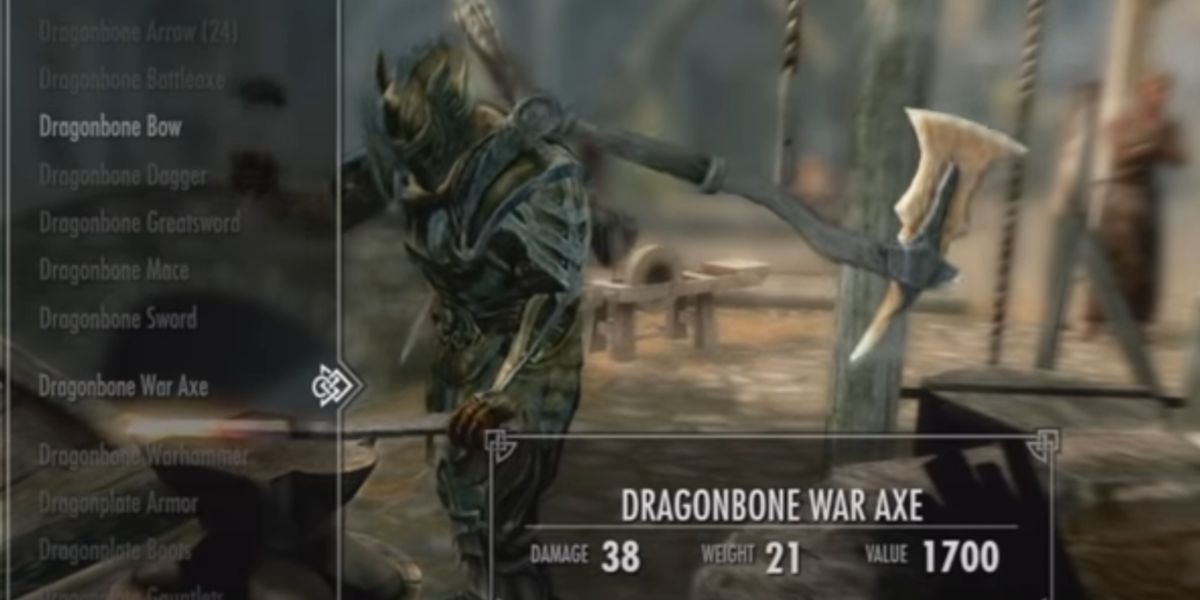 Dragon bone is a very tough material, and it requires a master smith to make us of them at a forge. If the Dragonborn manages to craft a Dragonbone War Axe, then they will have the best possible war axe in Skyrim. Pair it with a strong enchantment and you’ll be hard-pressed to find anything better.