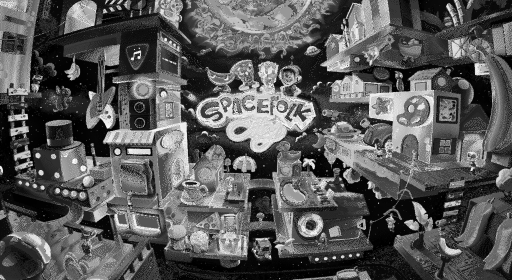 It’s no secret that some genres better fit virtual reality, but Spacefolk City makes me believe city builders are underutilized in this space. Having assisted on Paper Valley and Down the Rabbit Hole, Spacefolk City marks Moon Mode’s debut solo effort, creating a colourful spacebound experience with first time VR players in mind. It’ll require patience but if you’re willing to commit that time, there’s an enjoyable experience within.

Spacefolk City’s premise sees multiple Spacefolk stranded after their worlds become uninhabitable, as their orbiting star enters supernova and starts letting off deadly flares. Not wanting to hang around for their early demise, these Spacefolk begin seeking out a new home, though unlike most city builders, you aren’t building them a permanent structure. Rather, you’ll be creating new settlements that can safely move themselves to new locations, should this happen again.

Split between eight campaign levels, you’ll need to factor in your city’s needs, though if you just want to build without objectives, there’s a sandbox mode available. Building upon existing rocks in a 3D space, Spacefolk City gives you the freedom to create buildings without gravitational constraint. Providing they’re in range of a power generator that is, so setting that up is your initial priority. Unfortunately, the generator’s range isn’t huge and electric clouds powering them can be sparse, which limits your wider constructions options.

What is it?: An isometric city-building sim in which you build a new home for cutesy space critters.
Platforms: Oculus Quest
Release Date: Out Now
Price: $39.99

Creating buildings requires scrap for your material, and that’s only available by grabbing asteroids. They’ll fly past your settlement with regular frequency, though it’ll take some time to grab enough. If an asteroid collides with a constructed building then fear not, they just bounce back upon impact, no damage done. Once grabbed, pulling them apart with both motion controllers drops a scrap item to give Spacefolk for construction. Once you’ve handed it over, just pick them up, take them to the required building and they’ll get to work.

However, Spacefolk aren’t mindless drones. They’ll gradually get fatigued and picking them up displays their status, showing how much energy they’ve got left. If they need sleep, take them back home, wait for about 30 seconds and they’ll soon be refreshed. They’ve also got specific interests that need catering to, no one wants a boring house after all. Getting them to join your settlement requires decorating each home with specific items, all following specific themes like cakes, gardening, bananas and more.

This silly touch is a big part of Spacefolk City’s charm, offering a vibrant visual presentation that brings some much-needed color to space. You’ll gradually unlock more cosmetics upon progressing, and if you see a rare glowing asteroid, that drops new cosmetic items instead of scrap, so keep an eye out. That’s backed by an electronic-themed soundtrack, which compliments your construction work nicely.

If you wish to boost your workers’ productivity, players can construct three different building types which boost their Speed, Stamina and Skills. Those are available with three separate tiers, allowing you to decorate them with different themes to attract a wider spread of residents. That comes at a cost though, as building one-tier requires significantly less scrap than three, meaning you’ll have to decide what to prioritize. It’s not terribly in-depth but for the intended purpose, this works well.

Spacefolk City doesn’t have an options menu beyond choosing which building to build, though it’s not an experience that needs many comfort options. You can easily play standing up or sitting down, providing you recalibrate your position after. Movement is handled by the Oculus Controllers, using triggers to rotate your settlement for a 360 view.

Unfortunately, those solar flares aren’t just for backstory and sometimes drop into levels, but there are some advanced options to fall back on, like a Defence Beacon to shield yourselves. Refineries obtain more scrap from asteroids, warehouses act as convenient scrap storage and it’s a good set of advanced options. Finally, the Rocket Booster sends away your settlement to complete that stage, but you can’t return back to this world once activated. Inevitably, that makes it tougher to feel invested.

Despite these flaws, there remains plenty to love about Spacefolk City. With some lovely visuals and straightforward mechanics, Moon Mode’s made excellent use of spatial gameplay in a manner only VR could achieve. Creating new settlements is entertaining and while there’s not much here for genre veterans, it’s worth remembering who Spacefolk City’s targeting. If you’re after a city builder with smaller scope, you’d do well to check this out.

For more on how we arrived at this rating, read our review guidelines. What did you make of our Spacefolk City review? Let us know in the comments below!