There’s a long stretch ahead of us before The Batman graces our cinema screens – pandemic permitting. If only we had a roaring Batmobile to get us there faster, especially with the subtle design of Robert Pattinson’s model. It may not be a full-scale vehicle, but Hot Wheels has released a miniature version of the Batmobile from Matt Reeves’ upcoming feature, which gives us a closer look at the car’s details.

Pattinson has some big boots to fill, carrying the Caped Crusader mantle from greats gone before. It’s a kind of pressure that does not seem to faze the 34-year-old actor, who refuses to crumble under the watch of DC fans. Judging by the DC FanDome trailer, it’s almost a certainty that Pattinson will bring something new and darker to the Bat Cave, adding to other notes included by the director which have not been aired in Batman features before – including the black make-up Wayne wears under his cowl. Until the occasion where we get to see Bruce Wayne’s raccoon eyes, Hot Wheels has the Batmobile covered.

Thanks to a post by ‘marvel_dcnerd’ on Instagram, the miniature Hot Wheels model showcases the exterior details of Batman’s car. It’s certainly not as flashy as past Batmobiles (we’re looking at you Val Kilmer), but rather a more realistic version of what a vigilante would drive in modern times. 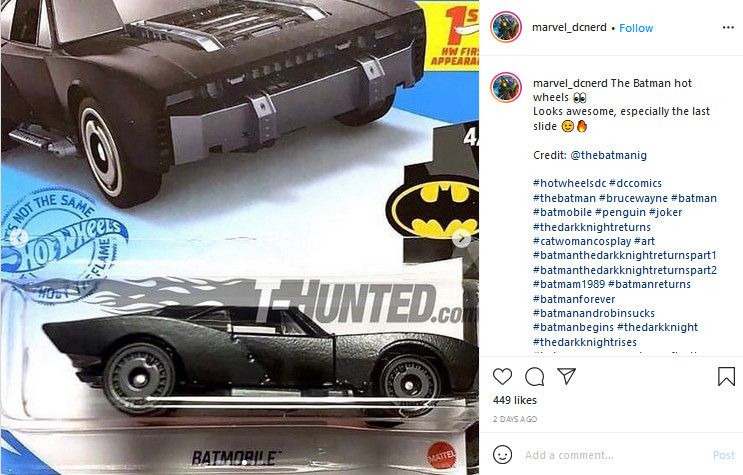 The model of Pattinson’s Batmobile is said to resemble a 1970 Plymouth Barracuda with a Ford Triton V10 engine. It looks rather inconspicuous, which is what you want as a secret superhero, and could certainly be used as transport for the Men in Black too. Pattinson’s Batsuit allegedly has fragments of the gun used to kill his parents welded into the bat symbol on his chest, but it is unclear whether this theme extends to the Batmobile or not.

In order to separate The Batman and his modernized mode of transport from past features, it was announced that Reeves officially set the film’s narrative on Earth-2. The fictional planet will allow multiple Batmen to exist at once – similar to Marvel’s multiverse – without convoluted explanations. Earth-2 may also be the setting of J.J. Abrams’ rumored Superman reboot, which would contribute to establishing a smaller umbrella of the DCEU.