The best family board games for the holidays

The yuletide is once again upon us, and for many of us, that means lengthy visits with friends and family. We all know the stress that can cause, especially in today’s charged cultural climate. It would be nice if the conversation never had the chance to drift toward a discussion of how uncle Fred voted. That, dear reader, is why board games were invented.

Not every board game makes sense for a family gathering. High-concept games like Black Angel aren’t going to go very far, while trying to explain what a “worker placement” game is might put folks to sleep. But no one should be subjected to another round of Monopoly or Trivial Pursuit with so many amazing experiences for sale right now.

Here are six great options from the Polygon tabletop library, all picked with ease of play and availability in mind. In fact, if your neck of the woods is devoid of a friendly local game shop most all of the titles listed below are for sale at places like Target and Walmart. So even if you own one, just pick up another copy and leave it as a housewarming gift. Your in-laws will thank you. 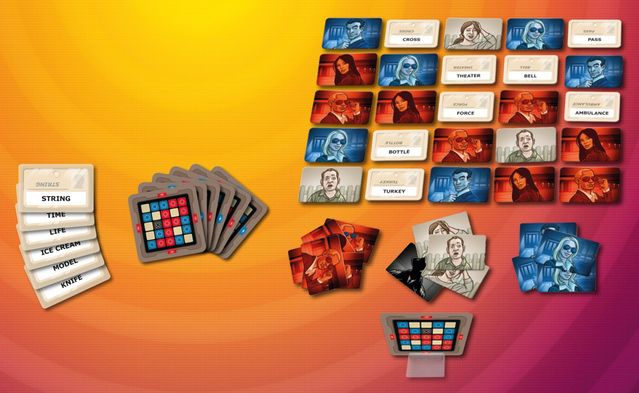 Codenames is a game that doesn’t require much explanation. Just set it up on the table — a five-by-five grid of cards with benign words written on them — and find three other people who want to get away. You can then start playing just by saying a single word.

Codenames is a guessing game where players take on the role of secret agents. The cards are the codenames of other secret agents in the field. It’s up to the handlers, who have a key that shows them where all the secret agents are laid out on the table, to direct their partner to the right contacts. The catch is that they can only offer clues comprised of a single word.

The secret agent might go by the codename “banana.” A good clue would be to say “peel,” but not if there’s an enemy agent named “orange” somewhere on the grid. There are myriad variations of the game as well, including Codenames: Disney, Codenames: Marvel, and even a borderline naughty version at Target called Codenames: Deep Undercover. For best results, I recommend combining regular Codenames with Codenames: Pictures. A wooden insert from The Broken Token even makes it possible to carry both inside the same box. — Charlie Hall 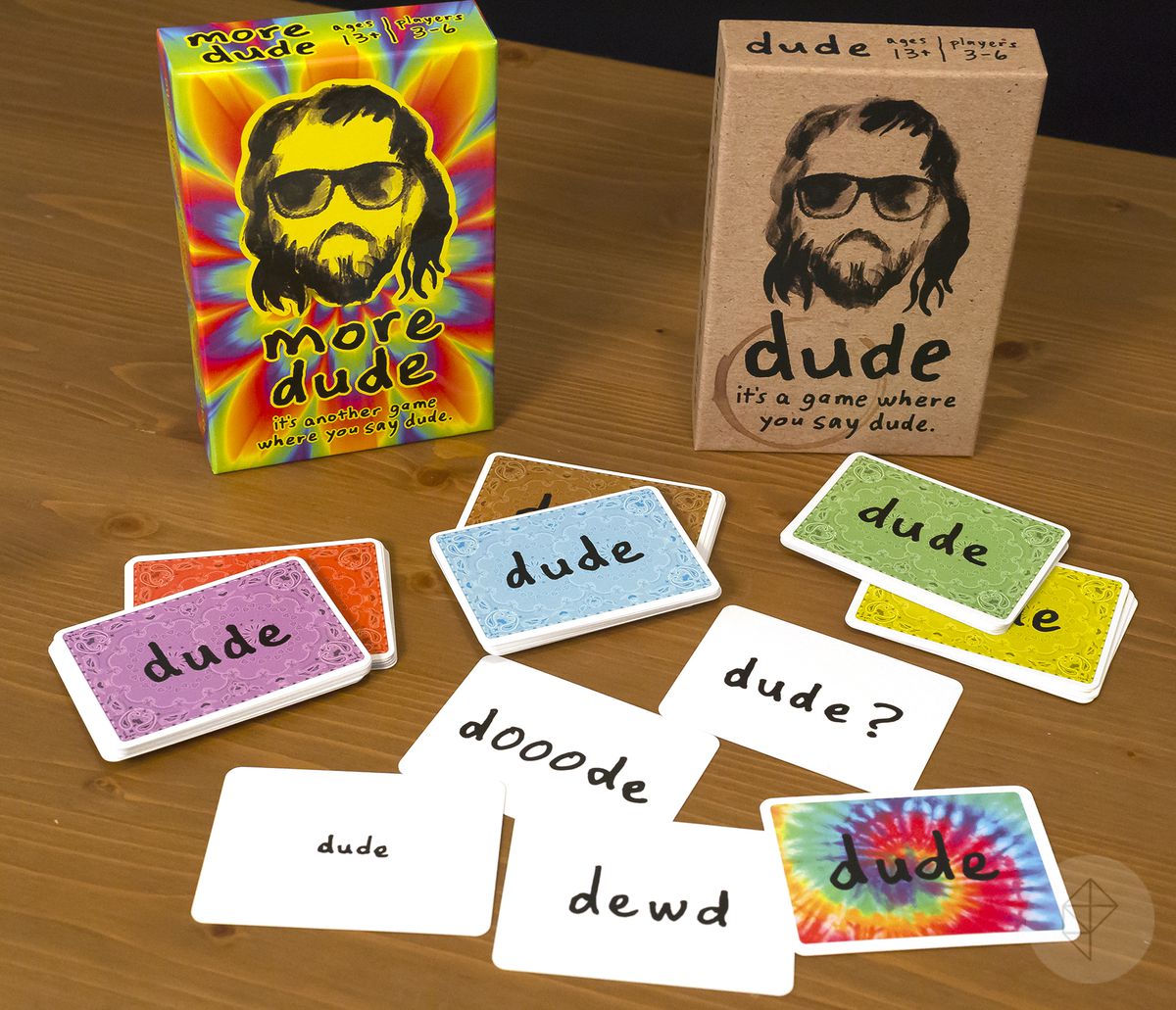 What ultimately happens is that you end up with a table full of people shouting “dude” at each other and laughing hysterically. It sounds insane, but Dude has a magnetic quality to it unlike any other game I’ve ever played. Start a round with four people, and by the time it’s over you’ll have four more lined up and ready to go. There’s also an expansion pack called — you guessed it — More Dude. — CH

Board games aren’t always the best option. People have a healthy fear of staples like The Game of Life and Risk, and even modern classics like Cards Against Humanity can be ill-suited for groups with mixed age ranges or differing political views. But everyone loves good music, and Earworm is a game chock full of great songs.

The catch is that there’s no actual sound inside this petite, yet elegant, little box. Players pull a card and then have to hum — or, in my case, whistle — a tune. It’s a game of musical charades, with a set list that spans generations. Don’t worry about scoring points, because this one is all about performance.

For best results, divide the deck ahead of time into batches of tracks that certain age ranges will be able to recognize in an instant, and feed the most reticent players the juiciest songs. It’s like a night out at a good karaoke club, just without the weird booths, over-priced drinks, or that one waiter who always ruins the moment by opening the door at the wrong time. — CH

Get Earworm here: Backerkit (listed as a pre-order, but copies are shipping) 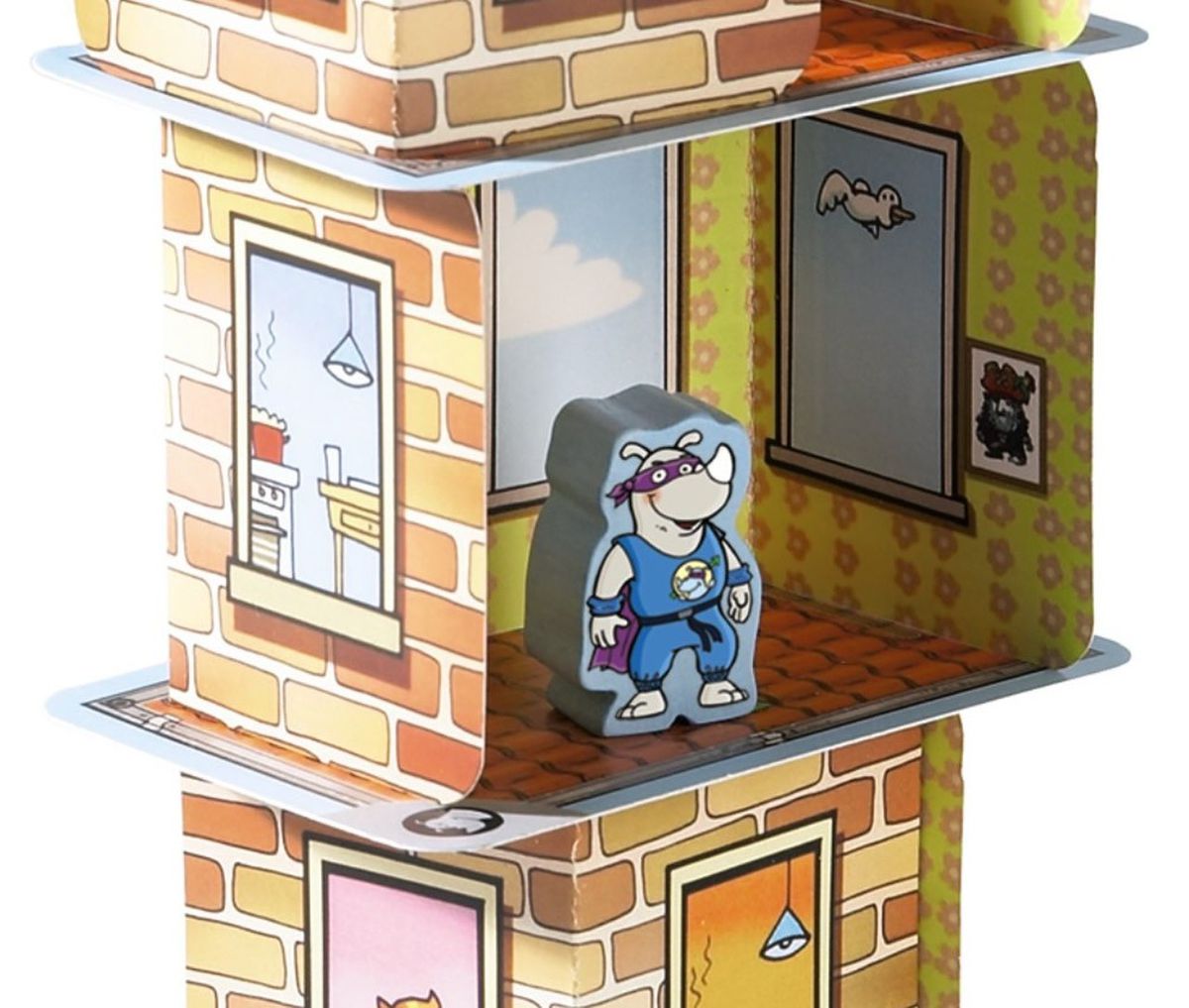 We’ve all been to parties with large groups of children. This is where parenting styles often come into conflict. Becky’s kids are clean and largely mute, marching to and from the dinner table with passive smiles on their faces. Meanwhile, Tom’s “children” are swinging from the chandeliers. Thankfully, a game like Rhino Hero can easily tame the whole bunch. You might even have some fun playing as an adult.

Rhino Hero is a dexterity game at its core. Players each have a hand of cards, and play them on their turn to build a tower. It’s part Uno, and part Jenga, with delightful little animal-shaped meeples thrown in for good measure. Best of all, it’s highly portable, with versions of the game that easily fit inside a coat pocket. — CH 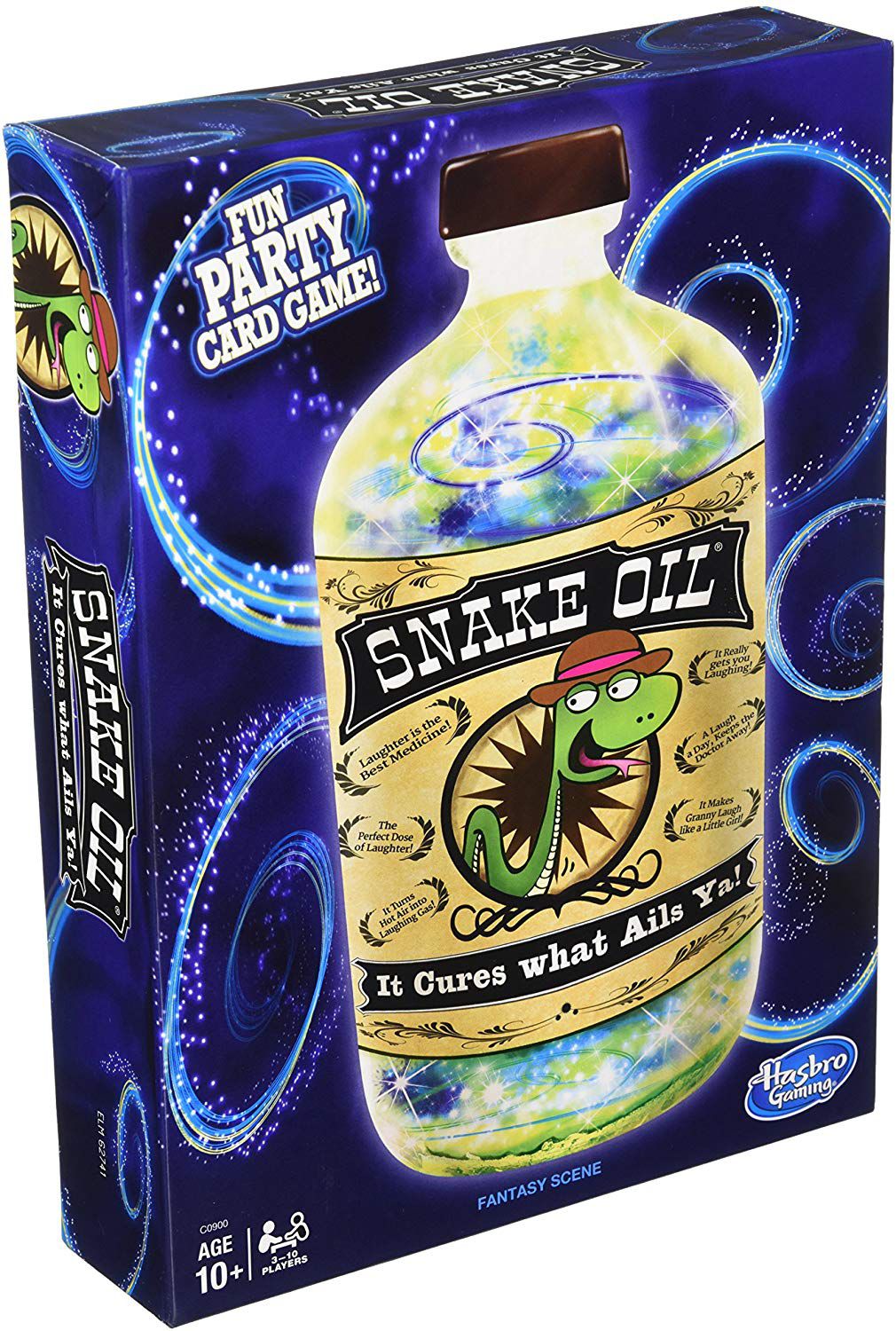 Games in which players take turns judging submissions from the rest of the group are pretty popular, from the family-friendly Apples to Apples, to the decidedly NSFW Cards Against Humanity. Generally those games derive humor from the cards themselves, or at least the juxtaposition between the submissions and the prompt. It can get old, especially when you’ve played so often that you know exactly what cards are in the box and which are most likely to make a specific family member laugh.

Snake Oil is similar to those games in a lot of ways, but it focuses on having players make jokes of their own. Players take turns assuming the role of a different customer each round — it could be a cheerleader, a caveman, a burglar. Every other player has a hand of cards with a single noun, things like “snow,” “hairbrush,” and “rope.” They pitch a product to the customer by combining two of those cards, who then decides which of those items they’d most like to buy. The most convincing salesperson wins the round.

Snake Oil is especially great at getting family members to come out of their shell. It’s always hilarious when your shy aunt pulls out the oiliest, most manipulative sales pitch you’ve ever heard. I’ve played with everyone from my in-laws to my college friends. The game works the best when everyone gets on board with the premise and rallies around a specific pitch. One post-Thanksgiving dinner game, my mother-in-law dropped the mic so hard with a two-word pitch it left everyone in tears. I don’t remember the specific product, but everyone decided she was the clear winner. — Emily Heller 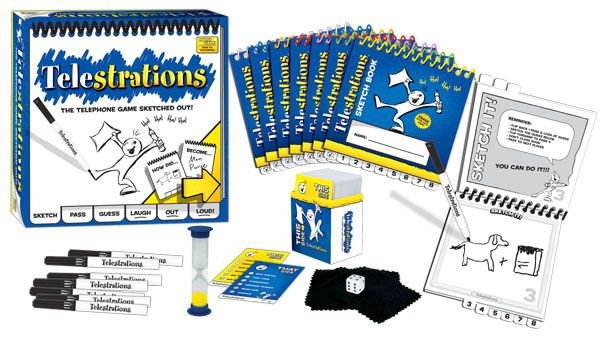 Sometimes you can find yourself sitting around an empty family room with a dozen or more people. The football game is growing tiresome, and the goose is still hours away from getting cooked. That’s a great time to bust out Telestrations.

In Telestrations, each player pulls a card with an innocuous word or phrase on it. Then they draw a picture of that word, and pass their drawing to the left. The next person also draws a picture, but without looking at the word. All they have to go on is the image that the last person drew. By the time your drawing makes it all the way around the room and back to you, hilarity will have ensued. Each round ends with everyone sharing the evolution of their word, and how various people down the chain utterly botched it.

Inside a box of Telestrations is a set of laminated binders, some dry erase markers, and a deck of cards. Each set comes with enough components for up to eight players, so two copies will get you everything you need for a group of 16 players. The more the merrier, as Telestrations is the rare example of a game that becomes more fun the more people you can gather around the table. — CH