The Serpent Rogue: How To Beat The Corrupted Valravn

The Serpent Rogue starts off innocuously enough, but if you follow your objectives as they're given to you then you'll soon find yourself at the mercy of the Corrupted Valravn, the game's first boss. It's entirely possible for this beast to be the very first enemy you encounter in the game, and chances are the meeting won't end well for you the first time around.

Don't be discouraged if the Valravn takes you down right away – once you've learned a bit more about the game you should be able to bring it down easily. Here are our tips for overcoming this initial challenge on your Warden's journey.

How To Reach The Corrupted Tree 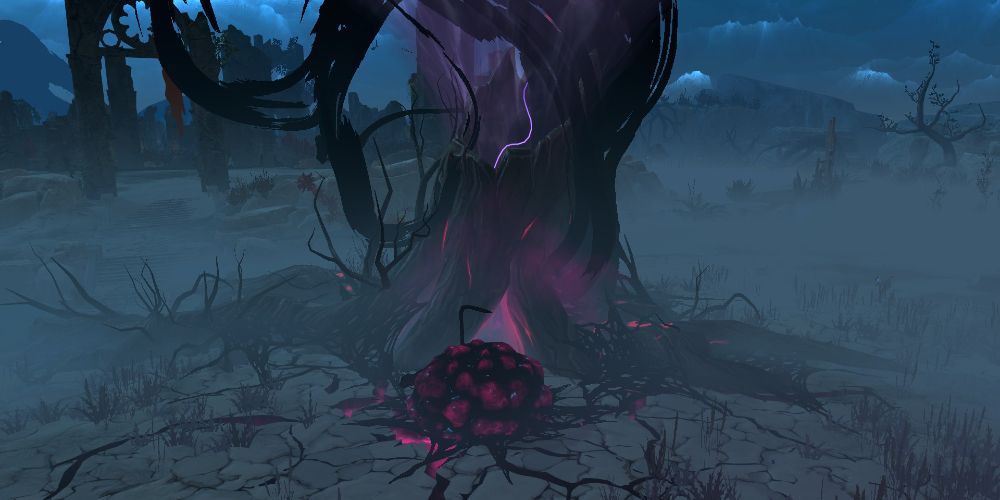 At the beginning of the game, after Solomon introduces you to the facilities you have at your disposal in the Abandoned House, the only way to go is east to the Camp. This is the other half of your base of operations, where your followers will gather once you have some.

All the roads leading away from the camp are blocked except for one in the northwest. This path will lead you to the Wasteland, where you'll see the Corrupted Tree in the distance.

Your first major objective in the game is simply to reach the Corrupted Tree. It's plainly visible from the time you enter the Wasteland, so just head northeast toward it. You can either wade across the river or use one of the bridges, since getting wet won't affect anything at this point in the game.

When you approach the Corrupted Tree, the Corrupted Valravn will appear. The boss is content to simply chase you away if you draw too close, and will stop following if you put sufficient distance between it and yourself. However, if you draw it away from the tree it will simply lie down wherever it is when it gives up the chase, leading to potentially awkward situations in the future. This also happens if the Valravn kills you, and when you return to retrieve your belongings you'll find the boss sitting right on top of them at the spot where you died.

How To Defeat The Corrupted Valravn 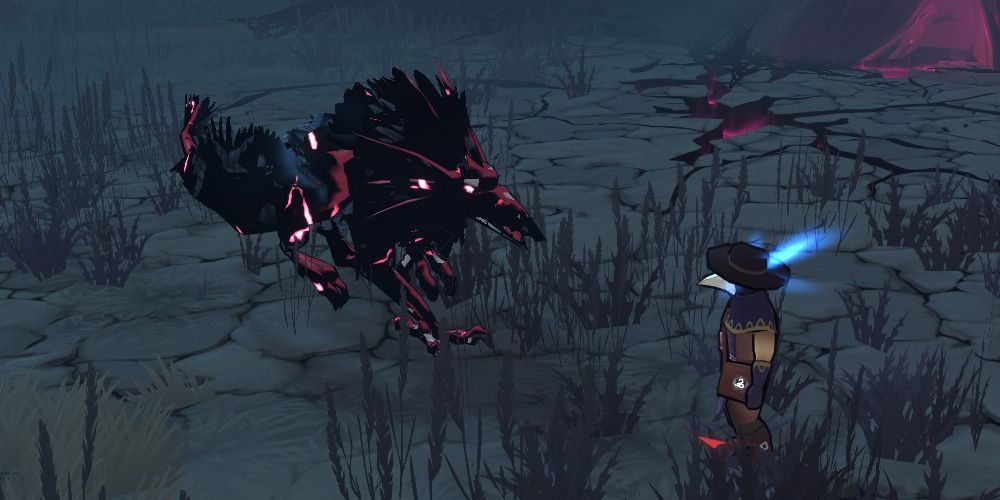 The Valravn hits hard, dealing as much as eight damage with every attack. It also has dozens of hit points, so even arming yourself with a simple weapon like an axe is a risky proposition – the weapon will probably break before you manage to bring the beast down.

The Warden mentions that purifying the Corrupted Valravn could be an option, but since the materials required to do so are hard-to-impossible to come by at this stage in the game it's recommended that you just fight the monster on your first playthrough.

It's best to simply avoid approaching the Corrupted Tree until you've learned your way around the laboratory and can brew up some basic potions for yourself. The Abandoned House and the Camp have all the ingredients you need to create Healing+ and Damage+ potions, both of which are essential for defeating the Corrupted Valravn. You can also wander the Wasteland looking for more advanced ingredients, but this can also be done once the Valravn is beaten.

Gather and research the following materials:

Brew up three to five Healing+ potions and ten to twelve Damage+ potions. You can also supplement this with the less-powerful versions waiting for you in the Warden's Chest the first time you open it.

Equip the potions to the slots of your choosing and go to face the Valravn. Keep your distance and throw Damage+ potions at it by holding the right mouse button to aim while the potions are equipped, then left-clicking to throw. This is easiest if you lock onto the boss first. Between the Damage+ potions you've made and the regular Damage potions you started with, you should have enough firepower to kill the Corrupted Valravn. If it's holding on with a small sliver of its Vitality bar left, finish it off with an ax or torch. Drink your Healing+ potions as needed in the event that the Valravn manages to hit you.

How To Purify The Corrupted Tree 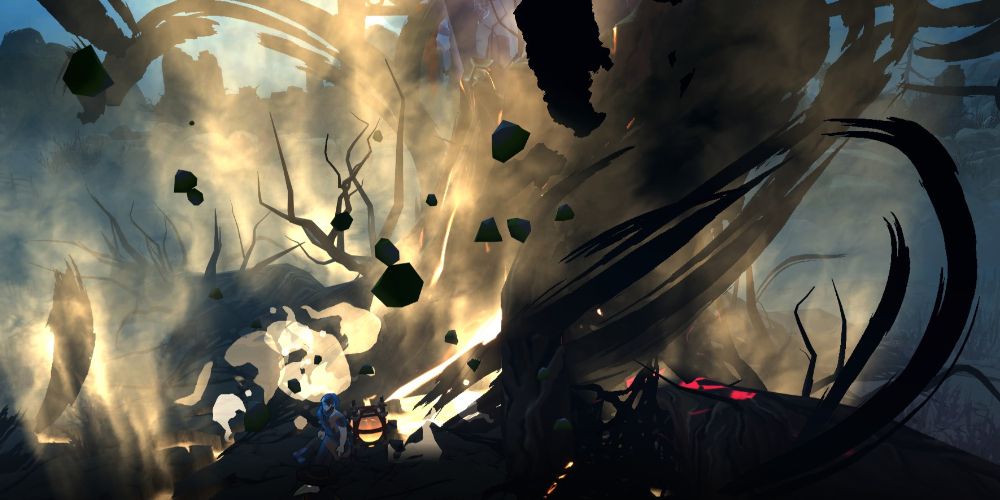 Once the Corrupted Valravn is defeated, you still need to deal with the giant evil tree blocking your path. Inspecting the tree tells you that you need a substance called Sanctum. Sanctum can be obtained by throwing 100 coins into the glowing well at the Camp. You don't have to throw it in all at once – as soon as your total hits one hundred, Sanctum will appear.

Use the Kiosk at the Abandoned House to fulfill potion requests until you have the money. Try to have about 20 extra coins beyond what you need for the Sanctum – it will come in handy later.

Once the Sanctum appears, interact with it to contain it in a vessel. The Warden can't carry the vessel on their own, though, so you'll need an extra pair of hands. You'll need to hire a follower at the Pier.

Find a torch in the Wastelands or craft one at the Smeltery for one Textile and one Log (remember, you'll also need a piece of Charcoal as fuel). The thorns in the northeast corner of the Camp will recede when approached by a character with a torch equipped – use the torch to light the three braziers on the left side of the passage and the thorns will permanently recede, opening the way to the Pier.

Walk slowly when using the torch to pass through the thorns – at full speed you move faster than the thorns withdraw, which can cause you to get caught in them and take damage. If you have a tamed beast following you, such as the dog near the entrance to the Wastelands, instruct them to wait before approaching the thorns as they can easily get themselves caught if they follow you.

At the Pier, you can spend coins to hire followers who periodically arrive on ships. The first ship takes a few minutes to arrive after you first speak to the Harbormaster, so either take a nap in a bed or use the time to gather and craft more materials. When the ship pulls up to the docks, hire at least one follower. The cheapest one is fine, all you need them for right now is to carry the Sanctum vessel.

With your new follower in tow, return to the Sanctum vessel and interact with it. Use the "Pick Up" option to instruct your follower to carry the vessel. Go back to the Corrupted Tree and place the vessel on the gold X by the roots, and the tree will vanish. From here, you can continue exploring.