The Witcher 3: The Beast Of White Orchard Walkthrough

In the beginning of the Witcher 3, Geralt and his mentor Vesemir are trying to track down Yennefer and her whereabouts. Their search leads them to the village of White Orchard, where a griffin is terrorizing the town and the area around it. It just so happens that in order to learn about Yennefer's whereabouts in the Lilac and Gooseberries quest, you first have to complete The Beast of White Orchard quest.

While not an official witcher contract quest in the game, The Beast of White Orchard quest in the Witcher 3 instructs you on how to most effectively kill a certain type of monster. There is a lot to do before you actually eliminate the griffin.

How To Start The Beast Of White Orchard 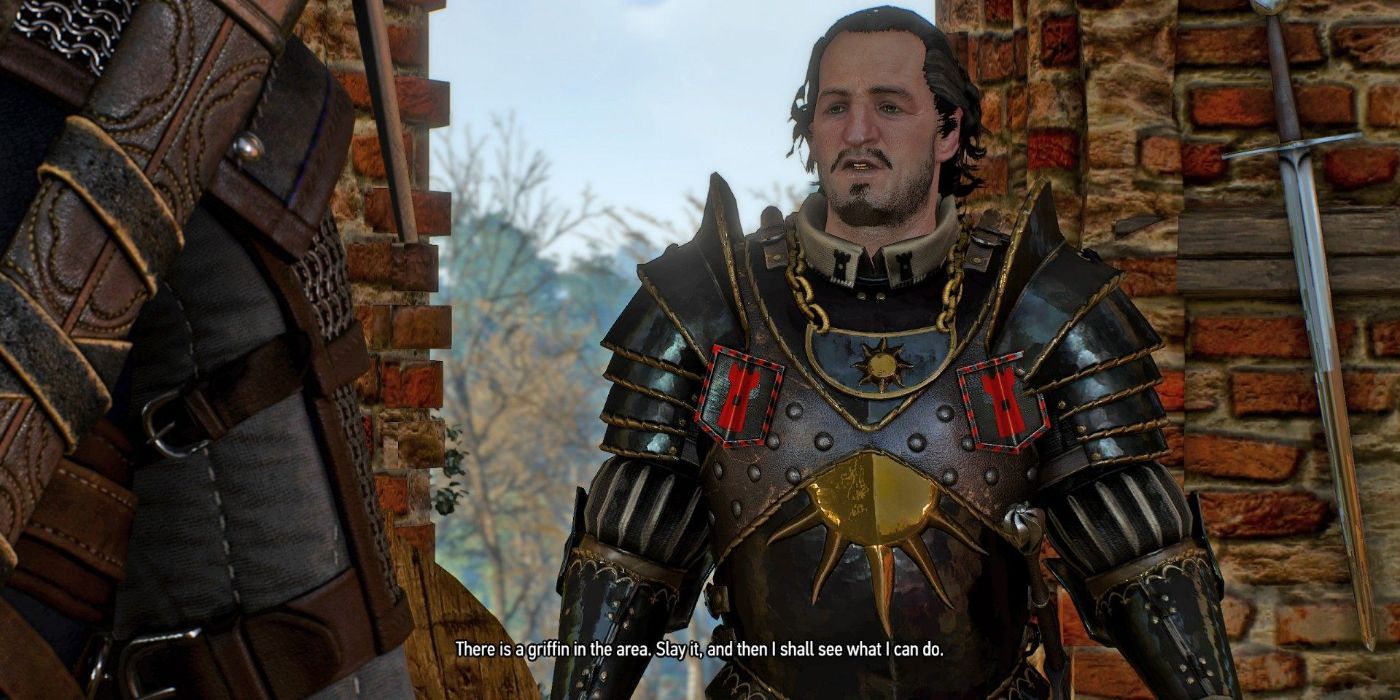 The Beast of White Orchard quest in The Witcher 3 is part of the main quest and is activated when you talk to Nilfgaardian captain Peter Saar Gwynleve at the nearby Nilfgaardian Garrison. It has a suggested level of 3 so it's best you make sure you're at or near that level. Peter will point you toward a hunter and herbalist that should help in preparing for the griffin. 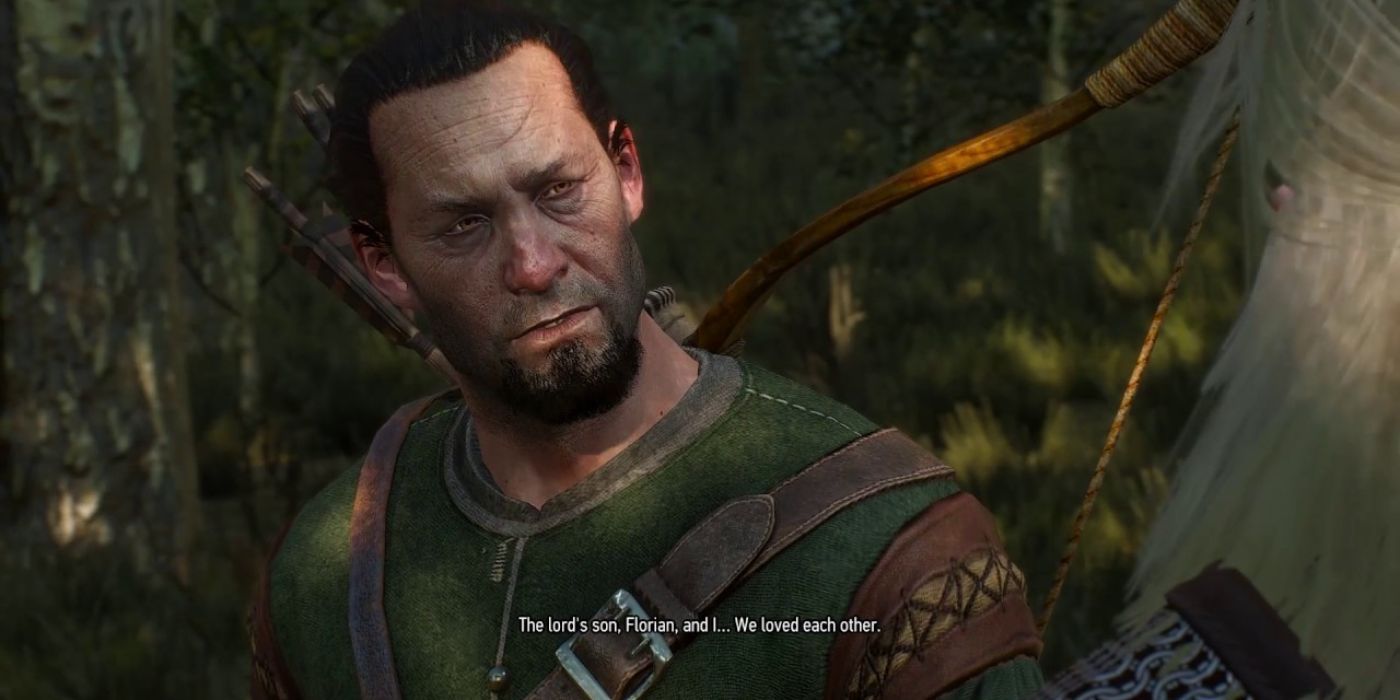 Follow the quest objective to the hunter's hut, where you will find out he is actually out hunting. You can examine some tracks with Witcher sense that will lead you to the hunter — his name's Mislav. Talk to him and he'll inform you that he is currently tracking down some wild dogs to hunt. You can either help him kill the dogs or tell him you're in a hurry, then Mislav will lead you to the site of the griffin's attack on a Nilfgaardian patrol.

There are four clues that can be examined — they're revealed easily if you use your Witcher senses: 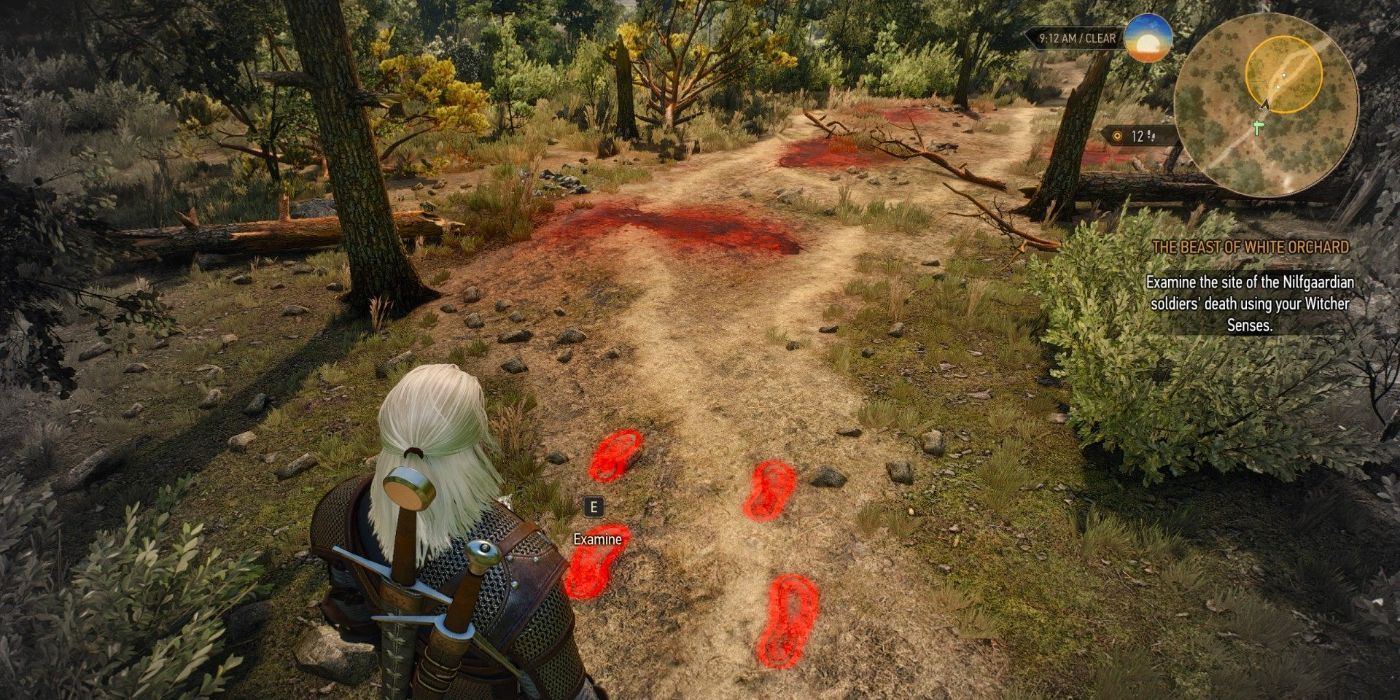 Once all four clues are examined, follow the tracks using Witcher sense. They will lead you across a bridge and up a hill to the griffin's nest. There you will find more things to examine.

As it turns out, the griffin terrorizing White Orchard is a male whose mate was killed by the Nilfgaardian soldiers that were camped near its nest. Now the Beast of White Orchard hunts everyone nearby, regardless of whether they're innocent or guilty, in a quest for revenge. 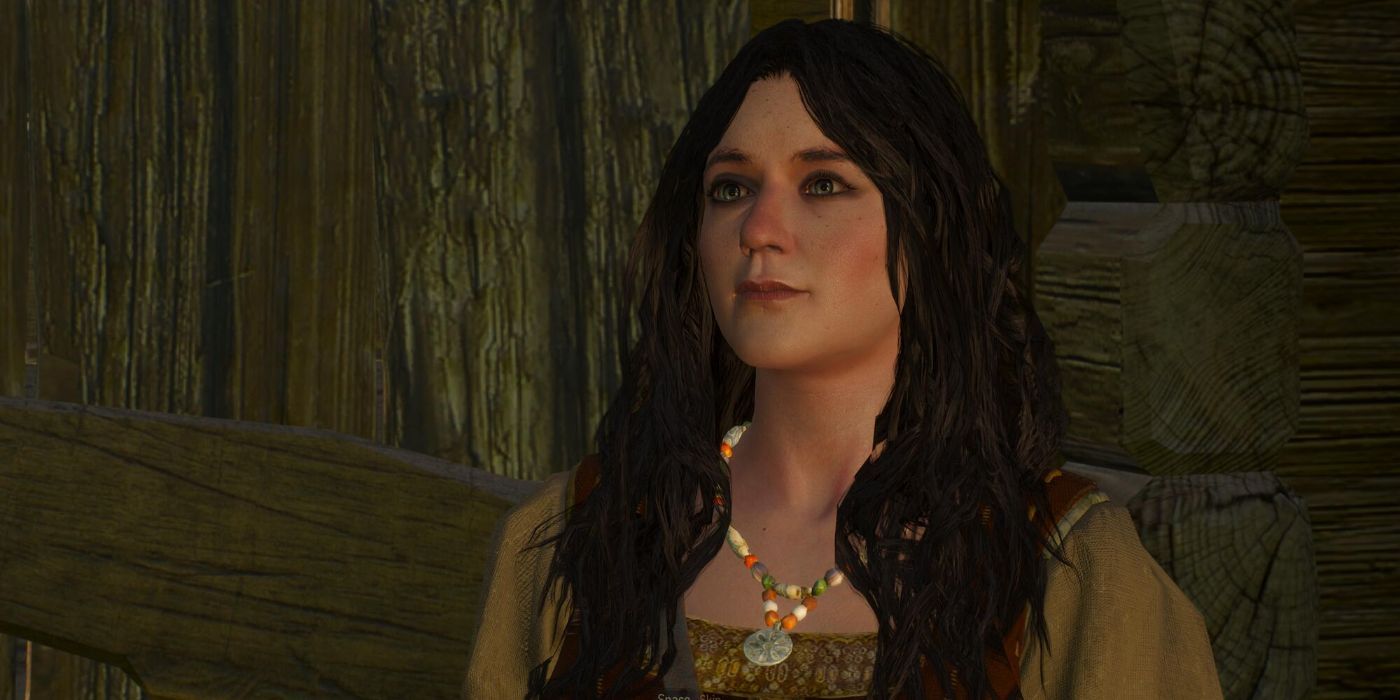 After that, head over to the herbalist, Tomira, to find out what can be used to best help you take down the griffin. Tomira will suggest you use buckthorn and will point you to the riverbed to find it. You can also ask Tomira about the dying girl on her bed, which will start its own quest — On Death's Bed. It's good for some extra XP, but not necessary to complete the Beast of White Orchard.

Next, head over to the riverbed​​​​​​, which will be marked by a quest marker. The buckthorn will be underwater, so dive into the water to find the buckthorn and finish this part of the quest. 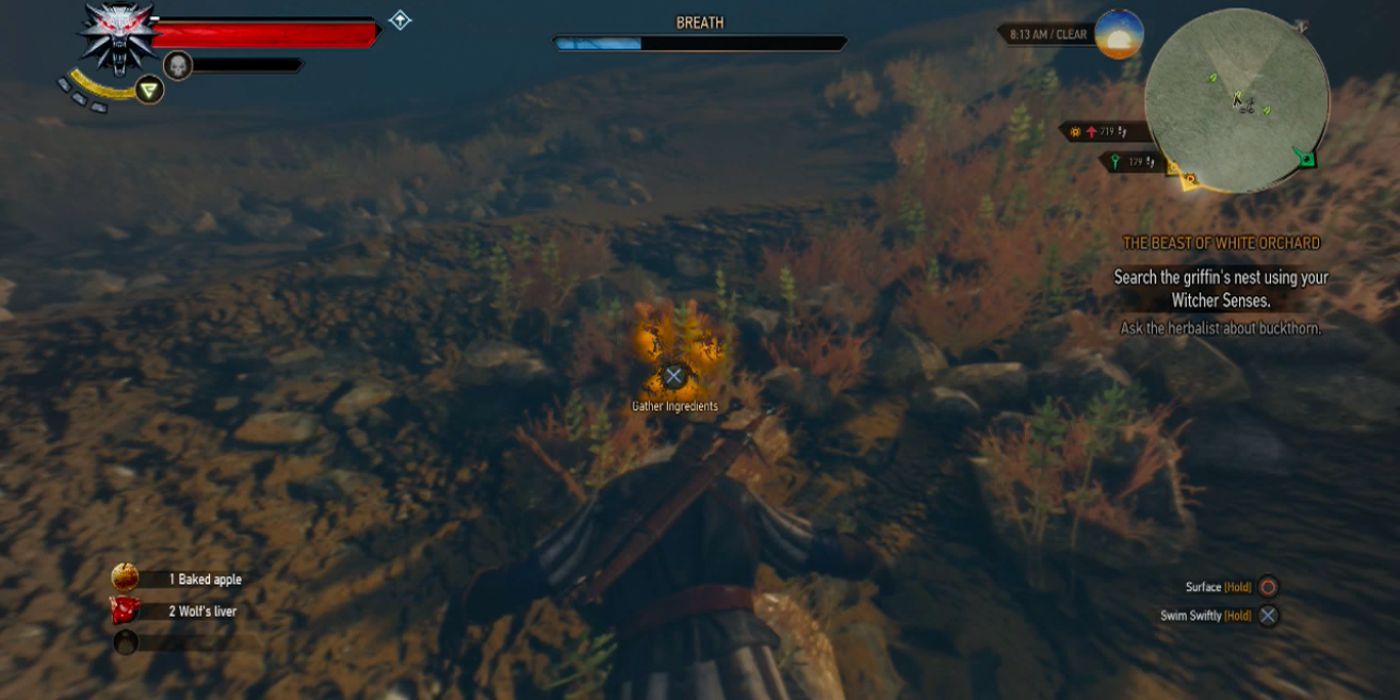 Return To Vesemir And Preparing For The Griffin

Once these two parts are complete, head over to the White Orchard Inn and talk to Vesemir. Tell him about your findings and he'll tell you that he has found a farmer's field that will serve as the perfect ambush spot. Vesemir will meet you there once the conversation ends.

Before you head over to Vesemir's location, it is still best to acquire a few things as they will make the fight with the griffin easier. It's best to craft the Viper School swords — the diagram to craft them can be found in the White Orchard Cemetary. In terms of potions, be sure you have both Swallow and Thunderbolt potions on hand. Crafting both Grapeshot Bombs and Hybrid Oil will also help deal extra damage to the griffin. 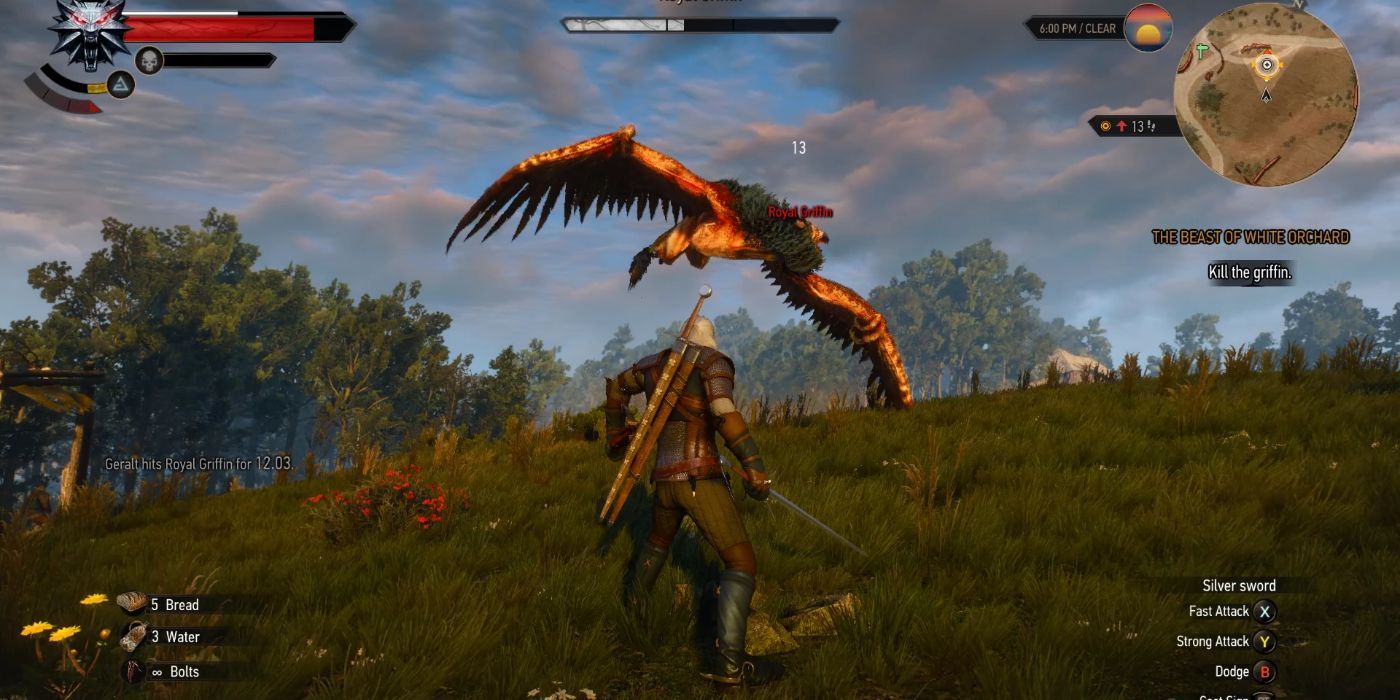 Now it's time for the climax of The Beast of White Orchard. Head over to the farm and talk to Vesemir. Be sure to coat your silver sword with that Hybrid Oil before talking to Vesemir. He will give you a crossbow to help with fighting the griffin. After this, the fight with the griffin will begin as he takes the bait.

It will fly in, so use the crossbow to force the griffin to land. When it lands, avoid attacking the griffin from the front as the bulk of the damage it can deal is done from there. Try to stay behind it or to its side, and use the Aard sign to get some space by stunning the griffin (Vesemir will be around to help in this fight, so you don't have to fight the griffin alone, thankfully).

Once the griffin's health is at 50 percent, it will fly to a nearby ridge to change up the terrain. Head over to the griffin to continue the fight. Continue using the same strategy as before until the Beast of White Orchard is finally no more. Once it's dead, loot the griffin's body to collect its head as a trophy (and for some good loot as well).

Completing The Beast Of White Orchard

After all is said and done, head back to the Nilfgaardian garrison and talk to Gwynleve to complete the Beast of White Orchard. He will offer you some money as a reward. You have the option of accepting the money, which nets you some coins but less XP, or turning it down, which will of course give you no money but more XP.

Now you can continue with the Lilac and Gooseberries quest, as the captain will tell you that Yennefer has gone to Vizima.