Upswings in ransomware and phishing, as well as cloud and web application attacks, mark the computing landscape today. Events like the Colonial Pipeline hack highlight the increased role threat actors play as they reinvent themselves to exploit newly found weaknesses.

Verizon’s Data Breach Investigations Report for 2021 finds the world’s threat actors have one thing in common. They all crave cold hard cash and are digitally transforming themselves fast to get it. Cloud apps, phishing, and ransomware are where the digital transformation begins.

Breaches today most often start with social engineering techniques designed to get buy-in from busy end users, the Verizon study found. That’s the first step in accessing privileged credentials, delivering ransomware, or finding other vulnerabilities across a network.

Threat actors know any breach strategy in the cloud depends on getting social engineering right.

Verizon found that 85% of the breaches involve a human element, which threat actors prefer by a 24% margin over breaches involving credentials. Verizon also found a correlation between the increase in social engineering breaches and cloud-based email servers being compromised.

That is because, the study speculates, emails are being mined for privileged credentials and used for mass mailings of phishing attempts and ransomware delivery. 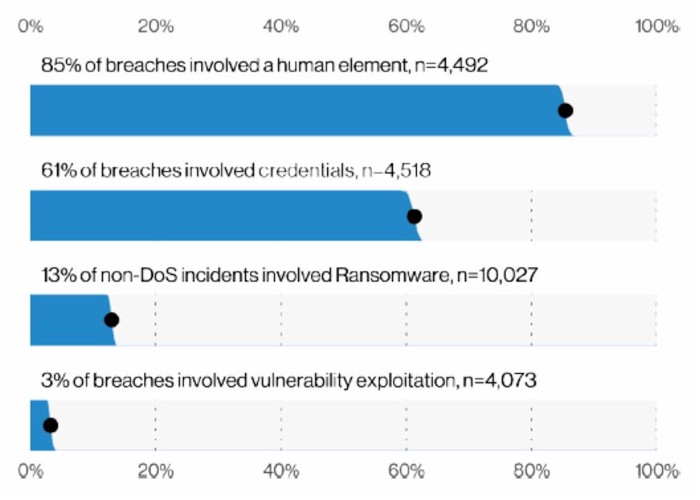 Into the data breach

These days, threat actors often combine technologies and techniques in their strategies to breach an organization. That is according to the report, which is based on 79,635 incidents, of which 29,207 met Verizon’s quality standards and 5,258 were confirmed data breaches. Verizon sampled from 88 countries around the world for the study.

Threat actors tend to concentrate on the following strategies, according to Verizon:

The Verizon study provides a sobering glimpse into how quickly cybercrime is changing to become more opportunistic, deceptive, and destructive to its victims.