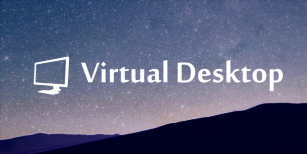 Virtual Desktop now has a beta of its own take on Facebook’s Asynchronous Spacewarp (ASW) – and the extrapolation is actually better.

Air Link, like the Oculus Rift headsets, has a feature called Asynchronous Spacewarp. It kicks in automatically when your graphics processing unit (GPU) isn’t meeting framerate. It forces the running app to render at half the refresh rate of the headset and extrapolates a synthetic frame after each real frame. When your GPU utilization drops low enough, it deactivates and the app returns to normal rendering.

Virtual Desktop’s new Synchronous Spacewarp (SSW) feature works somewhat similarly. But unlike ASW, SSW extrapolation runs on the headset itself, not on your PC. That means it works with any GPU and doesn’t have the PC performance impact of ASW.

Godin says he worked closely with Qualcomm, the maker of the Snapdragon XR2 chip in Quest 2, to make this possible. SSW isn’t available on Quest 1.

We tested Virtual Desktop’s SSW and found it has noticeably better extrapolation than Facebook’s ASW, as you can see in Godin’s provided video above.

Synchronous Spacewarp (SSW) is available on the Beta branch. You can select a branch in the Oculus phone app – scroll down on Virtual Desktop’s store page and tap the version number. Like with ASW, you can disable SSW if you don’t want it.

The stable PC streamer available from vrdesktop.net does support SSW, but doesn’t properly report it to SteamVR or the game, which could cause issues. For full support, you can get a beta version of the streamer on the Virtual Desktop Discord.