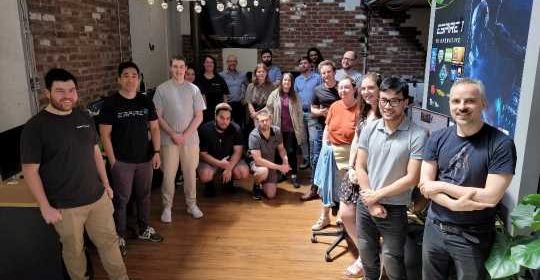 For bourgeoning Melbourne-based VR game studio Digital Lode, things are about to change.

The team just launched Espire 2, a Quest 2-exclusive sequel to 2019’s Espire 1: VR Operative. For the first time in a while, Digital Lode founder Michael Wentworth-Bell is thinking about the future of the studio, beyond the Espire franchise.

“It sounds strange, but a real goal is to actually start acting like a company,” he tells me, sitting in Digital Lode’s Footscray office, a few days before the launch of Espire 2. “Even still, our front door just says Espire. It doesn’t have any [Digital Lode] branding on it. All we’ve ever done is think about Espire, because the company came second.”

As we discuss the story of how Espire (and by extension, Digital Lode) came to be, a collection of classic video games and consoles are proudly displayed on shelves behind us. Many of those titles served as guiding lights for the team while working on the Espire franchise. It’s clear that the studio respects and understands the shoulders of the gaming giants on which they stand.

Now with a team of 23 people, Digital Lode is one of the largest VR-focused studios in Australia, alongside others like Ritchie’s Plank Experience developers Toast. However, the story behind Digital Lode and Espire 1 is one of humble beginnings.

“2017, 2018 and 2019 were the three years of Espire 1 [development], and they were basically just three totally different years,” recalls Wentworth-Bell. In 2016, he was committed to a nine-to-five job as an animator, working out of the same office space that would later become Digital Lode HQ. In his spare time, he started experimenting with VR.

“I was rocking up at 6:00am and then would basically do 6:00am to 9:00am every day, just working on [VR] experiments and then after, at the end of the day, do another two of three hours.” Eventually, he landed on an idea for a VR stealth game called Espire, inspired by Metal Gear Solid. Over 12 weeks, he produced a concept video detailing his vision for Espire and in February 2017, he posted it to YouTube. There was just one catch.

“It was all faked,” he says, laughing. “I didn’t have any real technical skills, so I basically just downloaded a whole bunch of marketplace stuff and put together a test scenario and recorded a video. It showed you being able to tranquilise a guard and pull the magazine out of your gun and throw it and use voice commands to say hands up, [but] none of those features actually worked.”

“It was basically me just kicking off little animation clips, because I knew how to animate stuff.” In the end, that didn’t matter – the video (embedded above) blew up to unexpected proportions. Within the same day, Wentworth-Bell had a plethora of people reach out, interested in the concept and wanting to see more. Multiple publishers soon got in contact as well.

“Espire was this two-minute video that was a lie, and a lot of people were actually saying send us your prototype,” he recalls. “I spent three months just trying to make it playable, because I was like, shit, everyone’s asking for the prototype.”

Even a month after posting the video, there was still buzz online. Taken aback by all the interest, Wentworth-Bell went dark for a few months and continued working on the game. By April, he had something playable to send to publishers.

Among the publishers who had reached out was Tripwire Interactive. Known primarily for flatscreen releases, the publisher would first dip their toes into VR later that year, with Killing Floor: Incursion. After chatting with Tripwire’s then-CEO John Gibson about the Espire prototype, he gave Wentworth-Bell some food for thought. “He was like, ‘Look, it’s just not ready yet. It’s got promise, but you don’t even have a team. You’re one person. But keep in touch.’”

There was one early feature that kept Gibson particularly interested though – Espire’s comfort theatre. The feature, which has been a staple of both Espire releases, is an immersive form of vignetting that limits the user’s field of view by overlaying a virtual room in the periphery. This grounds the player through artificial movement in VR, resulting in a huge reduction in nausea and motion sickness. “He played the prototype and said ‘Look, everything about this prototype is pretty substandard, but this is the first time I’ve ever been able to circle strafe a guard in VR while I’m going down stairs and didn’t puke. That’s amazing.’”

Keen to make progress after his discussions with Tripwire and encouraged by others, Wentworth-Bell soon took a risk and quit his job to focus on Espire full time. By May 2017, potential investors made it clear that he would have to start a company to get any further. Digital Lode began to take shape, largely from the pool of talent who had contacted him about the initial concept video. “A lot of people that reached out to me on that day [the concept video released] ended up becoming employees.”

By the end of the year, the small team had produced another playable prototype that mostly delivered on the promises of the original Espire concept video. “It was still super crap, but you could send it to anyone, they could play it.” From there, the next challenge was a big one: funding. If 2017 had been about making the prototype, then 2018 was about getting that prototype greenlit to become a full game.

Discussions continued with Tripwire, who were willing to fund development of a vertical slice, but only if another funding partner was also on board. Wentworth-Bell had also been talking to VicScreen, an Australian state government agency, about potential funding options, but neither VicScreen nor Tripwire were willing to be the first to commit. “So it was another fake-it [moment]. I was just saying [to Tripwire], ‘Cool, well VicScreen are on board if you say yes.’ And I was telling [VicScreen] that we’ve got an American publisher that will jump on board if [they] say yes. And neither of them were saying yes. And so I just lied and said to both of them, yep, the other party have said yes.”

After that, VicScreen and Tripwire both signed on for funding and the Digital Lode team grew rapidly from just two people to five, working on a vertical slice of what would become Espire 1. Once it was ready, Wentworth-Bell flew over to the United States to demo Espire to some big tech companies, including then-Facebook (now Meta) and Sony.

The team were expecting to develop Espire solely for PC VR platforms, but Wentworth-Bell soon discovered that Facebook were no longer funding PC VR content for its Oculus Rift headset. Facebook told him that if he wanted to get a game green-lit, it had to be on Santa Cruz, the development codename for what would become the standalone Oculus Quest headset.

He was sent back to Australia with two early Santa Cruz prototype devices and went into 2019 with the goal of developing a game that would release simultaneously on PC VR, Quest and PSVR.  “As a first-time team, that was seen as de-risking, to be on all the platforms,” says Wentworth-Bell. “It would mean that there was actually a chance it might recoup the cost of making it.”

As it turned out, launching on multiple platforms stretched the small team too thin and required lots more work than expected. The PSVR port was outsourced to a separate studio, but even preparing Espire for both Quest and PC VR proved a challenge for Digital Lode. “It was just too difficult to try and make it awesome on PC and awesome on Quest. To do that, we literally just made two copies of Espire 1. It was a nightmare.”

Espire 1: VR Operative released for Quest, PC VR and PSVR in November 2019. Despite recouping its development budget within a few weeks, the game still initially underperformed against expectations. It didn’t help that the PC VR and PSVR versions weren’t up to scratch and negative reviews resulted in low user ratings on those platforms. “We just kept saying, ‘Oh, we spent too much time making this game than actually making it fun.’ Too much of our dev time was just making it load on Quest and load on PC and load on Steam…”

However, the Quest release wasn’t plagued by the same problems as PSVR and PC VR. On Quest, Espire 1 found an audience and received a more positive reception compared to other platforms. “By Christmas Day [in 2019], the game had been out for like six weeks and we were already chatting with Oculus saying let’s do another one.” When the pandemic hit a few months later, Espire sales on Quest actually increased to a level higher than they were at launch.

Digital Lode spent the first few months of the pandemic pitching game ideas of various scopes and experimenting with other projects, until Facebook came back to resume sequel discussions. Offering another round of funding, they encouraged the studio to “swing hard” for a full-blown sequel to Espire 1.

This meant Digital Lode would have to scale up once again, this time from 12 people to 25, bringing a new set of challenges. “I totally did not anticipate how hard it is to go from a small team of 8-12 [people] to a company,” admits Wentworth-Bell. “The moment we hit 18 [people], it all fell apart because we were like, ‘Oh my god, the company needs policies and a totally different management structure.’”

Across the next two and a half years, Digital Lode scaled up to 23 people. The team worked though the pandemic to create a fully-fledged sequel with a new campaign and an additional multiplayer mode, implementing lessons learned from the development of Espire 1.

Earlier this month, Digital Lode released Espire 2 exclusively on Quest 2. Now with two big releases under its belt, the company’s focus is shifting once again. “The challenge we’re about to try is, for the first time – instead of being a company that was built all around Espire and it’s only one game at a time – to try to grow, to do two or three [games] over a few years. As a result, we’re going into recruitment mode [in 2023] to build out the teams. We want to grow the Espire team and also a team for another IP.”

After a series of successful post-launch updates for Espire 1, the plan is to offer similar post-launch support for Espire 2, with updates coming down the line. However, Digital Lode has also already been making ground on another unannounced game since mid-2022. “The next game is going to have similar DNA [to Espire]. It won’t be a stealth game, but it will be a shooter. And it will be looking towards co-op, because that’s the big thing that came out of our sequel.”

The last five years have been a rollercoaster ride for Wentworth-Bell and the entire Digital Lode team, but the result sees the studio forging a path forward for Australian VR developers. With ambitious plans to tackle more projects than ever, the trajectory of Digital Lode will be interesting to watch.

“With Espire, we’ve managed to carve out a brand. It has a niche, it’s a stealth game, and through a lot of luck and just good timing, it’s a recognizable brand,” he says. “Espire is kind of sci-fi [and] serious. But [for the next game] we want to go for something that’s totally different. Something fun.”

Espire 2 is available now for Quest 2. You can read our full review here.