Warframe's The New War update brought with it Caliban, a Warframe that uses Sentient technology to dominate the battlefield. That might sound awfully close to Revenant, but Caliban's kit is slightly different from that Eidolon-themed Warframe.

Caliban is a hybrid damage dealer and crowd control Warframe. Enemies that dare get near Caliban will be helplessly lifted into the air before being decimated by a massive explosion, stripping shields and armor in the process. He has solid crowd control, damage, utility, and is fairly tanky when played correctly. Let's go over how you can obtain Caliban, what each ability does, and the best builds to use with this Warframe.

This Article Contains Minor Post-Quest Spoilers For The New War

How To Craft Caliban 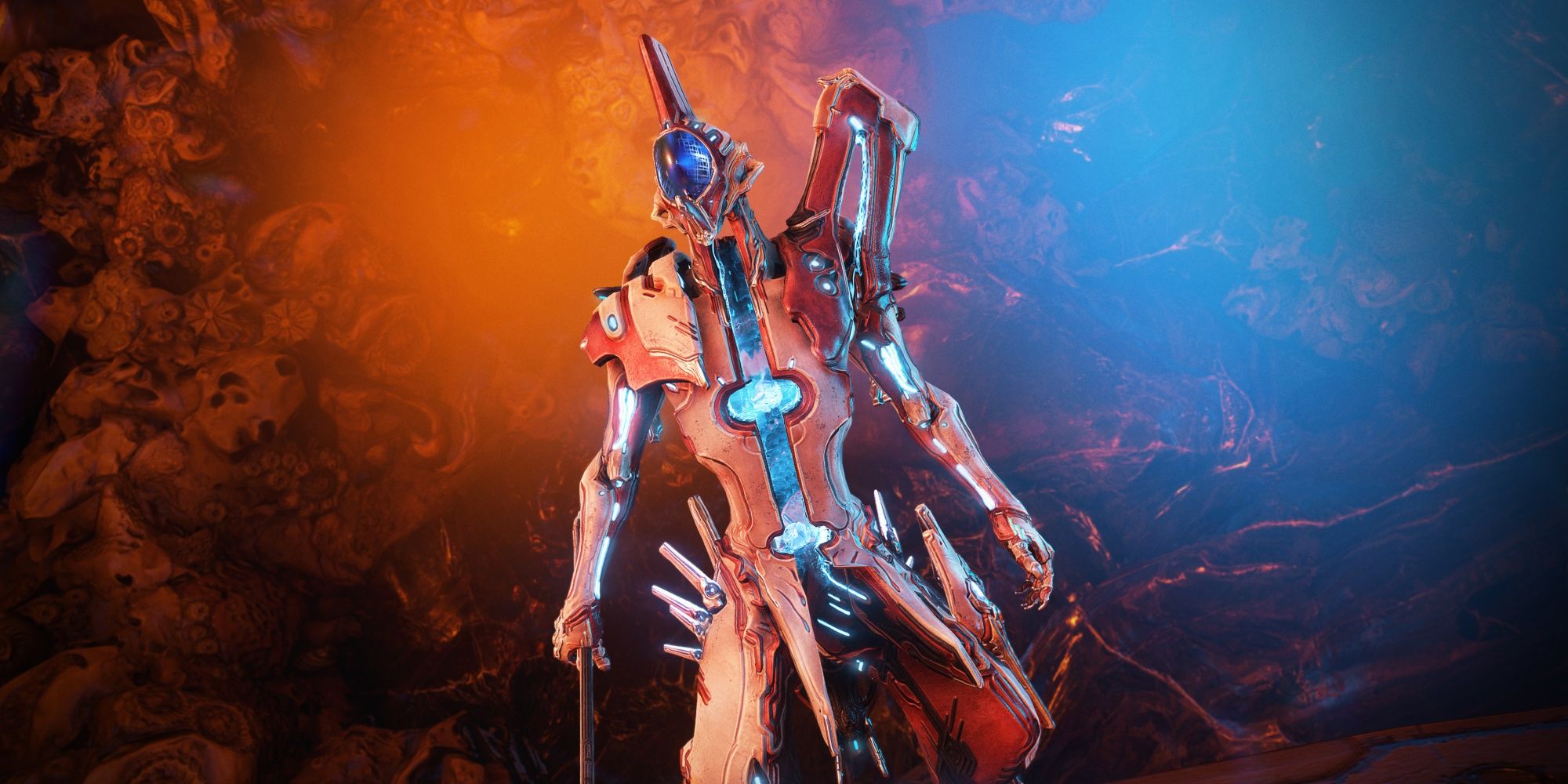 Before you can obtain Caliban's components, you must finish The New War quest. We have a New War prep guide that covers every pre-requisite to this quest. Once you've finished the New War, you'll be able to obtain Caliban's component blueprints from Narmer bounties. These bounties are level 50-70 by default and only appear during certain times of day. The Plains of Eidolon will have Narmer bounties during the day. When the Plains of Eidolon turns to night, Fortuna will house Narmer bounties instead; Fortuna and Deimos's open world timers are irrelevant. Deimos also features no Neramer bounties as of writing.

Whenever the time of day changes, the Caliban part available from the Narmer bounty changes. The part chosen seems to be random. 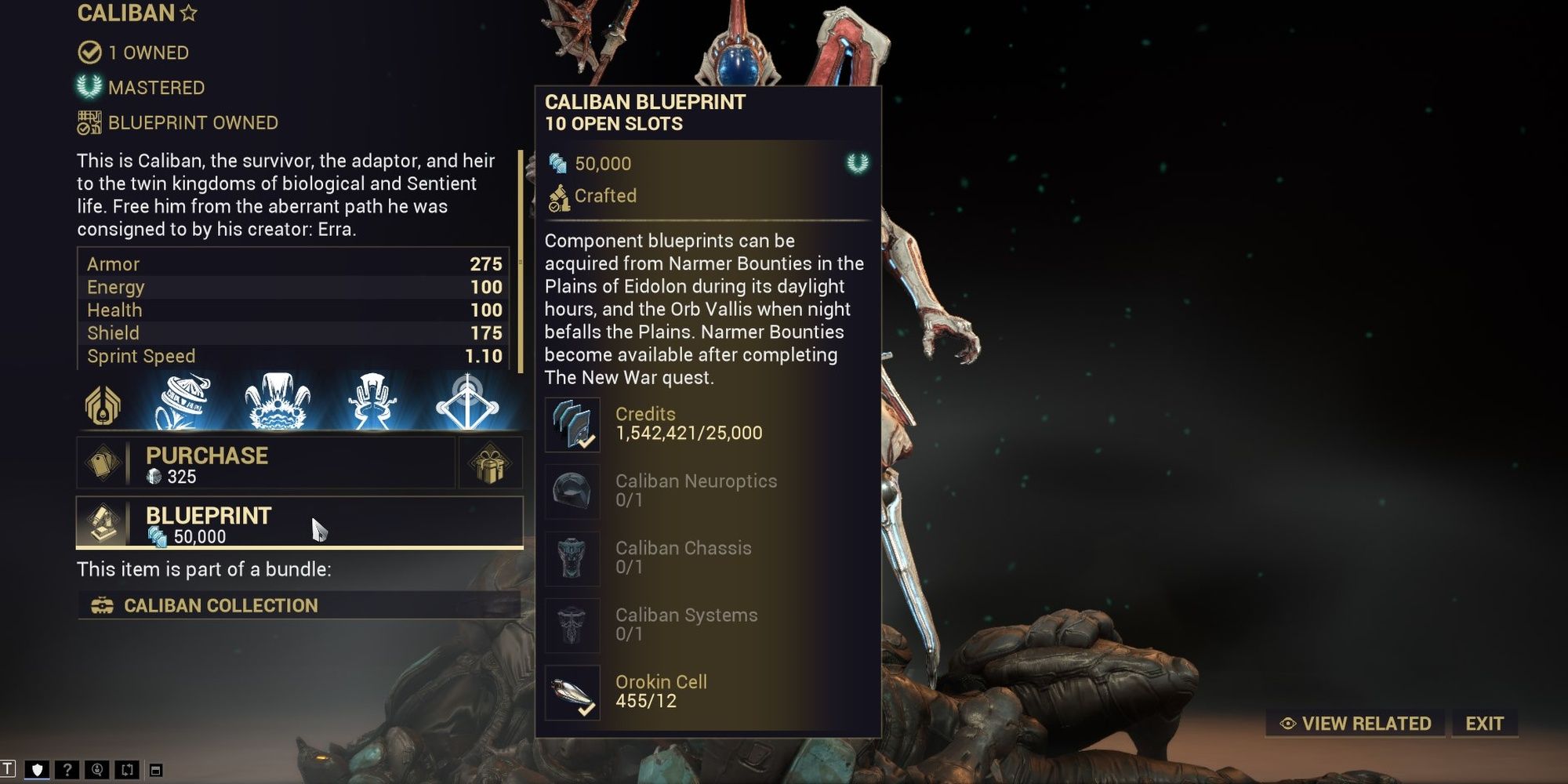 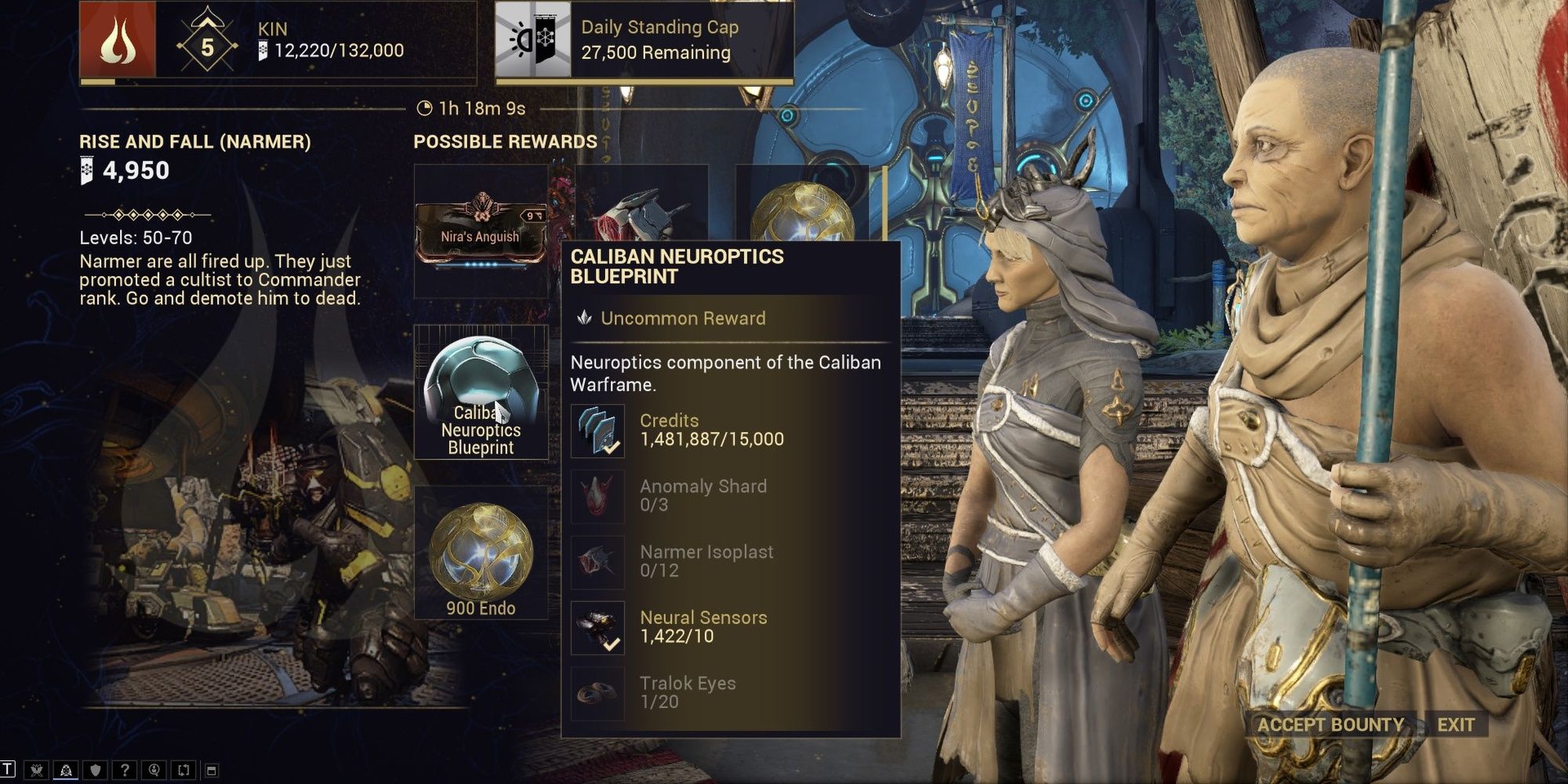 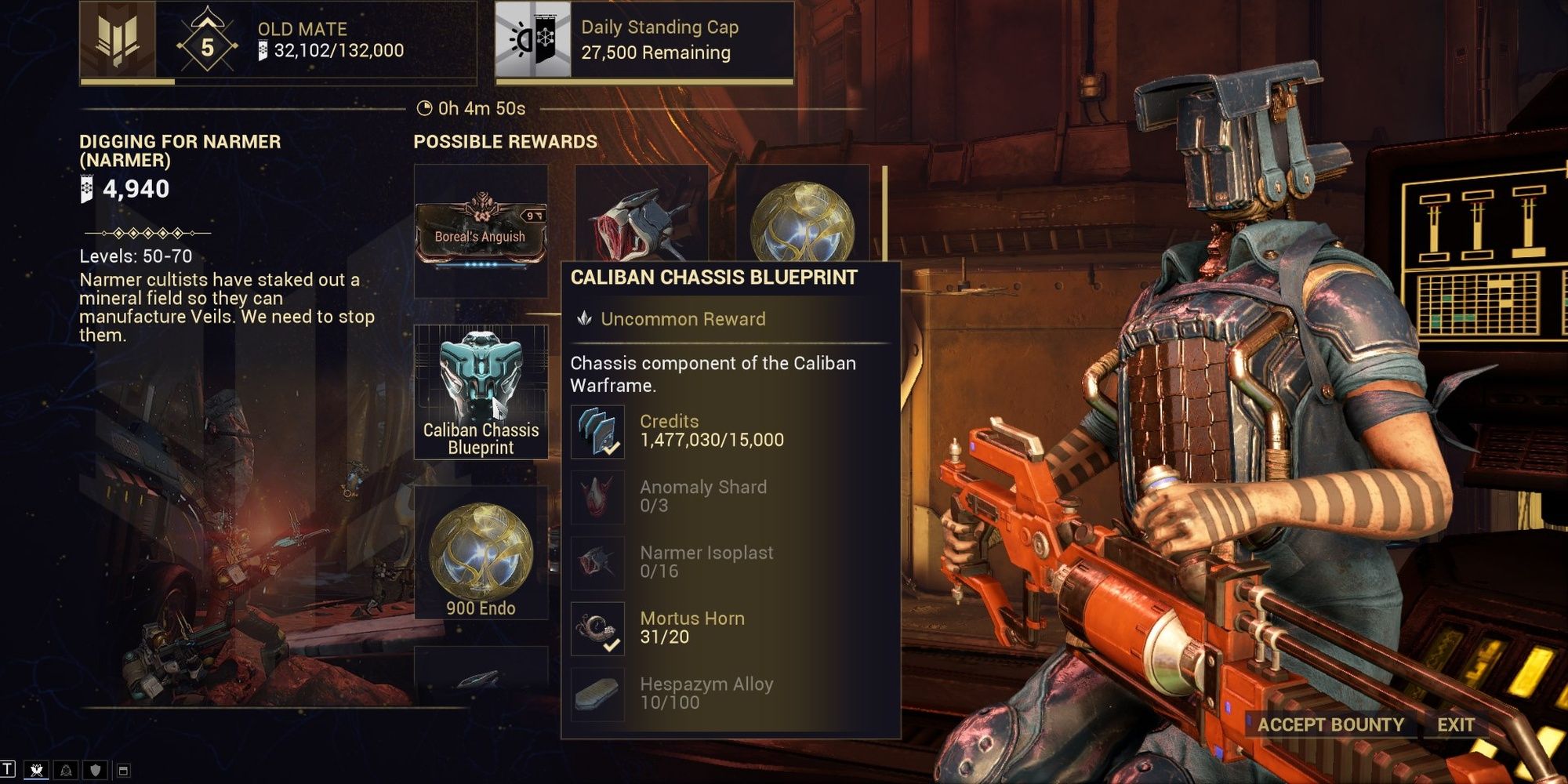 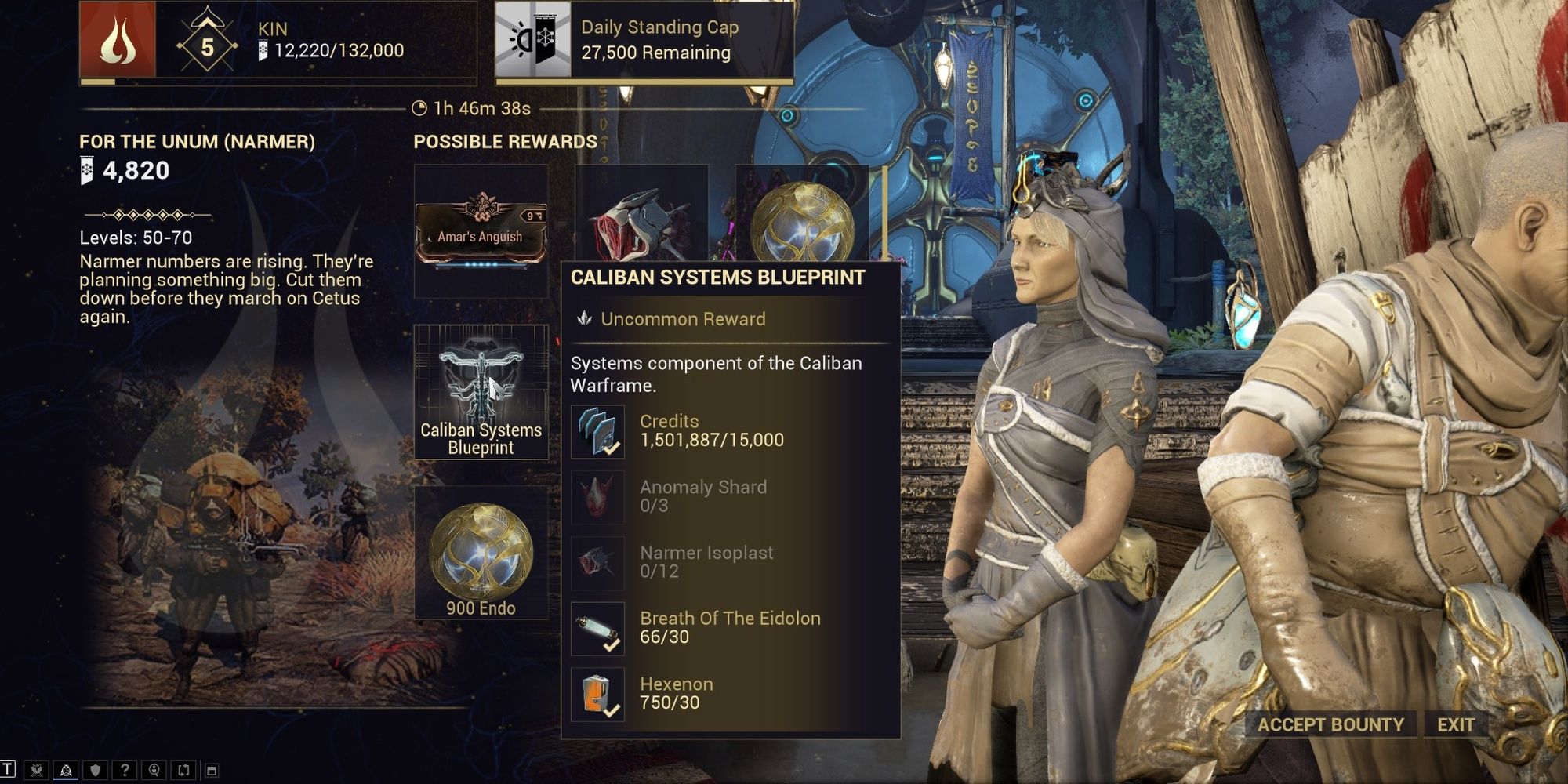 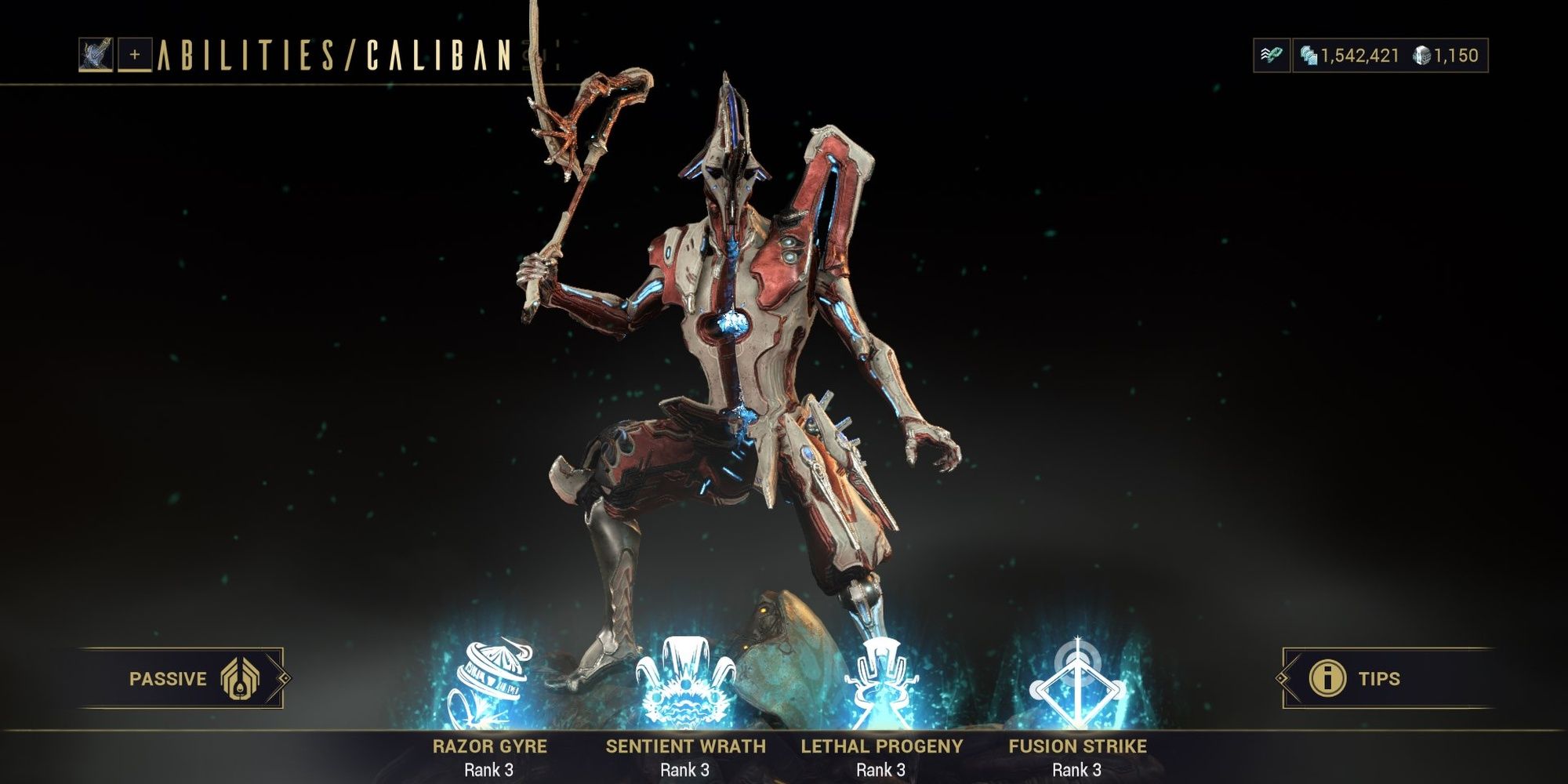 Passive: Allies within Affinity range gain up to 50% resistance to the types of damage they are currently taking.

This passive works exactly like the Adaptation Mod. Whenever you receive damage, the damage type that hit the hardest (for example, a Heavy Gunner's Gorgon rifle mostly does Impact) will be the damage type you'll start to resist. Caliban's passive increments in 5% intervals with each hit, capping out at 50% damage resistance. This effect is multiplicative with Adaptation, not additive.

Each player in your squad will track their own Adaptation stacks with this passive; they aren't shared across the party. Not taking damage for five seconds will cause the damage resistance to decay at a rate of about 4% per second. Taking damage will stop the decay effect. Should you wish to extend the range of Caliban's passive, use the Mending Unity passive from the Vazarin Focus school. 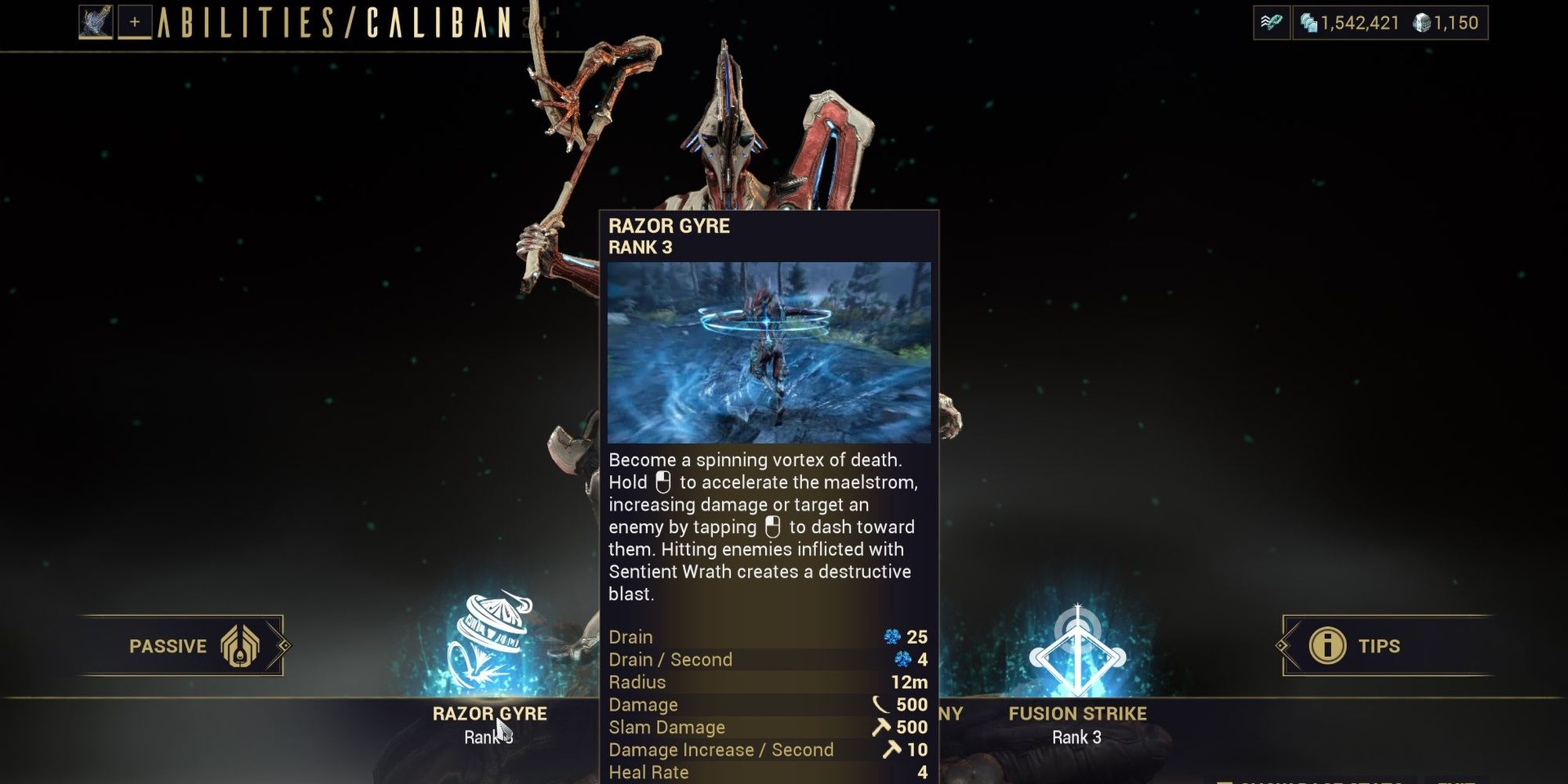 Razor Gyre: Become a spinning vortex of death. Hold [fire input] to accelerate the maelstrom, increasing damage or target an enemy by tapping [fire input] to dash toward them. Hitting enemies inflicted with Sentient Wrath creates a destructive blast.

Razor Gyre behaves similarly to Revenant's Dance Macabre ultimate, causing Caliban to spin in a circle while continuously draining Energy. Enemies near you will take constant Slash damage. While in this form, you can only strafe; sprinting, sliding, bullet jumping, and normal jumping are disabled. Pick-ups are also disabled, including Energy Orbs. To help Caliban navigate the arena, you can tap the fire input to ram into an enemy target up to 50 meters away. This range cannot be modded.

While in Razor Gyre, you can hold the fire input to charge the maelstrom, increasing the damage of your hits. Ramming into an enemy while charging Razor Gyre will consume all accumulated bonus damage to deliver a more damaging impact. The damage bonus you can receive from charging Razor Gyre is limitless. Each enemy hit while in this ability will also heal 4HP per enemy hit, affected by Power Strength Mods. You can only cast your second ability, Sentient Wrath, while in Razor Gyre. 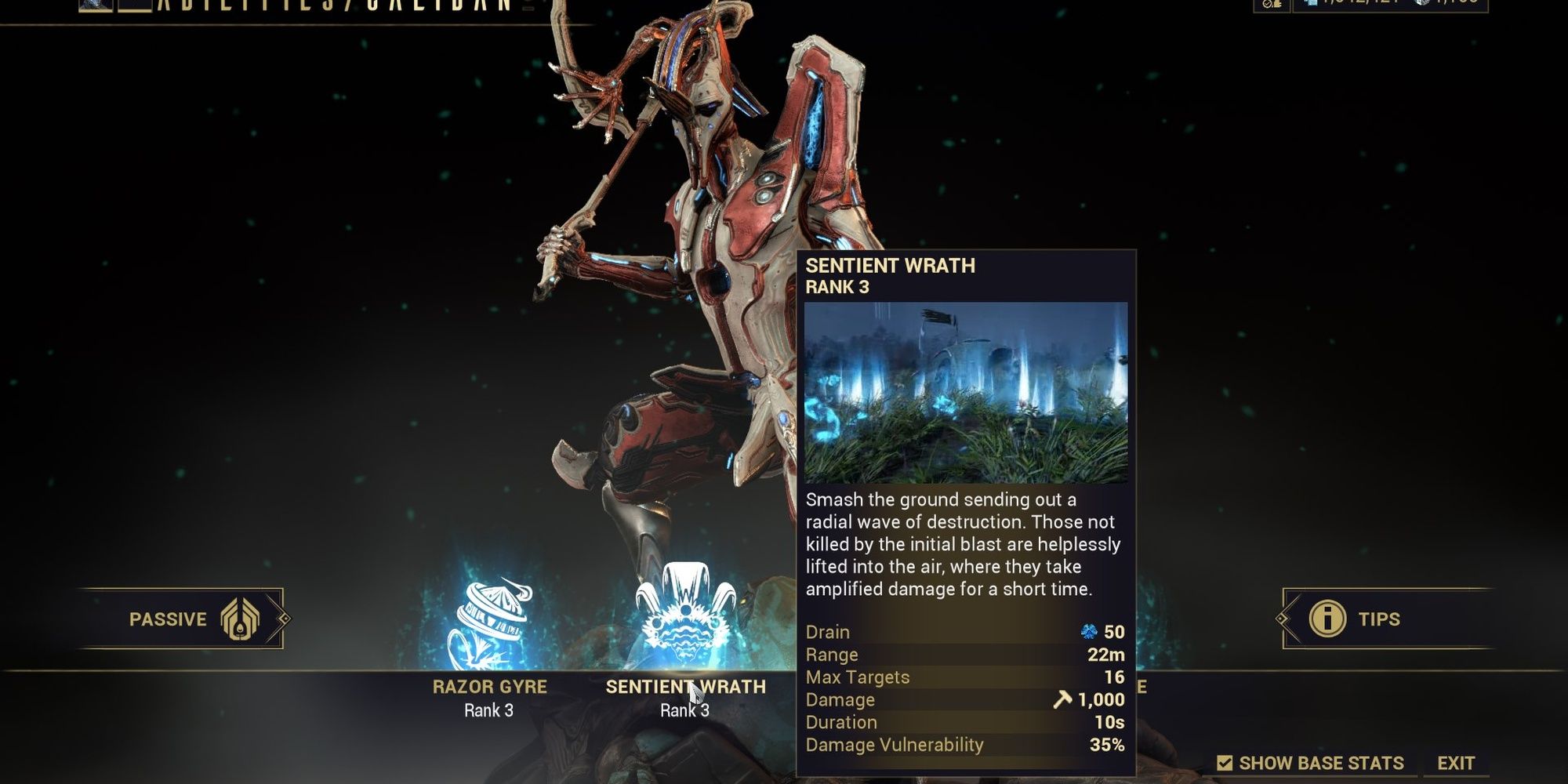 Sentient Wrath: Smash the ground sending out a radial wave of destruction. Those not killed by the initial blast are helplessly lifted into the air, where they take amplified damage for a short time.

Sentient Wrath acts as a hybrid between Rhino Stomp and Breach Surge, levitating enemies when hit and inflicting a 35% damage multiplier on them for a short time. This ability has a rather long cast time, expands to its listed AoE over a short period, and the enemies hit by Sentient Wrath are ragdolled when hit; they don't levitate in place like Rhino Stomp. Building this ability for Power Strength is recommended, allowing it to inflict a larger damage multiplier and more easily kill fodder enemies in low-level missions. Sentient Wrath can also be subsumed onto other Warframes, acting as a great means of crowd control that also amplifies your damage. 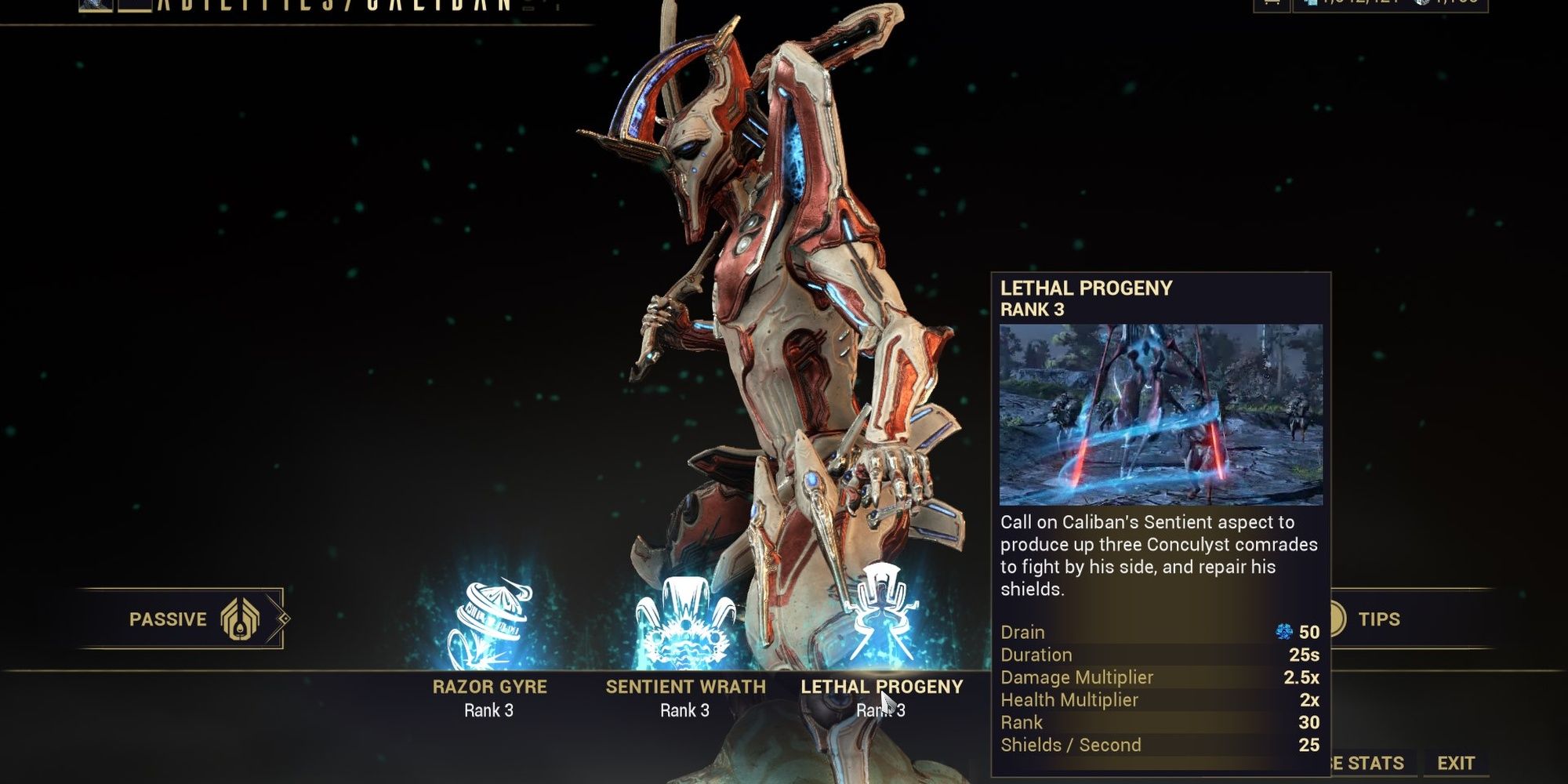 Lethal Progeny: Call on Caliban's Sentient aspect to produce up to three Conculyst comrades to fight by his side, and repair his shields.

Caliban's third ability calls down a Conculyst to your current location, acting as a companion that fights alongside you for a set duration. You can have up to three Conculysts summoned at a time. Each Conculyst has their own duration that cannot be refreshed. Your HUD will showcase the duration of the most recently summoned Conculyst.

The Conculyst minions function just like you'd expect. They will attack at melee range, use a cyclone ability to rapidly damage foes, and they take an immense amount of punishment—partly thanks to Caliban's passive. These AI minions are far tankier than most Warframe AI summons, although they aren't particularly smart. 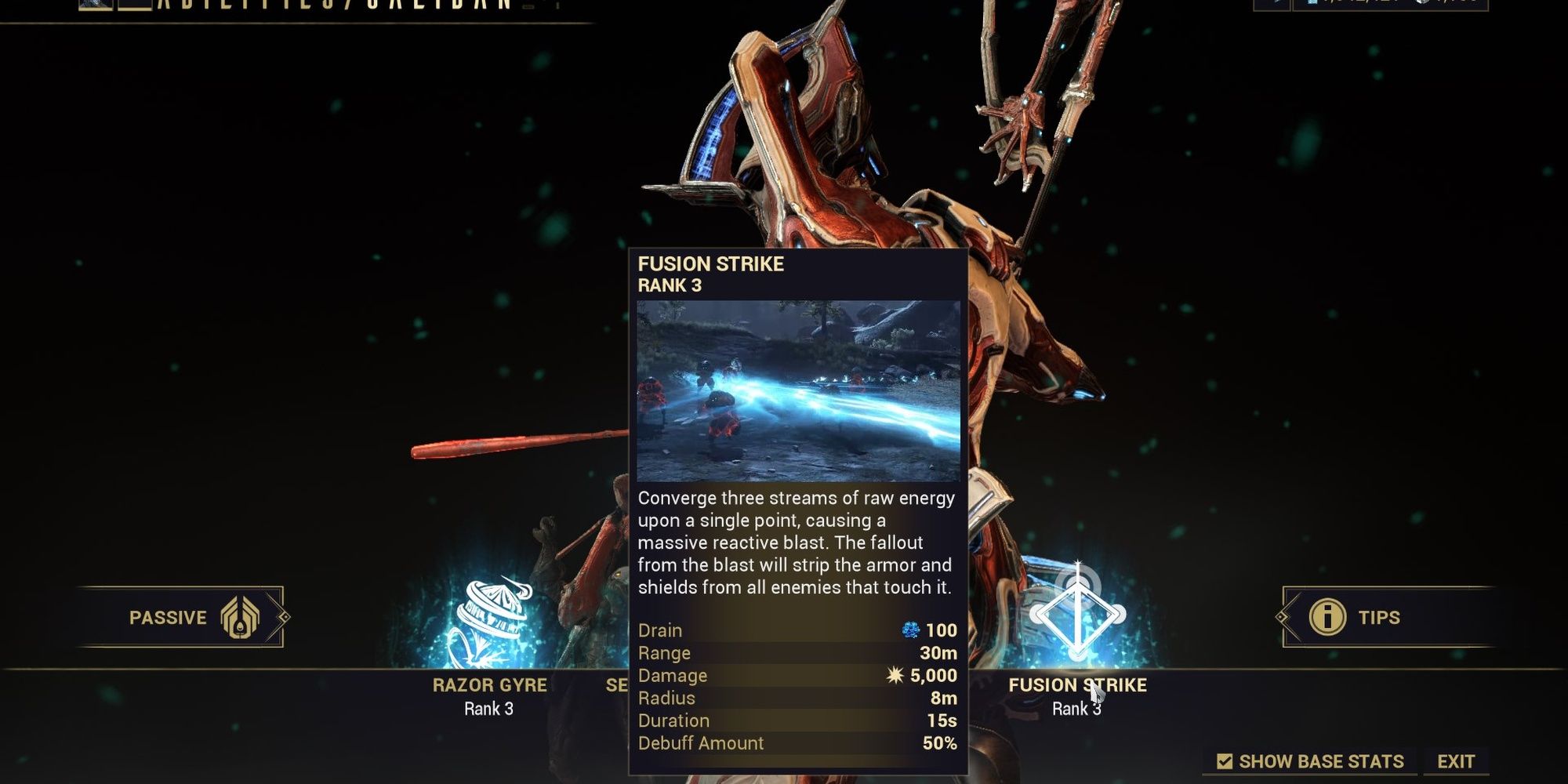 Fusion Strike: Converge three streams of raw energy upon a single point, causing a massive reactive blast. The fallout from the blast will strip the armor and shields from all enemies that touch it.

Fusion Strike anchors Caliban to the ground briefly, projecting three beams that intersect after a couple of seconds. When the beams converge, they explode, dealing 5,000 Blast damage while creating a lingering field that strips defenses by 50%. Enemies that get pulled into the lingering field will have their defenses stripped permanently as well. Power Strength modifies the damage dealt and defense strip, so it's highly recommended you achieve at least 200% Power Strength to take full advantage of this ability's defense strip. 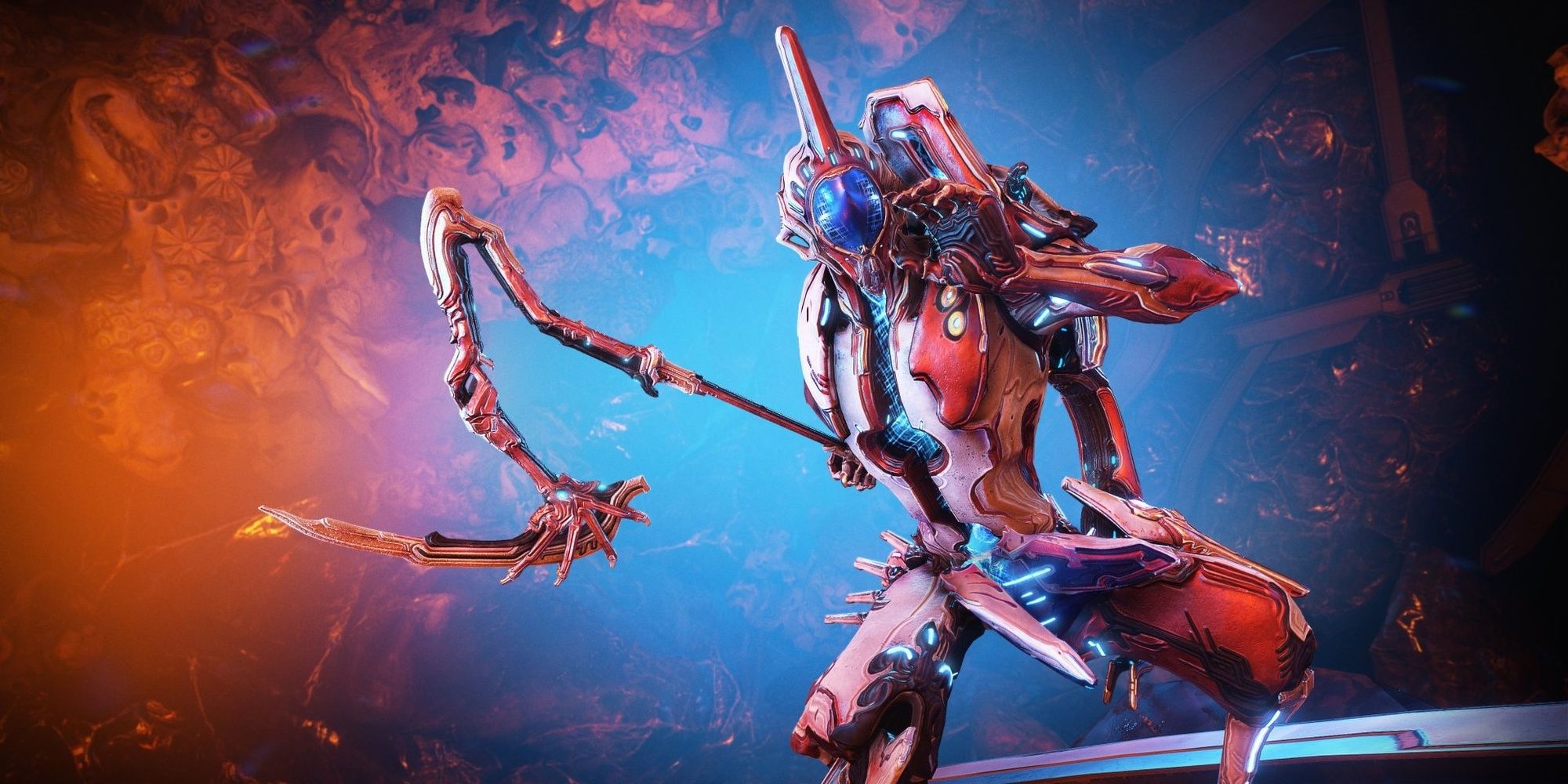 Caliban is a crowd control and damage hybrid, wanting to stun targets before unleashing a deadly blast with Fusion Strike. You'll want to build Caliban for Power Strength and some Efficiency. Range is also useful, although it's not a primary stat. Unfortunately, this means we'll need to dump Power Efficiency to optimize builds with Caliban, so consider running the Zenurik Focus School or, if you own it, Arcane Energize.

For survivability, Caliban has two choices:

Finally, subsumes on this Warframe should focus on crowd control. While Caliban does have a CC ability in his kit already, it ragdolls enemies and makes it difficult to take advantage of Fusion Strike's AoE damage and defense strip. Abilities like Larva and Ensnare work great with Caliban. Replace his Razor Gyre ability; it isn't very good. If you want a good replacement for Razor Gyre that's faithful to that ability's playstyle, use Yareli's Aquablades. 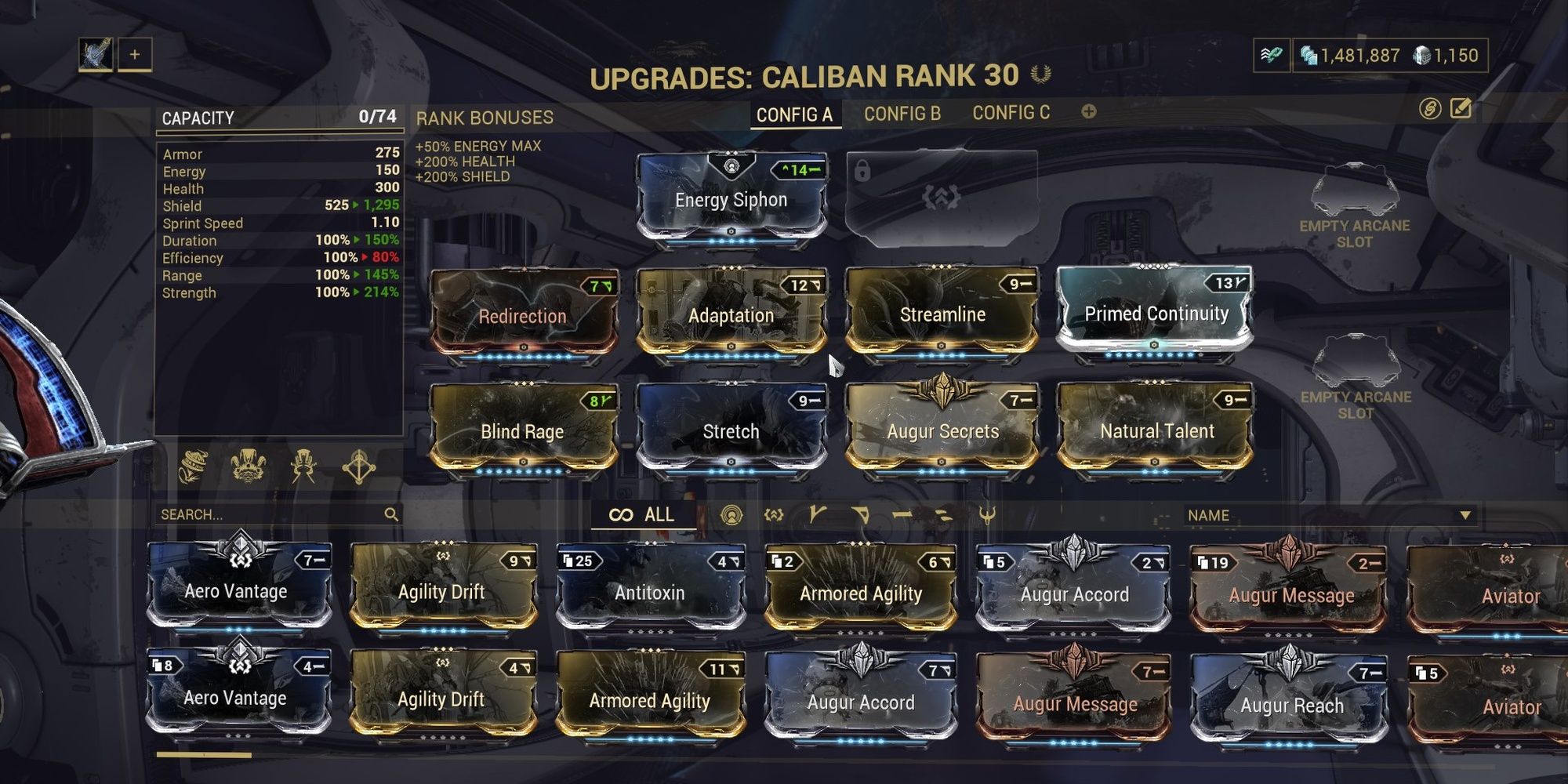 This build focuses on enhancing the damage and overall fluidity of Caliban's kit without making extensive alterations to him. You'll mostly be using your second and fourth abilities to stun targets, strip defenses, and deal solid damage. Your third ability will help recharge your shields and make building Adaptation stacks fairly easy. A focus on Power Strength will make your second and fourth abilities deal much more damage, apply stronger debuffs, and fully strip defenses. A little bit of Range and Duration go a long way to make your abilities more consistent. Natural Talent is needed for this build; it makes Fusion Strike charge faster and Sentient Wrath activate much sooner.

For Mod replacements, feel free to replace Primed Continuity with a non-Primed Continuity. If you don't own Augur Secrets, use a standard Continuity and replace Secrets with Intensify or Power Drift. Any Naramon (dash) polarity will work for this build; it doesn't have to be Energy Siphon.

Even with this setup, we recommend you don't use Razor Gyre except as a means of travel. Its damage is currently far too low to warrant using. 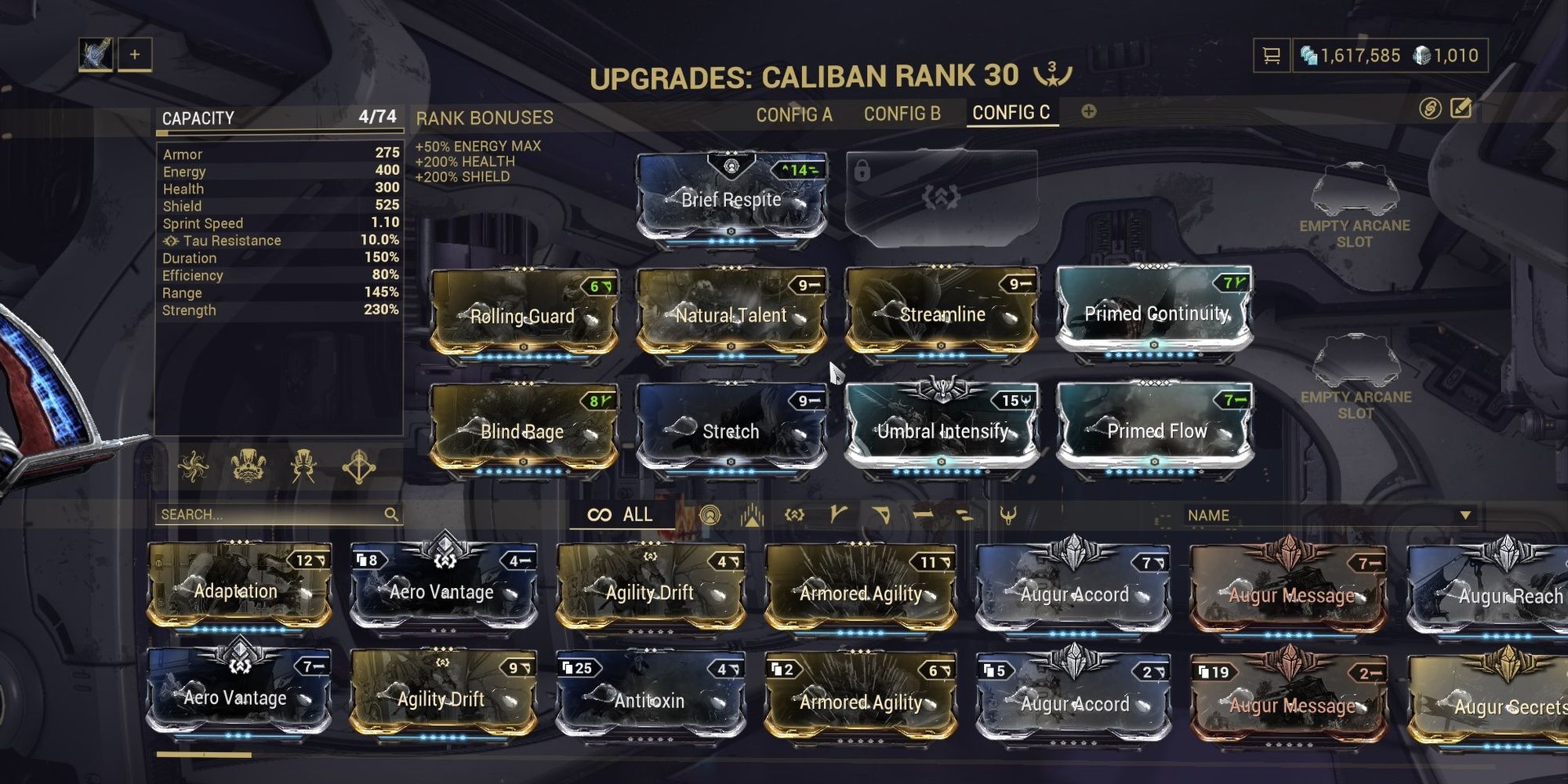 It might seem strange to use two crowd control abilities on Caliban, but his Sentient Wrath ability ragdolls enemy targets. We'll be using Larva, replacing Razor Gyre, to group enemies into a tight mass. You can then use Sentient Wrath to apply a massive damage multiplier, then use Fusion Strike to strip their armor. If they survive the blast, finish them off with your weapons or a second Fusion Strike. Rinse and repeat.

Lethal Progeny will play off Brief Respite and Rolling Guard to keep Caliban alive through shield gate resetting. Beyond that, this is very similar to the starter build. Focus on Strength to amplify your damage and defense strip. A little bit of Range and Duration will make your abilities feel more consistent, and the use of Natural Talent will make Caliban much more fluid to play. Finally, be sure you're using Primed Flow and some sort of Energy-generating effect to mitigate the negative Efficiency of this build. 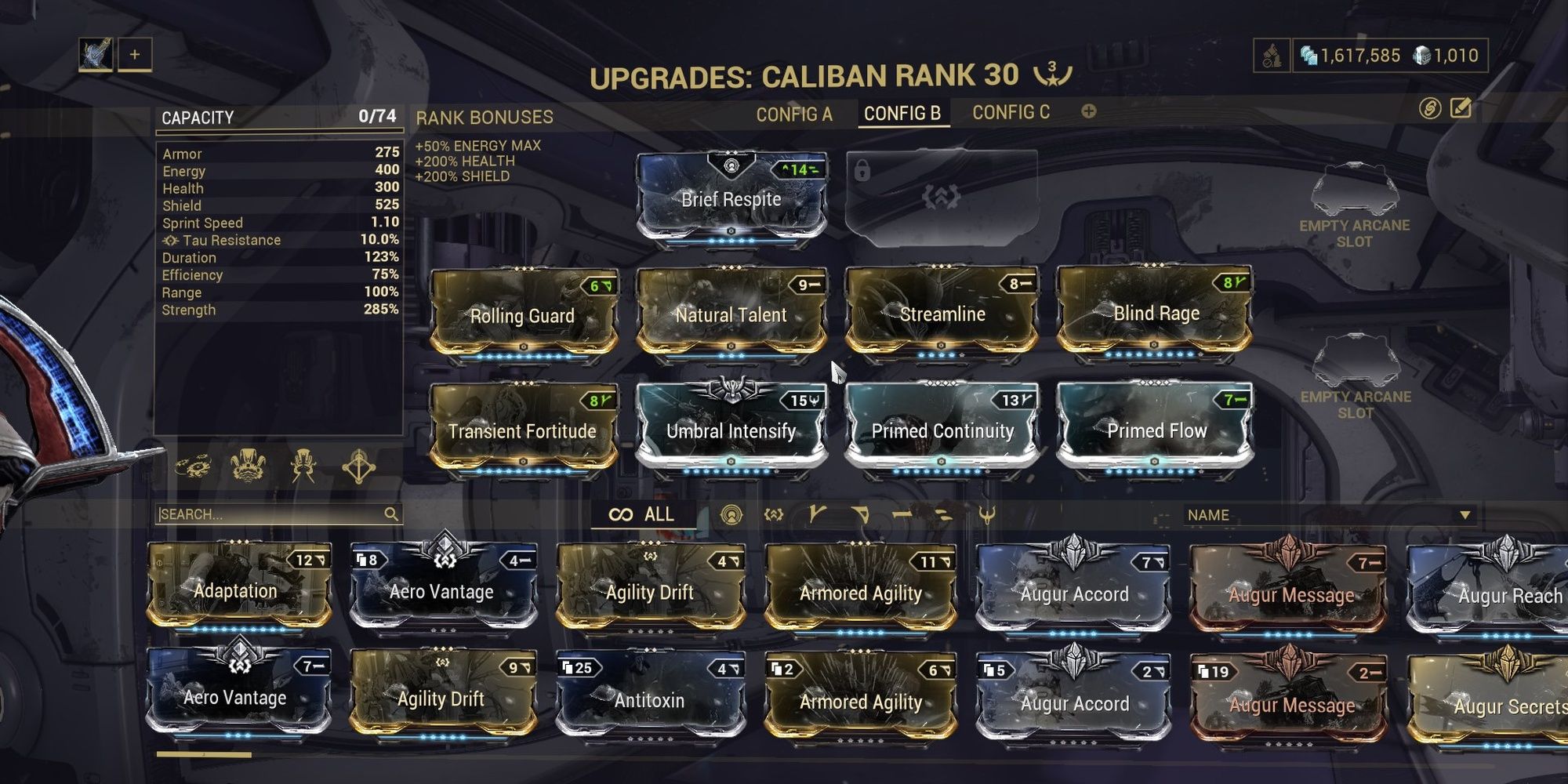 This is less of an endgame build and more of a fix to his kit. Razor Gyre just isn't a good ability in its current state, so we're going to be replacing it with Aquablades from Yareli. It's objectively better than Razor Gyre in almost every way. Compared to that ability, Aquablades:

Focus on Power Strength for this build, increasing your damage output while allowing you to strip 100% of a target's defenses with Fusion Strike. Beyond that, the foundation of this build is the same as the last two. Build up your other three stats slightly to enhance Caliban's other abilities, and be sure to frequently use your abilities to trigger Brief Respite.