Warframe is no stranger to unique weapons, ranging from plasma shotguns to fully-automatic explosive assault rifles. One category of weapons most forget to mention, however, are secondary weapons.

Most secondary weapons come with stronger mods than their primary counterparts, potentially making them stronger than primaries when modded correctly. Just like melee weapons or primaries, secondaries can come with interesting mechanics to set them apart from the rest. Some even let you add custom effects to them, such as gaining power strength on a kill or gaining infinite ammo. Here are 10 of the strongest secondary weapons you can use in Warframe. 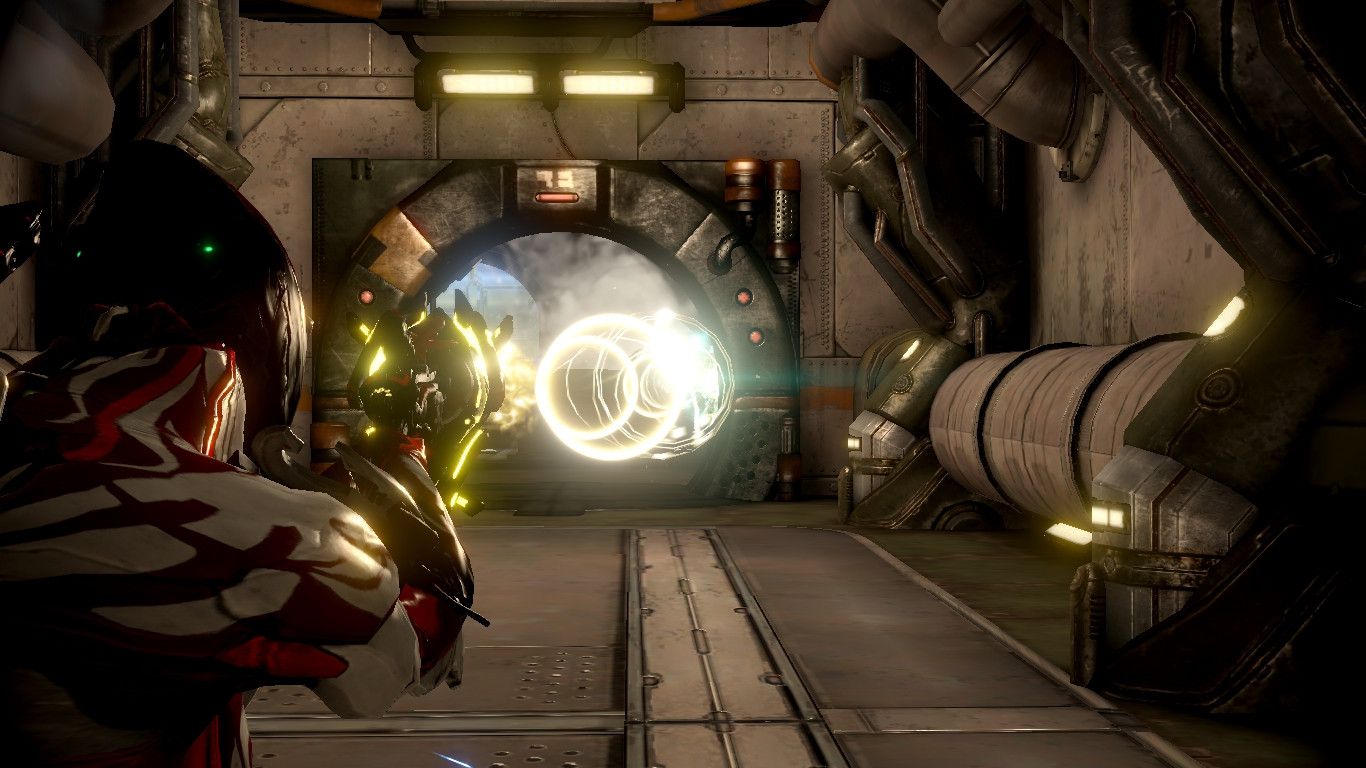 After beam weapons got changed quite a few patches ago, weapons like the Amprex and Nukor became significantly stronger than they already were.

The Nukor comes with a high amount of base radiation damage, dealing extra damage versus heavily armored targets like Bombards. Its absurd 4x critical multiplier is evened out with its measly 3% critical chance, but crafty players can use arcanes and Harrow to convert this already strong beam weapon into an absolute monster. Its high Riven disposition lets users get a critical multiplier over 10x if the right stats are modded onto the Nukor, making this one of the hardest hitting weapons in the game. 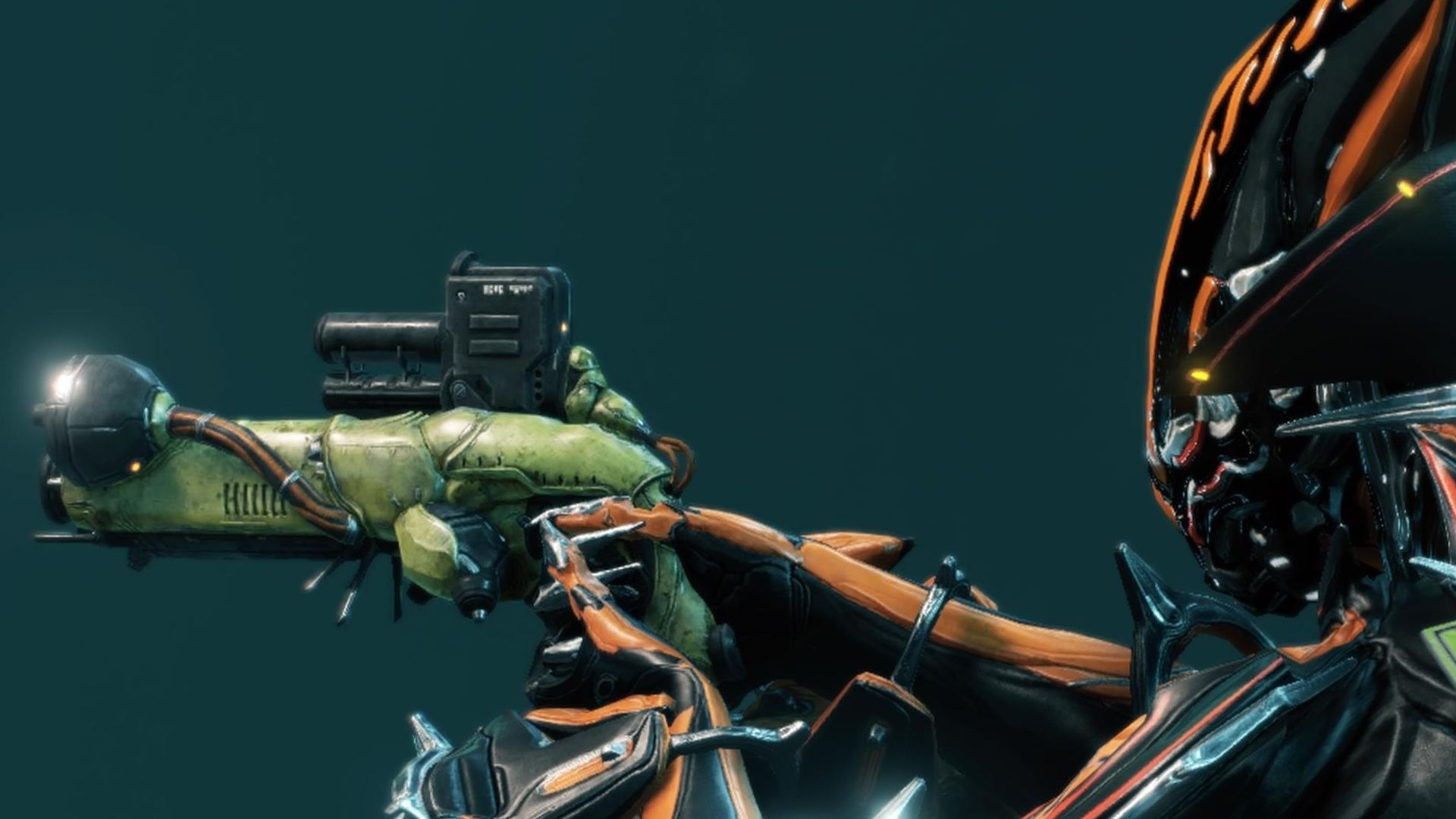 Note that this is the Kuva Kraken, not the default Kraken. The base Kraken is one of the worst weapons in a looter shooter, shooting marshmallows at enemies at a slow fire rate, backed with a relatively long reload.

Not only does the Kuva Kraken address all of these issues, but it also adds some new mechanics to make it more competitive in today’s meta. The Kuva Kraken can empty its entire magazine in an alternate fire, dealing ludicrous amounts of damage to any horde or tanky boss alike. Its two-round burst feature has been upgraded to a three-round burst, and its critical and status effects have been substantially buffed. This is a beast of a gun if you can pry one off of a Liches’ dead hands. 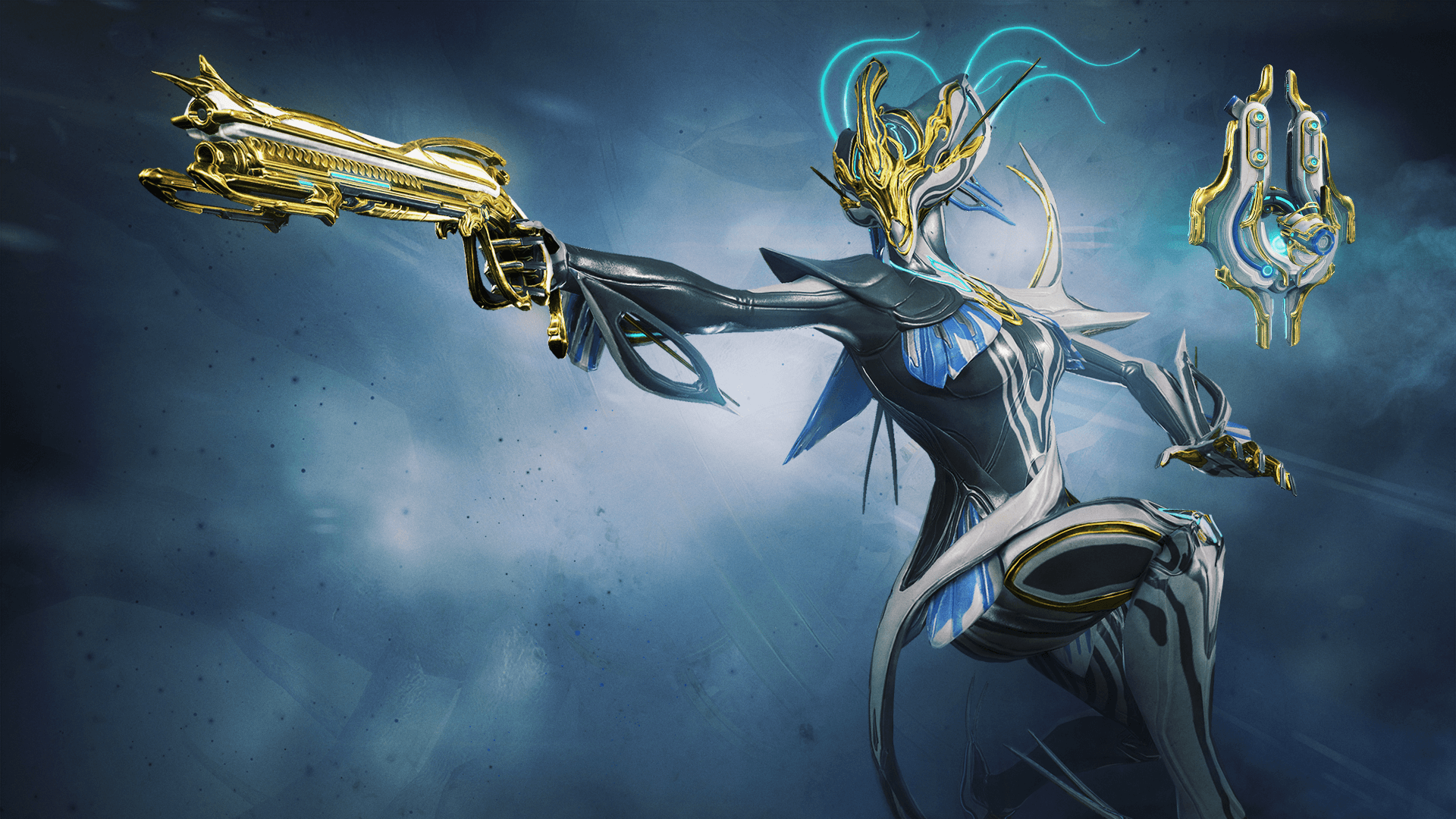 Do you need a shotgun for close-quarters engagements? What if you need to fight enemies at range as well? The Euphona Prime can do both at the same time with its special alternate fire.

The Euphona Prime fires a projectile slug that deals substantial damage, but its alternate fire is a shotgun blast that’s hitscan and has a high status chance. The slug is meant for critical builds while the shotgun is meant for status builds, so you can’t have it both ways on this gun unless you get an exceptional Riven mod for one. If you do, however, prepare to strip all of an enemy’s armor in a shotgun blast and follow it up with a devastating slug shot. 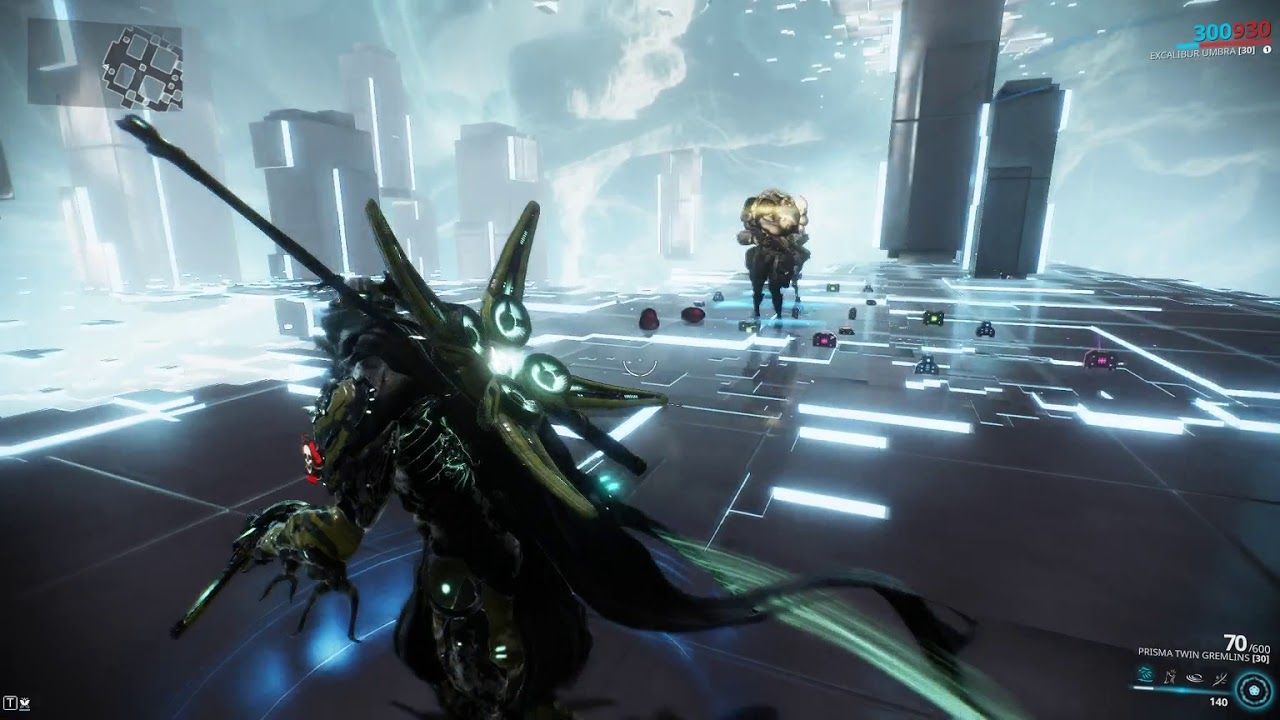 If precise aiming isn’t your speed, the Prisma Twin Gremlins are twin pistols that pin enemies to walls with fast-moving bolts as ammo.

These weapons can only be obtained from Baro Ki’Teer, a rare vendor that only appears in relays every other weekend. This weapon is worth the cost, however, as it comes with a high 23% critical chance without mods and a respectable 23% status chance. It might not hit as hard as other entries, but its ease of use and high Riven disposition help set this spray-and-pray weapon apart from the rest of its competition. 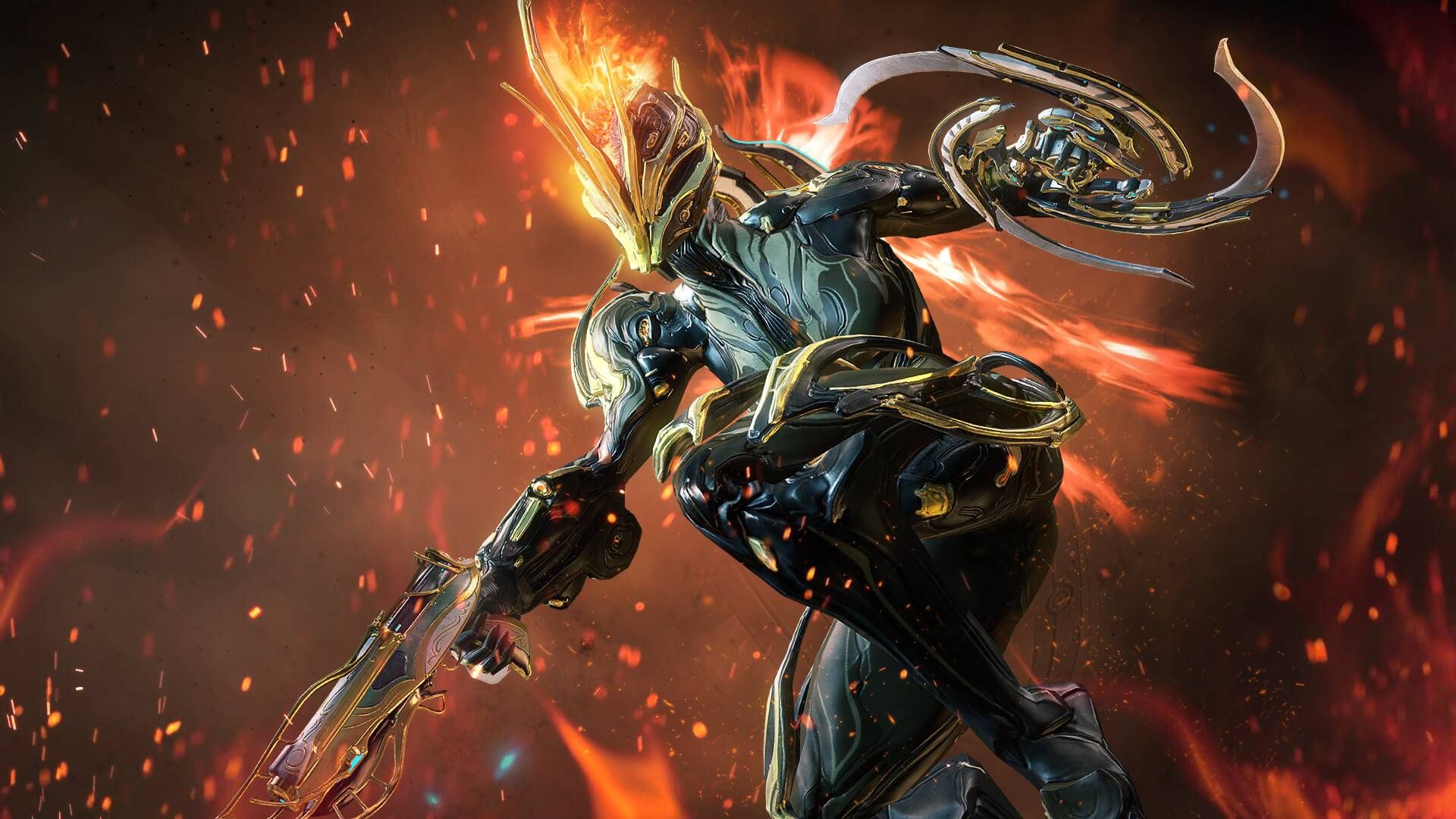 Unlike the Kuva Kraken, obtaining the Sicarus Prime doesn’t require absurd luck to obtain. This weapon comes from relic packs, just like nearly every other Prime item in Warframe.

50 damage per shot, 25% critical and status chance, topped with a fast 3 round burst make the Sicarus Prime an absolute beast. If punch through is installed on this gun, it can tear through entire crowds in a single burst. Bosses melt under the strong critical and status effects it causes, and it is a very beautiful gun to boot. This is arguably the best burst weapon in the game, beating out most primary weapons. 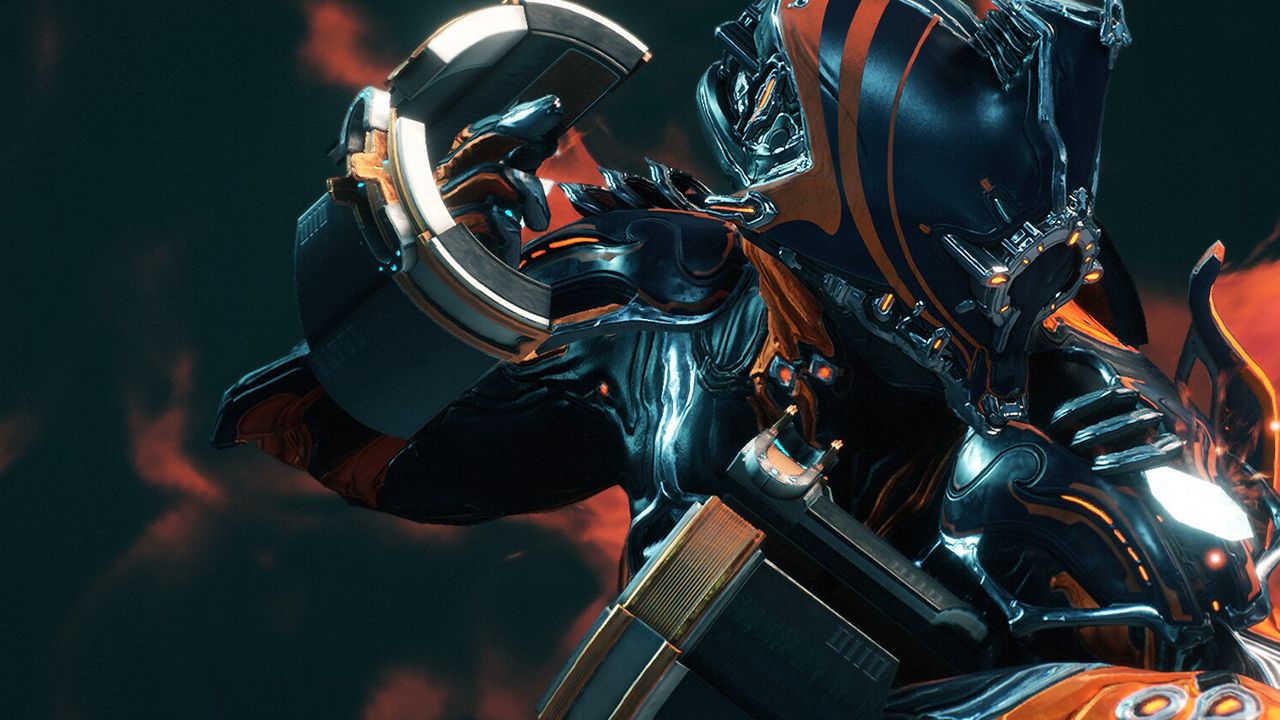 Clan weapons can be rather hit or miss in this game, either being strong compliments to your arsenal or complete Mastery fodder. Fortunately, the Staticor firmly sits in the former category.

The best way to describe this gun is it shoots radioactive fireballs at enemies. These bolts can be charged to deal more damage in a much wider radius. This is also one of the few AoE weapons in Warframe that deals no self-damage, meaning you can shoot this thing to your heart’s content without worrying about blowing yourself up. Don’t bother getting a Riven for this thing as its disposition is low. It doesn’t need a Riven anyway because of how solid all of its stats are. 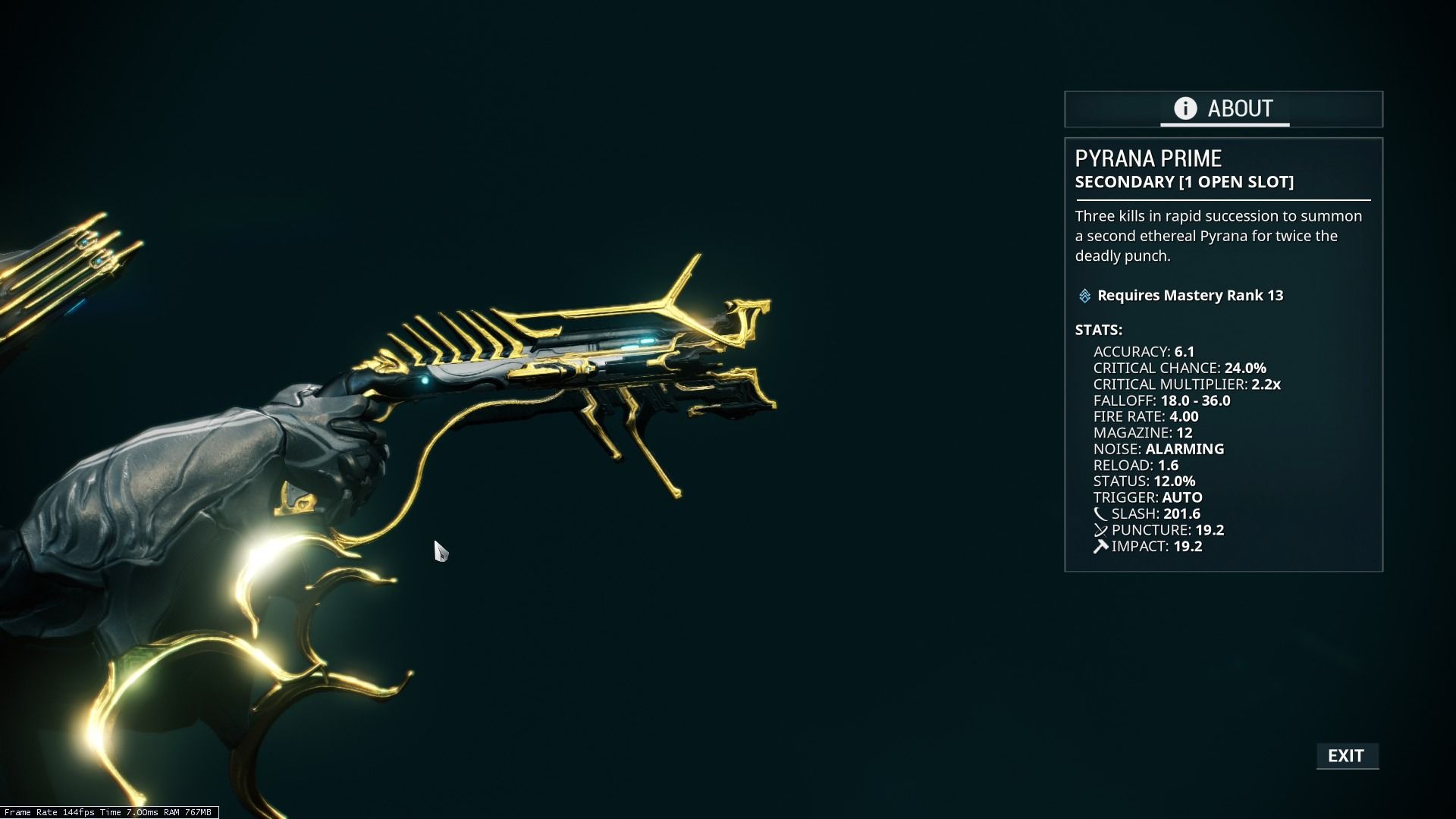 Honestly, the last four entries here are nearly interchangeable with each other. All of these weapons fulfill the same purpose: kill everything on your screen as fast as possible. These weapons do it the fastest.

The Pyrana Prime, provided the enemy isn’t well armored, is the strongest gun in the game. Because armor is such a large problem, however, this gun significantly falls off in endurance missions. This fully-automatic shotgun creates a copy of itself in your other hand when you get a triple kill, turning into an akimbo variant for a few seconds. Its base stats are already amazing, but when the akimbo version is summoned you get double fire rate and magazine capacity. This weapon is the definition of insanity. 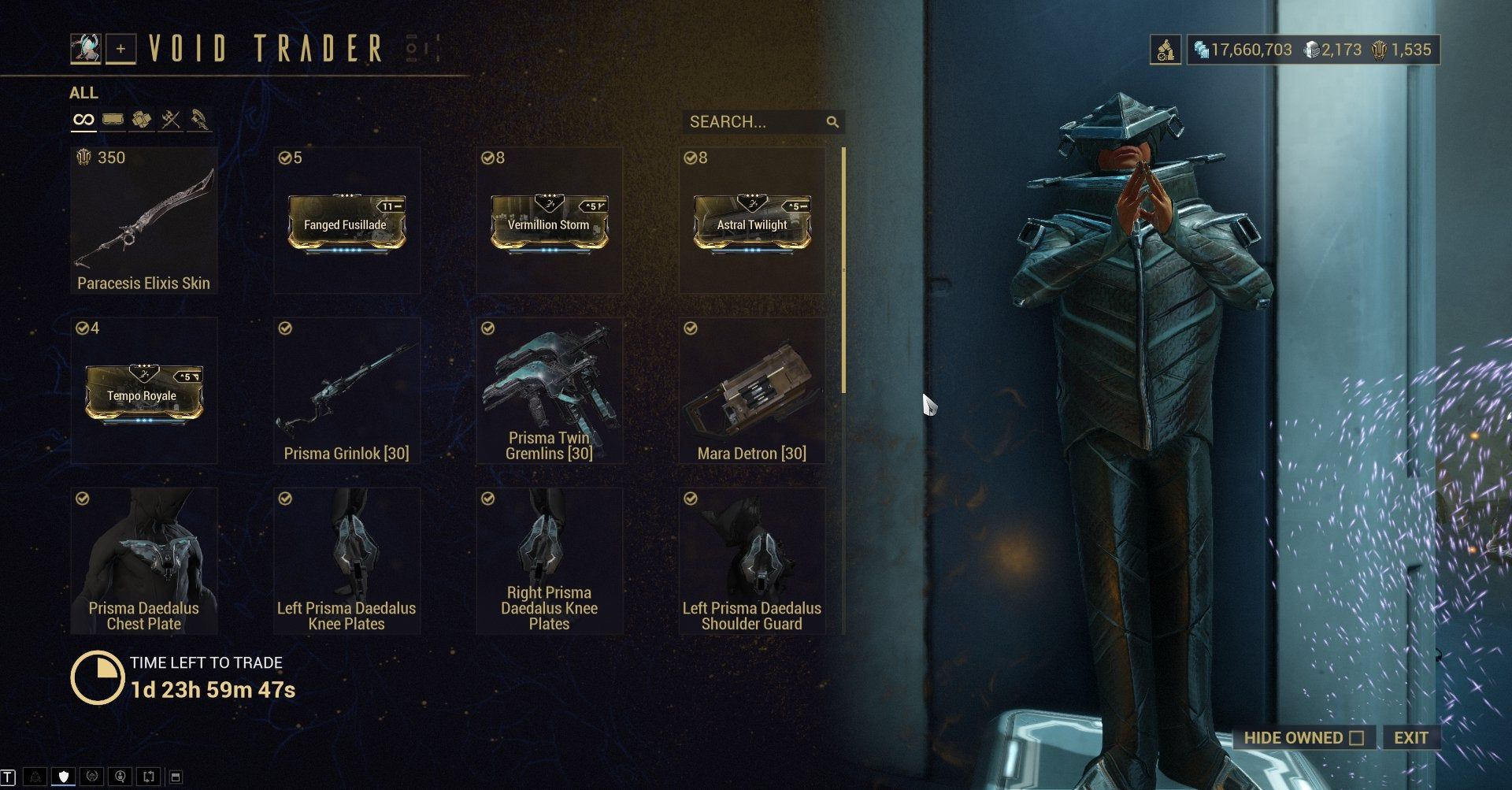 The Mara Detron might not bring the same pure destructive power that the Pyrana does, but what it lacks in fire rate it makes up for in its status chance.

Similar to the Tigris Prime and other fantastic primaries, the Mara Detron is a projectile gun that can reach 100% status chance if modded properly—causing every pellet to cause a status effect. With corrosive on this gun, it can strip armor in a couple of shots. Combined with its base radiation damage, the Mara Detron is the best solution against armored targets you could ask for. 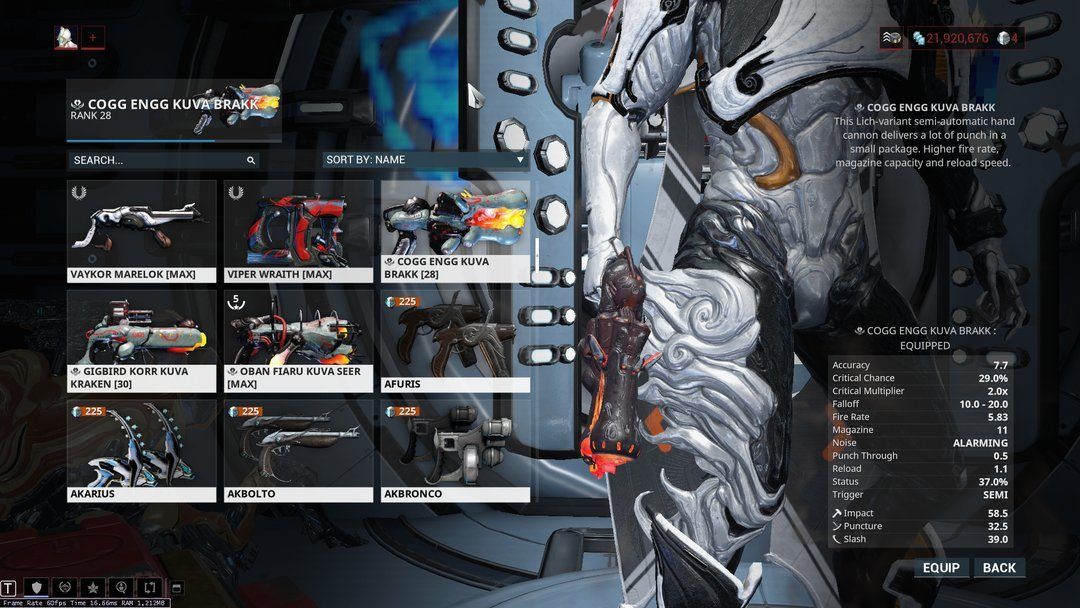 Combine the Mara Detron’s status chance with the Pyrana’s insane damage potential and you get the Kuva Brakk. It is no coincidence most of the best guns in this game are shotguns.

High base damage, great critical stats, and the ability to reach 100% status chance are all part of this gun. Unlike the previous weapons, however, the Kuva Brakk comes with innate punch through and the ability to gain a bonus damage type based on the Warframe your Lich died to first. Its downsides are its very RNG based way of obtaining it and its rather significant damage falloff at range. 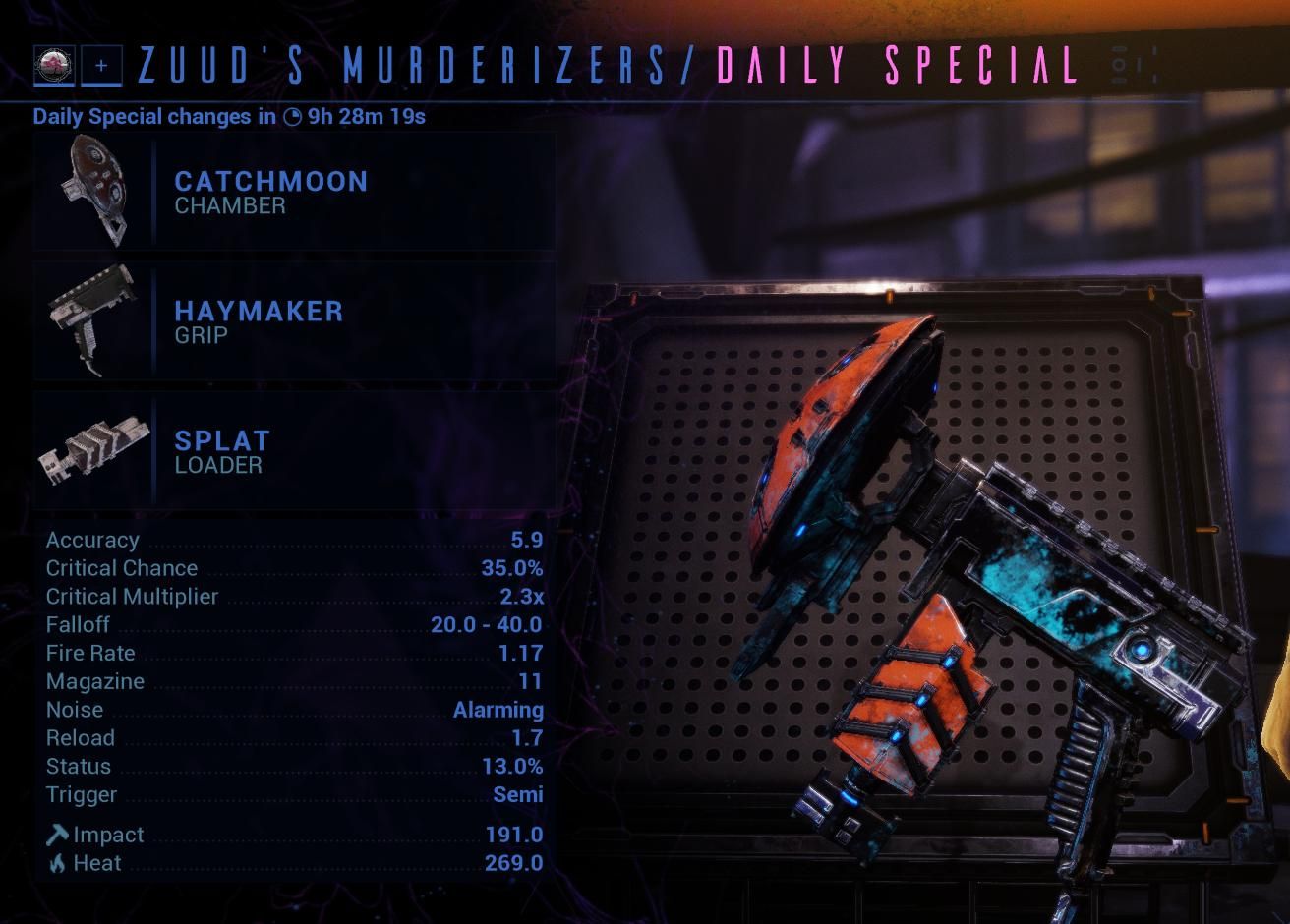 Putting Kitguns is somewhat cheating as they are a weapon category, but every single Kitgun except Gaze barrels are so powerful that they deserve to be bundled together. Otherwise, this whole list would be Kitgun combinations.

Regardless, Kitguns come with high base damage, elemental damage intrinsically, and high stats in whatever you choose when you craft them. Best of all, Kitguns can use exclusive arcane mods that grant them infinite ammo, heat-seeking nanites on precision kills or granting power strength on kill. These guns are even stronger with well rolled Riven mods, making Kitguns the uncontested king of secondaries in all of Warframe.