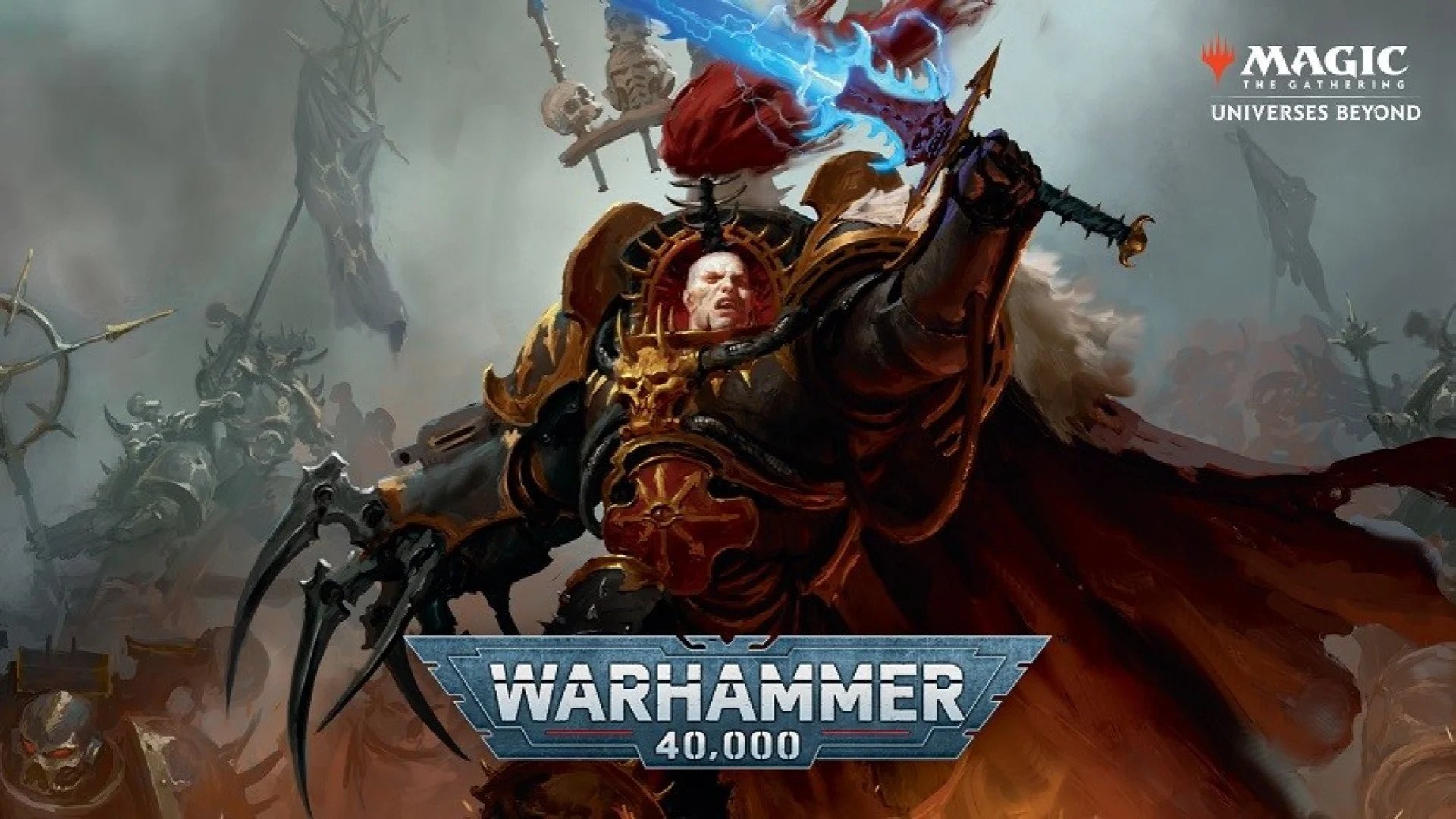 The Magic: The Gathering and Warhammer 40,000 universes have combined into a new set of trading cards that should please fans of both.

If you haven’t got room to set up a full-scale Warhammer battle in your living room, Magic: The Gathering now has you covered with its new Warhammer 40,000 Universes Beyond cards. It may seem an odd combination, but Magic: The Gathering has been doing a lot of pop culture team-ups lately and now two of the biggest names in tabletop gaming are becoming one.

The Universes Beyond line of cards is set to feature many more outside franchises in the future, including The Lord Of The Rings and The Walking Dead, but Warhammer is a surprisingly easy fit, since it is already filled with role-playing stats and a passionate fanbase that shouldn’t have any trouble adapting to the rules of the card game. You may enjoy the works of Tolkien and have never played a tabletop game before, but that probably isn’t the case for Warhammer fans.

We looked at the Street Fighter Secret Lair cards a few months ago and were impressed by the Magic: The Gathering artists’ unique rendering of some of our favourite fighters. There’s even more lore and characters to draw from with Warhammer 40,000 and so while the crossover is basically just a giant expansion, that you can play with your existing Magic: The Gathering cards, it’s also a great jumping on point for both franchises.

The crossover starts with four 100-card commander decks featuring brand new cards with familiar faces, including everything from ordinary Space Marines to daemons like The Great Unclean One. These commander decks are similar to a starter set, so you don’t need anything else to play, and cost between £40 and £60. The other benefit of the commander decks is that you know exactly what cards you’re getting, so there’s no chance you’ll get unlucky and end up with doubles.

Both companies are known for their amazing artwork and Magic: The Gathering makes a point of employing some of the best fantasy artists in the world. However, more than 20% of the card art in the crossover is existing Warhammer 40,000 work, which is a bit disappointing as this could have been a chance to try a totally new artistic take on the Warhammer universe. Given how expensive the sets are, there are no doubt plenty of fans who won’t take kindly to paying out for a bunch of images they might already own in one way or another.

Still, existing pieces, such as John Blanche’s Rembrandt-esque vision of the Emperor’s corpse on the imperial throne, look fantastic and mean these cards are suitable not just for the gaming table but could easily end up on your living room wall. Every collector will be keen to get their hands on the foil cards with golden, textured borders, which will be exclusively available in the Collector’s Edition versions of the commander decks – although inevitability they’re more expensive than the standard ones.

The whole range is detailed on the official website, but Amazon is selling the four basic sets for between £37.37 and £59.98, with a special £209.01 bundle that includes all four.

But how will Games Workshop’s existing tabletop lore and famously complex stats and movement measurements translate into card game mechanics? It’s inevitably a bit of fudge but that is half the fun of a crossover…

What powers your deck in Magic: The Gathering are Land cards, and this includes some stunning examples of terrain from the 40K universe, such as Crumbling Necropolis, Arcane Sanctum (home to the Emperor), and Choked Estuary. These locations might seem unremittingly grim but don’t worry, there’s always a Tranquil Cove for respite or a deep space port where you might regain some life. These cards are so handsome they could even act as a colour guide for painting scenery, before your next miniatures outing.

There are four factions available in the crossover – Imperials, Necrons, Chaos, and Tyranids – and these have been matched to four of the default colours from Magic: The Gathering (white, black, red, and green) with adaptions to suit the tabletop playstyle of the miniatures game.

Probably the best bet for white is the Forces of the Imperium Commander Deck, and as usual the vast armies of the Imperium act as cannon fodder for the Emperor. They are led in battle by commanders Inquisitor Greyfax and Marneus Calgar. Inquisitor Greyfax in on the hunt for heresy and she cuts a stylish swathe in her steampunk ensemble, but she’s not as powerful as Marneus Calgar and his Double Strike ability. Sacrifice is what powers this deck, which the Emperor would approve of.

Like something straight out of the Terminator, the ancient androids of the Necron Dynasties are represented by the black deck, with powerful artifact synergies and the ability for you to recycle cards from the graveyard to the call of ‘Behold the glory of undying’. This impressively powerful deck is led by commanders Szarekh, The Silent King and Imotekh the Stormlord who reward you for using the graveyard as a game mechanic with cards like ‘Out of the Tombs’.

Everyone loves a bit of chaos, and the Ruinous Powers red deck is full of new cards, including Chaos Space Marines led by commander Abaddon the Despoiler and his Mark of Chaos Ascendant ability. There’s also a host of daemons led by fan favourite commander Be’lakor, The Dark Master. Future Balrog, as I like to call him, is a legendary creature and demon noble that gives this cascade-based deck a suitable on-brand Warhammer feel.

The Tyranid Swarm is represented by the green deck and are led by Magus Lucea Kane and The Swarmlord, who grows creatures over time. The Tyranids are a mixture of locusts and dinosaurs, by way of H. R. Geiger, and gain victory by swarming over the battlefield with combo engine cards such as Hardened Scales, which offer infinite damage combos. This aggressive deck has some great cards, such as Screamer Killer and Winged Hive Tyrant, that are also a good place to start for new players.

Warhammer fans will love seeing cards with familiar exaltations such as ‘Blood for the Blood God!’ and events that are the basis for the rich and vivid lore of the franchise, such as Exterminatus, the planet killing command that is basically the Death Star moment for Warhammer.

Magic The Gathering (and Dungeons & Dragons) publisher Wizards of the Coast have the finances and scope to explore third party IP such as Warhammer and The Lord of the Rings, and as the 30th anniversary of Magic: The Gathering approaches there’s plenty of other compelling content in the works, including an already revealed 30th anniversary Secret Lair countdown calendar, to be opened like an advent calendar during December.

For true fans and aficionados, the insanely rare and powerful card Black Lotus, is being reprinted in a set that will set you back over £1,000 but that’s a steal as the original was just brought by Post Malone for $800,000. Which is worth remembering when you’re balking over the cost of the Warhammer 40,000 decks.