Vermintide 2's Grail Knight DLC provides several new options for Markus Kruber. The most impressive of these is, of course, the Grail Knight Career itself. A stark departure from the mercenary's other options, the Grail Knight gives up ranged capability entirely for devastating melee attacks and powerful party-wide buffs.

With so many exciting options, it's easy to get distracted by all the Grail Knight has to offer. By focusing on his role as the party's primary monster-killer, you'll be able to maximize Kruber's effectiveness once you've taken the Grail Vow. 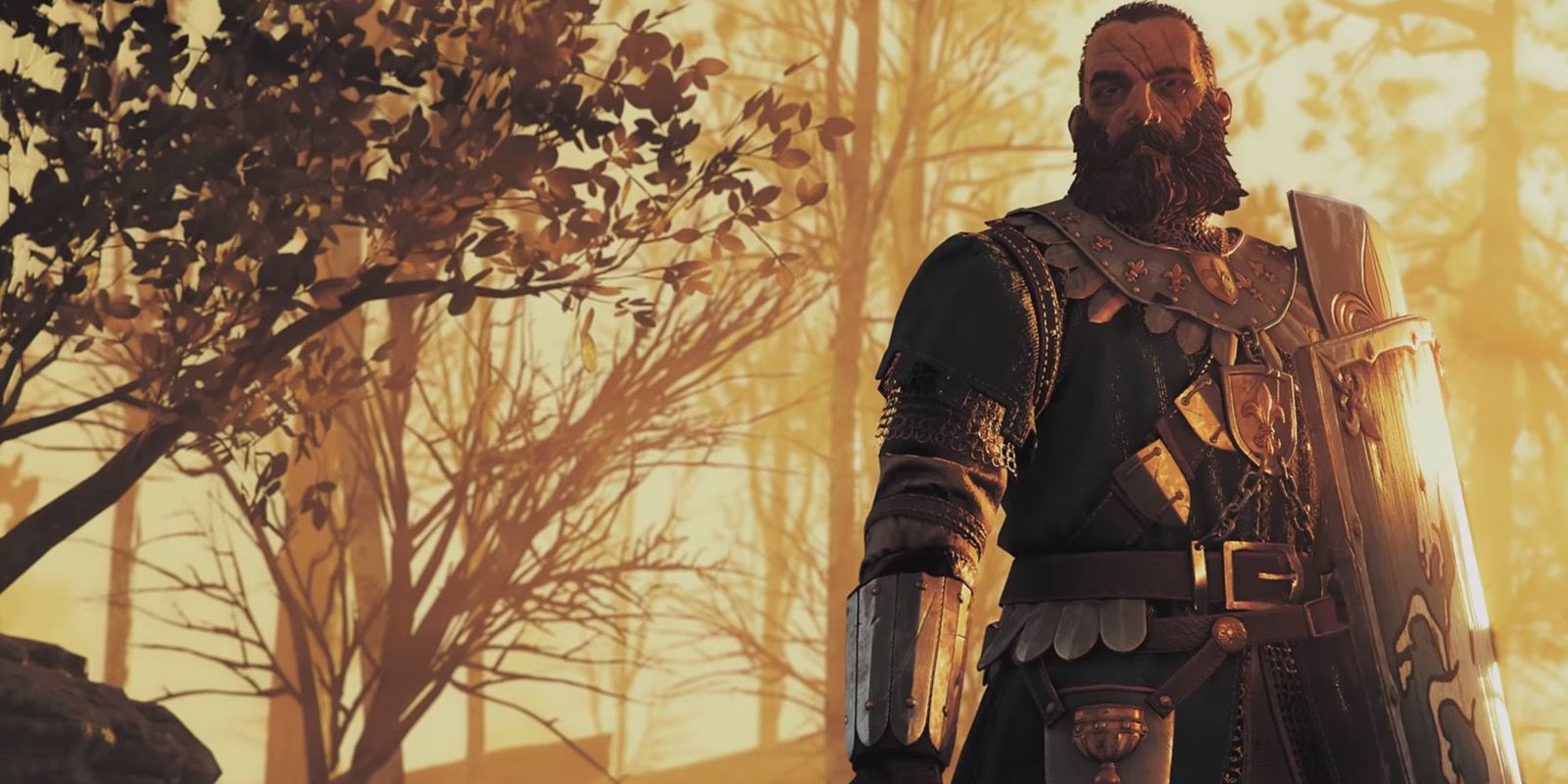 Oddly, the Grail Knight's most prominent feature isn't its most powerful. Whenever the party begins a mission with a Grail Knight on the team, they receive two randomly-selected Duties – sub-objectives to complete for a bonus that remains in place until they return to the Keep.

While this is certainly a major benefit, it's impossible to know until the mission begins what blessings you stand to earn. As such, Duties are best thought of as a bonus rather than a reason to play a Grail Knight.

Monster Hunting As A Grail Knight

The Grail Knight is one of the game's best Careers for killing elite enemies, monsters, and Lords. He receives a damage boost against the first enemy hit with each attack as well as a movement speed buff, permanent passive buffs, and his Blessed Blade deals massive damage whenever it is used.

Combined with a high hit point maximum and a quick cooldown for Blessed Blade, the best build for this Career centers on ignoring the rabble and rushing straight for the biggest bad guy in sight.

Most Careers can equip shields, but the Grail Knight has a unique and game-changing use for them. As long as he has a shield equipped, the Grail Knight can block and negate the flame attacks of Warpfire Throwers. The value of being able to protect yourself and your teammates from this devastating weapon can't be overstated.

As such, a Grail Knight should always have a shield in at least one of their weapon slots. If your best available weapon is a two-hander or just doesn't include a shield, you can always bring a shield in your secondary slot.

Remember, this Career can't use ranged weapons so there won't be much competition for the slot. 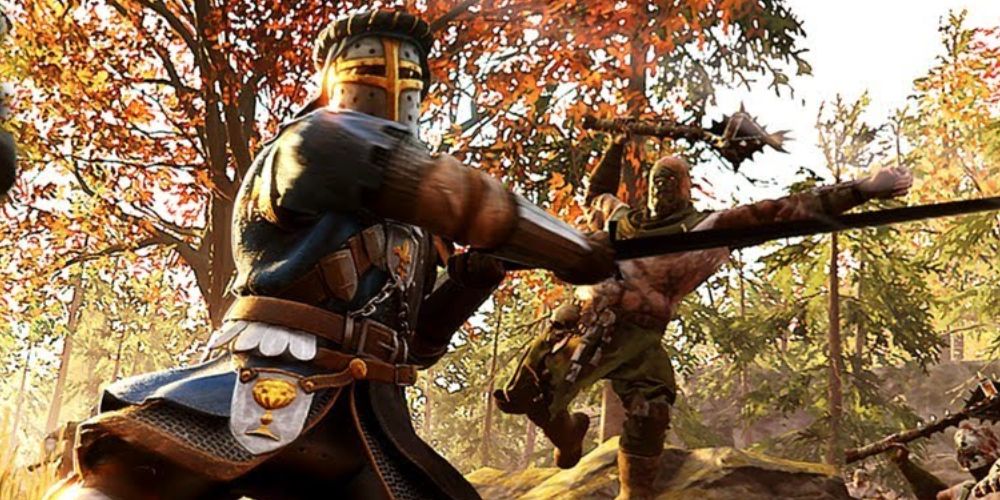 As a Grail Knight, you'll be doing most of the heavy lifting when it comes to larger enemies. For this reason, Lady's Wrath is the best choice from the Level five options. It grants temporary hit points based on the health of enemies you slay, and your primary targets will have very large health pools indeed.

Lady's Generosity and Gift of the Grail don't come close in terms of return on investment when compared to Lady's Wrath.

In most cases, Virtue of the Ideal is the best option here – cut down a few Skaven as you move towards your main target and you'll arrive with up to a thirty-percent boost to your attack power. However, if you have allies who grant boosts to critical hit rate like the Witch Hunter Captain, you might consider the Virtue of Knightly Temper as it can potentially let you kill tough foes faster in a prolonged battle.

Virtue of Heroism doesn't stack up against Virtue of the Ideal; while Heroism gives a flat bonus, it only applies to heavy attacks and therefore favors two-handed weapons. Virtue of the Ideal, on the other hand, provides a larger bonus for only a little extra work and works well with any weapon or attack type.

Of the available options at Level 15, Smiter is the ideal choice for a Grail Knight. It guarantees a Stagger on the first enemy hit with each attack. Not only does this pair well with the damage boost you'll receive from Knight's Challenge against the same enemy, but it also means you can Stagger even the toughest foes regardless of your weapon type. You'll be able to deal extra damage while the creature recovers, and you'll save yourself a couple of seconds' worth of attacks from it as well.

There is plenty of debate about which of the Grail Knight's Level 20 Talents is the best. They all enhance the Duties available to the party significantly. Virtue of Purity enhances the bonus received from completing Duties, but since the available objectives are randomized this is a less useful option.

Of the other two choices, it's largely a matter of player preference; Virtue of the Penitent is a popular choice since it unlocks a repeatable Duty that provides extra Potions of Strength. This is a huge benefit on higher difficulty levels where resources can be scarce towards the end of a mission.

Virtue of Duty, on the other hand, causes a third objective to be selected for each mission, potentially granting even more buffs if all Duties are completed. We would argue that Virtue of Duty is just slightly better than Virtue of the Penitent since it increases the likelihood that powerful blessings like the Power boost from Slay Elites will be available.

The Grail Knight doesn't want to waste time cutting his way through hordes of minions to reach his target. Virtue of the Joust fixes this problem by making him able to push almost anyone out of his way. If your party has plenty of crowd control options to clear a path for you, the Virtue of Discipline will vastly improve your effectiveness in battle against your elite foes.

If you time your blocks perfectly, it grants a massive twenty-percent boost to your Power. The Virtue of Stoicism isn't quite up to par with the other two Talents at this level; if you need the temporary hit points it refunds, you're probably in trouble anyway.

Virtue of Confidence is the best choice for most situations at the maximum level. It changes Blessed Blade into a horizontal slash, allowing you to cut down groups of enemies even if they include Stormvermin or Chaos Warriors. It also combos with Virtue of the Ideal, usually getting you the full bonus in one swing.

If your team is relying on you exclusively to fight monsters, the Virtue of Audacity gives Blessed Blade an extra strike that should help finish large enemies quickly. Virtue of the Impetuous Knight only grants a movement bonus, and only then if you kill an enemy with Blessed Blade – you're much better off with one of the other options here.