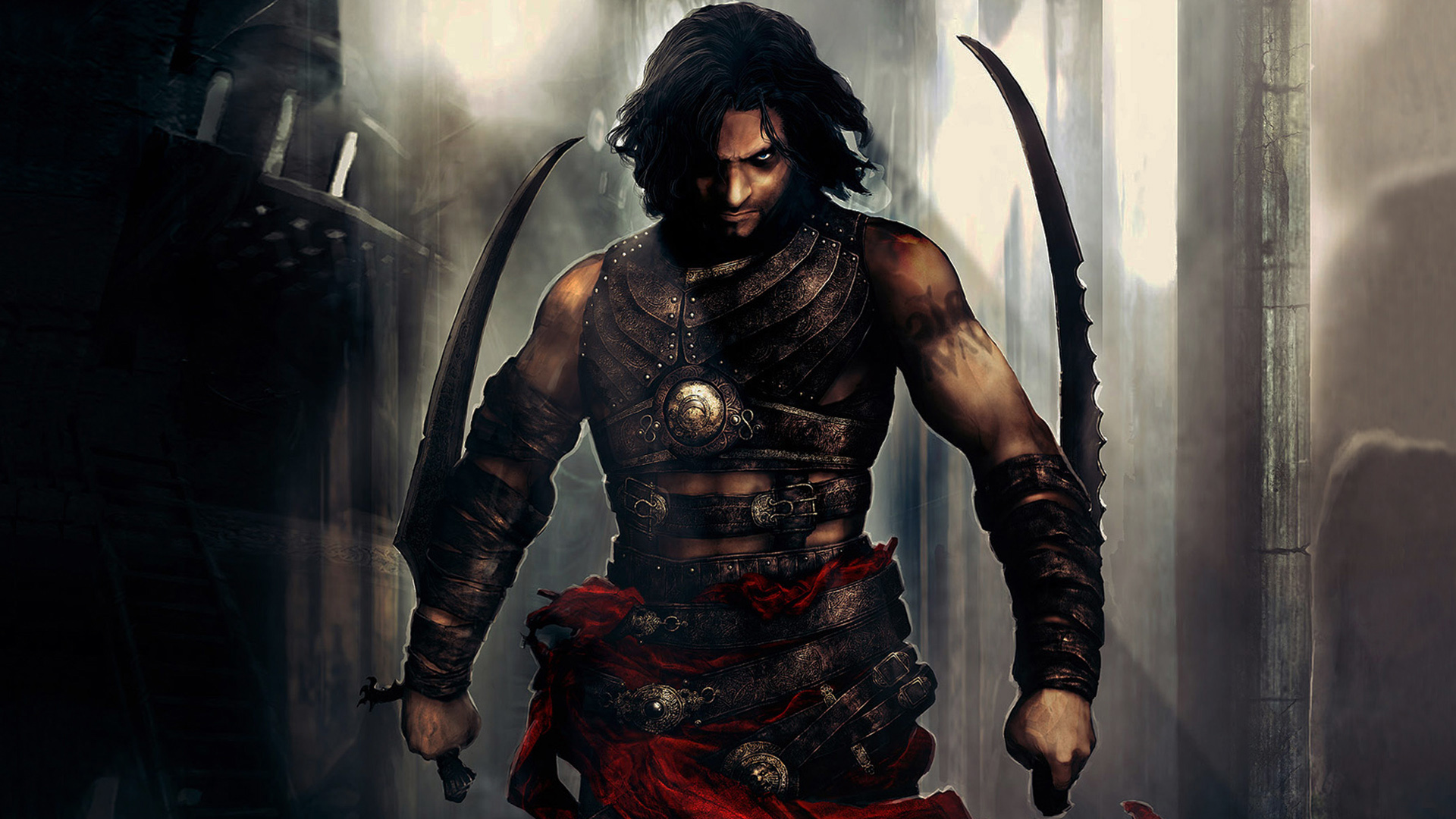 The subject for this week’s Hot Topic was suggested by reader Dory. It involved games that are thought to be terrible but that you like, ones that are considered mediocre, or even something that’s acknowledged to be good but you think is even better.

We had lots of difference suggestions in each category, but the most common answers were No Man’s Sky and games as a service titles like Fallout 76 and Sea Of Thieves.

Worthy warrior
I think that Prince Of Persia: Warrior Within has a bit of an unfair reputation as being a dark, moody, and generally unworthy sequel to The Sands Of Time.

I think it kept what was enjoyable about The Sands Of Time, which for me was using the Prince’s agility to pull off and chain together awesome acrobatic moves, kind of like a non-super Spider-Man. Whilst at the same time, it fixed what is in my mind the only problem with The Sands Of Time, which was the sub-par and repetitive combat. There was also more of an exploration element, with a choice in which order you tackled the Mechanical and Garden Towers, and it added some great chase/escape scenes.

There probably wasn’t any need for the Prince’s personality and the game world to be so dark – from memory, the overriding visual tones of the game were mainly grey, compared to the original’s sandy-gold and azure blue. But I didn’t come for the scenery or the Prince’s posh accent, I came to enjoy the gymnastics and acrobatics, and here it definitely didn’t disappoint.

And Ubisoft did at least acknowledge that no one liked the Prince in this game, and that he had a completely different personality than from the first game, by making the Dark Prince part of the Prince’s split personality and the final challenge to overcome in the last game of the trilogy.
Julian

All the ingredients
Great Hot Topic this weekend. I’ve spent time thinking about all the games I’ve played over the years and one stands out to me as unfairly maligned. I’m always shocked at how poorly thought of Zelda: Skyward Sword is. For me it was the best Zelda experience I’ve had since Ocarina Of Time. I missed it on the Wii and only got round to playing it on the Wii U, so had missed a lot of the negative thinking around it and was able to play without any preconceived notions, which I think may have coloured some other opinions.

For me it contains the real ingredients of the Zelda experience: great dungeons, interesting characters, and none of the wandering around aimlessly that Breath Of The Wild was so clearly pleased with itself about.

On the subject of Breath Of The Wild, the more I think of it the more I’d say I had the opposite experience with it. Overly hyped and just full of pointlessness. It’s made me realise how much more I appreciate linear games as I’ve got older actually, so I guess I’m thankful for that at least.
Chris

Most improved
There’s a lot of games as a service titles that could apply here, which is why I’m actually fairly positive about the idea in general – even if I don’t actually play that sort of a game a lot. Rainbow Six: Siege has gone on to amazing success since it’s original, unremarkable launch and is probably the most improved of any game other than No Man’s Sky.

I would vote for Sea Of Thieves though which I probably wouldn’t have played if not for Game Pass but I have come back to time and again despite everyone I know, who hasn’t played it, isn’t to me that it’s boring and there’s nothing to do. And every time I do come back it’s changed or added something new that keeps me going for days. The combat is still awful (I know that’s not the point, I just don’t know why it isn’t the point) but there’s now tons to do and quite a bit of variety.

Sailing a ship around the ocean with a full crew and taking down rival ships is really pretty amazing and not like anything else in video games. I’d love a sci-fi version where everyone has their own stations, like in Star Trek. I mean, who doesn’t like space pirates?
Hobbie

Complete the trilogy
I’m not sure whether Star Wars: Battlefront 2 is considered a good game by the majority but I certainly think it is, especially compared to what it was when it start. In fact, it may be the ultimate example of a game that started out terrible but recognised its failings and turned things around through DLC.

It couldn’t have had a worse start with all the controversy over the lootboxes but to EA’s credit they soldier on, never added microtransactions, and kept adding to all the modes, even the campaign. I agree the gunplay could be tighter but beyond that I think it gets things pretty spot and the graphics are still amazing.

I imagine there probably won’t be a sequel for a long time, or ever, because of the controversy and EA getting criticised for wasting the licence but I’d be up for another. It’s not a good Star Wars thing if it’s not a trilogy, after all!
Danse

Doomed opinion
Final Fantasy 13? No, ha ha! Everyone hates that one and with good reason. I am curious to see how Mass Effect 3’s reputation will change with the release of the remasters though, as I think it is almost as good as the second right up to the end – which I guess is beyond saving at this point.

My submission though is going to be Doom 3. Someone at Bethesda must like it because it keeps getting re-released and revamped but everyone I know considers it a boring remake of the first game, which I kind of get but don’t think is true (the remake bit, I mean, it’s not boring at all).

I found it both scary and a good shooter, which is exactly what you should have from a Doom sequel. The Doom reboot and Eternal are good games but they’re not scary and not even trying to be, and I think that’s a shame. Go on about monster closets all you want but Doom 3 constantly has me on edge when I’m playing it, and I’ve beaten it countless times. Great game.
Bento

Black sheep
It’s inclusion in Super Mario 3D All-Stars seemed to open the floodgates of hate on it but I’ve always liked the game. Maybe it’s just because it’s one of the first Mario games I played, and the first where I owned the console rather than my brother, but I find a lot to enjoy about it.

The consistent theme and the world hub is not something the series has really done before and I thought it worked really well. Plus, the void levels are great. The game does have a surprisingly big speedrun community, because it’s so difficult I guess, but other than that it often gets ignored or insulted. I’ll always like it though.
Baker

Modest and memorable
Although I think this isn’t the most likely example, I feel compelled to defend Shenmue and its sequels as games that are better than its reputation suggests. Even in 2000, it was a Marmite game considered either a masterpiece or utter rubbish (obviously, I fall in the former category). I do think that there has been a lot of rather unfair criticism of the game when viewed from a modern lens. I can appreciate that some people think the game has aged badly, but for me, I feel – with the odd bit here and there – that it’s aged wonderfully. The graphics still hold up rather nicely, the music is still beautiful, and there is still a sense of world building that is impressive to this day.

The Shenmue worlds aren’t the biggest, but – like Yakuza – its size betrays its depth to the point that, two decades on, I feel few games have matched. I have long since grown tired of gigantic open worlds and would rather have something more modest and memorable.

Its legacy as a forerunner to the open world genre and an important game in gaming history is secured, but I still feel that some people playing the game through modern eyes are missing the point when they say Shenmue is boring or is too slow. I do appreciate the second and third games giving you the option to skip time, but even then, I rarely feel like I need to use the option.

What’s very interesting is that only last week Sega uploaded a video on five tips to fully appreciate Shenmue’s charms and quirks. It’s interesting as the Shenmue I & II remasters were released over two years ago, so I’m not sure why they’ve done this now, but if it means that more people will give this game a chance, then I’m all for it. The series has been life changing for me and many others and deserves to be treated with more respect. #letsgetshenmue4
bcdcdude