What Can You Make In Dreams After A Week?

During our visit to Media Molecule’s offices last year for our November cover story, the developer stood firmly behind its intentions with Dreams: Create the most accessible and deepest video game creation tool available to a mainstream audience. It was a bold statement, but one that the various demos (and later, closed beta) showed that maybe the developer of LittleBigPlanet and Tearaway could pull off its wild ambitions.

The creation suite of Dreams is now out in Early Access, meaning anyone who pays $30 while spaces are still open for the game can get their hands on the full toolset. For the next week, I’m going to be taking Dreams for a spin, work diligently with the tools to see what I can create in that period of time. The goal here isn’t necessarily to create something amazing (wouldn’t that be swell!) but instead to see what someone with little-to-no game creation experience can do with those tools if they’re willing to put in the work.

Just so you have an idea of where I’m coming from experience-wise: I’ve created and released a few text adventures and a visual novel for commercial purposes. I understand a little bit of Python and have experience creating word-heavy games based on choice and consequence. However, I have never created art assets, have never made music, haven’t experimented with artificial intelligence, and have never dabbled in Unity, the Epic engine, or anything similar. I imagine I’m likely going to be stumbling a lot and will be writing frankly about my follies (hopefully my screw-ups prove amusing). At the end, what I hope emerges is a fairly accurate portrait of what one can expect if they take the deep dive into Media Molecue’s Dreams.

With that in mind: it’s showtime, folks. 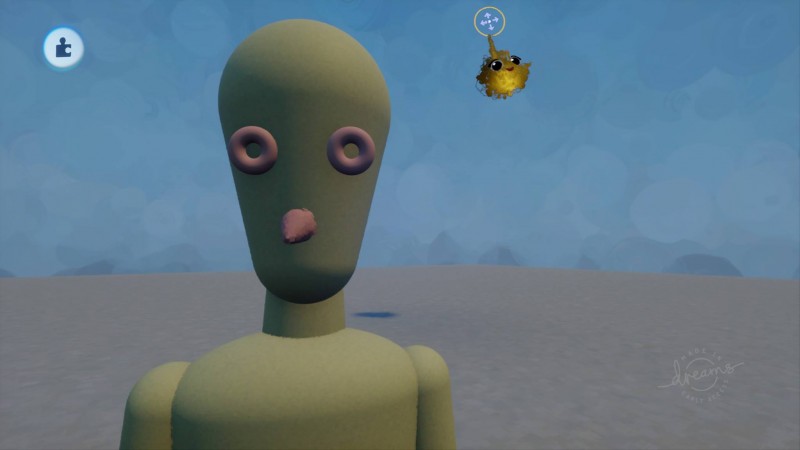 Day 1: The Land Of Tutorials

As soon as Dreams’ cutesy introduction sequence, letting you name your imp (the cute little cursor you’ll be using to manipulate the world) and teaching you the basics of moving the camera, I make a beeline for the creation toolset. My logic is that I already saw the ins and outs of how to move and manipulate objects in Dreams’ creation space during a few preview sessions at Media Molecule and thus should be fine learning on the go while messing with the tools.

I quickly pay the price for my arrogance.

Plucking a humanoid sculpture from the game’s huge collection of objects (both those made by Media Molecule and those crafted by Dreams users), I plant the body on top of the creation space’s huge tile of space. From there, I try to create shapes and shrink them down by manipulating the controller. However, this goes awry quickly for two reasons.

The first: Dreams’ shortcut interface is complicated, with you having to combine buttons like L1 with another to do certain things to objects (like shrinking them or spinning them in a space), so it’s easy to lose track of all the commands at your disposal. The second reason is that I’m just not used to literally moving around the screen yet. Unlike most games, Dreams requires you to navigate around the world using the motion control in your Dualshock controller. This makes sense because you’ll eventually be brushing objects, stretching them out, and manipulating them in other ways that are more suited to motion control than analog . However, my hands still get caught up in the unique scheme, my thumbs often pushing on a camera-controlling analog stick when what I want to do is move my cursor.

There’s really no way of getting around the motion control part except for getting used to it over time. However, Dreams’ commands and toolsets are so numerous and complicated that I quickly own up to the truth: there is no way I can skip the tutorials. I’m going to have to eat some vegetables before I get to the fun stuff. C’est la vie. 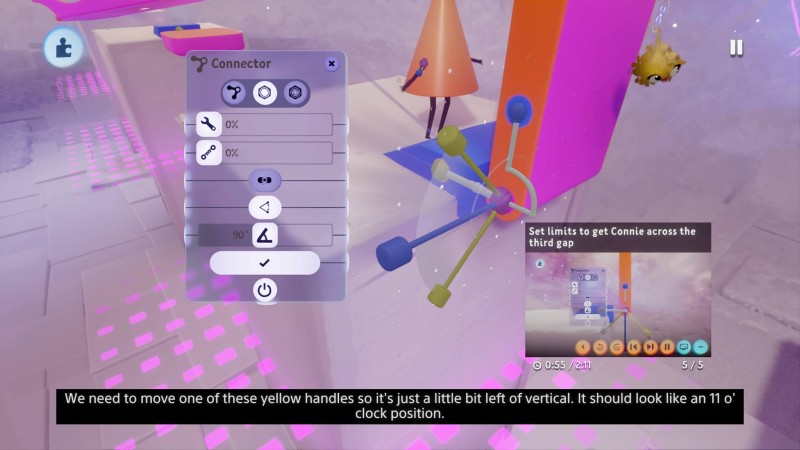 Heading over to the tutorial section, I see Dreams’ tutorials aren’t your bog standard tips or even quickplay videos showing you how to do whatever you want to do. Instead, Dreams’ presents its playable tutorials like a full on class for operating the game. There are several modules, filled with multiple lessons that average around 3-5 minutes, for basic things like manipulating the camera, sculpting objects, and creating artificial intelligence for your puppets (characters that you can fill your world with to either control or serve as NPCs).

It soon becomes clear that tutorials are going to be the rest of my night. However, the tutorials aren’t so bad. All of them are interactive, with you essentially watching a quickplay video that shows you how to do something and then following through on it yourself. Once you finish a lesson, it’s checked off, and you move on to the next one. And they are genuinely helpful too. Within the first four movement lessons, I learn shortcuts for zooming and manipulating objects that will make moving across the creation space less of a hassle.

As the lessons go on, I find myself less annoyed that I have take tackle these tutorials and more with the fact that I thought I could just bypass it all and learn on my own. Dreams’ toolset is ultimately generous in terms of how much it offers and how quickly it is to learn the ropes compared to taking several months or even years to learn C++, BASIC, Java, or an engine like Unity. Dreams is literally its own language: a set of procedures and elements that you can bend to express yourself in an exciting way. Of course there would be a learning curve.

My only concern now is that I hope that partaking in all of these tutorials pays off, especially when it comes to helping me commit maneuverability and manipulation functions to muscle memory, and that I can stumble just a bit less when I return to the creation space tomorrow, my head sloshing around with lesson after lesson on how to make the game of my dreams.

Check back tomorrow for day two of our adventures in Dreams!