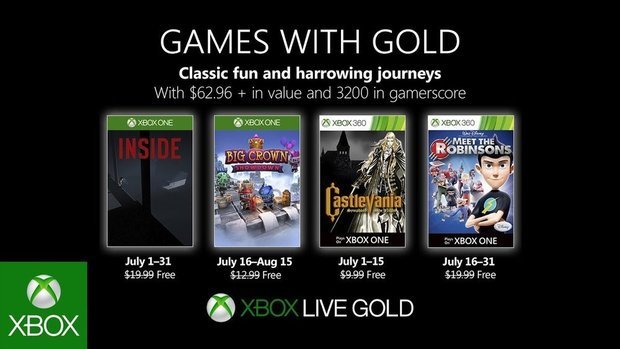 For the month of July, Xbox Live Gold members will receive four new free games – two on Xbox One and two on Xbox 360 – as part of the Games with Gold program.

You can play both Xbox 360 titles on your Xbox One with Backward Compatibility.

On Xbox One, Xbox Live Gold members can download INSIDE ($19.99 ERP) for free during the month of July. Big Crown: Showdown ($12.99 ERP) will be available as a free download from July 16th to August 15th.

Keep reading for more details about each game and the existing June Games with Gold titles.

Inside
Play the critically acclaimed and award-winning puzzle-platformer, Inside. Hunted and alone, take control of a young boy through creepy atmospheric environments, survive all forms of deadly traps and enemies and journey your way to the heart of a covert institute. What mysterious horror await?

Big Crown: Showdown
Your friends become your foes in Big Crown: Showdown. Compete for the crown in 4-player local or online multiplayer in three wacky worlds full of medieval shenanigans. Engage in frenzied fights and avoid perilous hazards in a fun and entertaining title for all ages.

Castlevania: Symphony of the Night
Dracula’s castle has risen again and it’s up to you to save the world from the nocturnal threat in Castlevania: Symphony of the Night. In this 2-D adventure/RPG platformer, battle the forces of evil, upgrade your armor and stats, and solve the mystery of what became of the previous hero, Richter Belmont. Solid non-linear gameplay and multiple endings make this cult classic a must-play.

Meet the Robinsons
Save the future by traveling to the past in Meet the Robinsons. Based on the animated movie, help Wilbur Robinson pursue the dastardly Bowler Hat Guy and his robotic hat, Doris, through time and thwart their evil plans. Armed with a collection of scientific gadgets, solve puzzles and battle your enemies to fix the time stream!

Throughout June Xbox Live Gold members can download EA Sports NHL 19 on Xbox One. Perfect timing to get your skills ready for NHL 20 which was announced earlier this week with Maple Leafs star Auston Matthews named as EA Sports new cover star.

Alternatively, you can pick up Rivals of Aether which we’ve personally never played but appears to have a fairly healthy review score on Steam and is once again available as a free download from June 16th to July 15th.

Unfortunately, if you were still hoping to grab Portal: Still Alive, you’ve missed your chance.

Like we always say, don’t hang about, these games won’t be available forever!