Deathgarden: Bloodharvest has all of the tools it needs to become a successful and thriving game. It has a fun central concept and an intriguing world of lore, and it comes from a studio that has successfully produced a long-running game-as-a-service in Dead by Daylight. Behaviour Interactive could have a hit on its hands with this title, but there’s one core problem the studio needs to solve, and it isn’t an easy one: How do you fix a game where some players are rewarded for using bad-faith tactics — especially when those mechanics allow you to win?

Deathgarden is an asymmetrical game that pits one invincible, lethal Hunter against a team of five agile, fragile Scavengers. A timer ticks down in the corner of the screen, giving the Hunter a comfortable amount of time to track and execute each scavenger. When the timer reaches zero, two doors open and the Scavengers can escape. The trick is that the timer isn’t supposed to tick all the way down too often. If the Scavengers turn in enough resources to pillars around the map, they trigger an end state where the exits open. If the Hunter executes every player except for one, the Hunter wins and the exits open.

A Hunter who downs several Scavengers and then begins to execute them gets far more experience and currency, which converts into upgrades between rounds. A Scavenger who turns in blood, marks supplies around the map for their allies, and escapes close chases from the Hunter, likewise earns more experience.

This is a perfectly good gameplay loop, and when everyone is participating in the game and playing in good faith, it’s fantastic. The problem — for both sides — is that the games can end in a frustrating way. A Hunter can instantly execute a downed Scavenger, removing them from the game. If that Scavenger is playing with friends, they’re left to watch for the rest of the round. This is an odd case, because it’s considered a dick move — why would you instantly execute someone and remove them from the game? — but from the perspective of a new Hunter, it often makes perfect sense. Of course you would execute them and remove them from the game. That’s how you win! 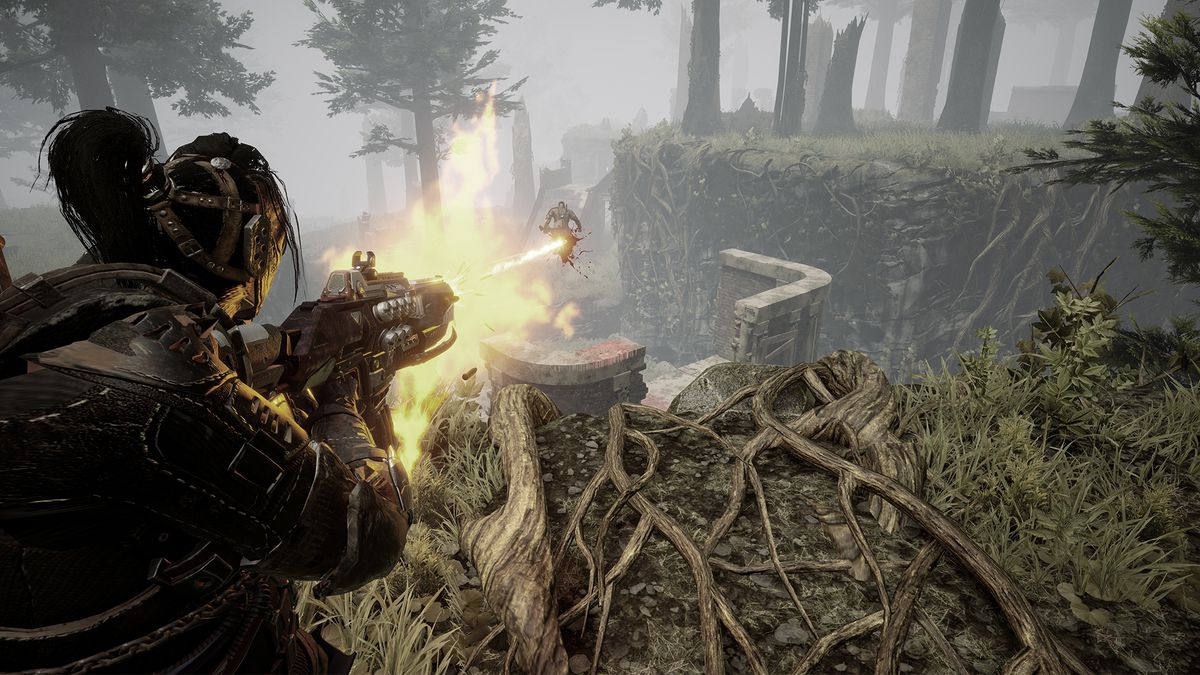 On the flip side, Scavengers who realize that they are down a teammate or two will sometimes crouch and hide in bushes or around structures. This means that the Hunter is no longer actively tracking prey based on their movements; they’re spraying random bushes with gunfire and activating whatever drone they can in an attempt to find someone who has been sitting very still for three minutes. This is a direct contradiction to the core concept of the game, which is a high octane, thrilling bloodsport.

Part of this problem comes from communication. Actively participating in the game, and succeeding at smaller goals, nets players XP … but many players are simply focused on escaping from the exits or executing Scavengers at all costs to ‘win’.

I spoke to Dreklo, a high ranking Hunter main with hundreds of hours in the game. He has less than a dozen hours as a Scavenger; he revels in the thrill of being a Hunter. He even mained Hunter before Deathgarden was relaunched in 2019; he’s a veteran of the first build of the game, which was dramatically different in execution. One thing he notes is that right now, as a Hunter, he can determine how each game plays out. Instead of an equal exchange between asymmetrical roles, he often feels closer to a circus ringleader or a role-playing dungeon master setting up combat encounters.

“[Behaviour] want the game to feel like a true hunt now,” he says. He notes that Hunters tend to be hit or miss — a player who comes from Dead by Daylight will often be surprised at the faster pace and more open pathing of the game, while a Hunter with heavy experience in FPS games can quickly pick the role up and dominate. “I control the whole game as a good Hunter.” 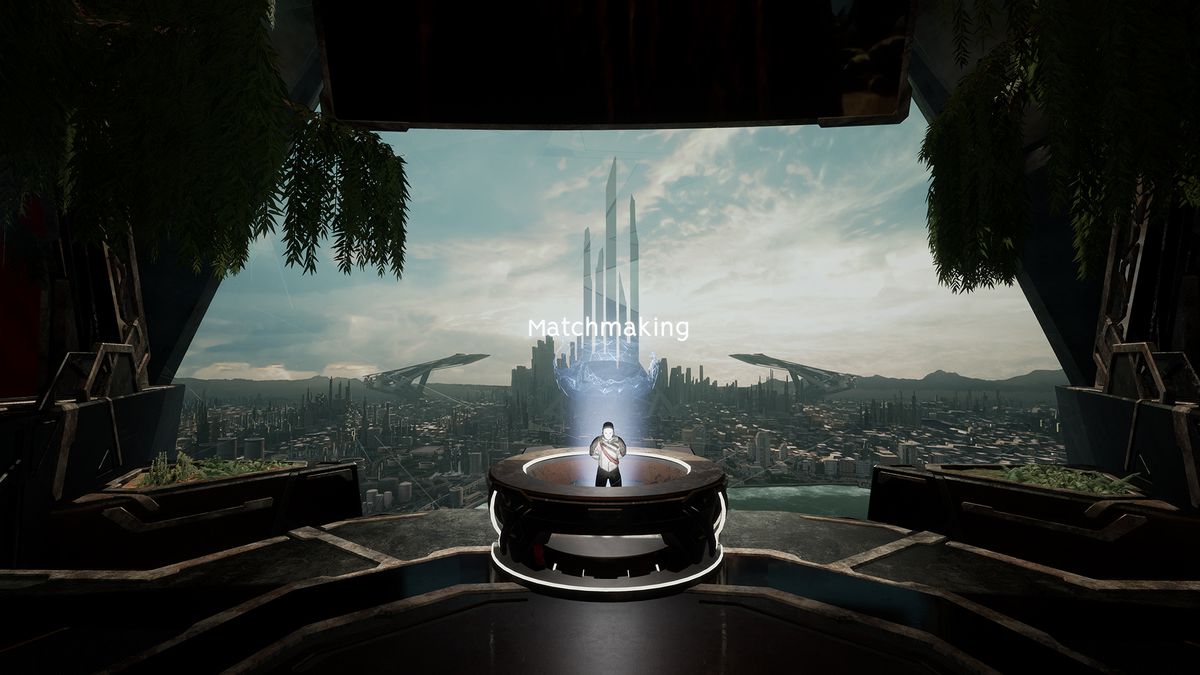 Dreklo cites something known as the “mercy rule.” If Hunters let downed Scavengers crawl away and get back up, they get a big XP bonus. If Hunters execute the Scavengers, Scavengers see that as the violation of an unspoken rule. Even Scavengers who aren’t tuned into the community discussion around execution will panic. “They start hiding. They start playing very conservatively,” Dreklo said. “[Early executes] are the worst experience, in my opinion.”

And so, when Dreklo plays, he deliberately plays with good faith. He lets Scavengers get back up, again and again. He alters his playing style so that the Scavengers feel like they can traverse the map. There’s just the right amount of danger — everyone on the map feels as though they are participating and playing in a game, not getting instantly stunted upon.

“I can be the director of every match, like my own movie,” Dreklo says. The Hunter is meant to be a power fantasy who controls the Scavengers, but right now that dynamic is far askew. Games in which everyone participates in good faith and do not violate unspoken community rules yield far more XP and currency, but many people have been trained by online games to focus on the end result of an individual round, instead of the greater path of progression. What matters to them is winning the round — or spiting an early executing Hunter — and not the climb to upgrade each skill and ability.

It’s easy to identify such problems, but harder to come up with solutions. Dreklo suggests that a tutorial that explains execution, XP bonuses, and progression in the game itself might be a great chance to retrain players. Many Deathgarden players who are serious about the game find themselves reading external sources, like Reddit, Discord, or player-written guides. Behaviour could reach these new players before the community does, and teach them how to best interact with their game.

Matchmaking is another issue. Occasionally, I recognize the name of a good Hunter I’ve played with before as I enter the arena as a Scavenger. The tone of the match is far different — I’m tense, challenged, and enjoying myself. Other times, I’m matched against a brand-new Hunter, and I can traverse the map as I will. It’s tough to tell how a match will turn out. Each round is less than 10 minutes, so it’s not as though I’m sinking time into unsatisfying games, but I am continually rolling the dice on what kind of Deathgarden experience I’ll be having.

Deathgarden: Bloodharvest does have time to figure these issues out. The team has solved similar problems in Dead by Daylight, and Deathgarden is still in early access. That being said, time is always an issue. This is the game’s second outing after a relaunch, and retaining a player base is crucial to maintaining the game’s momentum. Before Deathgarden can truly bloom, Behaviour will need to solve this core problem.