Gears 5’s multiplayer is tough, but a small audio tweak makes it much easier

After a few hours online with Gears 5, I know two things to be true. First, I’m terribly rusty with the shotgun; I’m confident that there are steaming chunks of my character smeared across half a dozen Twitch channels at this point. Second, and more importantly, the sound design is absolutely fantastic. In particular, the surround audio integration has never been better, making a good audio option nearly mandatory for competitive play.

The best part is it doesn’t demand fancy, expensive headphones. After trying the game wih the latest set of Astro A40s, I switched out to a relatively basic pair of stereo cans attached directly to the Xbox One controller and, thanks to the software-based nature of Xbox’s Dolby Atmos integration, the effects were similar. No, the audio’s not quite as rich and varied as with the more expensive headphones, but it’s certainly better than stereo.

Here’s why I recommend you at the very least add Atmos to your Xbox before diving into multiplayer matches. 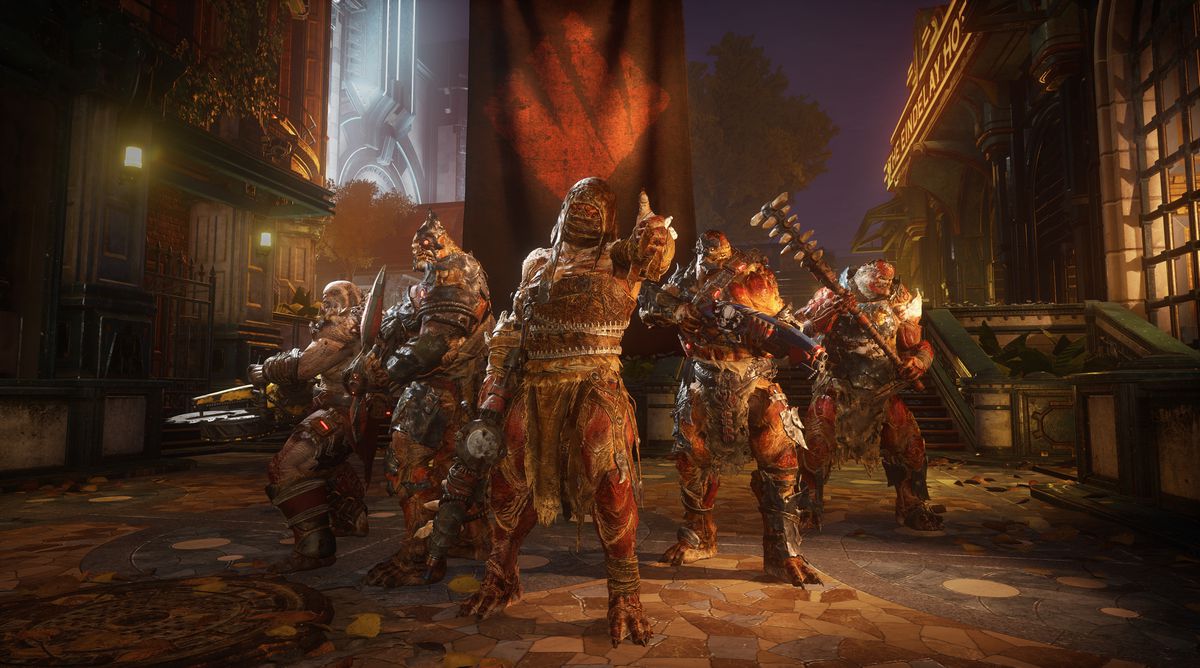 There is a pace and a flow to the movement in a Gears multiplayer match that hasn’t changed over the years. The maps are comparatively modest, and the running speed (outside of wallbouncing) has always been a little pokey when compared to other multiplayer shooters.

As a result of this compact, almost claustrophobic battleground, the soundscape slowly orbits the player character as they fight. It’s a completely different audio experience compared to the single-player campaign of previous entries, which, due to the linear nature of levels, often sounded sounds just fine in stereo.

So yes, Gears multiplayer has always been good at enveloping the player. But with Gears 5, it feels as if the multiplayer soundscape has been even further improved. The game itself seems to have a cadence to it that I’ve never experienced in previous titles. There’s a staccato rhythm to the barks, to the footfalls, and to the gunfire that’s almost hypnotic. Over the course of several matched I developed a sense of what that rhythm should sound like. When it was off I knew something was wrong. Perhaps a different weapon was firing. Once it was an ambush and, later, a sign that several members of the enemy team had suddenly logged off only to be replaced by bots.

This soundscape is the collection of many small tweaks and improvements. The audio palette is deeper, with more sounds emitting from the environment. Character barks have an enhanced resonance, echoing differently depending on where players are on the map. It also feels as though there are types of surfaces than in previous games, each with their own tone and timbre for gunfire, ricochets, and footsteps.

Just like in previous Gears titles, surround sound meant that last night I could get a bead on the enemy long before I could see them. But, I could also tell with much greater accuracy how far away they were and what direction they were moving in. The result was a kind of tactical stealth gameplay that I haven’t experienced since Gears of War 2. Most importantly, the soundscape reacted fluidly and accurately depending on where I was facing in real-time. I could detect elevation as well, likely due in part to the game’s Dolby Atmos integration.

Is Gears 5’s audio worth an extra investment?

I have a bit of history with the sound of the Gears of War franchise. Back when I started shopping for the Xbox 360, audio solutions were a big part of the equation for me. I got very invested in surround sound at the time. I bought a high-end receiver with its own calibration system and an expensive set of 5.1 speakers within months of picking up a console. But, wouldn’t you know it, other people don’t seem to enjoy hearing the sound of chainsaws, gunfire, and screaming late into the night. So I had to come up with a different solution.

That’s when I discovered the world of surround sound headphones. My first pair, the venerable Tritton AX 360s, cost me a pretty penny. But they had an optical port, Dolby audio, and five different drivers inside each earcup. Playing the original Gears of War with them on felt like having a superpower. Suddenly, I could tell the rest of the players on my team roughly in which direction the enemy was based on nothing more than the sound of their footfalls.

Fast-forward to 2019. My audio options are better and cheaper. You can download a 30-day free trial of Atmos to your Microsoft account (for both Xbox One and Windows PC). Once it expires, if you opt to keep the app, it will cost you an extra $15.99. But, it’s a small price to pay compared to high-end headphones.

The super powers granted by top-of-the-line surround sound feels more essential than ever before. Playing Gears 5 multiplayer for the first time last night, I was absolutely blown away. I can’t imagine playing this without decent headphones or the Atmos support.