Imperator’s real-time historical sandbox gameplay is probably most comparable to Europa Universalis 4 at its heart, but it weaves in strong ideas from many of Paradox’s other games as well: population units from Victoria, characters and traits from Crusader Kings, and army automation from Hearts of Iron. There is a lot to keep track of, even for a Paradox game, to the point where it can feel a bit messy. But Crusader Kings 2 remains my favorite strategy game ever partly because it’s messy; Imperator feels like a return to a messier age of Paradox games, which is honestly refreshing in a way – except that the interface doesn’t keep up with the times.

And this trip to the ancient past doesn’t seem especially interested in holding your hand as you learn the ropes, either. The in-game tutorial leaves out some key information, coming across kind of like a driver’s ed course that teaches you what all the pedals, knobs, and switches in the cab do but not how to parallel park or merge onto a highway. It also only covers playing as a republic, leaving you to your own devices when it comes to tribes and monarchies.

Let Slip The Dogs of War

Imperator treats you to one of the most involved and interesting combat systems I’ve seen in the genre.

Once you do get up to speed, though, Imperator treats you to one of the most involved and interesting combat systems I’ve seen in a genre that’s usually dominated by crashing giant balls of infantry into each other with winning or losing based on who can bring the greatest numbers to bear. In addition to a plethora of troop types that ranges from infantry to chariots to mounted camels and elephants, each army has access to a set of stances that can counter or be countered by others. Their effectiveness is determined by the troop types in an army, so you can tell what tactics an opponent is most likely to use by scouting out how their forces are composed. If you see a lot of light infantry on the march, they’re probably not going to use shock tactics, and those Scythians and their horse archers are potent but predictable. It’s tactically interesting and rewards observation and planning, rather than settling with a lame, guess-based rock-paper-scissors system.

The map also lends itself to interesting warfare, with a density of traversable terrain far above and beyond most other grand strategy games. Fighting across the Alps involves a frigid slog through narrow passes that’re just begging to be the scene of a brutal ambush or desperate last stand. Similarly, the Nile region is modeled as the ancients would have seen it: a narrow highway along the banks of the great river, surrounded on all sides by expansive desert where only death awaits. Some areas of the map will remain unconquered well into the late game for the same reasons they did in history: it’s simply not worth it to undertake such a major logistical nightmare for so little reward. This approach to keeping some regions balkanized adds to the immersiveness of the world without making you feel like you’re missing out on anything. The strategic and tactical depth makes it hard for me to go back to a game like EU4, and all of this map detail looks gorgeous whether you’re marching across the pastoral plains of Italy or over the rugged Himalayas.

I Am The Senate

Politics and warfare tie together very nicely through the popularity and loyalty systems. In a republic, leaders are elected in part based on a popularity score that will go up or down over time from various events, but most notably from winning battles as the leader of an army. This means that you have to be careful when appointing a general because the candidate with the best military stats might be an incompetent governor – or worse, a rabble-rousing populist – who you don’t necessarily want coming home in triumph and riding a wave of victorious glory into the halls of power. (What could possibly go wrong?) In addition, I often found myself having to choose between highly talented but corrupt candidates to fill a command, or far less skilled ones who wouldn’t be skimming from the budget under the table. It’s a great driver of character interaction that models the administration of a bureaucratic empire far better than anything Crusader Kings 2 ever came up with.

In addition, troops that serve under a given commander for a long time – particularly if that commander is charismatic or generous – will become loyal to their general over the state and refuse to leave their service. Once a certain percentage of your troops are loyal to such a commander (or group of commanders with similar grievances, like maybe a triumvirate), they may decide to start a civil war if their loyalty is low. Thus, you’re constantly presented with the challenging and historically authentic balancing act of giving your superstar leaders enough honor and victory to keep them happy, but never enough that their popularity captures enough hearts and minds to make them a threat to your regime. It’s particularly difficult for tribes, in which each clan chief can raise a retinue that will always be loyal to them no matter what. This is the kind of internal politicking that’s missing from a game like EU4, and Imperator is very much the better for it.

This is augmented by the tyranny mechanic, which allows you to act against the will of the nation at the expense of building up general distrust among your people. It can sometimes be worth it to push your demands through a hostile Senate in a time of crisis, but doing so too often will eventually lead to disloyalty and open revolt. Continued abuses may even put you in a position where your rivals give you the choice to back down or cross the Rubicon and fight a war to make your absolute authority official. This is a really clever and effective way to avoid tying your hands with complex government mechanics, but still forcing you to pay a price for ignoring them blatantly.

The one aspect of the tribal experience that does work well and make them exciting to play is a system of centralization and civilization that allows you to gradually transition into a settled republic or kingdom, replacing your egalitarian tribal population with a more stratified and specialized society that can compete with the great powers of the Mediterranean core. Every small, incremental step you take away from mud huts and toward marble temples presents some kind of interesting trade-off, and it really feels like your nation is evolving gradually instead of waiting to push a button that radically reforms everything overnight.

Regardless of which nation I chose, I was impressed by the amount of customization available in Imperator.

Regardless of which nation I chose, I was impressed by the amount of customization available in Imperator. Most of the tedious budget sliders from other grand strategy games have been replaced by more nuanced economic policies that offer clear trade-offs and get rid of needless, fiddly bean counting. Do you want a trade policy that focuses on income from commerce with other nations, or one that mostly benefits your domestic production power? And, once you get some trade going, it’s possible to use import and export routes to stack powerful bonuses on each of your provinces. Importing grain boosts your population growth. Getting access to iron allows you to build powerful heavy infantry. Having a surplus of leathers makes your light troops more effective in combat.

Since every province’s trade slots are limited, this feels like creating a talent build for each one. Augmented by appointing governors and selecting an overarching policy like cultural assimilation or maximizing taxes, each chunk of your empire can be highly specialized and develops a sort of personality of its own. Further demanding challenges can arise, though, if a governor you appoint becomes corrupt or cruel. An unhappy populous can lead to a local revolt, which is the other means besides character-led civil wars that Imperator uses to drive interesting internal tension.

By the time you actually figure out where the real Spartacus is, you might have quite the daunting fight on your hands.

A lot of Imperator’s best storytelling comes from its pops, though. An event that gives you a chance to free some slaves sounds great, but it could significantly hinder your economy and upset local landowners. Refuse to emancipate them, however, and you can end up with a slave revolt that will even cross national borders to free other countries’ slaves and swell their numbers. By the time you actually figure out where the real Spartacus is, you might have quite the daunting fight on your hands.

Acquiring slaves can be a major driver of conflict too (as it was historically), since you can’t just decide to enslave free people under your own jurisdiction. If you need to grow your economy faster than your existing slave population can breed, warfare and sacking cities is the only way to do so. It’s not only possible but sometimes advisable to declare wars just for this purpose, even if you don’t have your eyes on your neighbors’ land. Generating realistic objectives for a classical conqueror organically, without simply giving you a mission, is a major strength of Imperator’s core systems. 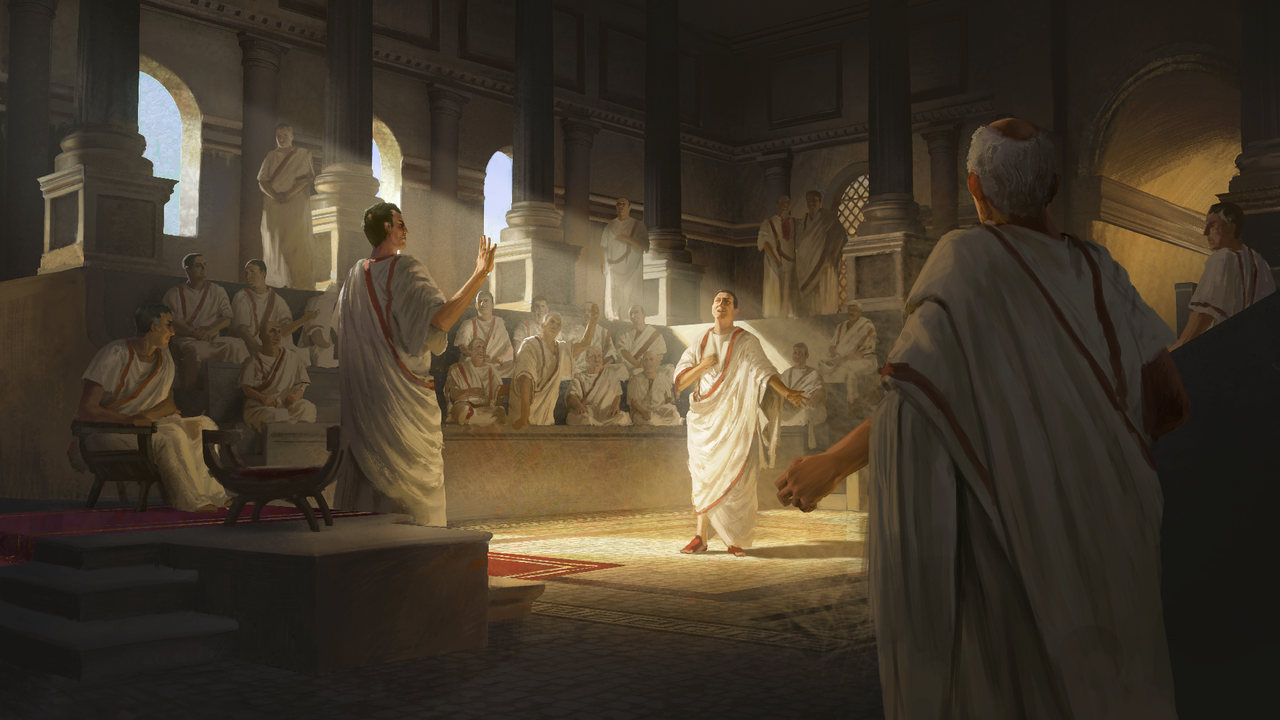 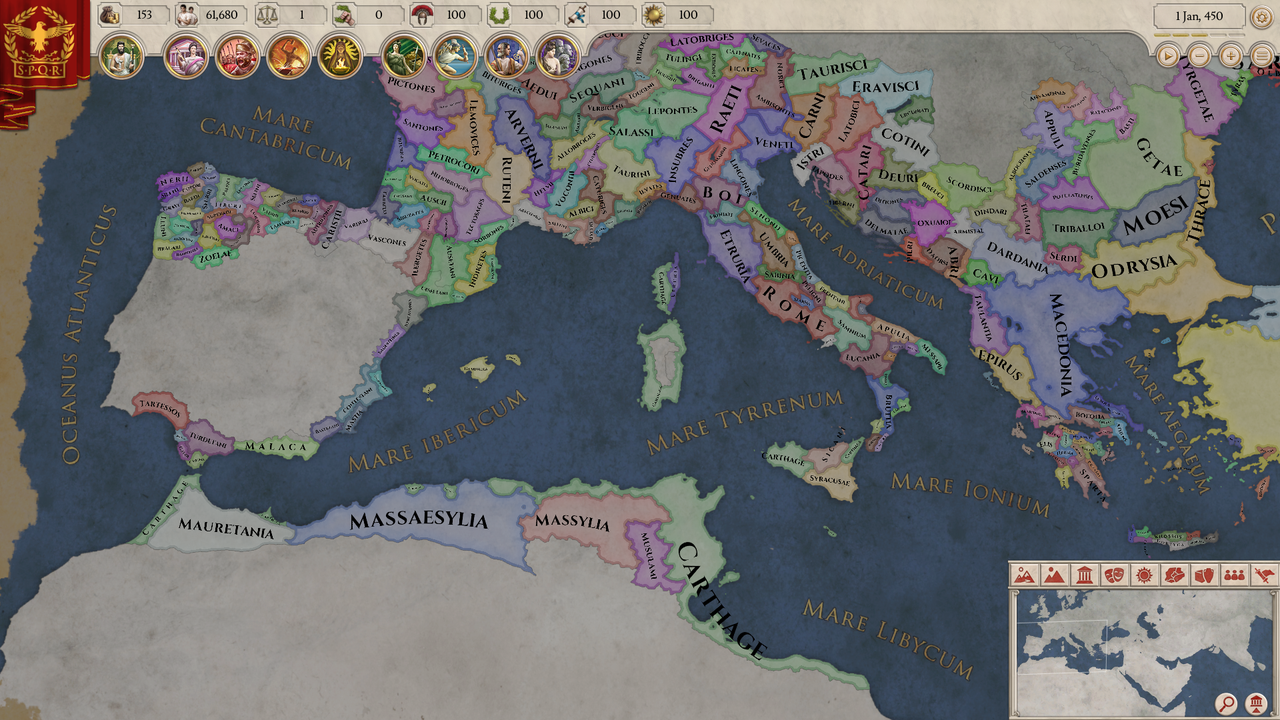 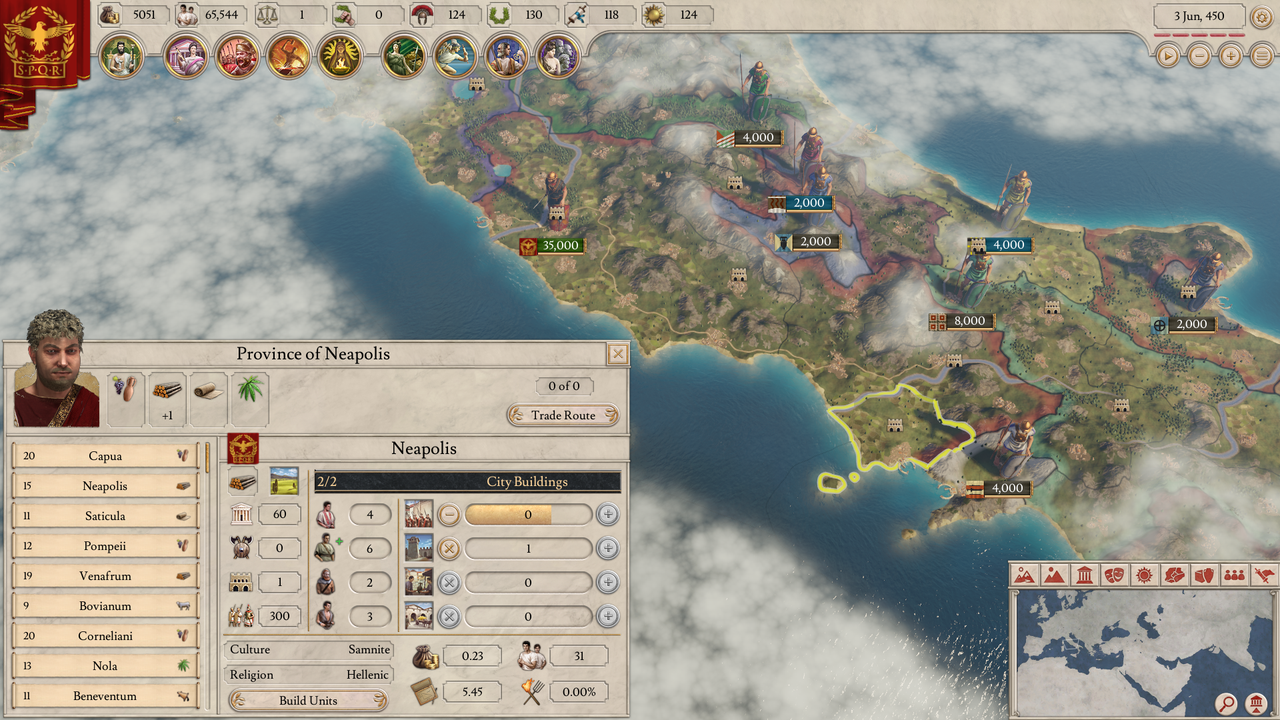 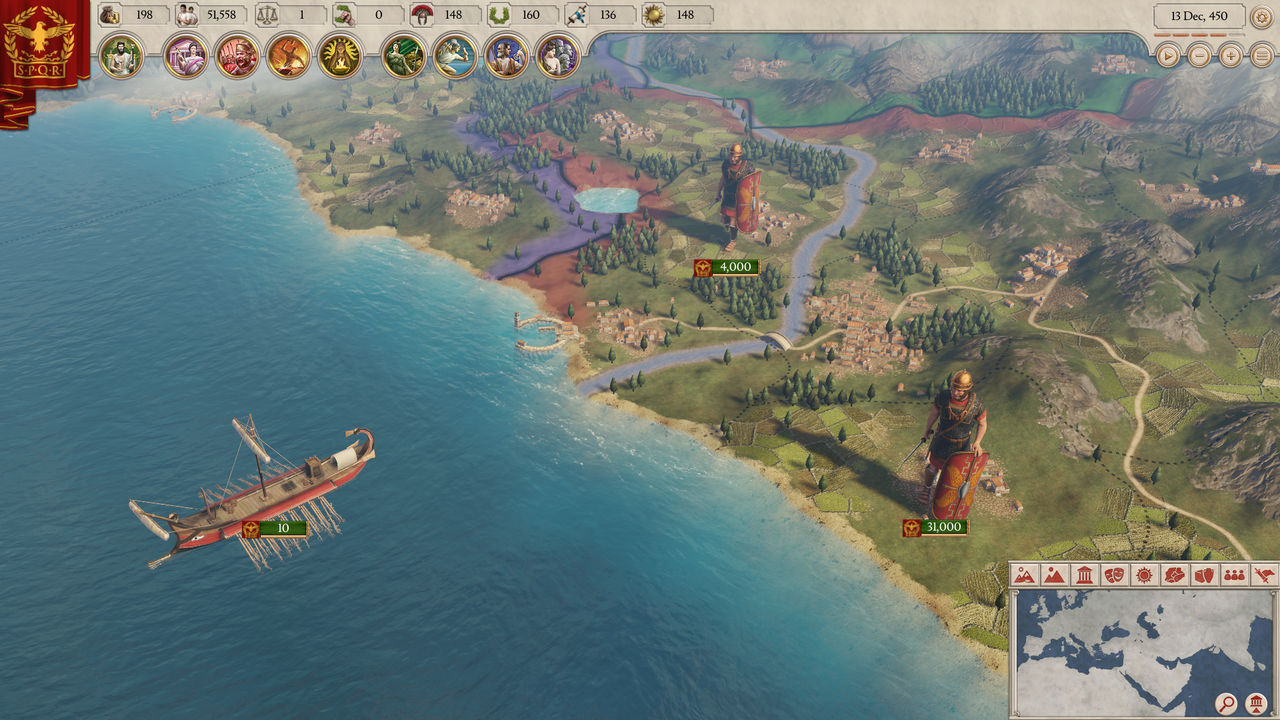 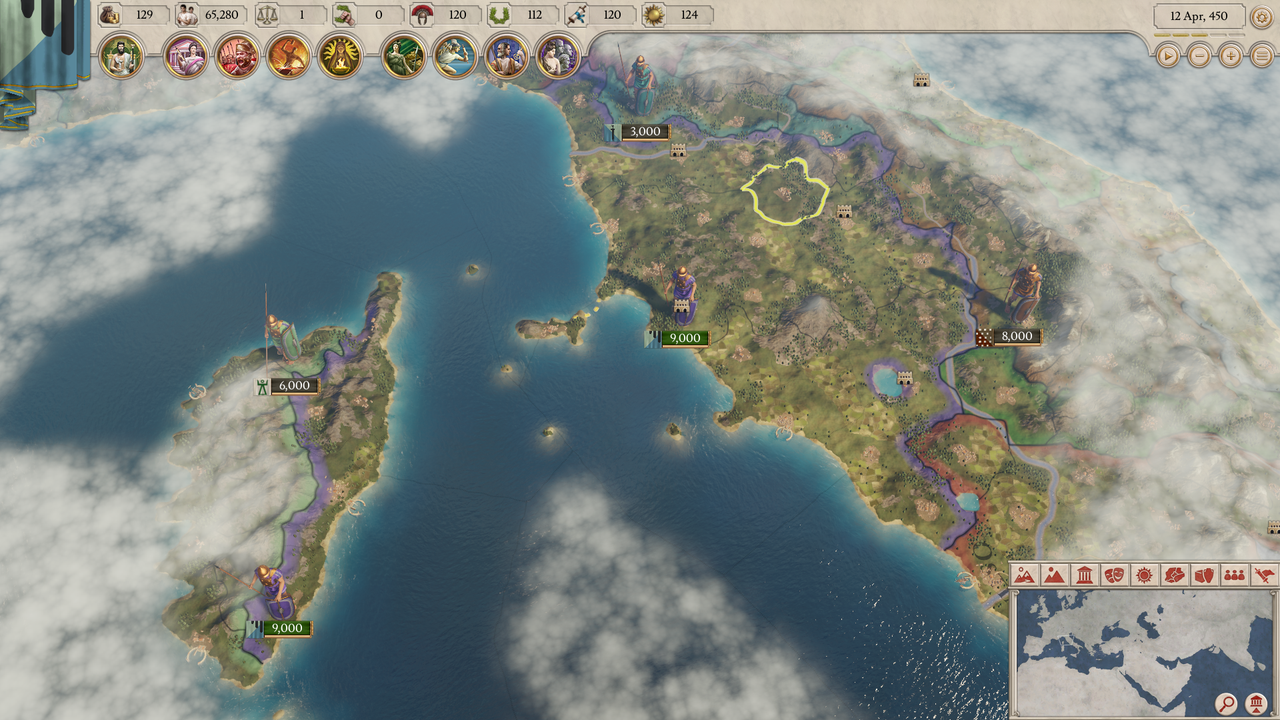 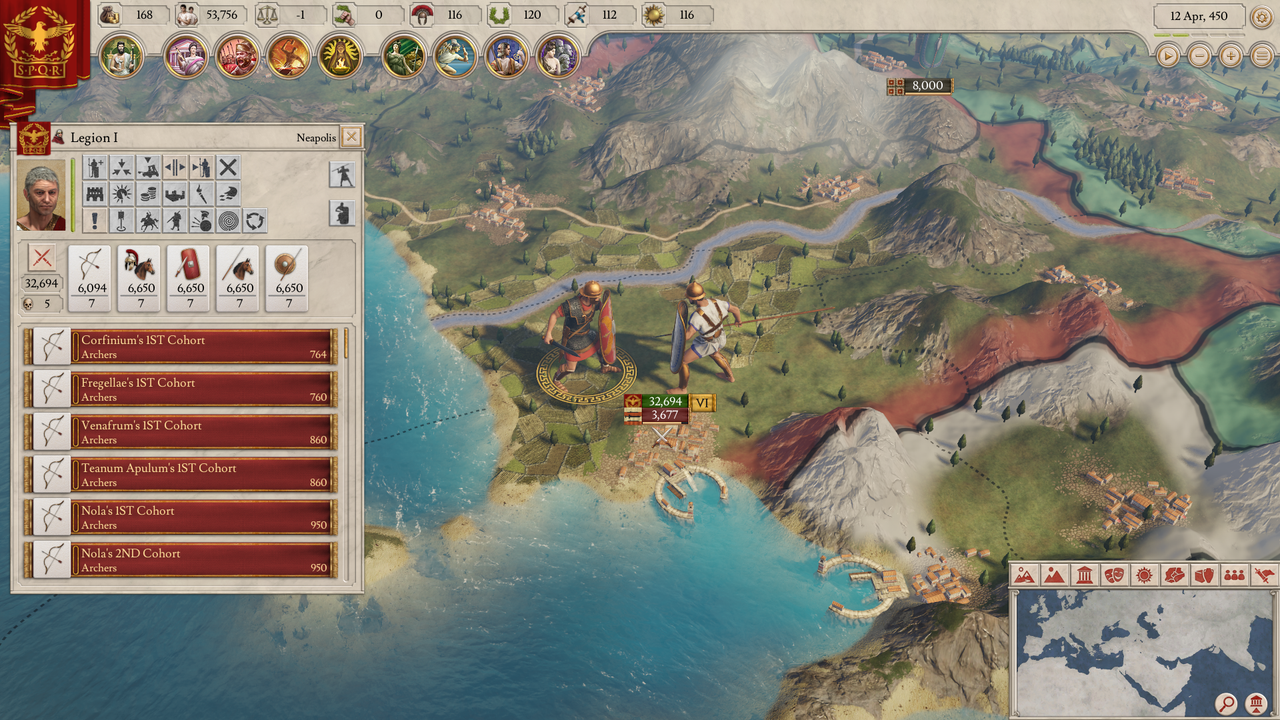 The amount of detailed, strategic stuff crammed into Imperator: Rome is equal parts impressive and daunting. It can come across at some times as rich and rewarding, and other times as crowded and chaotic. I suspect I’ll still be discovering new things about it even a hundred hours in, but it’s a testament to the strong warfare and politics, and to the outstanding map, that I’m eager to play another hundred hours or more. I only wish I didn’t have to struggle with a subpar interface and undercooked tribal mechanics along the way.